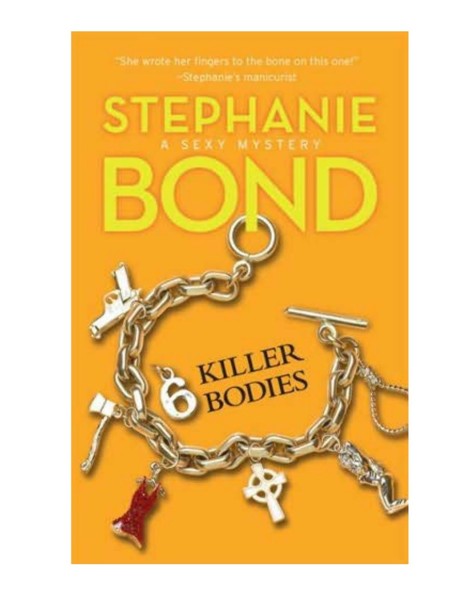 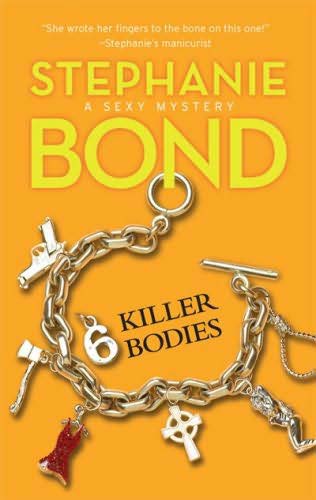 “Carlotta, this isn’t your fault.”

Carlotta Wren turned her head to look at Detective Jack

Terry, who was dividing his attention between her and

north to Buckhead so Jack could drop her off at Peter

Ashford’s home. She was stil reeling from watching her

good friend Cooper Craft be arrested as The Charmed

Kil er, a monster who had murdered nine women, leaving

a charm in the mouths of his victims as his signature.

There was only one problem: Coop wasn’t a serial kil er.

“I know it isn’t my fault.” Carlotta dabbed at her wet eyes

with the handkerchief Jack had given her. “Because it’s

He frowned. “Mine? How do you figure that?”

Neiman’s.” Carlotta worked at the store as a sales

associate, although lately not up to her potential,

as an on-again, off-again body mover for the county

morgue. “Insinuating” herself into police investigations

Jack’s mouth tightened. “It was better for Coop to be

taken into custody sooner rather than later, and in a public

place. At least no one was hurt.”

in front of him. “Damn traffic. Where the hel are all these

The way Jack deflected her question made her wonder if

he thought the GBI had arrested the wrong man. “Jack,

His jaw hardened. “It doesn’t matter what I believe. I’m

not on the case, remember? But trust me, the GBI

wouldn’t have made an arrest without evidence.”

“What kind of evidence?”

“I don’t have specifics.”

me that the state crime lab was supposed to return DNA

Jack frowned. “Why would Bruce Abrams be talking to you

“Because he knows Michael and I are…connected.”

Michael Lane, her former coworker, was on the run after

committing some pretty heinous acts himself, including

trying to kil Carlotta and, after escaping from a hospital

mental ward, stalking her. Until Coop’s arrest, Michael had

been the primary suspect for The Charmed Kil er.

And Michael was stil out there somewhere.

“Plus,” she continued, “I played the sympathy card by

potential suspects, thanks to your crackerjack profiler,

Detective Marquez.” She gave Jack a wry smile. “I’m sure

she’s behind Coop being fingered as The Charmed Kil er.”

“Regardless of the outcome, Maria is just doing her job.”

“Do you know, she actually warned me about the men I let

into my life? I thought she was talking about you.”

He gave a rueful laugh. “Not bad advice, considering who

with him until things settle down.”

“I wouldn’t use the word ‘happy.’ I thought you’d be safe

with him. But that was before Ashford bought you that

“It was a scooter, Jack. And it was a thoughtful gesture

considering I didn’t have transportation. Now I’m back in

the same spot. I don’t suppose you’ve found the person

who planted the explosive under my Monte Carlo?”

“Do you stil think it was Michael?”

“Who else could it have been?”

Jack shifted in his seat. “Coop.”

would never do something like that. Why would he want

“When your car blew up in the mall parking lot, you told

you allegedly paid him a—” Jack took his hands off the

wheel to draw quotation marks in the air “—visit. I can’t

ignore the fact that Coop had a window of opportunity to

“When I allegedly paid Coop a visit?” Carlotta shook her

head. “Jack, if you want to know if I slept with Coop, or

with Peter for that matter, why don’t you just ask me?”

“Because, as you so often remind me, it’s none of my

business.” Then he nodded to her lap. “What’s that you’re

She glanced down at the mangled piece of paper, feeling

sick all over again. Just before his arrest, Coop had brought

on a sample of Wesley’s hair. The report stated that her

her worst fears. When she’d confronted Wesley about

her he’d only taken the drugs temporarily to alleviate the

pain he’d experienced from when one of his loan sharks,

The Carver, had cut part of his name into Wes’s arm.

But the drug test indicated a more pervasive

problem…didn’t it? Coop had said over the phone that he

wanted to explain the test results to her in person. But

before he’d gotten the chance, the GBI had descended and

“It’s nothing,” she murmured, pushing the paper into her

purse. If Wesley was caught taking drugs, his probation

would be revoked. All this time, she’d been worried about

keeping her brother out of jail, and now, inconceivably,

Coop was in lockup. “What’s going to happen to Coop?”

Jack sighed. “He’l be arraigned within a few days.”

“That depends on how good his attorney is, the mood of

“Right. Since this is the biggest case Fulton County has

seen in a while and since one of Lucas’s A.D.A.’s was

murdered, I’m sure he’l handle this case himself.”

She touched her throbbing forehead. “I can’t believe this is

happening. The idea of Coop being The Charmed Kil er is

Jack clenched his jaw. “Right now, jail is the best place for

him to get sobered up and dried out.”

The vision of Coop in a cold, empty cel made her lungs

squeeze. He must be feeling dazed and utterly confused.

Jack leaned on the car horn, which was ridiculous

considering traffic was at a standstil . “This is bul shit.” He

dashboard, then switched on the blue light. Begrudgingly,

“Are you taking advantage of your position as a law

enforcement officer to get around traffic?”

“You bet your sweet ass I am.”

He pul ed ahead, slowed at a red light, then proceeded

through when the coast was clear.

“You’re only making it worse for everyone else.”

Carlotta observed Jack under her lashes. His rugged

features and big body were rarely at ease, but a muscle

worked in his jaw, and his grip on the steering wheel was

more fierce than necessary. Despite the fact that he’d

given Coop up to the GBI, Jack, too, was disturbed about

the arrest. But was he disturbed because he’d been duped

by someone he considered a friend of sorts, or because he

But if Jack thought Coop was innocent, why would he give

him up? Because he couldn’t resist being part of an

investigation he’d been dismissed from?

She knew the detective wel enough to know that he

his, not if he thought she might go off on her own tangent.

She’d have to finesse information out of him.

Jack nodded. “He was drunk when he stopped at the scene

of an accident and declared a woman dead when she

wasn’t. Frankly, Coop was lucky he was only stripped of his

title as Coroner and had his license to practice medicine

because of Coop’s negligence, he would’ve been looking at

serious time. It doesn’t take a psychiatrist to see how

something like that could mess with a person’s head.”

“But he seemed to be dealing with everything okay,”

Carlotta said. “I didn’t know him when it happened, but

Coop seemed at peace with working for his uncle at the

funeral home, and moving bodies for the morgue.”

“Not without a reason,” she insisted.

“Everyone has a breaking point,” Jack said. “It doesn’t

have to be a major incident.”

She was tempted to let Jack in on what her brother,

Wesley, had told her about fol owing Coop to a

neurologist’s office, and their concern that Coop was sick.

But their suspicions were mere conjecture, and Jack had

already betrayed her confidence by informing the GBI

when she’d called to let him know that Coop, who had

been missing for a day, was on his way to see her at

Neiman’s. She wouldn’t be so forthcoming with

information the next time.

conversation, she gathered he was talking to his partner,

Maria, who needed a ride somewhere.

“I’l be there as soon as I can,” he said, and Carlotta

thought she detected a note of intimacy in his voice.

The GBI had kept Maria on The Charmed Kil er case, but

had removed Jack, partly because of his association with

Carlotta, who had been indirectly connected to some of

the victims—either as a body mover on the crime scene, or

a passing acquaintance. And the last body had been a

speed bump for her scooter. She hated that Jack had to

maintain his distance from the investigation just because

she’d been implicated in the crimes. Now that an arrest in

the case had been made, she assumed Jack and his

gorgeous partner would be reunited.

Not that she cared if Jack and Marvelous Maria were

sleeping together. Okay, maybe she cared a little. Carlotta

and Jack had rol ed around a few times, but Jack was his

own man. And she was supposed to be giving her

relationship with Peter a fair chance. She and Jack had

agreed to stop fal ing into bed with each other, yet their

Jack Terry managed to push every emotional button she

and admired him. Right now, she desperately wanted him

to tel her that everything was going to be okay, but she

was terrified to ask.

Instead she nursed the ache in her chest and watched out

the car window as the houses became increasingly posh

until Jack slowed at the entrance of Martinique Estates. He