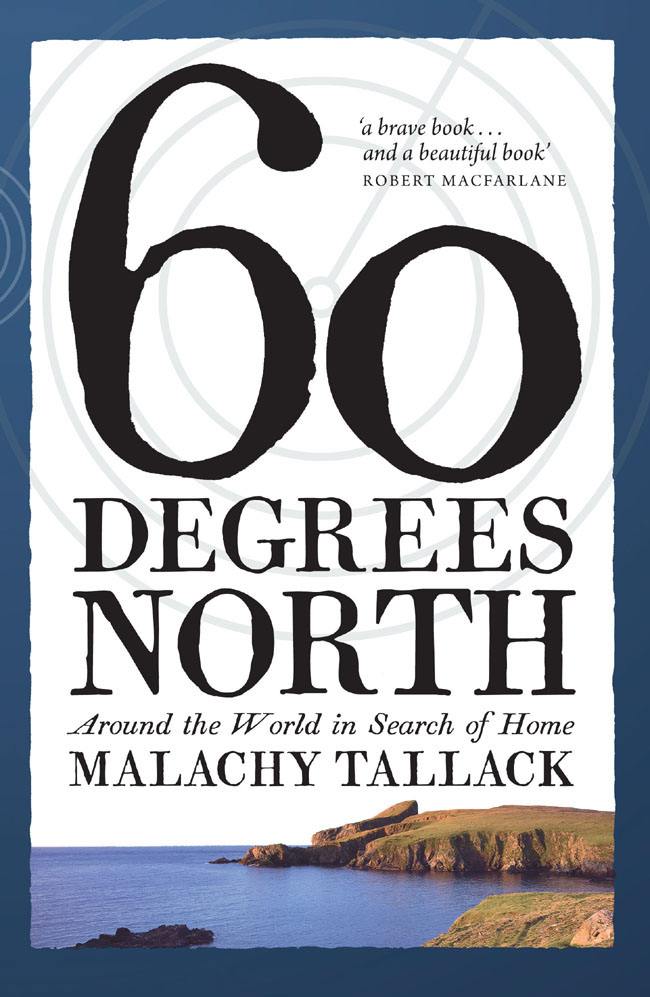 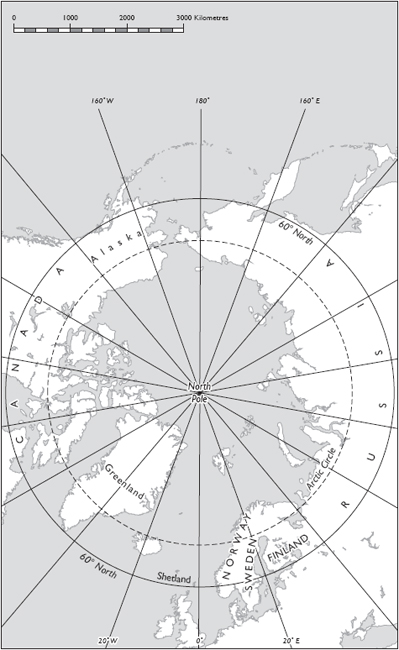 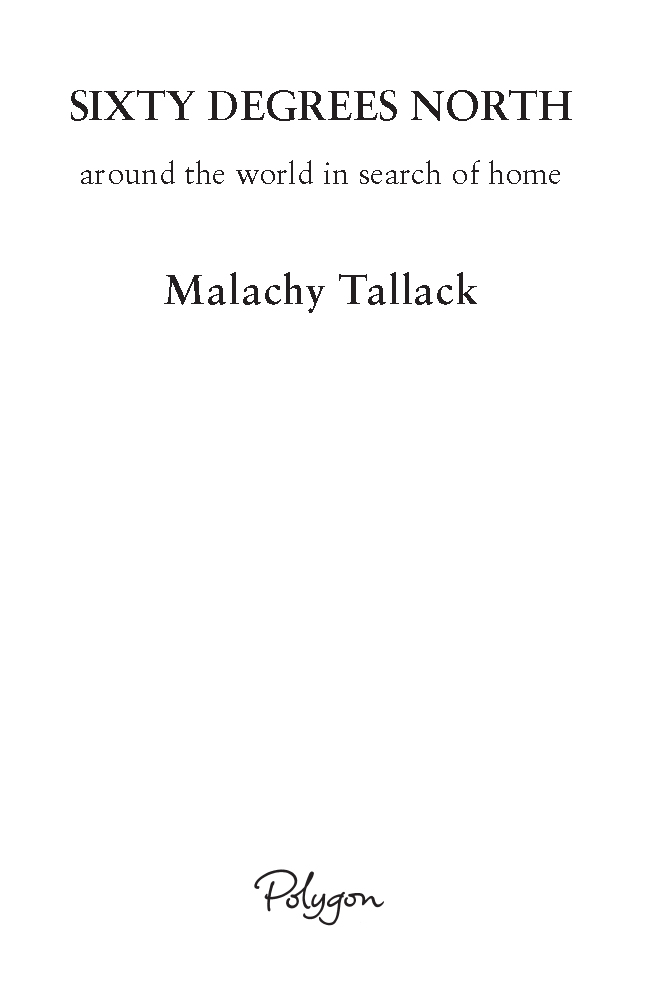 Extracts from
Sixty Degrees North
have previously been published in
Irish Pages
,
PN Review
and
Earthlines

The right of Malachy Tallack to be identified as the author of this work has been asserted by him in accordance with the Copyright, Design and Patent Act 1988.

All rights reserved. No part of this publication may be reproduced, stored, or transmitted in any form, or by any means, electronic, photocopying, recording or otherwise, without the express written permission of the publishers.

Typeset in Sabon at Birlinn

Canada: pelicans on the Slave River

Finland: the Old Town of EkenÃ¤s

I can remember the day: silver-skied and heavy with rain. It was early winter and I had just turned seventeen. The morning had been spent in bed, sick and sleepless, but by lunchtime boredom made me move. I stood up and shuffled towards the window, pulling a dressing-gown around my shoulders. The house in which I spent my teenage years faced east over the harbour in Lerwick, Shetland's capital town. From my room on the second floor I could see out onto our little garden, with the green picnic bench and the wooden trellis set against a low stone wall. Beyond, I could see fishing boats at the pier, and the blue and white ferry that chugged back and forth to the island of Bressay, just across the water.

Shetland lies at sixty degrees north of the equator, and the world map on our kitchen wall had taught me that, if I could see far enough, I could look out from that window across the North Sea to Norway, and to Sweden, then over the Baltic to Finland, to St Petersburg, then Siberia, Alaska, Canada and Greenland. If I could see far enough, my eyes would eventually bring me back, across the Atlantic Ocean, to where I was standing. I thought about that journey as I looked out over the harbour, half-dressed and shivering. Though I'd never travelled anywhere at this latitude before, I imagined then that I could see those places from above. I felt myself carried around the parallel, lifted and dragged, as though connected to a wire. The world turned and I turned with it, circling from home towards home again until I reached, inevitably, the back of my own head. Dizziness rose through me like a gasp of bubbles, and I fainted, briefly,
landing on my knees with a jolt on the bedroom floor. Exhausted, I hauled myself back up again and into bed, and there I fell asleep and dreamed my way once more around the parallel. That dream, that day, never left me.

A few months earlier, my father had died. He left me one morning beside a lake in Sussex, not far from where he lived, and I spent the hours that followed fishing beneath August sunshine. It was the kind of quiet, ordinary day on which nothing extraordinary ought to happen. But it did. By the time the afternoon rolled towards evening and I began to wonder why he had not returned, he was already dead â killed in a car crash on his way to visit my grandmother in hospital. Waiting there alone, I clung to hope for as long as I could, but I had already imagined the worst. And though eventually I walked away, in search of someone to tell me what had happened and somewhere I could spend the night, part of me was left there beside the lake. Part of me has never stopped waiting.

On that evening, all of the plans I had came to an end, and when I returned to Shetland the following week it was with nothing in front of me. My parents had separated years before, and while I lived with my mother and brother in the islands, my father was in the south of England, at the other end of the British Isles. That summer I had been offered a place to study music at a school of performing arts in South London, and so I went to live with my dad. I had found a direction and followed it. When he died, just before the first term began, that direction was lost forever. I had no choice but to go north again, and once there I had no idea what I would do. On the day I stood beside the window, dreaming of the parallel, I had been stranded for months, lost and half-hollowed by grief. I was looking for something certain. I was looking for a direction.

Over the years, Shetland has made much of its latitude. When I was at high school, our youth club was called 60
North. Later, there was a fishing industry newspaper with the same name. And a tourist radio station. And an online magazine. And a skip-hire company. And a beer, brewed in Lerwick.

Part of this ubiquity is down to a lack of imagination, and part of it to a kind of brand mentality: selling our northern exoticism, or something like that. But there is more to it, I think. Sixty degrees north is a story that we tell, both to ourselves and to others. It is a story about where â and perhaps also who â we are. âShetland is at the same latitude as St Petersburg,' tourists are informed, âas Greenland, and Alaska'. And they are told this because it seems to mean something. It seems to mean more, for instance, than the fact that Shetland is at the same longitude as Middlesbrough, or as Ouagadougou. To be at sixty degrees north is to be connected to a world that is more interesting and more mysterious than the one to which the islands are usually bound. To highlight it is to assert that this is not just a forgotten corner of the British Isles; Shetland belongs also to something else, something bigger. Once it was at the geographical heart of a North Atlantic empire, enclosed within the Norse world in a way that provokes nostalgia even now, more than five hundred years after the islands were pawned by the king of Denmark and Norway to Scotland. Unlike political or cultural geographies, the sixtieth parallel is certain and resolute; it is impervious to the whims of history. Shetland belongs to the north, upon this line with no corners to which it may be consigned. At sixty degrees, Shetland is as central as anywhere and everywhere else.

But what of those other places on that list we recite to tourists? What do we share with them, beyond a latitude? What exactly is this club to which we so enthusiastically belong? Looking at a map, it is possible to claim that the sixtieth parallel is a kind of border, where the almost-north
and the north come together. In Europe, it crosses the very top of the British Isles and the bottom of Finland, Sweden and Norway. The line skirts the lower tip of Greenland, and of South-central Alaska. It slices the great expanse of Russia in half, and in Canada it does the same, marking the official boundary between the northern territories and southern provinces. All along the parallel are regions whose inhabitants are challenged, to some extent, by the places in which they live. They are challenged by climate, by landscape, by remoteness. And yet those inhabitants choose to remain. They make their peace with the islands and the mountains, the tundra and the taiga, the ice and the storms, and they stay. The relationships between people and place â the tension and the love, and the shapes that tension and that love can take â are the main focus of this book.

It was more than a decade after that day beside the window, when I dreamed my way around the world, that I finally set out to do it for real. I had spent half of those years away from Shetland. I had been to university, in Scotland and in Copenhagen, then lived and worked in Prague. I had found new directions and pursued them. And then I had come back, through choice, finally, rather than necessity. During those intervening years I thought so often about the parallel, imagining and reimagining the line, that when eventually I decided to follow it, I hardly paused to ask myself why. Now, though, I think I know the reasons.

It was curiosity, first of all. I wanted to explore the parallel, and to see those places to which my own place was tied. I wanted to learn about where I was and what it meant to be there. I wanted to come back laden with that knowledge, and to write it down.

But finally, and perhaps most potently, it was homesickness that made me go. It was a desire to return to somewhere I belonged. My relationship with Shetland had always been fraught and undermined by my own past, and somehow I imagined that by going â by following the parallel around the world â that could change. To make such a journey, in which the final, certain destination must be home, was an act of faithfulness. It was a commitment that, for the first time in my life, I felt ready to make.

And so I went, visiting in turn each country on the sixtieth parallel. I travelled westward, with the sun and with the seasons, to Greenland in spring, North America in summer, Russia in autumn and the Nordic countries in winter. But I began by finding the line. 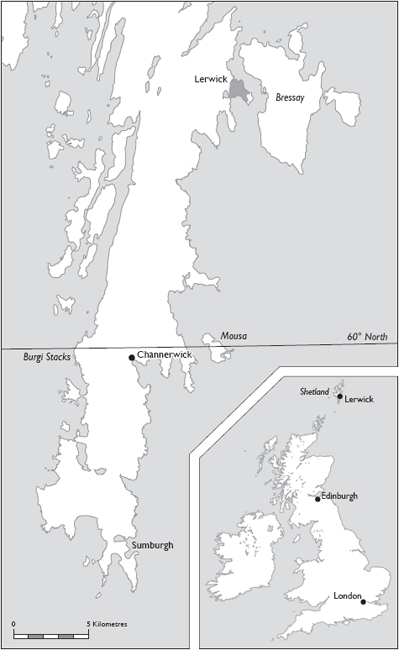 The Valhalla Prophecy by Andy McDermott
Fated Dreams (Book One In The Affinity series) by Smith, Christina
Gods Of Blood And Fire (Book 1) by A. J. Strickler
Emma Blooms At Last by Naomi King
Room at the Inn (Novella): A Loveswept Contemporary Romance by Knox, Ruthie
The Unexpected Series (Unexpected #1-3) by Amy Marie
Cashelmara by Susan Howatch
Unhinged by Findorff, E. J.
The False Prince by Jennifer A. Nielsen
Ghosts of Empire by Kwasi Kwarteng
Our partner