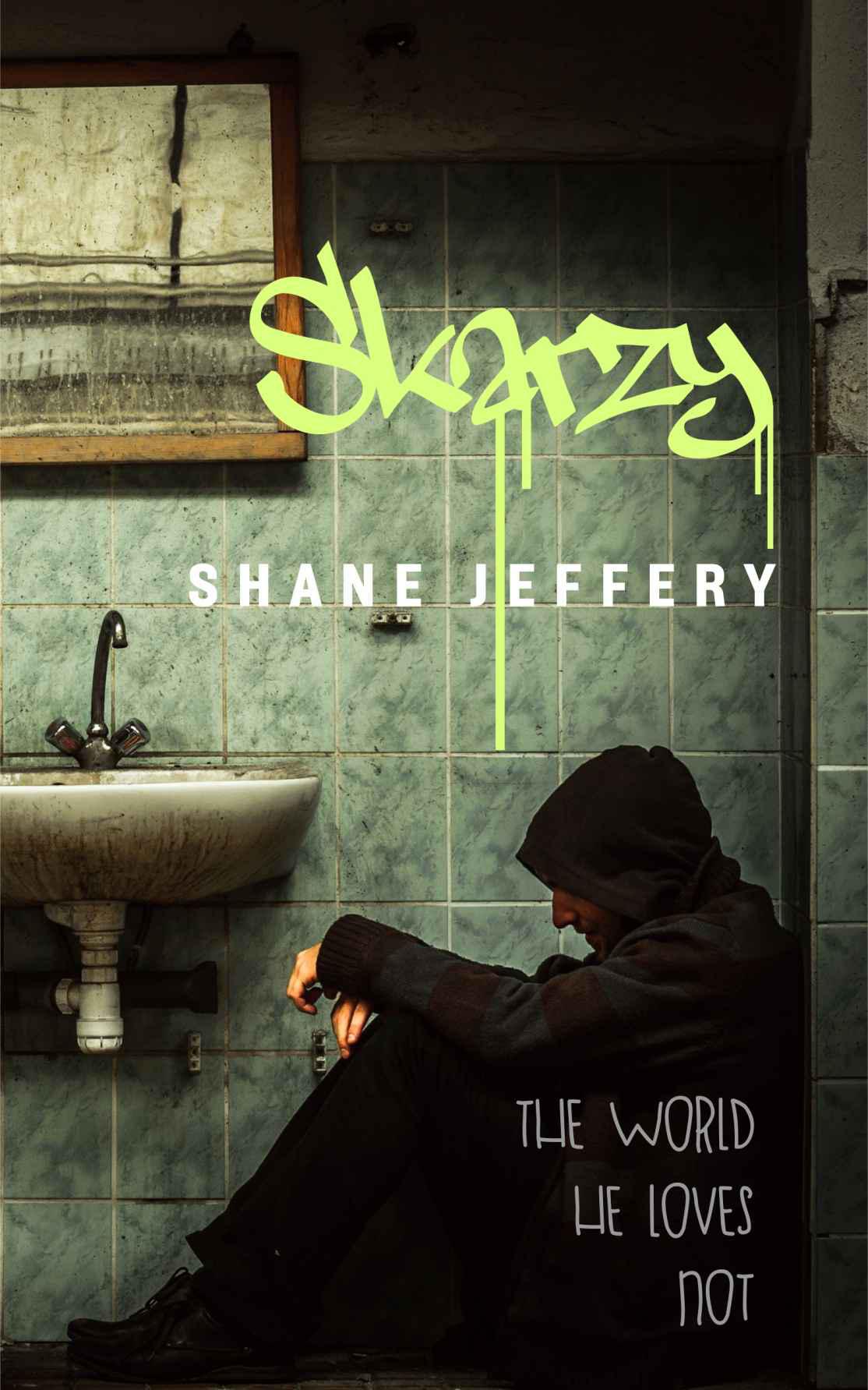 All rights reserved. No
part of this book may be used or reproduced in any manner whatsoever without
written permission from the author except in the case of brief quotations
embodied in critical articles or reviews.

The characters and
events portrayed in this book are fictitious. Any similarity to real events or
real persons, living or dead, is coincidental and not intended by the author.

All trademarks belong
to their respective holders and are used under trademark fair use.

Skarzy – killer – just starting
running when the sirens went up. The others were shouting and swearing –
tossing bottles and cans and fuck whatever else when they saw him go by.

“Skarzy – you
chickenshit – get back here!”

Skarzy was
laughing now. It’d been a while since he’d had a good run. He’d been meaning to
start jogging again – start jogging start eating healthy – start going about it
the good way. Hell, last Tuesday he almost did. Stood himself right outside the
gym and bought himself a bottle of sports water. But then Lucy called his
mobile. And he fucking bent for her.

Skarzy stopped
on the bridge. Put his hand on the dark green railing. It was cold. The air and
everything. The cars and the streetlights. The puddles and the moon. It was
cold alright. A cold summer night. They were the best.

He looked
back. Some of them were chasing him.

Lucy was
chasing him.

Her foot
landed in the wrong puddle and she tripped. The others stopped to help her up.
And Skarzy laughed. He laughed so hard.

He picked up
his pace again.

What time was
it?

Still plenty
of trains going on now. And the tracks weren’t far from here. He could see them
over the bridge.

Skarzy ran.
While running he checked his pockets.

He had dropped
something. He hoped it wasn’t his wallet.

The cigarettes
were there …the wallet too. And his phone.

What was it
he’d dropped?

He took his
hands out of the jumper and touched his jeans.

Yuck. The
blade was still there. The curry muncher’s blood was seeping into his pants.

Skarzy stopped
at the intersection, wincing in pain. He took the knife out hesitantly and
dropped it on the pavement. It made a
thank
sound.

There was dark
red blood in his pocket. The blade had cut him while he’d run.

But it didn’t
hurt. At least not yet.

Once it went green, Skarzy tore across
the road and pain shot up his right leg.

A passing man
imitated him
(Aaargggh!!!)
but Skarzy didn’t look twice. He hurried onto
the other side of the road clutching the leg bitterly, limping. He checked his
pockets again for the thing he lost, but found it all there again, with some
relief.

By the time he
reached the corner, Lucy and two of the others had made it to the intersection,
and were looking about. They couldn’t yet see him.

Skarzy turned
around the corner and marched onto the brown gravel leading up to the tracks.
He followed on to the ramp and pulled back the glass door. There was no one in
the station office.

The blood was
gushing about now in his pants. If he stopped for just a moment it would drip
down his legs.

He looked
about for a newspaper, something to cover the blood, a magazine…

No, that
wouldn’t do.

He put it down
and spun deliriously about in the office.

“The next
train to depart from platform one will be the 10.04 service stopping all stations
to Frankston…”

Skarzy looked
up at the white analogue clock mounted on the wall.

He still had
ten minutes.

Blindly he
took the magazine off the bench again and opened the door to the platform. He
looked to either side.

Across on the
other platform there was a young man with stringy blond hair sitting hunched
over; a cigarette in his mouth; a bicycle by his side. He hadn’t seen Skarzy
yet but…

Panicking, he
hobbled over to the public toilet, pulled back the handle and rushed inside. It
went back with a
wallop
and Skarzy’s face screwed up in frightful agony,
fumbling his way into the dank pit. There were three cubicles. He reached for
the last one, and locked himself inside. He dropped the magazine and crouched
two feet on the toilet, ignoring the foulness below. He picked up the toilet
roll off the floor and crammed a pile of it down his pants to nurse his wound.
Sigh. Exhale. Breathe.

Just how long
was he going to sit here?

They would
come, he was sure of that. He should have kept going.

Found a park
somewhere and disappeared into this miserable town.

He had a
phone. He could have called a cab. And he had the money too.

Almost four
grand he’d lifted from the register. It was sitting right there beside the –

Skarzy put his
hand in the empty left pocket, and heard the whole world laughing at him.

He looked
down, tears emerging. Found himself staring at five green turds.

He bit back a
scream and hit the toilet to flush.

And then a
second later he heard a wallop. And then Lucy’s voice.

Someone belted
the door with a bat.

Someone struck
it with a chain.

“What did he
say…?” someone whispered.

“Open the
fucking door ya cunt!”

Skarzy managed
a smile. “No.”

There was
silence for a moment. And then a rustling from the cubicle next door.

Skarzy brought his arms to his face
defensively. A curly haired boy peered over the side.

“What’s up?”
Skarzy muttered. He’d met the kid for first time that night. His nickname was
Serious.

Serious’ eyes
squinted with fury, and he lifted his leg over the side and began to climb over
into Skarzy’s cubicle. He carried the bat.

Skarzy jumped
hurriedly off the toilet and unbolted the door – he slapped Lucy away viciously
and tore on to the exit – before being struck in the back with the chain.

Skarzy
stumbled and the third assailant took a second swipe at his ankles, sending down
to the wretched piss puddle floor. He rolled over onto his back, his mouth open
in pain, no whimper uttered.

They stood
over him – the terrible trio – Mark Vostle, an old friend fucked over; Curly
Serious and the bat; pink skirt, black top, purple headband – the ex-princess
Luckcharm Lucy – the blonde girl and her two men at arms.

Skarzy
laughed, embarrassed. “I don’t have it.”

Vostle struck
at his legs again with the chain, and he cried out.

Lucy jumped on
him, ravaging his pockets, Serious’ bat hovering just over his neck. She
dismantled his belongings completely – the cigarettes, his wallet, the phone –
all of it flung about in a frenzy. Her face was flushed with fiery desperation,
she hissed and scratched and spat like a starving cat, her chest heaving back
and forth with each millisecond pant.

He locked his
pelvis around her waist.

“Motherfucker!”
she cried and looked at Serious, whose bat had gone lingering elsewhere.

She turned to
Vostle, who was now suddenly taking a piss, and Skarzy’s grip hardened.

“RRRROOAARRRHHHH!!!”
Lucy screamed, and suddenly went for his face.

His mouth. His
tongue.

Skarzy’s head
snapped back on the concrete and for a second he couldn’t make it out.

Lucy was
hacking away at his tongue like she was slicing meat off a bone.

It was his
turn to scream.

He tried to
punch her but she was too strong.

“Eat it!” she
shouted. “Eat your fucking words!”

And yeah, he
could have. That piece of tongue was rolling around in his mouth like a cut of
hamburger meat. For a second it actually felt like he was being kissed.

Vostle was
back again. He pulled Lucy off him.

“Jesus, what
the fuck?” he said angrily.

Dazed, Skarzy
sat up slowly, blood gushing out of his mouth like milk from a carton.
Eventually the piece of tongue made its evacuation.

But not quite
all the way.

Skarzy touched
it dangling over his chin, and felt the loose strings of flesh still attached
all the way back to the remainder in his mouth. He gave a hollow choke and a
faint bleating noise as he yanked it out.

Skarzy turned
the limp excrement over in his palm, tears rolling down his cheeks fluently. He
stared at Lucy with white rage.

It was just
air.

“That’s what
you get,” Lucy muttered, and Vostle shoved her into the corner.

He turned to
Skarzy, careful like, biting his lip.

“We just want
the money.”

“She just
did,” Vostle replied.

“All of it,”
Serious continued. “Take his clothes off.”

Skarzy looked
over to him, his posture tilting, on the verge of madness.

“You don’t
scare me,” Serious said wielding the bat. “Come on.”

Skarzy stood
and Serious belted him in the stomach. He fell to his knees.

Skarzy tore it
off and flung it at him.

He shook the
jumper and nothing came out.

“He probably
doesn’t have it, man,” Vostle mumbled.

Lucy stepped
off the back wall and went over to Skarzy’s discarded smokes. She lit one and
put it to her mouth.

“All of it,”
Serious said to Skarzy. “Don’t fuck around.”

By the time
they were finished Skarzy was left alone cowering in nothing but his socks.

Serious took his time with Skarzy’s clothes.
When nothing turned up, he threw them across the ground in a rage and moved
onto the cubicle Skarzy had been hiding in.

Vostle stood
guard at the exit, checking his watch every moment or so.

Serious
finally addressed Lucy. “He must have dropped it.”

Lucy looked
down at Skarzy, without sympathy.

Outside he
heard the speaker phone:
“The next train to depart from platform one will be
departing now …”

And the train
was pulling up.

Vostle held
the door open accordingly. “Are we getting that?”

Lucy silently
followed him out. She had taken his wallet and phone too.

Serious stood
grinning at Skarzy. He motioned to the first cubicle.

Then he briskly
gathered up Skarzy’s clothes.

He dropped
them in the toilet bowl with the turds and pressed flush.

“Have a nice
day,” Serious murmured poking him with the bat as he exited.

Skarzy
painfully lifted himself up from the wall and staggered over to the cubicle.

The smell was
unbearable.

He stuck his
hand inside and pulled out his saturated shirt. A few murky drops scorched his
body like acid as it rang out dripping.

He opened his
mouth.

Outside he
could hear the train leaving.