Read So Over My Head Online

So Over My Head 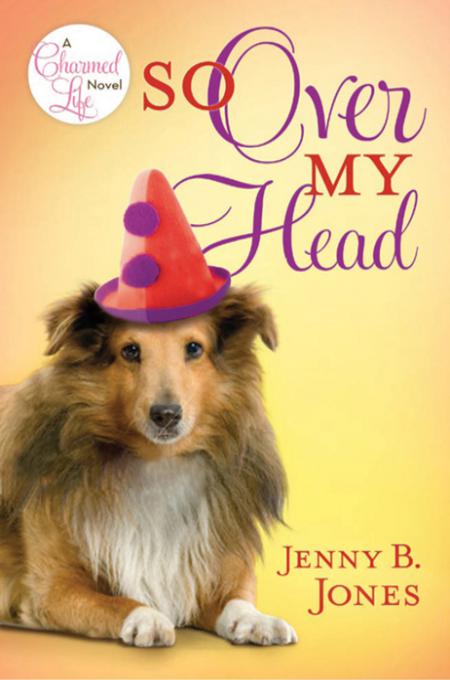 SO
Over
MY
Head

other books by Jenny B. Jones include:

Just Between You and Me

All rights reserved. No portion of this book may be reproduced, stored in a retrieval

system, or transmitted in any form or by any means—electronic, mechanical,

photocopy, recording, scanning, or other—except for brief quotations in critical reviews or articles, without the prior written permission of the publisher.

This book is lovingly dedicated to my cute
sister-in-law, Laura. She is a ray of sunshine in
our family, as well as our missing piece, fitting in
just perfect to complete the picture.

I love you, girl, and am so glad you saw something in
my brother. I personally don’t get it, as all I ever saw
was someone who always stole the front seat as well as
my allowance, but whatever. To each her own. May
God richly bless you with laughs, love, and cute shoes.

I
f my love life was the knife toss at a circus, I’d have Luke Sullivan speared to the wall with an apple in his mouth.

“
Ladies and gentlemen! The Fritz Family welcomes you to the greatest show on earth!” A man in a top hat stands in the center of a giant tent, his curlicue mustache as delicate as his voice is strong. “Prepare to be amazed. Prepare to be wowed. Allow us to entertain you with sights you’ve never seen, horses whose feats will astound you, and death-defying acrobatics!”

On this first night open to the public, the crowd stands in a swarm of shouts and applause.

I stay seated and jot down some quick notes for the
Truman High
Tribune
. Or at least that’s what I’m pretending to do. In actuality, it’s taking all my energy just to be civil.

“I just don’t see why you had to invite her.”

From his standing position, Luke glances down. “Are we back to that again?”

“You and I are working on the carnival story. Not Ashley.” Ashley Timmons, a new girl who joined the newspaper staff last week, has become my least favorite person on the planet. She’s not quite as awful as those on the top of that list—namely the handful of people who’ve tried to do me bodily harm over the last year. But icky nonetheless. Fresh from Kansas City with her brother, Ashley thinks she is to journalism what Tiger Woods is to golf. She’s disgustingly cute, and worst of all, she’s Luke’s ex-girlfriend. She only moved away for two years, but I can tell she’s ready to rekindle anything they used to have. It doesn’t take a keen reporter’s intuition to see that. Just anyone with at least one working eyeball.

“We’ve hung out with them all week, Luke.”

“I haven’t seen Kyle in a long time, and he’ll be leaving soon for college.” Luke searches my face. “I’ve included you in everything. Have you felt left out?”

“No.” I just want
her
left out. I don’t mind the return of his friend Kyle at all. But where Kyle is . . . there you’ll find his sister. “Tonight isn’t about hanging out with your friend though. He’s not even here. You invited Ashley for the paper.”

“You’ve been ticked at me ever since your last article. But it was weak on verbs and lacked your usual creativity.” He sits down and trains those intense eyes on mine.

“Yeah, and then you proceeded to show me some piece of writing wonderment your new recruit produced.” Ashley came with glowing recommendations from her former journalism teachers. Everyone on our staff thinks she is, like, the greatest thing to writing since the delete key. Everyone but me.

“You know what your problem is, Bella? Number one, you’re jealous and insecure—”

“Of her?” I toss my hair and laugh. “Maybe I just don’t like the way she’s thrown herself at you from the second she stepped into the classroom. I’m not insecure, but I’m also not stupid.”

Luke’s mouth twitches. “I meant insecure of your writing abilities. But now that you mention it, you probably are jealous of my talking to her. That would fit.”

“Fit what?” A band of clowns ride unicycles in the ring, but I don’t even bother to watch.

“It would fit with the Bella Kirkwood pattern.” He lifts a dark brow. “You are completely distrusting of the entire male species. I guess one couldn’t blame you, given your dad’s history
and
your experience with your ex, but I have no desire to get back with an old girlfriend.”

“This is outrageous. I do
not
have trust issues with guys! And you know what else?”

“I think you’re enjoying all the attention from Ashley.” All Luke and I have done is fight lately. While digging into other people’s business might be my spiritual gift, I’m beginning to think arguing comes second.

“Ever since we’ve been together, you’ve balked at my every comment in journalism. You can’t stand to be criticized—even when it’s for your own good. And”—his blue eyes flash—“you’re just waiting for me to cheat on you like Hunter. You think I don’t see that?”

Hunter would be my ex-boyfriend from Manhattan. This past fall I caught him doing the tongue tango with my former best friend Mia. And then not too long ago I considered getting back with him. He swept me up with this new version of Hunter Penbrook, told me he had started going to church, said all the right things, bought me coffee. It’s a little hard to resist a cute guy bearing a mocha latte with extra whip, you know? Luckily, at prom two weeks ago, I saw the light and let that rotten fish off my hook.

“I’m not worried about you cheating on me, Luke. I’m tired of you bossing me around and acting all ‘I’m in charge.’”

“Not of our relationship.”

“I’m back!” Ashley chooses that very moment to flounce back to her seat. “I got you a cotton candy.” She hands the pink confection to Luke. “Bella, I figured you’re like most girls and need to watch your weight, so I didn’t get you anything. What’d I miss?”

Luke holds me down with his arm. “Don’t even think about it,” he whispers.

The crowd
oohs
and
ahhhs
as the Amazing Alfredo begins juggling two long silver swords. I applaud politely when he pulls a third one out of his hat and tosses it into the air with the rest. I’d hate to think where that sword was
really
hiding.

Like a distant relative, the Fritz Family Carnival comes to Truman, Oklahoma, every April and sets up camp on land that, I’m told, goes way back in the Fritz genealogy. They stay at least a month—working on additional routines, training new employees, giving the local elementary teachers a nice afternoon field trip— and don’t leave until they can ride out bigger and better than the year before. And while that might be odd, it’s nothing compared to the fact that I’m sitting on the bleachers between my boyfriend and a girl who has been openly flirting with him. That chick needs to learn some boundaries.

“Bella, Luke said you might need some help with your article.”

He holds up a hand. “I just thought it would be interesting to get our three perspectives. Bella will still handle the interviews.”

“It’s been so great to work with you again, Luke.” Ashley’s smile could charm the shirt off Robert Pattinson. “Just like old times, huh?” Her eyes gaze into his. Like I’m not even there. “Kyle’s really enjoyed hanging out. Too bad he had a study session tonight.”

Luke leans close, his mouth poised near my ear. “Just because we’re dating doesn’t mean I’m going to slack off on your writing. You’re still a staff member. And you
know
I do not boss you around any other time. I have been nothing but respectful to you.” He returns his attention to the ring. “Did you write down the fat lady’s stats?”

“Of course I did.” I scribble something illegible on my paper. No, I didn’t get her stats. I’m too busy fighting.

“She’s seven hundred and twenty-nine pounds, in case you missed it,” Ashley chirps.

“You always act like I can’t handle the writing assignments,” I whisper for Luke’s ears only. “I think I have more than proven I can. Not only can I write, but I can crank out some award-winning writing
while
crime solving.”

After I moved to Truman, I accidentally became the Nancy Drew of Oklahoma. Now that I’m known for my mystery solving skills, friends and strangers want me to help them out. Just last week I tracked down a stolen iPhone and did a little spying for a suspicious girlfriend who thought her boyfriend Buster was cheating. It’s true he hadn’t been going to football practice like he said; I found him at Margie Peacock’s School of Ballet, lined up on the bar doing pirouettes and high kicks. I hear he makes a heck of a swan in Margie’s recital.

Truth by Peter Temple
The Intruder by Hakan Ostlundh
Scorpion by Ken Douglas
All I Want For Christmas by Liliana Hart
That Day the Rabbi Left Town by Harry Kemelman
Dolly and the Bird of Paradise - Dorothy Dunnett - Johnson Johnson 01 by Unknown
Tipping the Balance by Koehler, Christopher
Softly Grow the Poppies by Audrey Howard
The Shapeshifters by Andrew Brooks
Vanishing Act by Barbara Block
Our partner