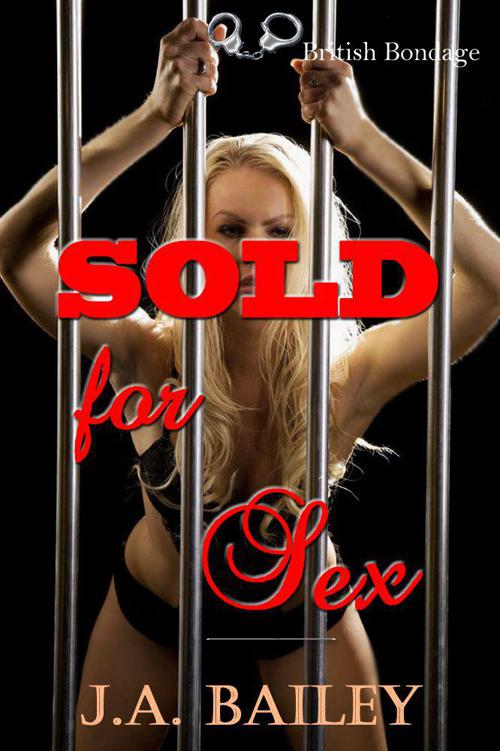 All
rights reserved. No part of this book may be used or reproduced in any manner
whatsoever without written permission except in the case of brief quotations
embodied in critical articles and reviews.

This is
a work of fiction. Names, characters, places, and incidents are products of the
author’s imagination or are used fictitiously and are not to be construed as
real. Any resemblance to actual events, locales, organisations, or persons,
living or dead, is entirely coincidental.

Holly bit back a squeal as her
arms were yanked behind her back and the bouncer pinned her wrists between two
sweaty, meaty hands.

Justin stepped around her and
eyed her with a grin that made her shudder. She wore the sort of outfit she
always wore to work - a shirt and pencil skirt - but as he looked over her with
his lips turned up at one corner, she felt as if she were naked.

“What’s the meaning of this?” she
demanded as the bouncer dragged her over into a dark corner of the club.

She struggled briefly but she was
no match for the strong man, whose thick arms were probably about the same
width as her waist.

“Yer uncle has a job for you,”
Justin drawled out in his east London accent.

“Well, I’m sure he could have
told me that.” She wriggled again. “Dammit, let me go, you bloody perv.”

Justin laughed at this and
reached forwards, tracing a finger over her cheek and down into the ‘v’ of her
shirt. Holly kicked out at him but the huge bouncer tugged on her arms and she
bit down on her lip as the movement wrenched her shoulders.

“Justin, just tell me what you
want,” she said with a sigh.

“It’s a special job. For a
special client.”

“Mmmm,” he murmured as his
fingers followed the waistband of her skirt.

Gritting her teeth, she stiffened
as he forced his hand down to the top of her knickers and then under the
fabric. She fought down the bile in her throat. This wasn’t the first time
Justin had tried something on since she’d started working for her uncle at the
age of eighteen but he’d never forced himself on her. She closed her eyes and strove
to keep her expression blank. He was toying with her, she was sure of it. If
he’d really wanted to harm her, then he’d have done it long ago.

“What does he want? Some accounts
doing?” she made herself ask as the unwelcome fingers brushed at the bare skin
underneath her knickers.

“No. Definitely not accounting,”
Justin said with a laugh.

Holly snapped open her eyes.
“Just tell me the fuck he wants, Justin.”

“It’s a club client. He wants a
certain type of woman.”

Justin laughed again and shook
his head as his hand swept mere inches from her pussy. “What do you think he
wants?” He motioned around the club.

Not that she had much of a life
outside of work thanks to her uncle.

A women lay bound on the stage,
her skin red from a whipping as several men fucked her and she screamed with
pleasure and pain.
She
was nothing like these women. And she had never
been made to service any of the clients. Until now.

Justin’s hand closed over her
pussy and she stiffened as her heart hammered. She waited for him to press his
disgusting fingers into her but instead he held her bud between his fingertips.

“I don’t do that kind of work,”
she told him, aware her voice was wavering.

The pressure on her bud increased
and she yelped as he pressed relentlessly. “You’ll do as you’re told.”

“Has…” she panted as the pain
surged through her cunt. “Has my uncle told you this?”

Justin smirked. “He’s the one
that suggested it.”

Squirming under the increasing
pinch of his fingers, Holly fought down the nausea that threatened to take over
her. “Take me to him,” she demanded hoarsely.

Justin studied her for a moment,
a smirk on his face as he watched her pained expression before releasing her
clit and withdrawing his hand. He grinned and sniffed at his fingers before
tasting them.

“You’re fucking gorgeous, Holly.
It’s a shame you’re a stuck up little slut. We’d be great together in bed.”

“Over my dead body,” she snapped
as the blood rushed back into her sore pussy.

He smirked again before nodding
to the man holding onto her. He released her arms and Holly rolled her shoulders
in an attempt to ease the ache.

With Justin leading the way,
Holly worked her way through the small tables and leather couches, all occupied
with naked and semi-naked women and men in all kinds of gear. Some came
straight from work and were still in suits, while others were in full Dom mode
and dressed up for the occasion, usually in black leather or latex. The blue
strobe lights and faintly pulsing music all amped up the sexy vibe of the club.

While Holly was used to it and
she appreciated that those who worked here, enjoyed what they did, she had
never considered that she’d be one of the girls. Some did it for fun, some did
it for money. But they were all willing. She pictured it sometimes…what it
would be like to be tied up and fucked and whipped…She shuddered. With her
limited experience, she knew she was definitely not submissive material. Was
her uncle really going to force her into doing the same?

Her uncle sat behind his desk,
his portly belly resting against the edge. As a fetish club owner, he was about
as vanilla looking as they came. His comb-over and sweaty red cheeks all gave
him the appearance of a gentle man, involved in something academic perhaps, but
nonetheless his club, SinSity, was one of the most popular haunts for Doms in London.
And most of that was down to the fact that her uncle was a ruthless
businessman.

“Are you serious?” she asked him
bluntly.

He grinned and pulled off his
glasses, setting them on the desk calmly. “Serious about what, sweetheart?”

“Yes!” Holly exclaimed as she put
her hands on her hips.

“Are you kidding me? I’m your
accountant, nothing more. Get one of your other girls to do it.”

“Look, Holly,” he rested his chin
on his hands, “this is an important client. Very rich. We need to keep him
happy. And to do that, we need you.”

“This is ridiculous. First you
take over my life, then I have to work for you and now you expect me to fuck
for you?” Holly shook her head, fighting the churning of her stomach. Her uncle
could do as he wanted with her. Her life was in his hands.

“Yes, I expect you to fuck for
me. You can always refuse. In which case, you know where the door is.”

Holly darted a look at the door
and then back to her uncle. He watched her calmly through his cool grey eyes.
She longed to throw a punch in his face, storm out the door and never look
back, but where would she go?

After becoming orphaned at a
young age, her uncle had taken her in. Her parents had been the hippy sort and
had little to call their own, so neither did she. She was completely reliant on
him. Slowly but surely, he sapped away every measure of independence and before
she knew it, she was twenty-five, still living in his house and working for
nothing as his accountant in his club.

Where would she go if she ran?
She had no friends, no family, no money. She sighed. No choice. Unless…

“You need me…” she tried
tentatively.

“You need me, don’t you? I mean,
if you want to please this rich client, then you need me.”

“Holly, get to the bloody point.”

“I’ll do it.” She watched as a
self-satisfied smile came over his chubby face. “But only if you give me some
money and let me leave.”

“How important is this client?”
she persisted, drawing herself tall. She was used to her uncle’s rants.

“He wants what you can provide,
yes.”

“He wants a virgin,” he mumbled.

Holly laughed. “I’m not a virgin!”
Well, only just.

“Not that kind of virgin,” he
said tightly.

His eyes narrowed. “What?”

“Yep. Come on, it must be worth
it. If he’s a billionaire, think about the what’ll happen if he becomes a
repeat customer. I bet he’ll probably spend twenty thou on champagne alone
tonight anyway.”

“Fucks sake, and you’ll go
where?”

Holly shrugged. “I don’t know.
Somewhere, anywhere.”
Away from here.
£20,000 was enough to pay rent for
a good while and allow her time to search for a job.  Was she really going to
sell herself for money? She glanced over her uncle’s sweaty face.
Oh yes,
definitely

Stroking at his chin, he
considered her for a moment before lifting his hands in surrender. “Fine. Ok. Twenty
K. But you do it properly, you understand? He has to come back. Be submissive,
be perfect. Do everything he asks. You got a hot body, so he’ll want you, but
he won’t want you if you do anything wrong. This guy has a reputation for being
picky.”

“Good. Ok.” Holly drew in a deep
breath as the hammering in her heart picked up again. What the hell had she
just done?

Motioning to Justin, her uncle
nodded at him. “Get her a sub outfit and take her to him. He’s in one of the
private booths.”

With a nod, Justin turned to her
and leered. “Come on then, Hol, let’s get you kitted out for yer fuck date.”

Half an hour later, Holly was in
the club sub uniform. A tight latex dress, with easy-access zips and an open
back. Only strips of latex covered her arse, keeping the dress on. She had no
knickers on and her breasts were pushed up by the latex until they threatened
to spill out of the black material. She had taken her red hair out of its usual
bun and it trailed over one shoulder. A black choker sat around her neck, a
small silver ring thread through it. As she studied herself in the mirror, she
conceded that she looked the perfect sub. Only the most attractive subs worked
at SinSity and it surprised her to realise that she matched up easily to them.

The door came open and Justin
whistled as he eyed her. She spun around, her cheeks flaming only to realise
the he could still see her arse in the mirror. Clapping her hands over it, she
shifted away from the mirror.

“I wouldn’t bother. I’ll probably
see a lot more of you soon.”

Narrowing her eyes at him, Holly
went to stomp past him but Justin grabbed at her arm, pulling her to a halt.

Villa Blue by Isla Dean
The Ghost Who Tried to Love Me by Adam Tervort
Toy Story Storybook Collection by Disney Book Group
Call Me Amy by Marcia Strykowski
Bondage Wedding by Tori Carson
Children in Her Shadow by Keith Pearson
On the Blue Train by Kristel Thornell
Dangerous Curves by Dara Girard
Breathe by Crossan, Sarah
Only Vampires Cry Blood by Trina M Lee
Our partner