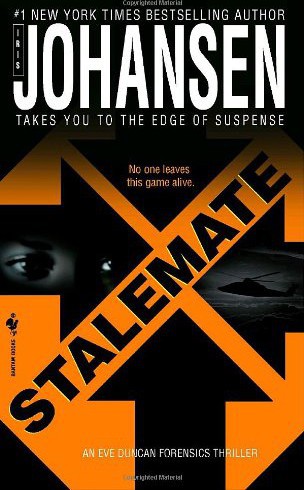 The phone was ringing.

Ignore it, Eve told herself, her fingers moving swiftly on the skull reconstruction she'd given the name of Marty. She could call whoever it was back when she was through working. The phone was set for speaker and she could pick up if it was Joe or Jane. She was getting too close to that important last step in the sculpting.

On the sixth ring the answering machine picked up.

"I need to speak to you. Answer the phone, Ms. Duncan."

She froze, her fingers stopped in midstroke. Luis Montalvo. Though she had spoken to him only twice that faint accent was unmistakable.

"I know you're there. You haven't left that cottage in the last week." His voice became faintly mocking. "Your dedication is admirable and I understand you're brilliant at your job. I look forward to having both focused soon on my behalf." He paused. "Do pick up the phone. I'm not accustomed to being ignored. It upsets me. You don't want to upset me."

And she didn't want to pick up the phone. He might jar her out of the zone of feverish intensity she needed when she was working this close to completion. Dammit, she had hoped he wouldn't call her again after she'd turned him down when he'd phoned her the last time, over a week ago.

No, he probably wouldn't. Montalvo had been polite during the first call and even after she'd refused his offer, the second time he'd phoned he'd displayed no anger. His voice had been smooth and soft, almost regretful, yet there had been a note beneath that velvet courtesy that had puzzled her. It had made her uneasy then but tonight it filled her with impatience. She had no
time for this now. Marty was waiting.

She strode across the room and picked up the phone. "Montalvo, I'm very busy. You've had your answer. Don't call me again."

"Ah, how delightful to hear your voice. I knew you wouldn't be so rude as to leave me hanging on that dreadful answering device. I hate impersonal machines. I'm a man of emotion and passion and they offend me."

"I really don't want to hear what you love or hate. I don't care. I want to get off this phone and forget you exist."

"I realize that sad fact. You're absorbed in your latest reconstruction, of that boy found buried in Macon. Have you named him yet? I understand you name all the skulls you work on."

She stiffened. "How did you know that?"

"I know everything about you. I know you live with a Detective Joe Quinn of the Atlanta Police Department. I know you have an adopted daughter, Jane MacGuire. I know you're possibly the best forensic sculptor in the world. Shall I go on?"

"That could all be public record. And how did you know about the boy murdered in Macon?"

"I have many, many contacts around the world. Do you want to know who killed him? I could find out for you."

"Because you're not even in this country. You're a scumbag of an arms peddler and you live in Colombia where you can hide out and deal your poison to the highest bidder."

He chuckled. "I do like frankness. Very few women I know are willing to tell me the truth as they see it."

"Then I'm grateful to not be one of the women you 'know,' you sexist bastard. If I were, I'd probably be tempted to cut your nuts off."

"Such violence, such passion. I believe we're very much alike, Ms. Duncan."

"No way." She drew a deep breath. "The answer is still no. I've no intention of coming down there and doing your reconstruction."

"You were very polite and businesslike, almost sympathetic, when I first made you the offer. The second time you were much more curt. I suppose you had Joe Quinn check me out?"

"Yes, of course. I don't deal with crooks and murderers."

"Everyone deals with whoever can make them the best bargain."

"I told you the last time that I wasn't interested in any of your fat fees."

"And I was duly impressed. I don't believe I've ever had anyone turn down a million dollars for a few days' work."

"Not true. All my cash is very well laundered."

"I thought you'd accepted that I wouldn't work for you."

"Because I didn't argue with you? I don't believe in spinning my wheels. I just go away and find another lure. It took almost a week for me to decide what that would be."

"I'm convinced you'll be my guest in a very short time."

"That would spoil the surprise. I like to see a plan unfold like a beautiful night flower."

"You mentioned Joe and my adopted daughter. You touch them and I'll kill you."

"That violence again." His tone was amused. "I'd never be that stupid. That would be the trigger that would send you into the fray to take me down. I want your cooperation."

"Very well. I just wanted to offer you the opportunity to change your mind. It would make me happy if you would come to me for mercenary reasons. Much less stressful for all of us."

"Are you threatening me?"

"Heavens, no. You'd know it if I were doing that. There would be no question. Won't you come and make me happy and become rich in the process?"

Eve slowly pressed the disconnect button. He had said he wasn't threatening her, but what else could she call it? It was subtle, but the threat was all the more chilling for the casual, understated way it was delivered. He'd been so calm when she'd turned down his offer that she'd honestly thought he'd accepted her refusal and was out of her life. It was clear she'd been wrong.

Should she call Joe and tell him Montalvo was still on the scene?

And have him think she was worried and rush home from the precinct?

She wasn't worried. She was uneasy. Montalvo had said her family was safe and she believed him. As he had perceived, any danger to them would have made her angry and rebellious. He'd made no direct threat at all and he might just be trying to intimidate her into doing his job.

Yet he'd seemed to know entirely too much about her movements. Was she being watched?

Yes, she'd definitely tell Joe. But there was no use in alarming him right now. She'd tell him tonight when he came home for dinner. Okay, so she wanted to get back to Marty and she was afraid talking to Joe about Montalvo would keep her from doing it. She wasn't about to let Montalvo disturb her concentration on her work. That slimeball would probably enjoy the thought that he could control her to that extent. He might even call her again and try to reinforce that control. She'd be damned if she'd let him. She turned off the house phone and then her cell phone before moving back toward the reconstruction on the easel across the room.

Block Montalvo out of her thoughts. Think of Marty and the chance to bring him home. Think of the boy who'd been murdered and buried and left alone with no name or place.

That was better. Montalvo's words were blurring, fading away as she began to work.

"Pity." Montalvo looked down at the phone. "I was hoping she'd give in to greed like a normal person. It's easy to be noble for an hour, a day, but then they start to think and perhaps dream a little. A week should have whetted her appetite and made her start making excuses why she should take the job."

"Not everyone thinks that money is the be-all and end-all of everything, Montalvo," Soldono said.

Montalvo smiled. "Almost everyone. It's unfortunate that Eve Duncan is in the minority." He rose from the carved chair at the head of the dining table. "Oh, well. One must make adjustments."

Soldono tensed. "Don't do it, Montalvo."

"Why her?" Soldono asked. "There's a fine forensic sculptor in Rio de Janeiro. Use him."

"Sanchez?" Montalvo shook his head. "Technically brilliant but he's not what I want."

"Eve Duncan is an American citizen and she's known and respected by every police department on the planet. She turned down your money and you'll be stirring up a hornet's nest if you try to force her."

"And you wouldn't like that. The CIA tries to be very low-key these days."

"Let me try to get Sanchez for you."

He gazed musingly down at the depths of the wine in his glass. "It's a matter of passion."

"I told Eve Duncan that I was a man of passion. It's true."

Soldono hadn't noticed any emotion in Montalvo, much less a passion. The man was brilliant, innovative, and he kept any feelings or thoughts hidden behind that faintly mocking smile. "Why Eve Duncan?" he repeated.

"She has passion too. I've studied her file and nothing could be clearer. It's like a whirlwind spinning around her. She grew up on the streets with a drug addict for a mother and gave birth to an illegitimate child as a teenager. She turned her life around and went back to school and became a model mother. Then her daughter was kidnapped and presumably killed, but the body was never found. Instead of being crushed, the lady became a forensic sculptor and tried to bring closure to other parents by identifying the remains of their missing children."

"I know all that," Soldono said impatiently.

"You know the facts but you've never studied Eve Duncan the way I have. I believe I may know her better than she knows herself. I know what drives her. I know what makes her tick."

"Yeah, sure." He couldn't keep the sarcasm from his tone. "Passion?"

"Don't underestimate it. Da Vinci had it. Michelangelo had it. It's the difference between art and creation. Eve Duncan has it." His tone was smooth but hard. "And that's why I have to have her. Don't try to pawn anyone else off on me."

"Find another way. You promised me that you'd--"

"And I'd keep my promise if you'd kept yours." His tone was threaded with mockery as he continued, "But since the lady is not being accommodating, I must have cooperation from someone. You can see that, can't you?"

Montalvo's smile faded. "Then your vision had better improve quickly. I told you yesterday that if I didn't get the answer I wanted, then I'd move. You obviously chose to think I wasn't serious. I'll give you another four hours to persuade her, Soldono. No more, no less." He looked at his watch. "Ten tonight."

"Of course you can. Don't bullshit me. You do it all the time. A life for a life." He turned away. "Finish your dinner. The tiramisu is magnificent. The chef will be upset if you don't try it."

Soldono was seething with frustration as he watched him walk away. Sleek, graceful, and as dangerous as a stick of dynamite too near the flames. Bastard.

Would he do it?

Imhotep by Dubs, Jerry
Sanctum by Madeleine Roux
The Inside Job by Jackson Pearce
London by Carina Axelsson
Sidetracked by Henning Mankell
Instructing an Heiress by Judy Teel
Condemned to Death by Cora Harrison
Nexus by Naam, Ramez
The Hijack by Duncan Falconer
Mortal Sin by Allison Brennan
Our partner