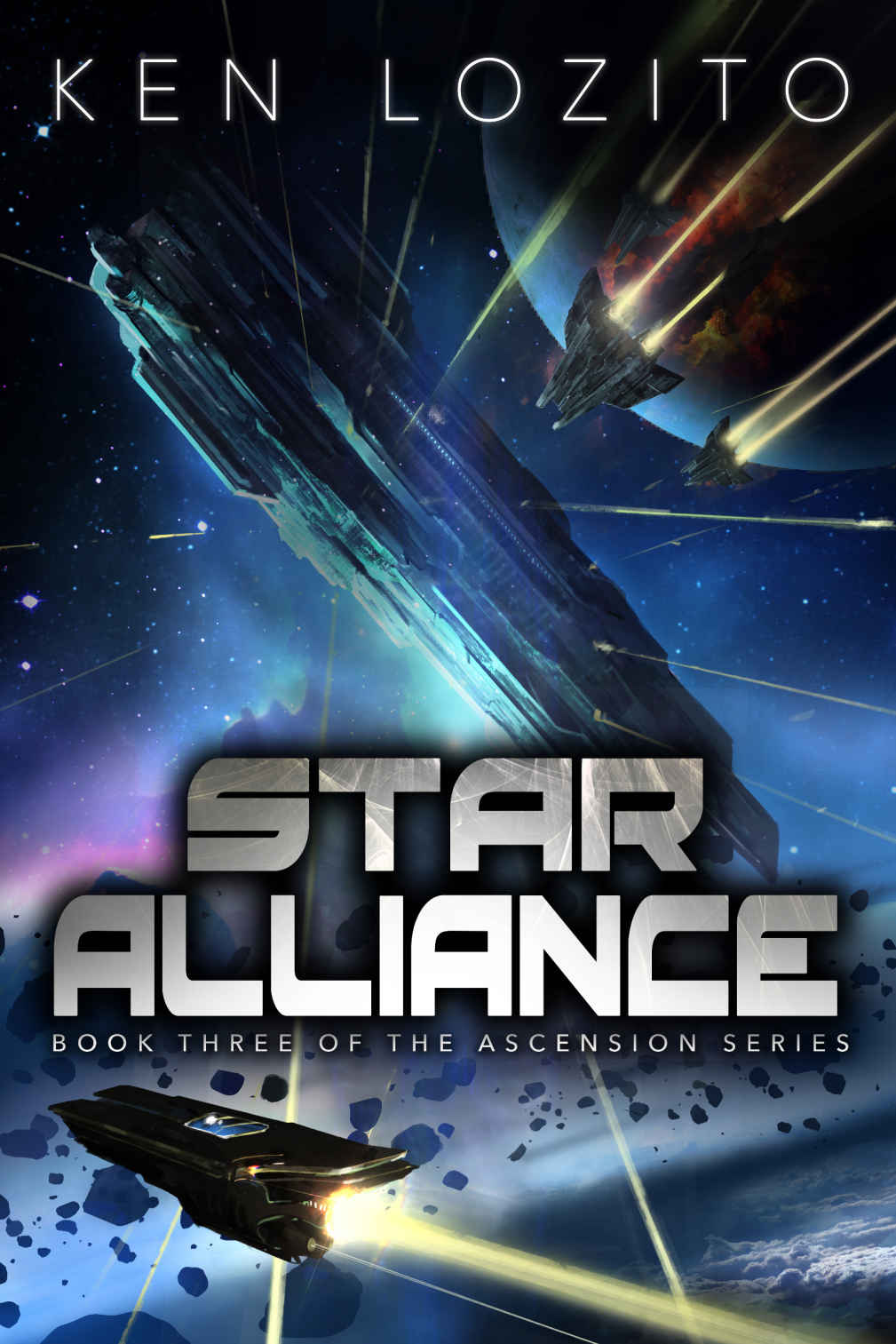 This is a work of fiction. Names, characters, places, and incidents either are a product of the author’s imagination or are used fictitiously. Copyright © 2016 by Acoustical Books, LLC. All rights reserved. This book or any portion thereof may not be reproduced or used in any manner whatsoever without the express written permission of the publisher except for the use of brief quotations in a book review.

I
T
WAS
SIX
o’clock in the morning, and Edward Johnson was being escorted to the infamous West Wing of the White House. A few hours before, he’d gotten the call that President Halloway wanted to meet with him that morning. He had met Susan Halloway when she’d been a senator and a rising star in politics, but this was his first summons to the White House.

As he and his escort walked the long corridors, Ed noted that despite the early hour the White House was already abuzz with activity, and he suspected the quiet moments in this historic seat of power were few and far between. His thoughts returned to the meeting ahead as the aide who was escorting him came to a halt and spoke to one of the Secret Service agents posted outside the Oval office. The agent nodded, but Ed knew the Agency had already vetted him long before he had been allowed to enter the White House.

The door opened, and the aide stepped just inside the doorway for a brief moment, then turned back toward him. “The President will see you now.”

Ed nodded his thanks and stepped inside, taking stock of the place he’d only seen in pictures until then. But the pictures weren’t nearly as impressive as standing in the actual office of the president. Ed felt like he was marching through history with each step he took across the plush carpet of the vast room. His eyes slid toward the Resolute desk where ninety years before John F. Kennedy Jr. had played at his father’s feet. Ed closed his mouth and brought his attention back to the present.

“Mr. Johnson, it’s been a long time,” President Halloway said. “Thank you for coming on such short notice. I believe you know Dr. Philip Gray.”

Ed shook hands with Dr. Gray. He knew
of
him. Dux Corp had indirectly funded Gray’s research in particle physics, but Gray was more advisor than scientist these days. “Please call me Ed,” he said.

Susan nodded. “I’d apologize for waking you in the middle of the night to bring you here, but I knew you were already up.”

“Hardly anyone sleeps all that much at Mission Control since we’ve had initial contact with Michael Hunsicker,” Ed said.

The president took her seat behind the desk, while Ed and Dr. Gray sat on the plush chairs facing her.

“I’ve been expecting your call,” Ed said to the president.

“Really?” Dr. Gray said. “You expected a call from the president?”

Ed glanced sideways at Dr. Gray but kept a majority of his attention on the president. “Yes, and if I hadn’t been called, I would have initiated contact.”

Philip Gray’s mouth hung open in a half bewildered smile.

“Indeed,” President Halloway said, “and it would have been a call I’d have been remiss to ignore, especially when it came from the head of Dux Corporation and a member of its inner circle.”

They shared a moment of acknowledgement, each confirming the other’s powerful positions and influence, but any head of Dux Corp hadn’t reached such levels of influence by being bullheaded.

“Thank you for seeing me, Madam President,” Ed said.

President Halloway smiled, and tiny crow’s feet formed along the edges of her brown eyes. She was a handsome woman—not overwhelmingly beautiful but certainly pleasant to look at—and only a fool would underestimate her. Beneath the pleasant exterior was a shrewd and powerful leader.

“Over the next few days, world leaders will be receiving similar briefings of what I’m about to share with you and your staff after this meeting,” Ed began.

“Is this regarding the Shroud Network?” Dr. Gray asked.

“In part. NASA and the other space agencies around the world have been working through the Athena’s final data burst,” Ed said.

“The one from that hacker, Zack Quick?” Dr. Gray said in a tone that bordered on accusatory.

“I won’t argue Zack’s presence on the Athena Mission. His contribution to the mission has proven invaluable time and time again. The only reason we’re aware of the Shroud Network is because of his work,” Ed said.

“He’s assured us that he has plenty of provisions, but I assume you’d really like to know about the alien he’s taken residence with on Pluto,” Ed said.

“That’s a big part of it,” President Halloway said. “The events of the past few months have made the spaceship Endurance a high-priority item so a rescue mission could get underway. The leak about the alien structure on Pluto and the alien message before that have made many of those on Capitol Hill want to haul Dux Corp leaders and all its subsidiaries before a congressional hearing.”

“Bruce Matherson’s goal was always for the betterment of mankind. His granddaughter is on the Athena Mission,” Ed said.

“Yes, I do,” Ed answered. “The events leading to the disappearance of the Athena were confirmed by Chazen.”

“They call themselves Boxans. We have no reason not to believe him,” Ed said.

President Halloway leveled her gaze at Ed. “Except for the fact that they’ve been observing us in secret for over a hundred years. And the presence of the Star Shroud doesn’t inspire a lot of trust. There is a lot that doesn’t add up for me or my military advisors. I would like to open formal communications with the Boxan.”

“He won’t speak to us in any formal capacity,” Ed said.

“He said he’s not authorized to negotiate for his species. He’s some type of research scientist, and the reason he’s communicating at all is because of Michael Hunsicker’s presence,” Ed said.

“I would like to speak with him,” President Halloway said in a tone that left little room for negotiation.

“We saw that in your report,” Dr. Gray said, and quickly scanned his tablet computer. “A communications device that allows for real-time communication with the alien outpost on Pluto.”

“To put it in layman’s terms,” Ed said, “we can receive calls but cannot initiate a call of our own. The device is basically a receiver. Quite ingenious actually. It has a lot of people in Houston excited. We’ve shared the design specs with the other space agencies.”

President Halloway rose from her seat and walked over to the massive window, gazing out at the meticulous landscape that made up the White House grounds. After a moment’s contemplation, she turned back toward them. “What would you suggest we do?”

“I would suggest we offer Chazen our aid without any strings attached. My impression from Michael Hunsicker is that the Boxan is keenly observant. We shouldn’t try any ploys or anything,” Ed said and paused. “The official offer of aid should come from the global community and not just this nation.”

President Halloway raised an eyebrow. “It’s the global community that concerns me. We want to put our best foot forward, but we’re far from becoming a unified species.”

“There is also the issue of the warning,” Dr. Gray said.

“Yes, the warning about the Xiiginn. They are another alien species. We don’t know much about them other than that the Boxans were shielding us from their presence,” Ed said.

“We need more information, and since this—being—is the only one who can enlighten us, we need to start with him. This is a slippery slope we’re on, and there are a number of avenues that could pull us into an interstellar war,” President Halloway said.

Ed nodded. “I’m prepared to share all we know with you and your staff. The problems we face will affect us all.”

“For all our sakes, I hope it’s enough,” President Halloway said.

A Secret Service agent stuck his head into the Oval Office and announced that the meeting room was ready for them. They filed out of the office, and while Ed knew that the next few hours would shape the world to come, he couldn’t help but feel the weight of all that had transpired in this office since the White House had been built. Mistakes had been made and victories won. In the end, he hoped wisdom and guidance would rule this day.

Millions of miles away on a dwarf planet, Michael Hunsicker sat in the control room of the Boxan listening station. Chazen had just engaged the Boxan communicator, which was connected to a receiver back on Earth.

“Houston, do you read me?” Hunsicker asked.

“Loud and clear, Michael. This is Gary Hunter.”

A holoscreen switched on and showed Gary’s face. Hunsicker smiled. It had been a few weeks since he’d seen another human being, which was nothing compared to the length of time since Chazen had seen another Boxan. Hunsicker glanced over at the Boxan, who gave him a nod.

“Same here. I was told to extend our thanks to your host,” Gary said.

“You are welcome,” Chazen said. His deep voice spoke slowly and clearly.

“Now that we can communicate, Chazen has agreed to share a translator program so you’ll be able to understand him. Inform the other space agencies to be prepared for a data stream that will contain the necessary elements to implement,” Hunsicker said.

Gary Hunter grinned. “Confirm, universal translator program. I’m sure there will be a lot of linguists out there who would like to study it. The European, Chinese, and Russian space agencies will have their comms devices up soon, but for now we’ve agreed to share a recording of these sessions. The spirit of cooperation.”

Hunsicker suppressed a snort. For as long as he’d been with NASA, he’d known scientists were more amiable to the spirit of cooperation than nations. If anything, his experience here on Pluto had taught him that the confirmation of other intelligent life would put some of the petty differences his fellow humans clung to into perspective.

“That’s good news,” Hunsicker said. “I have another six months of supplies left from what we brought down from the Athena, and Chazen believes he can adapt his supplies for human consumption.”

Hunsicker frowned. “I thought the Endurance was two years away from completion.”

“Priorities have shifted. We want to get another manned mission out to you as soon as possible,” Gary said.

Chazen stood up and left the control room. Hunsicker watched him go, and Gary waited him out.

“Is everything all right?” Gary asked.

Hunsicker brought his attention back to the holoscreen and nodded. “Yes. He’s been away from his home for a long time. I wish we could help him get back to his home world.”

“We could, but it would mean he’d have to travel to Earth,” Gary said.

“I’m not sure if he’ll do that, but we can extend the invitation.”

“By the way, we’ve gotten in touch with your family and let them know you’re alive. We’ll bring them here to speak with you soon,” Gary said.

Hunsicker felt his throat thicken. He’d volunteered for the Athena mission after his wife Caroline had died, but he found that he really would like to see his grandkids again. His eyes grew misty, and Hunsicker swallowed down his emotions. “That would be great,” he said.

The Heart Is Strange by Berryman, John
Casca 7: The Damned by Barry Sadler
A Christmas Keepsake by Janice Bennett
The Book of Tomorrow by Cecelia Ahern
Secret Histories 10: Dr. DOA by Simon R. Green
From the Kingdom of Memory by Elie Wiesel
My Seduction by Connie Brockway
Atomic Lobster by Tim Dorsey
Geeks by Jon Katz
Cassidy Harte and the Comeback Kid by RaeAnne Thayne
Our partner