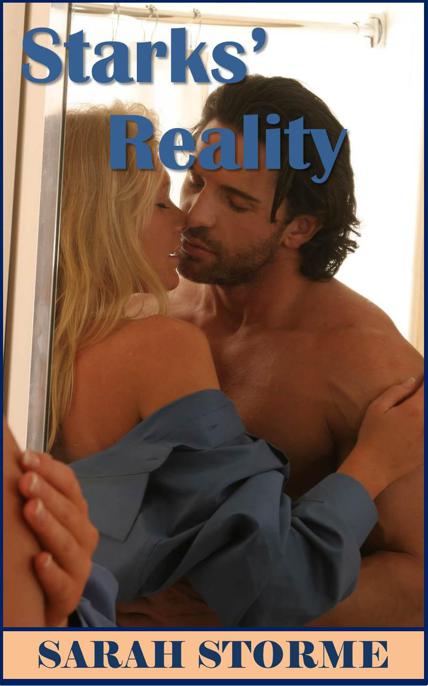 Other e-books by Sarah Storme include:

Angel in My Arms
(audio)

Thank you to my own personal hero,
my husband.

Jake
Starks rested his arm on the patrol car’s open window and surveyed the wide, crumbling road lined with ancient brick storefronts.
Grand?
What the hell had he gotten himself into?

Patrolman
Red Daily identified each building they rolled past. “That’s the hardware store. JoJo Potts owns it. Ornery cuss, but he’ll get about anything you need.

“Rita Mae runs the bakery. Doughnuts are okay. You got to watch her, though, or she’ll slip you them stale ones.

“Taylor’s is the only grocery store. When it’s closed, you can get emergency stuff down at the gas station on the south end of town.” He pointed over the top of the steering wheel. “The Clothes Palace is over there, and that’s the drug store. Old man Davies owns it. We pick him up for D and D about once a month.”

Red slowed the car to let a pair of giggling teenage girls in cut-offs and tube tops cross the street, and they waved.

“Oh, man,” he said, “the jail bait around here is unbelievable in the summer. We get ‘em when they’re hopping between Corpus and Galveston.” He grinned at Jake. “You just missed the season.”

As they continued toward the coast, brown and yellow brick gave way to weathered wood
structures, and potholes speckled the road.

“Hippie Dan over there
,” he continued, “rents ski boats to the tourists in the summer.”

“Yep. Locals have their own boats. But the bay's too shallow for skiing anyway. There’s snags all over. We usually rip up one or two skiers a summer when they get too drunk to watch where they’re going.”

At the end of the road, Red barely slowed
at a stop sign. He swung the sedan left, swerved through a bumpy parking lot covered with crushed oyster shells, and skidded to a stop in front of a large wooden building, weathered gray and sporting a faded sign over the door declaring it
Coop’s Place
.

“Coop’s a crazy ol’ son of a buck, but he’s got the best food around. And wait ‘til you see his daughter.
Man
.”

Jake climbed out of the car, filled his lungs with heated
, salty air, and looked around. Trees grew in yards of rundown houses where it seemed every driveway held a boat of some kind.

According to the mayor, nearly two thousand people called Port Boyer home,
there couldn’t be more than a couple hundred residences within the city limits. Where were they all?

T
he only topographic relief included the highway passing a mile north of town and a slight rise to the west topped by a sprawling mansion.

"That's Tanner
Radisson’s place," Red said, following his gaze. "Local celebrity, used to be a movie star or something. Pretty much keeps to himself."

Red led the way toward the front door. "We don't have any great beaches or big industries, but we've got some pretty good oysters and all the fish you can eat."

The other thing Port Boyer seemed to have plenty
of was peace and quiet, which would be a pleasant change. At least for a while.

Jake glanced at two ragged pickup trucks in the parking lot. Three teenage boys—probably Vietnamese—stared at him from the bed of the farthest. The oldest
boy waved timidly. Jake raised a hand to return the greeting as he climbed the front steps.

Coop’s Place, a bar-
restaurant combination, held a few tables and booths, and a dozen or so well-worn barstools upholstered in black vinyl, and it sported windows on three sides of the building. The wooden floor creaked underfoot as Jake followed Red in. They walked past two men drinking Lone Stars at a table against the wall, wearing sour looks and ball caps over stringy hair.

At
the bar, Jake settled onto a stool beside Red.

Jake looked up to find a woman behind the bar frowning at him.

The woman, late twenties or early thirties, had dark blond hair pulled back into a tight braid, light brown eyes, and nice, full, pouting lips. Her tank top revealed muscular shoulders, browned by the Texas sun, and a figure that wasn’t at all bad.

“Now, darlin’, is that any way to treat the new guy?” Red asked.

She shot the patrolman a malicious glare.

The woman didn’t respond. She didn't look like a punk or druggie; he wondered what she had against cops.

Red grinned. “Got any of that nasty stuff you pass off as coffee?”

Heather Cooper filled two mugs and deposited them in front
of the officers with a scowl. Then she turned her attention to something behind the bar.

“Is your daddy around?” Red asked.

A man with graying whiskers and wild shoulder-length gray and brown hair dragged two large burlap sacks in through a back door and deposited them just inside. An
elderly Vietnamese man dressed in black cotton followed, dragging another sack of what sounded like oysters as they clacked together. Both men stopped at the cash register where the first counted out bills to the second, who then left the way he’d come.

The man with wild hair approached. “Hey there, Red.”

Jake shook hands across the bar.

Coop, in his tie-died T-shirt and cut-off jeans, offered an honest smile. "Welcome to Port Boyer."

“You have a place to stay?”

They all turned at the sudden crash of something slamming against metal outside, accompanied by angry voices.

Jake dashed to the door, followed by the rest of the bar’s occupants. He noted the now-empty table against the wall as he passed it.

The two men in ball caps stood with the elderly Vietnamese man between them, and took turns shoving him against one of the trucks. Yelling, the teenagers tried to stop the attack. The oldest boy charged the largest troublemaker, who sent him to the ground with an elbow to the gut.

“That’s enough.” Jake stepped into the middle of the mayhem. He blocked a punch as he pushed the older man to safety, and then turned to face the two agitators. The tallest one, closest, snarled as he lunged.

Jake stepped aside, snatched the man’s right wrist, and twisted it. He dropped him with a knee to the thigh, gripped the collar of his shirt, and then swung his prisoner around between himself and the shorter man.

Red joined the circle and shoved the second man’s shoulder, sending him back a few steps. “What the hell’s the matter with you two? Didn’t you see us walk in? Are you looking to spend the night in jail?”

Red shook his head. “These here are the Johnson boys,” he said to Jake. “This is Casey, and the one you’re holding is Lou. I think they’ve had a little too much sun today. Is that right, boys?”

Jake released Lou Johnson
to Red and turned to help the teenager to his feet. “You okay?”

The boy rubbed his stomach and nodded.

“This is the new chief, boys,” Red said to the Johnsons. “You two better watch your step around him. He’s from the big city.”

Lou and Casey dusted themselves off as if they’d just finished a friendly baseball game.

The Johnsons hurried to their truck, slammed the doors, and pulled out in a spray of shells.

The older man stood beside Coop.

“Are you all right?” Jake asked him.

“This is Tran Dinh Duc and some of his family,” Coop said. “Mr. Duc, this is Chief Starks.”

Jake asked,
“Do you want to press charges?”

The man shook his head adamantly, and then, without another word, herded
the boys into the pickup. The oldest of the boys got behind the wheel, backed the truck onto the road, and drove away.

Jake watched the truck
depart. “Is he old enough to drive?”

Jake turned to find Heather Cooper
staring at him from the bottom of the stairs, her frown now gone. She looked away as soon as their eyes met.

Coop led the group back into the bar. “How about a beer on me?”

Jake shook his head. “Thanks, but we’re on duty.”

The man’s eyebrows shot up in apparent surprise. He shrugged. “Okay.”

Red drained his coffee mug as Jake did the same. “Guess we need to move on,” Red said. “There’s still plenty to see.”

They also had a few things to discuss.

“Looks like the new chief knows how to handle himself.” Coop scratched his chin as he gazed through the front window.

Watching the police car pull out of the parking lot, Heather reached for the coffee mugs and stopped, surprised to find bills on the bar.

“And he pays for his coffee,” she said. “That’s a novel concept.”

Coop started for the back door.

“Hang on.” She pointed to the oysters. “Did you record those?”

He glanced back from the doorway. “Yeah, I wrote them down.”

“In the cash drawer, I think.”

“Aw, come on, Deuce, don’t give me a hard time. I’ve got to get back to the fish, or Skeet will skin me alive.”

Heather’s father hurried out, his shoulders drooping a little more than they had thirteen months earlier when she’d last left for school and his hair slightly grayer. Other than that, he hadn’t changed in years, which was both reassuring and frustrating. If only he could figure out how to take care of himself. She should be in her last semester and maybe even engaged. Instead, here she was running the restaurant again, her education in jeopardy and her love life shot.

Still, she co
uldn’t be angry with him. He was her father. And he meant well.

The screen door slapped the doorframe behind him.

Heather opened the cash register to find a folded paper napkin serving as proof of payment for three sacks of oysters.

“Geez, Coop.” How would she ever get this mess straightened out when he insisted on using trash for receipts?
She drew the ledger from under the counter.

Just as she finished recording the expense, Skeet ambled in.

The man nodded. He tossed a sack over one broad, dark shoulder with ease
and strolled out the back door headed for the cooler.

Heather returned the ledger to the shelf.
Another month and she should be able pay off the latest loan—get Coop back on his feet. Unfortunately, helping Coop was like righting a one-legged toy soldier. The man had been stuck in self-destruct mode for so long, he didn’t seem to know anything else.

Heather bussed the table the Johnsons had left. As she gathered empties and wiped the tabletop, she thought about the newest resident of Port Boyer.

Chief Starks, easily classified as good-looking, must be at least six feet tall. His dark brown hair was a little on the long side for a cop. He seemed to be in decent shape, but there was nothing spectacular about him until you got to his eyes. The man had the bluest eyes she’d ever seen.

In general, she had no use for the cops in Port Boyer, not after the way they’d treated Coop. And her, too, for that matter. But she had to admit, the chief looked
good in his tailored brown cotton shirt. He had very broad shoulders, and as he’d headed for his car, she’d noticed how nicely his jeans fit.

Shaking off the absurd thought, Heather carried bottles to the back and wiped her hands on a bar towel. They still had plenty to do before dinnertime. The last thing she needed
to be thinking about was a man. Especially Chief Starks.

Her father popped up to peer over the back porch. The cigarette hanging from his lips sent blue smoke circling his face. He held a beer bottle in one bloody hand and the fish knife in the other. “Yeah?”