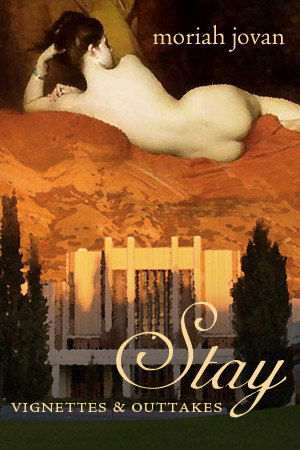 HOW BUSINESS GETS DONE
The unveiling of
Wild, Wild West

The cute little brunette sat toward the front of the lecture hall, so Eric wasn’t quite sure he wanted to sacrifice professorial invisibility for a chance at
that
, but at this point, he couldn’t afford to be picky. He was an obvious foreigner in the Land of Gorgeous Girls. This may be as close as he got to one of them.

Eric slid into the seat beside her, jostling her a little to make sure she noticed him, but she was bent over her Book of Mormon with a red pencil.

“Hi,” she replied vaguely as she underlined something. Her book was her own, not the cheap little hardback he’d picked up at the bookstore, as evidenced by the fact that it was leatherbound, dog-eared.

Dirk, do these girls just take one look at me and know I’m not a Mormon?

It’d only taken him two days after moving into Deseret Towers, touring campus, buying books, exploring Provo before school started for Eric to understand he was far more than a fish out of water. He was a whale beached in the middle of the Sahara.

You’re dressed the same way I am. Got my fucking hair cut, too.

Suck it up, princess. Fact of life: A good quarter of these girls come from southern California, they’re rich, and they’re used to good-looking assholes.

I said you were smart, not that you weren’t an asshole.

Not another word, Eric. There’s a reason I’m leaving you here and if you have an ounce of common sense, you’ll figure it out before you graduate and exploit it to its limit. And for what it’s worth, I couldn’t get a date in SoCal to save my life.

Why the hell not?

My roommate. He was crawling in girls and I kind of blended in.

Dirk’s black. You’ll see what that means for him.

No, it’s not racist. It’s reality. Give him a week, he’ll be a fucking rock star.

Does he know that?

I don’t even know what that means, “take to the temple.”

You’ll find out soon enough. Let’s go get your books. Shit, I love being back here. It’s like coming home.

Even after. Nobody here knows. I’m just a nice, regular Mormon guy here.

But you’re not Mormon.

You’re
never
not Mormon once you have been.

Yeah, so first day of classes, second class. American history. He’d gotten about as close to a pretty girl as he could and she didn’t seem interested in the most rudimentary conversation.

BYU’s on a trimester system. What you do is, you go year-round and shave a year off your undergrad.

Eric sighed and slid down in his seat, crossed his arms over his chest, and glared down at his books, trying not to feel so very...
alone
. A different alone than at home, where he was alone but known. Known and wanted. Known and feared.

This was...alone and unknown. If he disappeared, no one would know. No one would care. Likely only Dirk would think to notify Knox and even then...

Eric’s head snapped left to see her looking at him with a sweet curiosity. “Eric,” he said gruffly.

“What tribe are you from?”

He blinked, astonished that she’d picked him out so fast. He wasn’t used to looking
Indian
in short hair. His mother had certainly disapproved when she’d seen his haircut.
You look Italian
, she’d said flatly.
Just like your father
.

“I’m from Arizona.” She said that like it should mean something to him. “Where are you from?”

“Oh, I didn’t know there were reservations in Kansas.”

He stared at her, unbelieving. “You just said the three most ignorant things I’ve ever heard,” he said, his astonishment growing when she flushed hotly and looked down at her books. He might have arisen to go find another seat toward the back, but the lecture started and he was still unsure enough that he didn’t want to risk it.

The professor, a woman not much older than Eric and possibly the most beautiful woman he’d ever seen, spoke passionately about... something...which he couldn’t be bothered to care about since she had a nice ass and nicer tits. In his previous life, he was pretty sure he could’ve had a piece of that. It wasn’t as if he hadn’t fucked a hot young teacher or two in his life. At the same time.

Then she was talking to him.

“Eric,” he said, cocking his eyebrow at her, but she didn’t seem to get it.

“Am I mistaken in thinking you’re a Lamanite?”

He stared at her, his mind suddenly blank. What the fuck? A lame what?

“Serious?” said the professor, tilting her head at him. “Missouri, Nebraska, Kansas. Tribe headquartered in Oklahoma. There’s a Fort Osage in Independence.”

“The Osage were a brilliant people who had a sophisticated alphabet and grammar...”

She moved away from him as she lectured to the hall about the Osage. Eric forgot about her tits and ass as he grew enraptured by her monologue, the respect in her voice as she spoke of his people and for the first time ever in his life felt pride in his heritage—

—because someone else did.

He’d never known that before.

“A Lamanite,” whispered Heather in his ear, startling him, “is a Native American. That’s what we call them.”

His eyes narrowed at her.

“Look, I’m sorry, okay? I don’t know what I said that was ignorant, but I’m sorry I hurt your feelings.”

Funny. He didn’t know he had feelings or that they could be hurt, but she seemed so distressed that she had he didn’t know if he were more flattered or confused. He couldn’t decide whether to stay mad or not.

No one had ever cared enough about his anger to be distressed, just afraid.

“What’s your tribal name?” asked the professor, shaking his attention from Heather and back to the lecture.

“I don’t have one,” he said slowly, for the first time regretting that. “My name is Eric Niccolò Cipriani.”

“I’m half’n’half,” he muttered, all of a suddenly wanting that invisibility that now seemed as much friend as foe. “Osage and Italian.”

“And what a
nice
combination it is,” came a husky female voice from the back, which set the class to laughing. Eric’s mouth twitched. Embarrassed, pleased, he glanced at Heather, but she stared down at her notes. The professor went on with her lecture as a drop of water splashed onto Heather’s notes and smeared the ink. He gulped.

“Hey,” he whispered and nudged her with his shoulder. “It’s okay. I’m not mad. Wanna have lunch? My treat.”

She smiled at him shakily. “Okay.”

Suddenly he wanted to kiss her. Right then, in the middle of the class, to make her tears go away. It wasn’t the same type of tears he’d confronted before. Those were tears of girls who wanted to manipulate him or girls who hadn’t understood beforehand that he was only interested in one thing. These were tears of remorse for “hurting his feelings” with a careless remark she still didn’t understand why it was careless. He wanted to kiss her to let her know he meant it when he said he wasn’t mad at her.

It was then he made a startling discovery.

He was talking to a genuinely nice girl.

And he liked it.

After class, they started out toward “the Wilk”—

“Student union,” Knox had told him on his tour, explaining what college life was about because Eric had no frame of reference for college whatsoever, except what happened in a frat house on the weekends.

“Okay, so what did I say wrong?” she asked after a tense silence.

“Well,” Eric replied, trying to make his voice as nice as possible, because she would probably cry if he used his normal level of sarcasm. “First you assumed I come from a reservation. I don’t. I come from a trailer park on the wrong side of the tracks, yeah, but not a reservation.”

She took a deep breath.

“Second, you assumed Kansas City’s in Kansas. Which it
is
, but the Kansas City in Missouri’s four times bigger.”

She looked at him sharply. “There’s a Kansas City in Missouri?”

“Yeah. Third, you assumed there weren’t any American Indians east of the Rockies. And I don’t know what being from Arizona has to do with anything.”

“Lots of Native Americans where I live. Navajo. Apache.”

“You’re not...all that interested in your people, are you?” she asked hesitantly.

“No. I’m just a non-Mormon punk kid way out of my league here,” he said bluntly, more confused by the fact that that had come out of his mouth than concerned that he might have revealed more than he wanted to to this girl he didn’t know. “I didn’t even know what Mormons were until last year.”

“Then how did you get here?”

He shrugged. “Long story. Don’t wanna tell it. I just...need a little help.” Admitting
that
killed him for sure.

“I’ll help you,” she said, a new brightness in her voice he liked. It wasn’t like the cheerleader/rodeo queen brightness Annie faked when she was “on.” It was sincere. Genuinely happy for no reason he could ascertain.

She shrugged. “I think you’re nice.”

Nice.
That was a new one. Annie would laugh her ass off. “I’m not a nice guy,” he said flatly. “Really.”

It occurred to him he probably should’ve told Annie where he was going before he took off. He made a note to write her a nice letter. If he could remember her address.

“You’re here so that means you’re wanting to make a new start. Do something different, right?”

“I’m here ’cause if I wanted to go to college, this was my only option.”

She stopped. He stopped. “That makes no sense.” She looked up at him, awaiting an explanation, and he thought he could lose himself in those clear brown eyes of hers. He looked at her full lips and licked his lower lip. He bent and—

She ducked out from under him and said, “I don’t think so.”

Eric stared at her as if she’d lost her mind.

“It doesn’t work that way here,” she murmured, walking backward, tugging him with nothing but the power of her potential companionship.

“I thought you said I was nice.”

“I believe you to be. Somewhere in there.”

Oh, so she
did
get it. He wondered how long it would take to break down her walls. A week. Maybe two.

“I want to be your friend.”

He felt his face contorting in utter confusion. “My
friend
?” he echoed. “What the hell does
that
mean?”

“Please don’t swear at me.”

What the fuck? Hilliard swore like a sailor and he was a Mormon. Or almost. If they hadn’t kicked him out.

Eric sucked up a deep breath, but how could he refuse this girl anything? She was unlike any girl he’d ever met, ever known. “Okay,” he said on a breath.

So they got their food and Eric flipped out the credit card Knox had given him—
Your room and board is paid. Two-fifty a month ought to keep you in fun money and anything you might need for school if you’re careful. Call me if you need more.

The War of the Roses by Warren Adler
Sergey: Love Me Harder by Serena Simpson
An Island Between Two Shores by Graham Wilson
Blackbriar by William Sleator
Passion And Fire (Passion #4) by J. A Melville
Damage by Robin Stevenson
Gina's Private Police Force [Men of Montana 3] (Siren Publishing Menage Amour) by Eileen Green
The Long Count by JM Gulvin
Enforcer by Hill, Travis
Undone by Karin Slaughter
Our partner