Stink and the Incredible Super-Galactic Jawbreaker 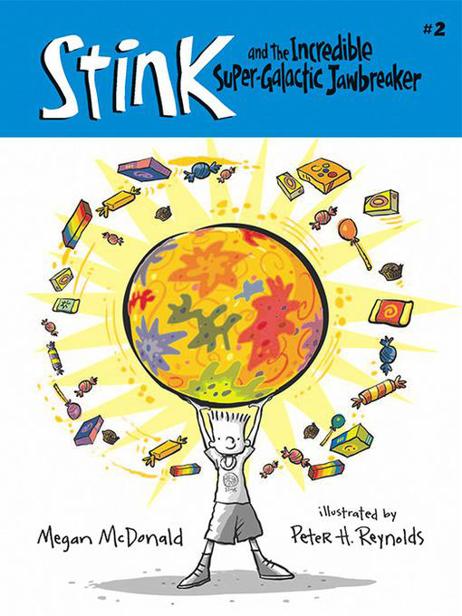 This is a work of fiction. Names, characters, places, and incidents are either products of the author’s imagination or, if real, are used fictitiously.

All rights reserved. No part of this book may be reproduced, transmitted, or stored in an information retrieval system in any form or by any means, graphic, electronic, or mechanical, including photocopying, taping, and recording, without prior written permission from the publisher.

The illustrations for this book were created digitally.

Kid in a Candy Store

A Leopard Can’t Change Its Spots

When It Rains, It Pours

Mad As a Hornet

A Leopard Can Change Its Spots

Then he saw it. Right smack in the middle of it all.

Super-galactic jawbreakers! Stink reached to pick one up. It was an earth, a globe, a world unto itself. A speckled, sparkling planet. Bigger than a marble. Bigger than a Super Ball. Bigger than a golf ball. World’s largest jawbreaker! Or at least the biggest Stink had ever seen in his whole entire seven years on the planet.

Stink’s sister, Judy, ran up to him. “Look, Stink, they have bubblegum baloney and lollipops that play music and real-and-true rain-forest gum and best of all . . . gummy brains! I can’t decide WHAT you’re getting me!”

“Your brains are gummy if you think I’m buying you stuff,” Stink told his big sister. Sometimes big sisters were so double-triple-quadruple bossy.

“C’mon, Stink. Don’t be a sourball. You have a big fat five-dollar gift certificate.”

“I earned it! Dad took me to the college, and I was in a study for short people. I had to answer really hard questions.”

“Stink, I can’t help it if I’m not short! Please, pretty please, with gummy brains on top? Just one candy cell phone? Purple candy corn? A diamond-ring lollipop? I know, I know! If you won’t buy me candy, how about this How-to-Make-Your-Own-Gum kit?”

“C’mon, Stinker. Just one teeny-weeny piece of candy? How much can one piece of penny candy cost?”

“Huh? How can something that costs a penny cost a quarter?”

Stink’s sister, Judy, was in a mood. She slumped down on the car-seat couch in the corner of the candy store. She pretended to watch the Oompa-Loompas dancing on the TV screen in front of her. Stink popped from one shelf to the next, filling his basket with suckers and sourballs, gumballs and gummy worms.

“Id-i-om. It’s what you call a funny saying. Mrs. D. taught us a bunch of them. Like if you’re in a bad mood, I could say you got up on the wrong side of the bed.”

“But I’m not in a bad mood, because you’re going to get me some candy, right?”

“Is
stinks on ice
an idiom? How about
rotten to the core
?” said moody Judy.

“Now you’re acting like sour grapes,” said Stink. “Get it?
Sour grapes
is another idiom.”

Judy rolled her eyes. “How about one Grouchy pencil and two president baseball cards for this box of rain-forest gum?”

“
Three
president baseball cards,” said Stink. “And one of them has to be James Madison.”

“Deal,” said Judy. “Goody goody gumdrops! Thanks, Stink. Now, Richie Rich, let me see what you’re getting yourself with all that money.”

“I,” said Stink, “am getting the World’s Biggest Jawbreaker.” He held it up for Judy to see. “It changes colors and flavors as you go.”

“Rare! It looks like an earth. Or a giant emu egg or something.”

“Or something,” said Stink.

“Stink, I don’t think you want to eat that. Says here on the box that it contains wax.”

“Does too!” Judy pointed to the words on the box.

“Stink, wax is like candles,” said Judy. “Wax is like earwax. Are you going to eat EARwax, Stink?”

“Give it,” said Stink, taking it back. “Stop saying
earwax
! I’m still eating it. It has fire in the middle.”

The Unforgettable Hero by Valerie Bowman
Imaginary Girls by Suma, Nova Ren
Branded by a Warrior by Andrea Thorne
Darkwing by Kenneth Oppel
Anna: Bride of Alabama (American Mail-Order Bride 22) by Lily Graison
Ironbark by Jonsberg, Barry
Why I Quit Zombie School by R. L. Stine
Silent Treatment by Michael Palmer
The Last Days of Wolf Garnett by Clifton Adams
Between The Sheets by Caddle, Colette
Our partner