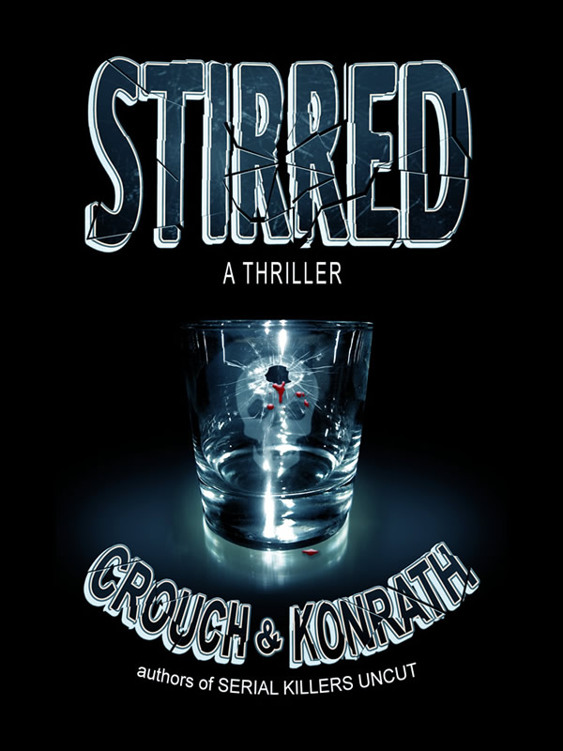 Text copyright © 2010 Crouch & Konrath. All rights reserved. No part of this book may be reproduced, or stored in a retrieval system, or transmitted in any form or by any means, electronic, mechanical, photocopying, recording, or otherwise, without express written permission of the publisher.

S
tirred
was written as a standalone thriller and requires no prior knowledge of either Crouch’s or Konrath’s respective bodies of work. It is the conclusion to J.A. Konrath’s Detective Jack Daniels series and Blake Crouch’s Andrew Z. Thomas/Luther Kite series.

In Stirred, the reader will come across occasional hyperlinks when a character first appears, or when a passage in the story refers to a novel in the Crouch/Kilborn/Konrath Universe. Clicking on this underscored text will take the reader to a brief description of either the character or the referenced novel, for those interested in getting more information, clarity, or explanations of past events. However, these links are in no way necessary to understanding and enjoying the Stirred storyline.

Our goal is to provide the reader with a complete picture of the thirty-nine stories, novellas, and novels that comprise our interconnected body of fiction, and the e-book format has given us the opportunity to unify our works in a way that has been impossible in the print world.

We hope this state-of-the-art feature enhances your enjoyment of Stirred, and crystallizes your understanding of the Crouch/Kilborn/Konrath Universe, 1.85 million words and growing…

“Midway upon the journey of our life I found
myself within a forest dark,
For the straightforward pathway had been lost.”

For starters, too old. Forty-five or forty-six, she guessed—almost fifteen years her senior—and as a rule she didn’t date men with long hair. Blame it on the lingering, private shame she still harbored from her early-nineties Michael Bolton phase.

Worse, he’d come at her with no game at all.

Had simply sidled up behind the vacant chair beside her and asked, “Would you mind if I sat here?”

And yet, here she was, almost four hours later, still talking with him at the bar in the Publican and letting him buy her another glass of the excellent New Zealand sauvignon blanc she’d been drinking all night.

As the bartender set a fresh glass in front of her and poured from the bottle, she figured it was Rob’s eyes that had kept her in the chair, kept her from just slipping out the next time she excused herself to go to the little girls’ room, a trick she’d pulled so many times before. Rob’s eyes were black and intense for sure, but they were also listening eyes. She hadn’t met a man like him in years. Most of the bores who hit on her might have presented a better exterior package—thousand-dollar suits and cologne and all the metrosexual accessories a single, successful man in Chicago was expected to flaunt—but they were also, almost without exception, unimaginative, self-obsessed bores.

Admen, lawyers, executives, the occasional fund manager who apparently thought she’d come downtown to hear every excruciating detail of his new boat and winter condo in Aspen, or what an adrenaline rush it was—“like a drug, like sex, you know, babe?”—to do whatever it was he did with other people’s money.

No, Rob was different.

Most nights when she took herself out looking for Mr. Right, she rarely spoke. Just sat there and sipped wine and listened politely until she couldn’t stand another moment of feigning interest.

But tonight
she’d
done most of the talking, and he’d seemed genuinely interested as she rambled on about her job at Fireman’s Fund Insurance Company, where she worked as a claims representative.

He’d asked smart questions, and not just about the current job, but about her future goals, where she wanted to be in five years, in ten.

And he wasn’t
that
bad looking.

Could’ve dressed a little nicer for a place like this, but in truth, his faded jeans, black cowboy boots, and plaid button-down only underscored the overall vibe she was getting from Rob.

This was a real guy and probably out on the town for the same reason she was—to meet someone who might bring meaning to what had become the almost unbearable monotony of her day-to-day existence.

The bartender, a heavily pierced and tattooed young man who barely looked old enough to sell alcohol, stopped in front of them and said, “Just to let you guys know, we’ll be closing in ten minutes. Get you anything else?”

Rob glanced over at Jessica. “One more before they kick us out?”

Jessica looked at her wineglass—still a few sips left, though she would’ve loved one more since the bursts of passion fruit and lime were going down all too smoothly. But she didn’t want to come off as a lush on what was turning into their first date.

I Like Big Dragons and I Cannot Lie (The I Like Big Dragons Series) by Lani Lynn Vale
More Than Forever (Providence Series Book 2) by Moore,Mary B
The Omega Team: Cyber Tracked: The Cobra Project (Kindle Worlds Novella) (IATO Series Book 4) by Eliza March
Delivering Death: A Novel (Riley Spartz) by Kramer, Julie
Know Your Heart: A New Zealand Enemies to Lovers Romance (Far North Series Book 2) by Tracey Alvarez
Married to the Bad Boy by Letty Scott
Forgive Me by Daniel Palmer
An Old Betrayal: A Charles Lenox Mystery (Charles Lenox Mysteries) by Charles Finch
The Sunshine Dame of Doom by Fizzotti, Marcos
Daybreak by Keira Andrews
Our partner