Read Stuff to Die For Online

Stuff to Die For 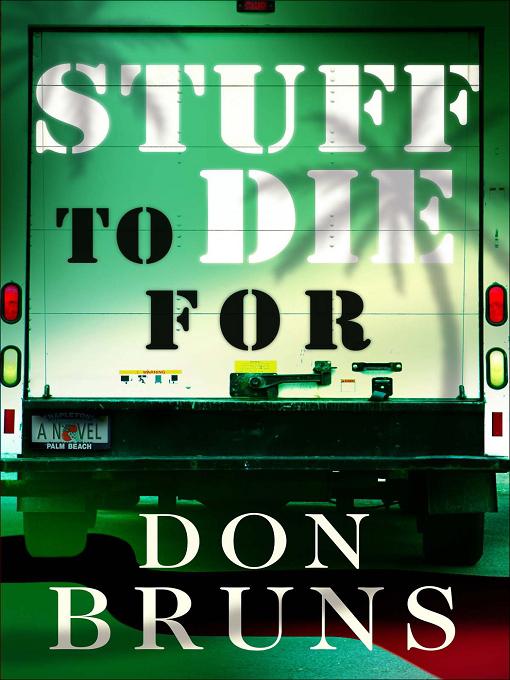 Stuff to Die For

Chasing the American Dream could leave you running for your life. Best friends James Lessor and Skip Moore are hardly on the fast track. While James works as a line cook at Cap'n Crab, Skip spends his days selling—rather attempting to sell—security systems to people who have no money and have nothing they care to protect.

James and Skip aren't upwardly mobile, but they're about to get literally mobile when James spends a surprise inheritance on a white box truck. An investment in the future, he surmises, as these two are starting a business. Moore and Lessor, or Lessor and Moore. Have Truck Will Haul.

But the fledgling business takes a shocking turn when James and Skip unload the contents of their first moving job and find some unexpected cargo—a bloody human finger.

As James and Skip scramble to stay one step ahead of the perpetrators of a gruesome crime, they'll learn that there is some stuff you should never touch—and some stuff to die for in this witty, gritty mystery about big dreams, big ideas—and big trouble. 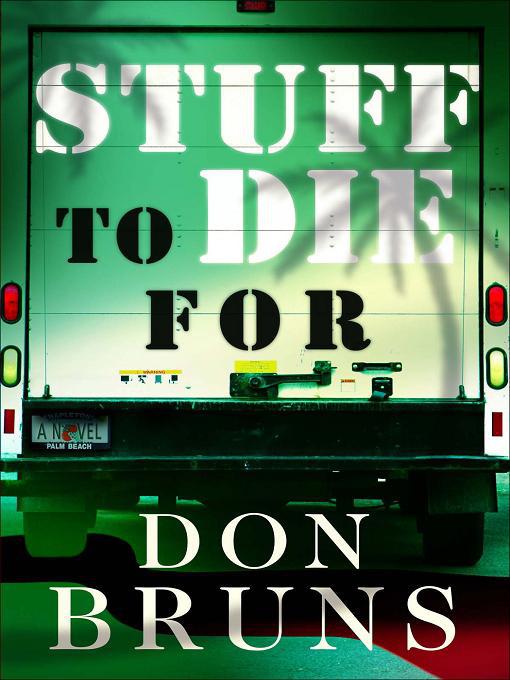 STUFF TO DIE FOR

A Stuff Mystery
Book 1 in this Series

To my kids and their generation.
No matter how old you are,
there are still some things
you never figure out. 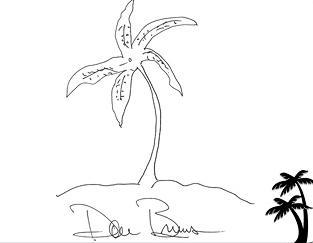 Thanks to my friend, Tom Biddle, for the use of his Miami condo, to Captain Bob Bijur and Haley Sofge with Island Queen Cruises, to Doctor James Kahn for his technical expertise, to Don Witter, Jay Waggoner, Dave Bruns, Nancy Olds, and Linda for taking the time to read the manuscript, to the folks at Bayside for their interest and help, and to Rodger McClain for steering me straight. Here’s to Jason and the guys at Big Guy Media for the movie trailer, and to Fred Rea, king of movie quotes. Thanks to the wonderful crew at Oceanview Publishing, and especially to the booksellers and librarians who promote mysteries and make all of this possible.

Finally, a toast to the Miami River, the hardest working river I’ve ever sailed.

T
HE BRIEF ARTICLE about Salvidor Santori’s death appeared in the
Miami Herald
. When I read that they’d found his body on top of the Colony Hotel on Ocean Boulevard in South Beach, I paid a little more attention to the story than I normally would have. Santori had twenty years in the CIA with extensive training in espionage. This guy was used to the cat-and-mouse game, spy vs. spy. I read the story with interest, wondering if the death was really relevant to all the crap James and I had been through.

Maybe his murder was an isolated incident, but James, Em, and I had been
this
close to being killed, and in the process I may have lost the greatest girl I’ve ever known. So I thought about the story for a while, and I believe I know why Santori died. I even have a good idea who killed him. Actually, after all that happened to us, I have a
real
good idea of how Santori died.

If you ever get a chance sometime, take a walk down Ocean Boulevard, and watch the slow parade of luxury cars as twilight settles on the colorful Art Deco district in Miami. It’s fun, it’s entertaining, and it really makes you feel alive. I used to view the fancy clubs, the swanky restaurants, and the crazy people and think all things were possible. You just had to use your imagination.

It’s just that I never, in a million years, could have ever imagined what
did
happen.

B
ELIEVE ME, WHEN JAMES FIRST SUGGESTED we start a hauling business, I would have said no way in hell if I’d known we’d be hauling a human body part. And then to be accused of kidnapping and murder? But I’ve only got myself to blame. I’ve known from the start that James Lessor could get into more trouble than any ten people. I just keep forgetting that he’s always dragging me in with him.

I met James in the third grade. Even then it was never Jim or Jimmy. His name was James, he’d tell everyone. “James, like in the King James Bible.” And if a third grader could be arrogant, James was arrogant. And ambitious. I met him in Mrs. Waggoner’s class when he bilked me out of fifty cents on the stone playground by offering to be my best friend for the school year. Fifty cents for the year seemed like a good bargain, and having someone who knew the ropes like James as my best friend seemed like a no-brainer. Then I found out that twenty-five other kids paid the same price for the same privilege.

I don’t know where those twenty-five kids are today, but James and I
are
best friends. And he’s still scheming, working on the next get-rich-quick idea. When we were fourteen years old, he borrowed his dad’s video camera and we went to the movie theater in Miami Lakes, over by the Pep Boys auto parts store. It was a hot, sticky South Florida day and James had on this trench coat that was three sizes too big. I tagged along and we must have looked like quite a pair, James with a bulky video camera hidden under his coat, and me with a pair of shorts and a T-shirt. We bought tickets to
Barbed Wire
with Pamela Anderson, and as soon as the previews were over, James pulled out the camera.

“We’re gonna sell copies to everyone in school, Skip. A hundred kids buy the movie at five bucks a crack, we make—”

“Yeah. Five hundred bucks.” He got a big grin on his face.

We crouched in our last row seats and he flicked on the camera. That’s when the hand grabbed his arm and the manager of the theater yanked him from his chair.

The police officer in the lobby gave us a warning, and we were banned from the theater for life. The manager quit his job the next week and within ten days we were back watching movies—minus the trench coat and camera.

He talked me into at least ten other business ventures between the third grade and now, but none of them panned out, and half of them got us into trouble. And none of them involved terrorism, mutilation, subversive government plots, or torture. Until now.

So why is James Lessor still my best friend? Because I admire him. He’s got the—what do the Jews call it? Chutzpa? He’s got the balls to go out and make things happen, and for some reason that appeals to me. Probably because I’m not a self-starter. I need a James Lessor, and he needs a Skip Moore to rein him in now and then. Obviously, I should rein him in a lot more than I do.

I have to admit I got fired up about some of his ideas, and I probably wouldn’t have gone to college if he hadn’t decided we needed to be restaurateurs. You see, James is a marvelous cook. I don’t know what sparked his interest, but about the seventh grade he was whipping up inventive omelets with apples and cheddar cheese or mushrooms and salsa, and then he graduated to seafood dishes like imperial crab and deviled oysters. He loves screwing around in the kitchen, and being his best friend and someone who enjoys the process of eating, I am a beneficiary of his sizable talent.

“We’re best of friends. Have been since either of us can remember, so I know you as well as you know yourself. Am I right?” Lessor was in his sales mode. He should have been the one selling security systems. I wasn’t making any headway at it, and he was always selling some dream or scheme and convincing me we should try something new. With his sculpted face, wavy hair, and crooked smile, James could convince just about anyone of anything. As I said, it was James who convinced me to go with him to Samuel and Davidson University in North Miami.

I’m constantly reminded of how it started six years ago. It was a hot, sweaty night and we were sitting in his rusted out, formerly red Chevy pick up truck behind Gas and Grocery, two thirds of the way through a six-pack of lukewarm Budweiser.

“It’s like he’s still with me, Skip. He’s over my shoulder telling me to quit fucking around and get serious about life.”

“Don’t all parents tell their kids that?”

He flicked the ashes of his cigarette out the busted window that never rolled up and popped open his last can. You could always smell the pines that grew in a clustered grove beside the small concrete block building that was Gas and Grocery.

My dad left our family when I was twelve. James’s dad had left this world just six months shy of our high school graduation. That’d be six years ago.

He leaned his head back and let half the liquid gurgle down his throat, belching loudly. “Christ, I wish I could talk to him. Find out where he fucked up. I never really wanted to talk to him before, you know? He was just my old man. I was embarrassed for how it ended, but now—”

He let it hang.

His old man. Oscar Lessor. Tried to start one hundred different businesses, and the last effort landed him in jail.

“All those schemes, all those businesses he started. He never amounted to shit.” He stared through the windshield, focusing on something in the dark.

“The mechanic shop, the vending route, home dry cleaning, Amway—I don’t even remember half of them. He was a loser, Skip.”

Linda Barlow by Fires of Destiny
The Infected Dead (Book 3): Die For Now by Howard, Bob
BUCKED Box Set: A Bull Rider Western Romance by Taylor, Alycia, Adams, Claire
Solbidyum Wars Saga 4: Too Late for Earth by Dale C. Musser
Hundred Dollar Baby by Robert B. Parker
If You Were Here by Alafair Burke
The Juliet Stories by Carrie Snyder
Steel Maiden by Kim Richardson
What Dies in Summer by Tom Wright
Wickham's Diary by Amanda Grange
Our partner