Read Surrender to Me Online 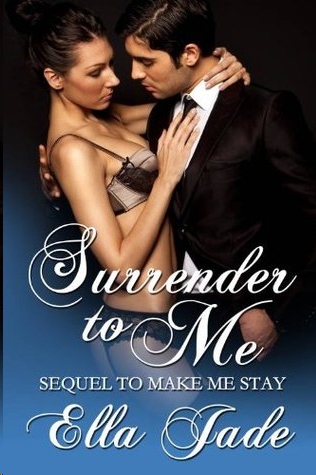 eBooks are not transferable. No part of this book may be used or reproduced without written permission, except in the case of brief quotations in articles and reviews.

What happens when a Dominant falls for his not-so-submissive attorney?

Sassy lawyer Arianna Covington relocates to New York City after a humiliating divorce. She’s looking for a fresh start when she agrees to become Martin’s exclusive attorney. She’s intrigued by his domineering personality and wants to know why women kneel at his feet.

Their attraction is undeniable despite Ari’s initial beliefs that she will never submit to Martin’s desires. But Martin is up for the challenge. Arianna is more than he ever imagined in a woman. He vows to claim her heart, with or without the games. Who will surrender first?

Featuring Cade and Gracie from
Make Me Stay
.

To Team Ella… I know we’re just getting started, but as far as Street Teams go, you guys are the best!

Thanks to all of my readers. When I started this writing journey a few years ago I had no idea anyone would want to read my tales. You flatter me each and every time you get lost in my words.

To Beachwalk Press…thanks for taking yet another chance on me.

Martin Abrams leaned against the swanky granite bar, sipping his scotch. He didn’t like being out on a Monday night, but he’d agreed to meet his friend Hunter Covington and Hunter’s lawyer cousin, Arianna. His attorney’s retirement put him in the market for a new one and Arianna Covington came highly recommended. She was a partner in a large law firm in Philadelphia for three years before coming back to New York to open her own practice. Contract law was her specialty, and she wanted to build a client base in the city. Martin needed a new attorney for some property he wanted to acquire, so their meeting was mutually beneficial.

He glanced at his watch. Twenty minutes late. Not the best way to make a first impression, but since Martin knew Hunter well, there must have been a good reason for them to keep him waiting. Patience was not an attribute Martin would normally associate with himself. He pulled his phone from his jacket and checked his messages while he waited. He smiled when he saw a text from Gracie Jameson.

He shook his head and laughed quietly to himself as he replied.

Does your Master know you’re texting me with such sweet sentiments?

Through the years, Martin had become somewhat of a Dominant and submissive matchmaker. People came into his club seeking his advice. He helped pair them up according to their specific needs. He was adamant about there being no abuse in his circle. He’d seen too many submissives hurt both physically and emotionally through the years. His club was a place where people in the community could feel safe and secure in their lifestyle.

There was something about Gracie that called to him. She held a special place in his heart. Not only did he train her, but he cared deeply for her. But she was never his to keep. Her heart belonged to Cade Jameson, a man who could dominate and love her in ways Martin never could. In a capacity Martin wasn’t meant to.

Cade told me to text you. He knows I miss you.

He sipped his scotch.

Maybe a visit is in order? I’ll come and see how you and Cade are progressing.

Please! The playroom is almost finished and we want you to see it.

I’ll fly in next week, sweet girl. I’ll make the arrangements with Cade.

He’d been meaning to get out to Boston to visit them. He hadn’t seen them since the wedding a few months earlier, where he’d had the honor of giving her away.

Thank you! Love you lots!

Gracie wasn’t meant to stay Martin’s submissive forever, but part of him still missed her in his everyday life. He was happy for her, but her absence caused a huge void in his life. One he hadn’t been able to fill since she’d left.

“Martin.” Hunter made his way toward the end of the bar. “I’m sorry we’re so late.”

“You know how I feel about waiting.” Martin tucked his phone in his inside jacket pocket and looked up at the tall, fit man who stood before him. “I was just about to leave.”

“It’s my fault, Mr. Abrams.” A stunning woman stepped out from behind Hunter. Her tall, thin, and leggy appearance drew his gaze to her immediately. Her crisp, navy pants suit hugged her in all the right places. The white silk blouse peeked out from beneath her jacket and buttoned to just above her breasts, revealing the slightest hint of cleavage. Her copper hair was pulled back into a sleek ponytail, accentuating her high cheekbones, and then there were her eyes. They were the most alluring shade of green he’d ever seen.

Martin extended his hand. “You must be Ms. Covington.” Martin hadn’t pictured Hunter’s cousin to be so young and attractive. He’d assumed she was older than Hunter. Not that he had any reason to think so, but when he researched her background, she’d seemed so accomplished. Martin assumed she was closer to his own age. He was forty-four, but this woman looked to be at least ten years younger than him. She was a welcome change from Asa Weichert, his eighty-year-old former attorney.

“I apologize for our tardiness.” She took his hand and gave it a firm shake. Martin didn’t expect her to be so confident, but then again, the women he dealt with would be on their knees, not staring directly into his eyes. “I had to take an urgent call and I made us late.”

“I tried to explain you don’t like to be kept waiting.” Hunter pulled out the stool and motioned for Arianna to sit next to Martin. “She’s stubborn.” He rolled his eyes. “Not at all like the women we surround ourselves with.”

Like Martin, Hunter was a Dom. He was a member of Martin’s inner circle and frequented the club on a regular basis. Hunter didn’t have a permanent sub and hoped Martin could find him a match. Bringing a potential pairing together wasn’t something Martin took lightly. He had to be absolutely certain the arrangement would work before he brought anyone together on a lasting basis.

“What would you two like to drink?” Martin asked.

“You can call me Ari, and I’ll have a sparkling water.” She ran her hand along her ponytail, and Martin couldn’t help but think what it would be like to tug on it during a heated encounter.

Martin motioned for the bartender. “My guests will take a sparkling water and a scotch.” He tapped at his own glass, indicating he was ready for a refill.

“My cousin tells me you need a new attorney,” Arianna said. “I’d like for you to consider me.”

“You get right to the point.” Martin sipped his scotch. “I like that.”

“Why waste time?” She nodded at the bartender when he placed her drink in front of her. “You need an attorney and I’m taking new clients.”

“I deal with a lot of real estate in the city. Do you think you can handle that? I’m extremely demanding.”

“I can probably handle everything you throw my way.”

“I know you’ve seen my credentials and reviewed my history. I’m confident I won’t disappoint you.” She continued to stare into his eyes. Her boldness intrigued him.

“You can’t be late again. I don’t tolerate it well.”

“Sometimes business can’t be helped.” She challenged him by throwing his earlier words back at him. “You said so yourself.”

“So I did.” He smirked but now it was time to show her who was in control. “But that was when you were someone else’s attorney. As of tomorrow afternoon you’ll be mine exclusively.”

“What?” He saw the confusion in her striking emerald colored eyes.

“I told you I’m demanding, and I’ll need your undivided attention. I know you’ve just gotten settled here and you don’t have many clients. I require much attention. My business is thriving and I need an around-the-clock attorney.”

Hunter shook his head and smiled into his drink. “I told you he was different.”

“I’m quite certain you can.” Martin handed his credit card to the bartender. “I’ll compensate you well for your time, Arianna.”

“Why would I want to do that when Arianna is such a beautiful name? I couldn’t possibly use a nickname.” He signed the tab. “If you’re interested in my offer, contact me tomorrow. If I don’t hear from you, I’ll assume you have declined.”

Arianna glared at her cousin.

“You can’t pass up this opportunity,” he told her. “Martin is big time.”

“You can take the evening to think about it,” Martin said. “I don’t mean to rush you, but I’m in the middle of acquiring a prime piece of real estate by the river and I need to move quickly.”

Martin hoped her decision would be the one he wanted to hear.

“Very well,” he said. “Can you meet me tomorrow morning to go over the details?”

“If I could have tomorrow morning to let my clients know I need to make other arrangements for them then I can focus all of my attention on your contracts. Perhaps tomorrow afternoon?”

“I have a meeting and then I’ll be at my club in the evening.”

“Ari can meet you at the club. She doesn’t mind.” Hunter looked at his cousin. “Do you?”

“I should hope not.” Martin moved away from the end of the bar wondering what Hunter’s stake in all of this was. “Ms. Covington.” He took her hand, never taking his gaze from hers as he kissed her knuckles. “Until tomorrow.”

Martin smiled as he released her hand. “Hunter, will you see me out?”

The man stood and excused himself before following Martin to the exit.

“I’m still working on a permanent submissive for you.” Martin wanted Hunter to know he hadn’t forgotten his request. “Do you need someone to play with this weekend?”

“Nah, I like hanging out at the club and observing the scenes. I’d rather wait until you find someone for me.”

Hunter had expressed interest in settling into a permanent arrangement with his sub. He wanted total control over all aspects of her life. He was tired of sub-hopping and wanted a woman he could take care of every day of the week.

“I want to make sure we find you exactly what you need.”

“Like I did with your new attorney?” Hunter nodded in his cousin’s direction. “Were you surprised?”

“I wasn’t expecting such an exquisite woman.” Martin glanced at the bar, taking in Ms. Arianna Covington’s beauty once again. “Why are you so adamant she take the job?”