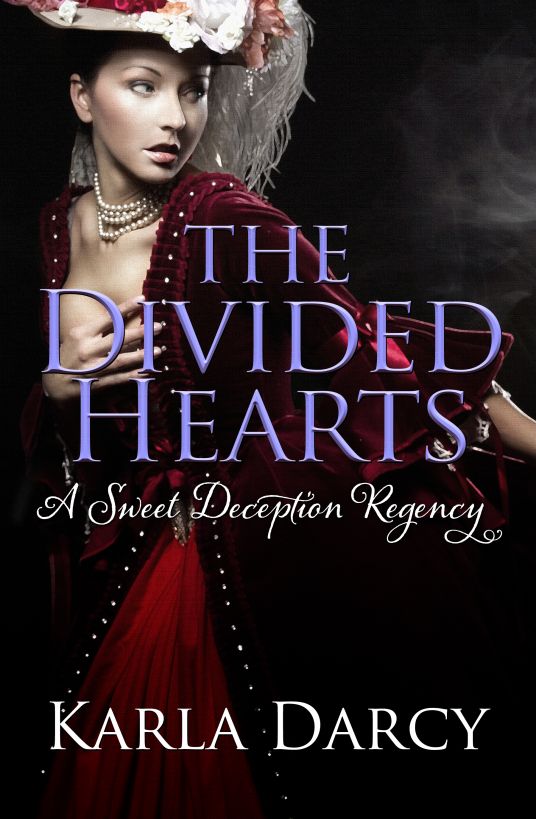 “Fans of Downton Abbey and Jane Austen
(without zombies) will adore this book. Karla Darcy makes us
remember why we lose sense and sensibility for a sexy Regency hero
and captures the era with a glorious and colorful voice!”

“Karla Darcy weaves one fabulous Regency
Romance after another. Wise, witty and wonderful. Move over Jane
for another Darcy you will love!”

“… creates a particularly attractive heroine
to captivate both the hero and the reader alike. Darcy is winning a
large readership with her diverting novels in this most competitive
genre.”

“The result is an amusing contest of matching
wits, that will leave you holding your sides as you root for a
happy compromise between the foes.”

“Karla hooks readers and carries them along
to a wonderfully satisfying ending.”

“Excellent. This one had me weeping
sentimentally near the end. [One of the best] Regency stories ever
published.”

“I simply couldn’t put the book down. This
emotionally intense love story will grip readers’ attention.”

“…writing is graceful and witty, plotting is
clever, added to this are two characters who will charm and delight
you.”

“The humor and tenderness give this book
heart and authentic details and great sexual tension make for a
great read.”

“Darcy is winning a large readership with her
diverting novels in this most competitive genre.”

“…. weaves her magic spell once more in this
intricately plotted gem of a book.”

The Divided Hearts
is a
work of fiction. Names, characters, places, and incidents either
are the product of the author’s imagination or are used
fictitiously, and any resemblance to actual persons, living or
dead, business establishments, events, or locales is entirely
coincidental.

This ebook is licensed for your personal
enjoyment only. This ebook may not be re-sold or given away to
other people. If you would like to share this book with another
person, please purchase an additional copy for each person you
share it with. If you’re reading this book and did not purchase it,
or it was not purchased for your use only, then please return it
and purchase your own copy. Thank you for respecting the hard work
of this author.

The publisher does not have any control over
and does not assume any responsibility for author or third-party
websites or their content.

No part of this book may be reproduced,
scanned, or distributed in any printed or electronic form without
express written permission from the publisher. The scanning,
uploading, and distribution of this book via the Internet or any
other means without the permission of the publisher is illegal and
punishable by law. Please do not participate in or encourage piracy
of copyrighted materials in violation of the author’s rights.
Purchase only authorized editions.

Other Books by Karla Darcy

You might be far in distance but you’re close
at hand always.

“You want me to spy on your grandson?” Lady
Judith Hallowell’s well-bred voice was tinged with astonishment as
she looked over the rim of the bone china teacup.

Judith shook her head in perplexity. Her
sun-streaked blonde curls quivered, catching and holding the
sunlight from the window. She leaned forward, setting her cup on
the carved Chinese table. Her long-fingered hands smoothed the
skirt of the black silk round gown and straightened the ribbons
that dangled below her rounded bosom. This simple motion had a
calming effect and she looked sharply across the table at Lady
Letitia Bellingham.

Under Judith’s baleful glance, the older
woman had the grace to look self-conscious but it was only a
momentary lapse. Pursing her mouth into a moue of disapproval,
Letty arched her chin in a gesture that would have done justice to
a queen. She raised her eyebrows in hauteur, staring with disdain
at the cheeky young girl. Catching the twinkle of mischief in
Judith’s golden-hazel eyes, the old lady snorted.

“I always warned your mother, my girl, that
you had the tongue of an adder. No wonder you’re not married,”
Letty snapped.

Judith’s light, tinkling laugh filled the
room, bringing a smile to the old woman’s lips. As always she was
well pleased with the chit, enjoying her frequent visits. Lord, but
she would miss the girl. “It’s no laughing matter, missy.”

“I’m sorry, Aunt Letty,” Judith said. “I
know you think I’m quite on the shelf. Twenty-five and still not
married. But believe me, my sharp tongue has had little effect
driving away suitors. It seems that any young woman with a sizeable
portion is fair game in the marriage mart.”

“No need to be cynical, Judith. Your face
and figure would assure you of a husband if you hadn’t a groat.”
Letty fussed with her lacy cap, ignoring the saucy grin of the
young woman. “Now back to my business. I am not asking you to spy
on my grandson. That behavior would be prodigious, um,
outré
.”

“But, Aunt Letty, you wish me to question
the man as to his principles and political ideals.” Judith leaned
forward, her lovely face set in a somber expression. “It would seem
to me that no matter how you tie it up in clean linen, the fact
remains that I would be spying on the poor fellow.”

“Fustian!” Letty muttered, giving the girl a
fulminating glance. “Let’s not deal in stupid crochets, Judith. I
would never involve you in anything if I felt you would be behaving
shabbily. I am in need of a little information.”

Judith sat back in her chair, observing the
frustrated expression on Lady Letitia’s wrinkled face. She loved
the old woman but wondered what cork-brained scheme she had in
mind.

“All right, darling auntie. Give over, as my
abigail so elegantly puts it.” Judith spoke gently to the old
woman, but her eyes were wary. “What startling piece of information
do you require?”

“A little respect, child. I am an old woman,
you know. It shan’t be long before I stick my spoon in the wall.”
Letty peeked at Judith to see what effect her words had had, but
was nonplused at the unholy grin on the young girl’s face. Ignoring
it, she continued, “I only wish to find out if Nathanael’s
sympathies lie with England or with America.”

“But, Aunt Letty, your family has always
been for England,” Judith said, surprised at the request.

“Quite so. But the lad was born in the
Colonies and, despite the fact that he was educated here in
England, it is possible that he no longer feels an allegiance to
this country. Granted his father was loyal to the end.” A cloud of
sadness entered the old woman’s eyes as she remembered the death of
her son. She shook her head, refusing to dwell on such a tragedy.
Mothers should not have to bear the death of a child, no matter
what the age. It was against the very nature of life, to survive
your own offspring.

Observing the weary droop of Letty’s
shoulders, Judith hurried to bring the conversation back to the
present. “But when Nathanael was at Cambridge, you must have had a
chance to assess his loyalties. He must have given some
indication.”

“I hesitated to ask,” Letty admitted. “I
know it was cowardly, but I was so afraid he would make a hasty
decision that both of us would regret. All I could do was show him
the kind of life he would lead if he were to return. As a titled
gentleman, the highest society would be his
milieu
. I tried
to surround him with fellows his own age with similar backgrounds
so that he would begin to understand what place he would occupy in
society. He was a well set up young man and appeared to enjoy
himself to the fullest.”

“Yet he returned to America?” Judith asked
with surprise.

“He was still young, my dear. His father was
ailing and he was needed at home. It was no time to force a
decision.”

“It’s been four years since your son’s
death. Perhaps now your grandson is ready to return. He must have
respected his father’s influence.”

“Not necessarily, my dear,” the old woman
said, eyeing the girl. “Look to your own family for divided
loyalties.”

“As always, auntie, you have the right of
it. With an American father and an English mother, I am not one to
preach family unity.” Judith sighed as she leaned against the
brocaded chair back. At the best of times it was difficult to view
her parents’ separation with equanimity, but since the death of her
mother, she had spent a great deal of time wondering how things
‘might’ have been. “Even after two months, Aunt Letty, I find it
hard to believe that Mama is gone. She was always so alive, so
vital.”

“When I remember her, which is often, my
love,” Letty said, her eyes moist as she gently touched the younger
woman’s hand, “I think of how Elizabeth looked at her come out
ball; dressed in white with touches of silver tissue, she sparkled
like a Christmas angel. Gallants surrounded her but she had eyes
for no one except your father. I wonder if your mother had any
presentiment that their marriage would end, divided by an
ocean.”

“Poor Mama,” Judith said. “Just before her
death she told me how much she regretted the separation from
father. But Mama truly hated America. I think she tried at first
but then she missed England so much she just had to return.”

“I loved your mother, but I was not blind to
her faults. Elizabeth was a delightful, charming miss. Born and
raised to take her place in London society. Can’t imagine where she
got up the gumption to elope with your father and then hare off to
that barbarian country.” Letty shook her white head in
bewilderment.

“She loved him,” Judith answered simply.
“After she returned I think she missed Simon, but realized that
apart from Father’s infrequent visits they had little hope of
living together in England. And of course, she would never return
to America.”

“They were a mismatched pair,” Letty
acknowledged. “In some ways, Judith, you’ve had the best of both
worlds. I’ll give your mother credit for not being poor-spirited in
her dealings with Simon. She never begrudged your father a moment
of your time when he visited London.”

“His letter after mother’s death was warm
with affection.” Judith’s eyes filled, recalling his words. She
would always treasure the letter that had told of his sorrow. The
pages were filled with remembrances, with no mention of regret and
loneliness, but it was there, between the lines. Judith blinked,
flashing a watery smile across to the plump little woman on the
couch. “Don’t fret, Aunt Letty. Father and I rub along well with
each other. I shall somehow survive my exile in that-what did you
call it-barbaric country.”

Simon’s invitation for Judith to visit him
in America had come as a surprise. At first she was so lonely for
her mother that she feared leaving her friends and the country that
was her home. After the greatest part of her grief had dissipated,
Judith realized that she needed something to occupy her mind. Then
too, her innate curiosity had drawn fanciful descriptions that
tantalized her. Although she was English in her education, social
experiences and lifestyle, she had been born in Newport, Rhode
Island. America was part of her heritage, and she ought to discover
what part, if any, that brash new country had played in her own
life. She felt no affinity for America, only a slight
inquisitiveness.

Neither Here Nor There by Bryson, Bill
The Pleasure of My Company by Steve Martin
Sins of the Flesh by Colleen McCullough
Finding Allie by Meli Raine
Little Doll by Melissa Jane
THE (tlpq-4) by Daniel Abraham
A Northern Thunder by Andy Harp
Writing Active Setting Book 1: Characterization and Sensory Detail by Buckham, Mary
With This Heart by R. S. Grey
The Van Alen Legacy by Melissa de La Cruz
Our partner