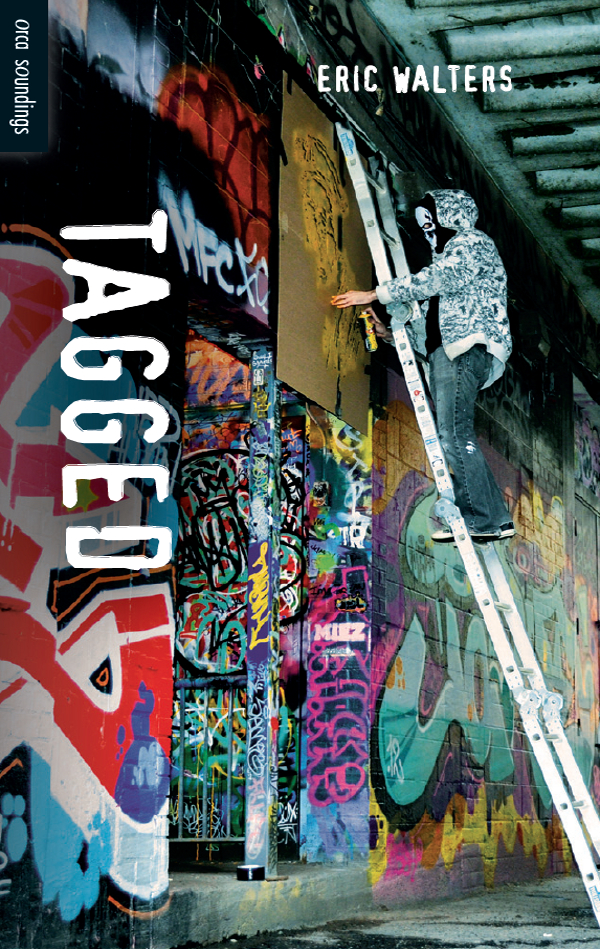 Summary:
A graffiti artistâthe Wizâtakes on the city and the mayor in a fight to save the heart of the community.

I'd like to thank Deadboyâ
a true artist, a deep thinker
and a real gentleman.

“Watch your head,” I said as I pulled the wire up to enlarge the hole in the fence.

Julia slipped through the opening.

“You always bring us to the loveliest places.”

“It will be lovely.”

“You've seen it, Ian?” Oswald asked as he followed behind us.

“No, but they're always good, so I don't know why this one wouldn't be.”

We slid down the concrete slope of the little waterway. At one point it had been a real river with mud banks and plants and fish, and it would have twisted and turned. Now it was as straight as an arrow, trapped between two concrete banks, with no life, more like a sewer than a stream.

“How do you even know there's something down here?” Julia asked.

She shook her head sadly. “I can't believe you spend so much time on there.”

“
I
can't believe that you haven't signed up.”

“As I said, it's a waste of time. I'm not seeing anything except nothing, so I stand by my comment,” she said.

“It's under the bridge.”

“That makes sense,” Oswald added. “That's out of the way, hidden from the road and prying eyes.”

I thought I was starting to see something. There was more and more andâ

There it was, a painted cliff with a flock of sheep at the top, two tumbling down, one at the bottom, half of it painted right to the waterline of the real river and the rest of it underwater and unseen. Two more sheep were floating downstream, just their legs showing. There was one sheep at the top with a word balloon saying,
Didn't anybody learn to swim?

“Well, what do you think now?” I asked Julia.

“It certainly is big.”

“I wasn't asking you to measure it but to appreciate it.”

“Ian, at this point all I can appreciate is that it's big,” she replied.

I turned to Oswald. “What's your opinion?”

“She's rightâit is big. But in my opinion, it's pretty good.”

“Pretty good? It's beautiful, amazing and incredible,” I said.

“This might be the best one. It is a real piece of art,” Oswald agreed.

“And what exactly do you know about art?” Julia challenged.

“You like lasagna, but that doesn't make it art.”

“First off, I love lasagna, and second off, there is an art to cooking. Edible art may be my favorite kind.”

“He's right,” I agreed. “Food can be art. There was this sculptor who only used raw meat.”

“My butcher does that,” Oswald said. “You should see the display case in his deli.”

“No, I'm serious. It was at some fancy museum in London. He made these sculptures out of meat, and then the meat rotted over the next month, and people watched the changing sculptures.”

“That is seriously disgusting!” Julia protested.

I laughed. “I imagine it didn't smell so good. Lots of people protested against it.”

“I would have protested that too,” Oswald added.

“You would have?” Julia asked.

“Sure, that was a waste of good food that could have been eaten.”

“Typical Oswald, thinking with your stomach.”

“Typical Julia, feeling with your head.”

It was rare now for the tension between them to rise to the surface like this, but it still did. Friends who had become boyfriend and girlfriend trying to become just friends againâit didn't necessarily work so well. I kept that in mind whenever I thought that maybe Julia and I could be more than friends. It wasn't worth the risk.

“Beauty and art are in the eye of the beholder,” I said, breaking the silence. “And according to this beholder, this was produced by an artist.”

“Do you think it's the same person doing all of these?” she asked.

“Maybe it is to you, the art
expert
, but not to us common folk,” Julia said.

I walked over and stood at the bottom right-hand corner of the creation. There was the big, stylized WIZ, written inside the outline of a sheep.

“So he thinks he's a wizard,” Julia said sarcastically.

“Not to me,” I said before Oswald could. It probably was a guy, but I still wanted to know why she thought so.

“It's simple. Males, whether they're dogs or humans, all want to mark their territory. One will raise up his back leg, and the other, the arm holding the can of spray paint.”

“So, let me get this straight. To you this is the human equivalent of a dog relieving itself on a post?” I questioned.

“More or lessâand it even explains his tag name. Basically, he's taking a
Wiz
on the wall.”

Oswald laughed. “Now
that
was creative. Here, take a picture of me with it.”

He handed me his phone and ran over to stand in the middle of the mural.

“Go over to the other side of the creek. Use the rocks to get over,” he commanded.

There was a series of rocks littering the little stream. If I jumped from one to the other, it looked like it might be possible to get across. Maybe. I hesitated.

“You can do it,” Oswald said. “But Ian, be careful. I wouldn't want you to fall inâat least, not while you're holding my phone. Hurry up.”

I was going to do it, but I wasn't going to hurry. I moved carefully, jumping from rock to rock until I reached the other cement bank.

“Say cheese,” I said as I aimed the camera.

He smiled and held out his hands, gesturing to the painting like he was a supermodel selling perfume.

“Now take one of me right down here by the tag. Use the zoom to get me and it.”

I fiddled around until I had him and the tag in the screen. “Nice zoom on the camera phone,” I said. “Got it again.”

“Thanks. This piece is fantastic, if I do say so myself.”

“You're acting like you're the one who painted it,” Julia scolded.

“Of course I didn't, but that doesn't mean I don't want to have my picture taken with it,” he protested. “Did you design or build the Eiffel Tower?”

“Then why is there a picture in your room of you and the tower?” he asked.

“When it was first put up, it was part of an advertisement for the World's Fair in Paris, and there were demands from Parisians that it be torn down because it was considered an eyesore,” Oswald said.

“Fine,” she said. “But it did go on to become an icon. I'll agree that this is art if millions of people come to see it and have their pictures taken with it over the next hundred years.”

“That won't happen. I doubt it will be here in a hundred hours.”

“Why, will it wash off in the next rain?”

“It's permanent paint, but only permanent until the City sends a crew to paint over it,” I explained.

“I heard the one with the dogs is gone already,” Oswald added.

“The doggies are gone?” Julia asked. She sounded genuinely disappointed.

“
That
one you thought was art?” I asked.

She shrugged. “I just like dogs. It was cute.”

“Always with the stomach,” she said.

“Aside from the quality of the art, I can't help wondering how he did this painting,” I said.

“Seems pretty straightforward to me,” Oswald said. “A ladder and a couple of long planks from one side of the creek to the other, that's all.” He paused. “Well, at least that's what I was thinkingâ¦I don't knowâ¦that might work, or maybe it wouldn't.”

“It's just strange when art involves a ladder,” said Julia.

“What makes you think he used a ladder?” she questioned.

“Everybody knows about that. He used a ladder and some scaffolding. How do you think he painted the ceiling of that church in Italy?”

“Churchâ¦wait, do you mean the Sistine Chapel at the Vatican?”

“No, I'm pretty sure it's Italy,” Oswald said. He turned slightly and winked at me. He was trying to get Julia going.

“The Vatican
is
in Italy, and it wasn't Rembrandt, it was Michelangelo!”

“Are you sure? I'm pretty sure that Angelo guy is a character in
Donkey Kong
. Isn't he Mario's brother?”

Redoubt by Mercedes Lackey
Six Feet Over It by Jennifer Longo
The Only Way by Jamie Sullivan
Dead and Buried by Anne Cassidy
The Grownup by Gillian Flynn
Destroyer by C. J. Cherryh
Birthday Girl: Paolo's Playhouse, Book 3 by Natasha Moore
Rebel Island by Rick Riordan
Saying Goodbye (What the World Doesn't Know) by Martel, Mahima
The Brood's Sweet Song (The Many-Legged Harem Book 1) by Trinity Dare
Our partner