Read TALES FROM THE SCRIPT: THE BEHIND-THE-CAMERA ADVENTURES OF A TV COMEDY WRITER Online

TALES FROM THE SCRIPT: THE BEHIND-THE-CAMERA ADVENTURES OF A TV COMEDY WRITER 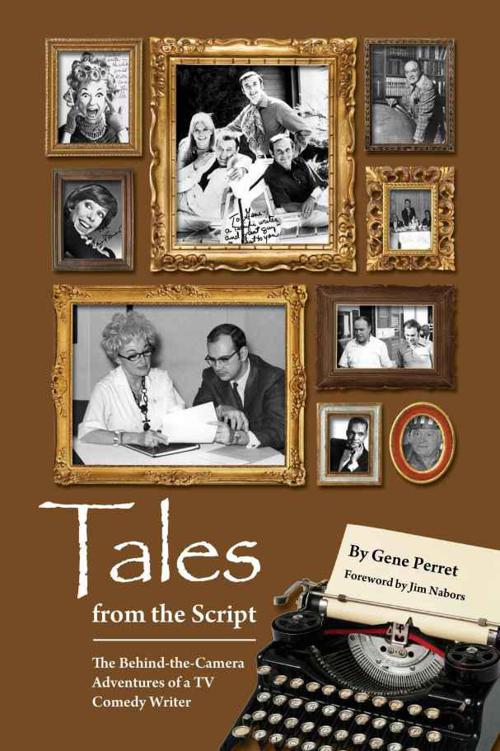 Tales from the Script
© 2010 Gene Perret All rights reserved.

Television seems to be an incredibly visible craft. The performers
step onto a brilliantly lighted stage with the cameras focused on them.
They sing, dance, act, tell jokes, and do it all not only for you, but right
in your home. The celebrities are there for you to see and enjoy each
week, sometimes even each night.

Yet the entertainment you see on your television screen is only the
proverbial tip of the iceberg. That’s the part of the production that is
in front of the camera. Behind the camera are countless talented, devoted, dedicated people supporting both the show and the performer.
There are set designers, who make the scenery colorful and attractive
to the eye. There are makeup people, who try their darndest to make
the celebrities look attractive to the eye. There are costume designers, lighting professionals, sound experts, electrical authorities, and
technical wizards, who know which cables to connect and which buttons to push to magically transfer that stage action to your home TV.
There are gifted musicians, choreographers, sound effects people, and
a veritable army of others that i’m forgetting.

One group of behind-the-camera workers that no performer can
dare to forget is the writers. These creative folks are the only ones
who are greeted when they show up for work by a completely blank

vii
viii
Tales
from the Script
page. Their challenging chore is to fill that page with sparkling, inventive entertainment.

Gene Perret, began his television writing career on the staff of my
variety show,
The Jim Nabors Hour.
He went on from there to work
as a writer, head-writer, and producer for various television shows for
the next three decades.

in this book,
Tales from the Script
, Gene paints a delightful picture
of that part of television which is not so visible. it’s the world of television, especially from the writing point of view, that happens out of
range of the camera’s lens.

normally, all of us view television head-on. We face the screen
and accept whatever the producers and directors of the various shows
offer us. Gene’s book is a more panoramic view of television production. it does include many of the on-screen shenanigans, but it also
turns the camera to focus on the action behind it.

This book gives a much fuller picture of television production and
entertainment.
it begins with the blank pages, tells how the scripts
Foreword
ix

were developed, rehearsed, and staged. it continues on through the
broadcast and even to the eventual rave reviews or pans from the critics.
This is an invitation to sit in on the writers meetings and to be in
the room as the jokes and sketches are being written. it’s a ViP pass
to stand on the stage, out of camera range, as the shows are rehearsed
and taped.

i’m personally going to enjoy reading it because i’m eager to find
out exactly what was going on around the studio while i was busy in
wardrobe fittings and makeup.

Enjoy it.
Jim nabors
July 13, 2009
Chapter One
The Moment of Conception

i was conceived in a public restroom. not me, the person—me, the
humorist. it happened in a restaurant in South Philadelphia when i
was around six or seven years old.

i was combing my hair when two young sailors came into the
men’s room. One of them noticed the prominent cowlick on the back
of my head. He touched it and said, “What’s this?”

Talking to his image in the mirror, i said, “Oh, that’s my personality.”
They both laughed, but they did not just laugh; they got hysterical. What i said didn’t seem that funny to me. Cute, i’ll admit, but
funny? They thought it was, though. it struck them just the right way
and they couldn’t stop laughing.
i liked that sound. Making people laugh like that thrilled me. A
surge of power rushed through my innards. i felt like a genius at that
moment, a comedy savant.
Deep inside my spirit, some comic spermatozoa penetrated an
egg of humor and a gag writer was conceived.

Some comedian once commented that a person goes into a life of
comedy the same way that a woman might go into a life of sin. First
they try it for the fun of it, then they start entertaining a few friends,
and then they say, “What the hell, i might as well make a buck at it.”

That’s the way it happened for me.
Comedy had always intrigued me, so for the fun of it, i turned it
into a hobby. During lunchtime chatter at work, i did little semi-rehearsed routines to get laughs from my colleagues. i cut pictures out
of magazines, put captions on them, and pasted them in books to pass
around to friends. i did cartoons about my family. i tried anything
that would get laughs.
i wasn’t the class clown. George Carlin gave the best explanation
for that. He said he didn’t have the courage to be the class clown, but
he told the class clown what to do. That’s the way i was—too shy to
get up and perform comedy, but i loved writing it for others . . . until
i went to work at General Electric’s Switchgear Plant in southwest
Philadelphia.
GE was hiring drafting apprentices—both mechanical and electrical, and i needed work. Since i was only eighteen-years old and
knew nothing about electricity i applied for the position of mechanical drafting apprentice. However, GE administered a whole series of
tests before hiring apprentices. My scores were high in all the exams
except one—the interest test.
That dumb test posed questions like: if you were near a piano,
would you

a)
play it?
b)
tune it?
c)
try to fix it?
i didn’t understand the rationale for most of the questions, so i simply wrote down whatever response occurred to me.

When the test results came in, the apprentice supervisor said, “You
got magnificent scores in all your tests. Your mechanical interest, though,
was rated a pitiable 10. Why don’t you apply for electrical drafting?”

Night in Eden by Candice Proctor
The Dog Stars by Peter Heller
Surrender the Dark by Donna Kauffman
Miranda's Mount by Phillipa Ashley
Scorpius by John Gardner
For the Love of Gracie by Amy K. Mcclung
Waking Kiss by Annabel Joseph
Halfway Between by Jana Leigh
A New World: Awakening by O'Brien, John
Fighting for the Dead by Nick Oldham
Our partner