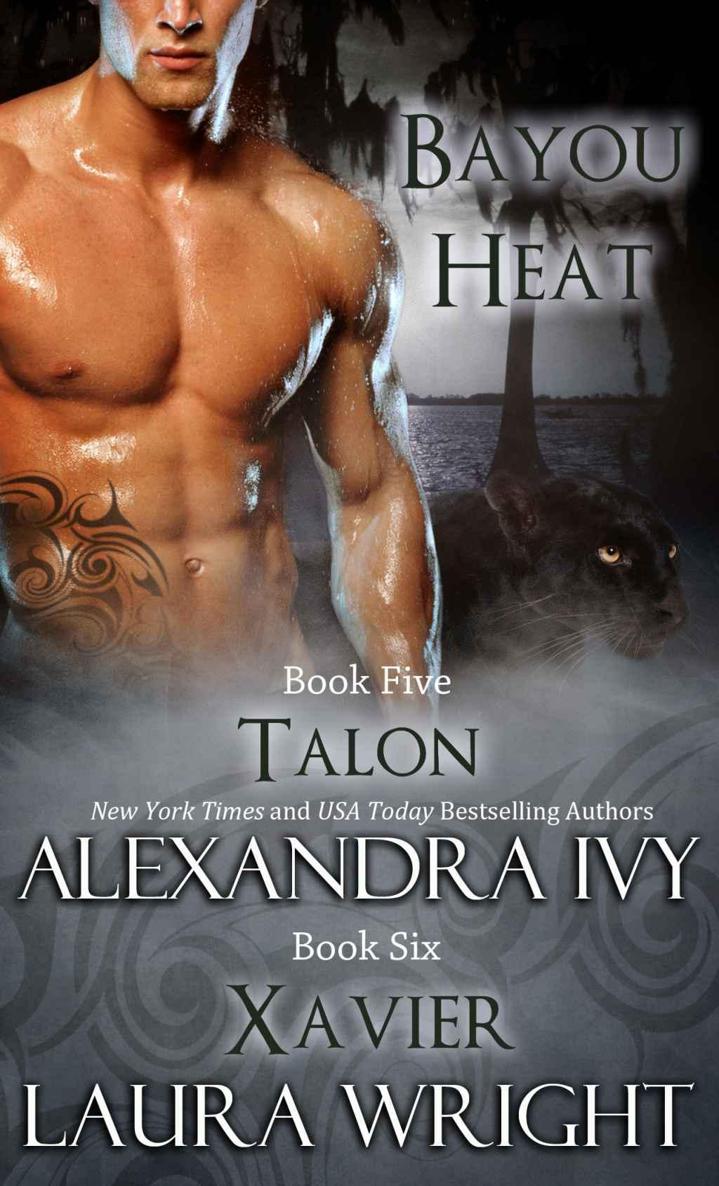 The house hidden in the tangled undergrowth just south of Bossier City was one stiff breeze away from total collapse.

Built from logs that had warped in the humid Louisiana weather, the cabin had a thin sheet of rusted tin and the windows were framed by rotting shutters. Even worse, the front porch had sagged at one end, giving it the appearance of a cheap funhouse.

Not the first place any man would select for his wife to give birth to his twin daughters.

But what choice did Chayton have?

With a muttered curse, he paced through the thick grass that left a damp film of dew on his knee-high moccasins. With the blood of the Chitimacha tribe flowing through his veins, Chayton felt most comfortable in soft leather pants and a vest that had been beaded by his mother. His glossy, dark hair was worn in a braid that fell to his waist, and his lean face was dominated by a prominent nose and eyes so dark they looked black. His bow was loosely held in one hand, with a quiver of arrows strapped to his back.

He was always on guard.

Ever since the vision had forced him to go on the run with his pregnant wife.

A familiar fear speared through his heart at the memory of that fateful day.

He’d been in the Wildlands at the request of the elders. He was one of the very few humans ever allowed in the remote sanctuary of the mystical Pantera. At first it had been his position as a shaman that had allowed him entry. Like his father before him, he’d had the ability to touch the spirit world.

It was a gift that gave him a much longer life span than most humans and the strange talent to detect the faction of an unborn Pantera baby. They called him when a female was close to delivering her cub to foresee whether it would be a Diplomat or Hunter or Healer. The Pantera began training their young from the cradle. Or at least they’d called him until the Pantera stopped having cubs.

That should have been the end of his connection to the Wildlands, but during one of his visits he’d stumbled across a talent that had only been a distant rumor among shamans until he’d manifested the gift.

He could do more than a catch a hint of the future of a Pantera.

He was an actual seer.

His predictions were often vague and sometimes impossible to interpret, but they were accurate enough that he was summoned to the Wildlands when the elders were debating a decision that would affect their people. Surrounded by the magic of the Wildlands, he would call upon the powers of his ancestors to be blessed with a glimpse of the future that could help lead the Pantera in the right direction.

It was a power he used only when the need was great.

Opening pathways to the ancestors was not only dangerous to him, but could occasionally allow malevolent spirits to escape into the world of men.

A damned shame he hadn’t said no when the elders had called for him again six months ago. But then he’d never seen a vision that was so clear. And certainly never one so intimately connected to himself.

His dark thoughts were thankfully cut short as the midwife stepped onto the porch. A small, dried up prune of a woman, she was known by the locals as JuJu.

“It’s done,” she said in clipped tones, wiping her hands on a bloody apron wrapped around her thin body.

She had the bedside manner of a rattlesnake.

“Both are healthy.” The woman stuck out a hand gnarled by age. “You have my money?”

Chayton reached beneath his vest to pull out the precious money that he’d earned by selling the pelts of animals he hunted. He didn’t dare take a job that would force him to fill out paperwork.

Paperwork could be traced.

He held up the money. “Your word that you won’t speak of this birth,” he growled, his eyes hard with warning. “Not to anyone.”

A cunning expression touched her dark, leathered face. “It will cost you.”

“Fine.” Chayton added another fifty he couldn’t afford. “Your word.”

“You have it.” JuJu snatched the money and poked it into the pocket of her apron. “Do you want to see your children?”

Chayton took a step forward only to come to a horrified halt when he heard a female voice speak from the nearby trees.

“We all wish to see the children.”

In one fluid motion he had an arrow in his bow and pointed toward the strange mist that flowed forward.

“Stay back,” he snarled, his gut twisting with dread as the mist lightened to reveal three females who moved forward with grim intent.

He’d only seen them in their puma forms, but away from the Wildlands the females were forced to take human shape. Still, it was almost impossible to make out anything of their features as they deliberately used their powers to manipulate his mind. Once they left, no one would be able to describe more than slender, female figures and a choking power that made it difficult to breathe.

Fighting through his clouded thoughts, Chayton prepared to attack. The bitches would die before harming his babies.

Preparing to take his shot, Chayton was caught off guard as he was hit from behind. Knocked to the ground by two large men, he felt the bow knocked from his hand. Then, once his arms were painfully pinned behind his back, he was jerked upright.

A glance to the side revealed his worst fear.

Two dark-haired men with eyes that glowed gold in the fading light.

The elders waited until they were certain he was under the control of the Hunters before turning toward the stunned midwife.

“Take us to the children,” they commanded in unison.

“Yes.” Clearly under the influence of the elders, the midwife turned to walk back into the shack, her eyes unfocused.

The mist shimmered as the elders followed JuJu, making a gesture toward the silent Hunters.

With a rough shove, Chayton was forced up the stairs and across the porch. A few more shoves and he was through the barren front room and into the back bedroom.

His breath was ripped from his lungs as he caught sight of his wife lying in the middle of the bed, a threadbare quilt covering her trembling body, and her pale hair damp with sweat. In her arms she clutched two tiny bundles wrapped in the blankets that Chayton had received from his mother as a birthing gift.

Her thin face turned in his direction. The past months hadn’t been kind to Dixie. She’d thought marriage to him would mean a fine house and a position of honor in the small town of La Pierre. Instead she’d been forced to endure a difficult pregnancy living off the land like his ancestors.

Her eyes widened with confusion. “Chayton? What’s going on?”

“Which child was born first?” the elders demanded.

The midwife reached to pluck one of the babes from Dixie’s arms, pulling down the blanket to reveal the small birthmark on the child’s collarbone.

Shock rippled through the room as all eyes locked on the dark mark that marred the milky white skin. Even Chayton felt a twinge of unease.

No. It was just a birthmark. It was human nature to try and see a shape in what was nothing more than a blot.

Using his captors’ distraction to his advantage, Chayton jerked free of their hold and lunged to take the baby from JuJu’s arms.

Dixie reached to grab the hem of his vest. “What are they doing?”

There was a low hiss from the elders. “The child is fated to destroy our homeland,” they said.

“What?” Dixie’s voice was shrill with fear. “She’s just a baby.”

Chayton clutched the baby to his heart. It was the first time he’d been allowed to cradle the sweet weight in his arms, but he’d loved his daughters from the moment he’d sensed that Dixie had conceived.

There was nothing he wouldn’t sacrifice to protect them.

Including the future of the Pantera.

“We don’t know that’s what the vision meant,” he rasped.

“What else can it mean?” the elders demanded, quoting back the words that had fallen from his own lips. “The blood of the Shaman’s firstborn shall carry the taint of Shakpi, releasing her powers upon the lands of the Pantera.”

He shook his head, stepping back. “You called me because your magic is already faltering. How can a newborn child be responsible for that?”

“Who is to say?” He had an impression of seething frustration just below the surface, although the elders continued to block his efforts to see beyond their magic. He was more immune than most humans to the mystic powers, so the fact they were able to keep him from seeing into their faces was annoying the hell out of him. Or maybe it was just a reaction to the fact they wanted to kill his daughter. “Perhaps we have failed in our duties,” the elders continued. “Or perhaps time has weakened the bonds of Shakpi’s prison.”

“You would sacrifice the life of a babe on vague words that could mean anything?” He edged backward, sensing the door was only a few feet behind him. “Or nothing?”

“We must protect the Wildlands.”

“A little late for your concern now, isn’t it?” he charged.

There was a ripple of shock among the Pantera. “What do you mean?” they demanded.

Chayton lifted his chin. He’d had time to think over the past six months. He now realized that the elders had known all along how dangerous it was for him to open a direct doorway to the world of the dead. Which was no doubt why they left the task to the rare humans capable of manipulating the magic instead of trying to find a Pantera to perform the dangerous ceremony.

Bedding the Babysitter by Sam Crescent
Coercion (The Cassano Series Book 3) by Scarlet Wolfe
Uncle John's Bathroom Reader Attack of the Factoids by Bathroom Readers' Institute
Three and a Half Weeks by Lulu Astor
All He Needs (All or Nothing) by Gibbs, C.C.
Ghost Lover by Colleen Little
Bruises of the Heart by J. J. Nite
Circle of Death by Keri Arthur
The Lorax by Dr. Seuss
The First Life of Vikram Roy (Many Lives Series Book 3) by Laxmi Hariharan
Our partner