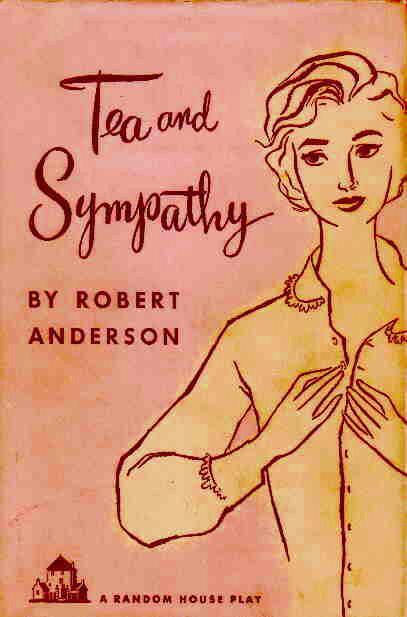 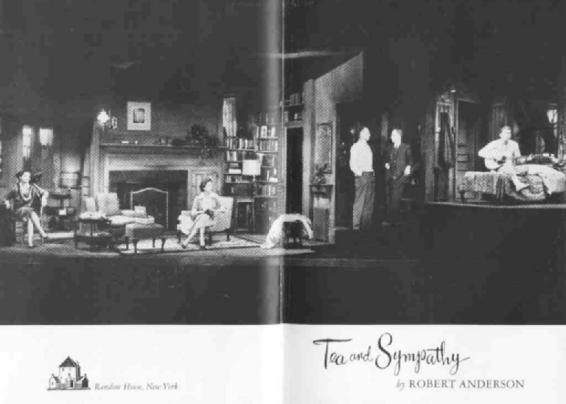 A dormitory in a boys' school in New England.

Late afternoon of a day early in June.

The scene is a small old Colonial house which is now being used as a
dormitory in a boys' school in New England.

The housemaster's study is a warm and friendly room, rather on the
dark side, but when the lamps are lighted, there are cheerful pools of
light. There is a fireplace in the back wall, bookcases, and upstage
right double doors leading to another part of the house. Since there is
no common room for the eight boys in this house, there is considerable
leniency in letting the boys use the study whenever the door is left ajar.

The boy's bedroom is small, containing a bed, a chair and a bureau.
It was meant to be Spartan, but the present occupant has given it a few
touches to make it a little more homelike: an Indian print on the bed,
India print curtains for the dormer window. There is a phonograph on
the ledge of the window. The door to the room is presumed to lead to the
sitting room which the roommates share. There is a door from the sitting
room which leads to the stair landing. Thus, to get to the bedroom from
the stairs, a person must go through the sitting room.

As the curtain rises, it is late afternoon of a day early in June.
No lamps have been lighted yet so the study is in a sort of twilight.

Upstairs in his room, TOM LEE is sitting on his bed playing the guitar
and singing softly and casually, the plaintive song, "The Joys of Love"
. . . TOM is going on eighteen.

He is young and a little gangling, but intense. He is wearing faded
khaki trousers, a white shirt open at the neck and white tennis sneakers.

Seated in the study listening to the singing are LAURA REYNOLDS and
LILLY SEARS. LAURA is a lovely, sensitive woman in her mid to late
twenties. Her essence is gentleness. She is compassionate and tender.
She is wearing a cashmere sweater and a wool skirt. As she listens to
TOM'S singing, she is sewing on what is obviously a period costume.

LILLY is in her late thirties, and in contrast to the simple effectiveness
of LAURA'S clothes, she is dressed a little too flashily for her
surroundings. . . . It would be in good taste on East 57th Street, but
not in a small New England town. . . . A smart suit and hat and a fur
piece. As she listens to TOM singing, she plays with the martini glass
in her hand.

(When he has finished, he strums on over the same
melody very casually, and hums to it intermittently.)

LILLY
(While TOM is singing)

Doesn't he have an afternoon class?

No. He's the only one in the house that doesn't.

LILLY
(When TOM has finished the song)

Do you know what he's thinking of?

LAURA
(Bites off a thread and looks up)

What do you mean?

What all the boys in this school are thinking about. Not
only now in the spring, but all the time . . . Sex!

(She wags her head a little wisely, and smiles.)

Four hundred boys from the ages of thirteen to nineteen.
That's the age, Laura.
(Restless, getting up)
Doesn't it give
you the willies sometimes, having all these boys around?

Of course not. I never think of it that way.

Harry tells me they put saltpeter in their food to quiet them down.
But the way they look at you, I can't believe it.

At any woman worth looking at. When I first came here ten years ago,
I didn't think I could stand it. Now I love it. I love watching them
look and suffer.

This is your first spring here, Laura. You wait.

The authorities say the ages from thirteen to nineteen . . .

You sound as though you were in the grave. How old are you?

They come here ignorant as all get out about women, and then spend
the next four years exchanging misinformation. They're so cute, and so
damned intense.

Most of them seem very casual to me.

That's just an air they put on. This is the age Romeo should be played.
You'd believe him! So intense! These kids would die for love, or almost
anything else. Harry says all their themes end in death.

But rather touching too, don't you think?

You won't tell your husband the way I was talking?

Though I don't know why I should care. All the boys talk about me. They
have me in and out of bed with every single master in the school --
and some married ones, too.

Cave Under the City by Mazer, Harry;
Everybody Was So Young by Amanda Vaill
Miss Antiqua's Adventure by Fran Baker
Where the Sun Hides (Seasons of Betrayal #1) by Bethany-Kris, London Miller
If Only (The Willowbrook Series Book 1) by Ashlyn Mathews
Sacrifice (Revelations Book 1) by Mia Bishop
Runner (The Runners, Book One) by Logan Rutherford
When In Rome...Find Yourself: A Sweet New Adult Romance by Lena Mae Hill
Papá Goriot by Honoré de Balzac
The Perfect Family by Kathryn Shay
Our partner