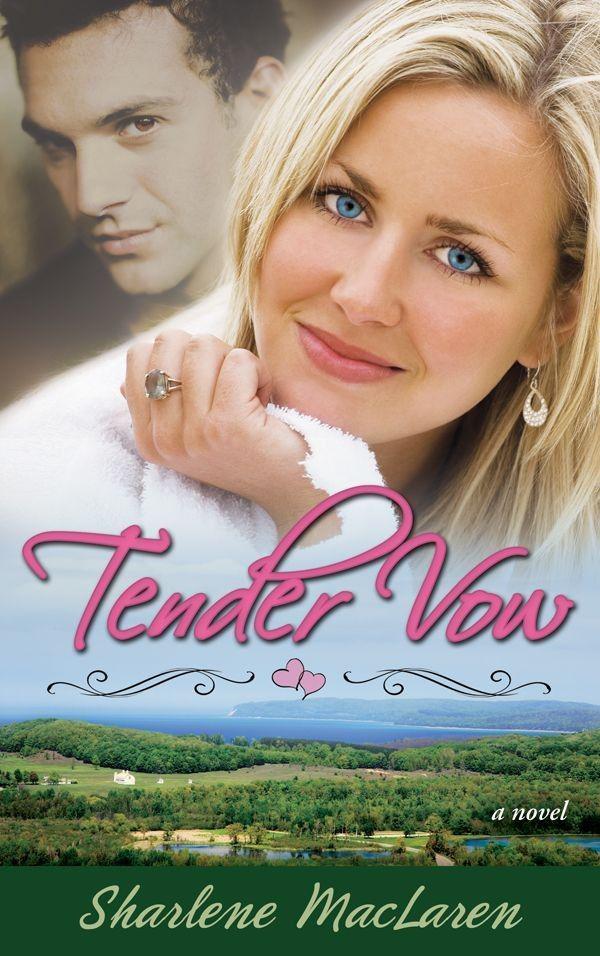 What Others Are Saying about Sharlene MacLaren and Tender Vow

Sharlene MacLaren delivers yet another heart-tugging story in Tender Vow. As Jason and Rachel cope with grief and loss, their faith is tested, even as they grow more and more dependent on each other. Every aspect of this richly woven tale—from the picturesque vistas of the tourist haven to the deeply emotional, elemental scenes—will draw readers in and not let them go until they add Tender Vow to their “keepers” list!

Yet again, Sharlene MacLaren pens a story that digs deep into the heart, revealing the healing powers of love, faith, and grace. This is a book you won’t want to put down, by an author you can trust to deliver insight, along with a few fluttering hearts.

Tender Vow takes readers into a skillfully written and inspiring novel that shows God’s gentle hand as He guides the characters toward healing—and love. Once again, Sharlene MacLaren captivates her readers with a book that satisfies the heart. This is a book you’ll have a lot of problems putting down!

Be prepared for a heartwarming journey into healing and forgiveness that guarantees to touch your life. Sharlene’s books always deliver an entertaining message. Tender Vow will reach straight to your core.

I am totally captivated! Sharlene’s characters are so lifelike. As they converse, I feel like I am in the same room with them. Her books have also challenged me to be more compassionate to those around me. There is only one drawback—whenever I complete one of her novels, I end up missing the characters I’ve grown to know and enjoy! You won’t be disappointed with Tender Vow, and you’ll probably find, like I did, that you can hardly wait for Sharlene’s next release. I just wish she’d write faster!

Publisher’s Note:
This novel is a work of fiction. References to real events, organizations, or places are used in a fictional context. Any resemblances to actual persons, living or dead, are entirely coincidental.

Unless otherwise indicated, all Scripture quotations are taken from the New King James Version, © 1979, 1980, 1982, 1984 by Thomas Nelson, Inc. Used by permission. All rights reserved. Scripture quotations marked (niv) are from the Holy Bible, New International Version®, niv®, © 1973, 1978, 1984 by the International Bible Society. Used by permission of Zondervan. All rights reserved.

Summary: “Grieving the tragic death of her husband, John, and struggling with the pressures of single parenting, Rachel Evans looks to God for the strength to accept help from others, like her brother-in-law, Jason—especially when their long-ago love is rekindled”—Provided by publisher.

No part of this book may be reproduced or transmitted in any form or by any means, electronic or mechanical—including photocopying, recording, or by any information storage and retrieval system—without permission in writing from the publisher. Please direct your inquiries to [email protected]

To my precious, longtime Bible study girlfriends (in no particular order): Becky, Leesa, Sandy, Terri, Margie, and Jan, who always lift me up to the Father in amazing ways, especially when those deadlines loom. I cherish and love you more than you will ever know!

PS: Your food always tastes so much better than mine!

Icy breezes whistled through the trees in Fairmount Cemetery, prompting the faithfuls gathered there to pull their collars tighter and button their coat fronts higher, as the tent that had been set up for the occasion did little to protect them from the elements. Just two days ago, northern Michigan had experienced a warm front, unusual for late November, but today’s temperatures made a mockery of it. Twenty-nine-year-old Jason Evans shivered, no longer feeling his fingers or toes, and wondered if the numbness came from the dreadful cold or from his deliberate displacement of emotion. He still couldn’t believe it—it was only five days after Thanksgiving, and his brother, John, just two years older than he, was gone.
Gone
.

As Pastor Eddie Turnwall from Harvest Community Church pronounced the final words of interment, sobs and whimpers welled up from the mourners. His mom’s guttural cry among them gouged him straight to the core. Jason’s dad pulled his wife closer while Jason placed a steadying hand on her shoulder. His girlfriend, Candace Peterson, stuck close by, her hand looped through his other arm. His sister-in-law—John’s widow, Rachel—stood about six feet away, clinging tightly to her father and borrowing his strength as tears froze on her cheeks. Her coat bulged because of her pregnancy of eight months, and Jason worried that the added stress of her grief might send her into early labor. Meagan, John and Rachel’s three-year-old daughter, was the only one oblivious to the goings-on; she twirled like a ballerina until Rachel’s fifteen-year-old sister, Tanna, bent down to pick her up.
If she knew the significance of this day
, Jason thought,
she’d be standing as still as a statue
. What a blessing God kept her shielded—at least, for the time being.

“No!” Rachel’s pitiful wail brought the reverend to a temporary halt. In the worst way, Jason wanted to go to her, but he had his mom to think about. Mitch Roberts supported his daughter, whispered something in her ear, and nodded for the reverend to continue. Pastor Turnwall hastened to a finish, but the last of his words faded in the howling winds.

At the close of the brief ceremony, many of the mourners stepped forward to give the family some final encouragement. Jason went through the motions, nodding and uttering words of thanks. While he longed to linger at the bronze casket, the weather made it impossible, so, as the last of the small crowd left the tent, he followed, Candace’s quiet sniveling somehow disarming him. He didn’t have the strength to comfort her, especially since she’d barely known his brother; she barely knew his family, for that matter.

“Are you all right?” Candace asked in a quavery voice.

“I’m doing okay,” he muttered, his gaze pointed downward as they walked along the frozen path. How could a person explain how he really felt on a day like this?

In front of them, mourners scattered in various directions, heading for cars covered by a thin layer of freshly fallen snow. Despite the cold, Rachel walked with slow, faltering steps, sagging against her father. Even from ten or so feet back, Jason could hear her mournful cries. The sound made his chest contract.

Without forethought, he left Candace to her own defenses and raced ahead to catch up with them.

“Rachel.” Breathless, he reached her side. “I’m so sorry.”

“Jay.” She turned from her father’s supportive grip and fell into Jason’s arms, her sobs competing with the sighing winds.

They stopped in the path, and he held her sorrow-racked body, feeling his eyes well up with tears. Through his blurred vision, he noted both families halting their steps to look on. One of Rachel’s girlfriends took Meagan from Tanna and headed toward one of the cars. “Shh. You can do this, Rachel,” he whispered. “Think of Meagan—and your baby.”

“I—I c-can’t,” she stammered, her voice barely resembling the confident tone of the Rachel he’d known as a kid, when he and John would argue over who was going to win her in the end. Of course, it’d been John, and rightfully so. And not for a second had Jason ever begrudged him. They fit like a glove, Rachel and John.

“Sure, you can,” he murmured in her ear. “You are Rachel Evans, strong, courageous, capable—and carrying my brother’s son, don’t forget.” He set her back from him and studied her perfect, oval face, framed by wisps of blonde hair falling out from beneath her brown velvet Chicago cuff hat. Her blue eyes, red around the edges, peered up at him from puffy eyelids without really seeing. Chills skipped up his spine, and he didn’t think they came from the air’s cold bite. “Come on, let’s get you to the car,” he urged her, thankful when Candace stepped forward to take Rachel’s other arm and they set off together. Rachel barely acknowledged Candace, and he wondered if she even remembered her, so few were the times he had brought her home.

“I can’t believe it, Jason. I just—I can’t believe it,” Rachel kept murmuring. “Just last week, we were making plans for our future, talking about John Jr. coming into the world, wondering how Meagan would feel about having a baby brother….”

“He just finished painting the nursery, you know.”

She frowned. “Tell me again what happened.”

His throat knotted. “What? No, Rach, not here.”

She slowed her steps to snag him by the coat sleeve. “I need to hear it again,” she said, punctuating each word with determination.

“We’ll talk later, but first, we need to get you out of the cold.”

“Jason’s right, honey,” Mitch said, coming up behind them. “Let’s go back to the house.”

“But I don’t understand how it happened. I need to understand.”

“We’ve been over it,” Arlene Roberts said as she joined them. Tanna came up beside her mother and held her hand as they walked. Like everyone else’s, Mrs. Roberts’s face bore evidence of having shed a river of tears.

“I don’t care!” Rachel’s voice conveyed traces of hysteria. She stopped in her tracks, forcing everyone else to do the same. “John was a good skier,” she said. “He knew the slopes on Sanders Peak like the back of his hand. You said yourself you guys used to ski out there every spring.” Her seascape-colored eyes shot holes of anguish straight through Jason—critical, faultfinding eyes.

A rancid taste collected at the back of his throat. “We did, Rach, and he was the best of the best, but it takes a champion skier to navigate Devil’s Run. Come on, your car’s just ahead.”

Her feet remained anchored to the frozen ground. “Did you force him, Jason?”

“What?” The single word hissed through his teeth. “How could you even suggest such a thing?”

“Rachel, now is not the time for such—”

But Rachel covered her dad’s words with her own. “Did you provoke him into taking Devil’s Run? Witnesses heard you two arguing, Jay. Why would you be fighting on top of a mountain?”

A Very Dirty Wedding by Sabrina Paige
A Question of Honor by Charles Todd
Awaken to Pleasure by Lauren Hawkeye
Dead Days: The Complete Season Two Collection by Ryan Casey
Seven Point Eight by Marie A. Harbon
MURDER on the ROCKS (Allie Griffin Mysteries Book 2) by Leslie Leigh
The Lords of Valdeon by C. R. Richards
Love on the Boardwalk by Christi Barth
Malcolm and Juliet by Bernard Beckett
Love Me for Me by Jenny Hale
Our partner