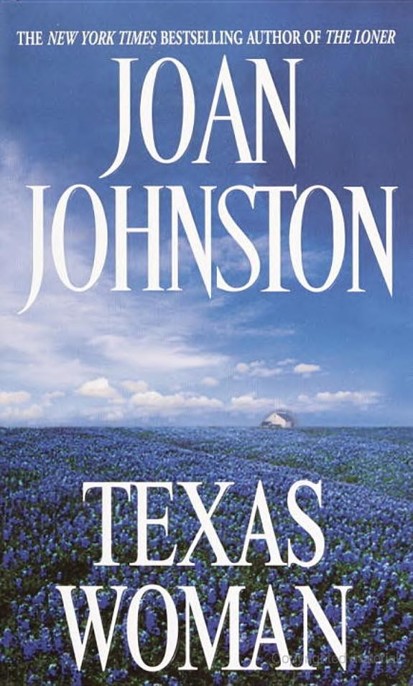 For my sister
Joyce Evelyn Mertens

I
N HIS DREAMS,
R
IP
S
TEWART ENVISIONED
three sons sweating shoulder to shoulder with him as his cotton plantation along the Brazos River blossomed in concert with the new Texas frontier. He had his sons’ names already picked out before he ever married Amelia, chosen as his bride because she was the only daughter in a nearby Scots family of seven healthy children.

Unfortunately, Amelia gave Rip three daughters. That did not deter Rip Stewart. He named the eldest Sloan, the second Bayleigh, and the youngest Creighton. Then he set out to make his dreams come true.

“I
SEE YOU
’
VE TAKEN YOUR BROTHER
’
S WHORE
for your woman, Don Cruz. Is she as hot-blooded as Antonio boasted she was?”

“Keep your tongue to yourself or I’ll cut it out, Alejandro.”

Sloan Stewart blanched at the malicious words that had been spoken by the grizzle-faced Mexican bandido bound hand and foot in the stinking San Antonio jail cell, and the equally savage retort from the tall, lean Castilian Spaniard who stood rigidly at her side. Humiliation drew the skin tight over her cheekbones as she restrained the bitter denial that sought voice. Yet what could she say in her defense?

She could not deny that she had been Antonio Guerrero’s lover. In fact, she had borne Tonio’s bastard son. Nor could she deny that Tonio’s elder brother Cruz desired her, and had sought—without success so far—to possess her. But it was a hideous thing to hear her relationship with the two brothers put in such contemptible terms.

She laid a hand on Cruz’s arm and felt the corded muscles of a feral animal tighten and form beneath the layers of fashionable cloth.

A narrow strip of sunlight flashed off the wide silver-and-turquoise bracelet Alejandro wore on his right wrist, drawing Sloan’s attention once more to the man before them. “Are you sure this bandido is the same man who murdered Tonio four years ago?” she asked Cruz.

“Antonio Guerrero was a traitor and a fool!” Alejandro snarled. “If I had not shot him, the Texas Rangers would have hung him for plotting with the Mexican government to overthrow the Republic.”

“You are going to hang, Alejandro. If not for murdering my brother, then for stealing my cattle and my horses and for raping the women of my pueblo,” Cruz said.

The bandido’s hostile eyes glittered in the darkened cell. “I admit to nothing—except that I enjoy the first tearing thrust into virgin flesh.” He eyed Sloan and added, “You are not, it seems, nearly so fastidious, Don Cruz.”

Sloan unconsciously backed away from the bandido’s malevolent stare until she felt Cruz’s implacable strength behind her. She straightened her shoulders and said with outward calm, “I’m ready to leave. I’ve seen all I need to see.”

Alejandro nodded his head in mock obeisance to her. “
Adiós, puta
. Until we meet again.”

Sloan recoiled from the cruel smile on Alejandro’s sharp-boned face. His pitiless eyes undressed her, exposing the full breasts with dusky nipples he would pinch and fondle, the slender waist and wide, child-bearing hips he would mount, the triangle of dark curls at the juncture of slim, strong legs that would grip his hairy thighs.

She closed her eyes to shut out his visual rape of her, but the sound of Alejandro’s low, grating laugh forced them open again. She shivered as his eyes insolently skimmed her body one last time.

“I will not be here long enough to hang,” he promised. “I will escape, as I escaped from the Rangers four years ago. And when I do, I will see for myself whether Antonio spoke the truth about his whore.”

Sloan didn’t wait to hear Cruz’s response to the bandido’s taunt. She left the dank room of tiny cells filled with frontier riffraff, murderers and thieves and walked outside onto San Antonio’s dusty central square. She squinted her eyes against the sun’s midday glare and leaned her hand against the rough brown adobe building, fighting the dizziness that overtook her.

She inhaled a deep breath of air to clear her nostrils of the stench of the jail. The smells outside were equally pungent, but not so offensive—
frijoles
cooking, a freshly laid pattern of horse dung, tiny wild roses climbing the adobe jail wall, and overlaying it all, the tangy smell of sweat from humans and horses.

Sloan froze as a rigid-backed Spanish woman passed by, tugging along a dark-haired little boy dressed in short pants. For an instant Sloan thought it was Cruz’s mother Doña Lucia with Cisco—Sloan’s now three-year-old son.

Sloan slumped back against the adobe wall, fearful her legs wouldn’t support her, as memories of Tonio, of her pregnancy, and of the birth of her son came flooding back.

It was hard to remember why she had first been attracted to Antonio Guerrero, but she supposed it must have been his smile. It was charming and rakish and tilted up at one corner more than the other. Or it might have been his dark eyes sparkling with devilry that had captured her heart. But it was his voice to which she had succumbed, a voice that was low and smooth and coaxing in a way she hadn’t been able to resist.

She had felt foolish when she realized she had fallen in love with Tonio. As the future heir to Three Oaks, she had been trained by Rip Stewart to make calm, rational decisions, and there was nothing the least bit calm or rational about falling head over heels in love. Especially when she had been raised from birth to understand that her destiny lay with Three Oaks—not as the wife of the younger son of a Spanish don.

She didn’t dare admit her feelings to her father, for fear he’d think her clabber-headed. So she had kept her thoughts to herself. And made some terrible mistakes.

Sloan picked at a callus on the palm of her hand. Tonio hadn’t liked her hands, she remembered. She held them out in front of her and looked at them. Raising cotton was dirty work. Her fingernails were broken to the quick, and not a little grimy. Calluses adorned her fingertips and the palms of her hands. They were small hands, but there was nothing dainty about them, she thought with a grimace.

Yet she had full breasts and hips, a shape a man might admire if he could ever see beyond the planter’s clothes she usually wore. Sloan glanced at her dusty Wellington boots, at her stained osnaburg trousers, at the visible ring of sweat at her armpits on the gingham shirt she wore, at the unraveling threads on the second button of her waistcoat, which had been nearly yanked off when it got caught on the cotton gin. Her lips curved in a rueful, self-deprecating grin. Right now she looked a mess!

She hadn’t been near a mirror this morning, but she could imagine her face also showed signs of her hurried journey from Three Oaks to San Antonio. Her one vanity, her waist-length sable-brown hair, was tied at her nape in a single tail with a piece of crumpled ribbon that had once been pale yellow.

There was nothing about her normal working-day appearance to entice a man as handsome as Antonio Guerrero to fall in love with her. She should have realized from the beginning that he’d had other reasons for what he had said and done.

Sloan felt her stomach roil with the disgust she felt every time she thought of how the man she had loved had so coldly and calculatedly used that love to get from her what he had wanted.

She would have done anything for him. He had used her to further his sordid plot with the Mexican government to invade Texas, giving her secret messages to carry to his cohorts. She had done his bidding without questioning him, because she had loved and trusted him. How gullible she had been! How stupid!

It was hard to remember the initial joy she had felt at finding out she was pregnant with Tonio’s child. Hard to remember the hours when she had pressed her hands against her belly and thought with wonder of their child growing within her. She should have realized something was wrong when Tonio did not immediately offer to marry her when she told him she was pregnant.

“We must wait,
chiquita
,” he had said. “There will be time enough to marry and give the child a name.”

Of course, he had never intended to marry her. It had been devastating to discover he was a traitor, that he had been murdered by one of his own men, Alejandro Sanchez, and that she must somehow bear all on her own the sorrow of his death, the shock of his betrayal and the shame of being pregnant and unwed.

It had not taken long for sorrow and shock and shame to become hate and anger and resolution. She had thought it out, weighing every detail, and made the only rational decision possible: She would not keep Tonio’s child.

She was bitter and angry for what Tonio had done. She did not think she could love the child of such a man, or even maintain indifference to it. She was afraid she would blame the child for the sins of the father, and she feared the hateful emotions she felt whenever she thought of Tonio and the bastard child she was to bear him.

To spare the innocent child, she had sought out Tonio’s elder brother, Cruz, and they had come to an agreement.

Sloan sighed and shook her head. She still could not believe she had acted as she had. She could only blame her actions on the turbulent emotions she had felt at the time. She could vividly recall the disbelieving look on Cruz’s face when she told him what she wanted to do.

“You will give away your own child?” he had exclaimed in horror.

“It would bring back too many memories to keep Tonio’s baby,” she had replied.

“Surely in time the memories will fade,” he had said, “and you will want your son or daughter—”

“I will never forget Tonio. Or what he—”

“You loved him, then,” Cruz had said, his voice harsh.

“I did,” she admitted. “More than my life,” she finished in a whisper. That was what had made his betrayal so painful. It did not occur to her that Cruz would not realize her love for his brother had died with Tonio.

She had watched Cruz’s lips flatten to a thin line, watched him frown as he came to his decision.

In Defense of Flogging by Peter Moskos
Tipping the Velvet by Sarah Waters
RideofHerLife by Anne Rainey
The Lies of Fair Ladies by Jonathan Gash
Five Days in Paris by Danielle Steel
Blistered Kind Of Love by Angela Ballard, Duffy Ballard
Dingo Firestorm by Ian Pringle
Ghost Hero by S. J. Rozan
Spellbound (Spellbringers Book 1) by Tricia Drammeh
The City Beneath by Melody Johnson
Our partner