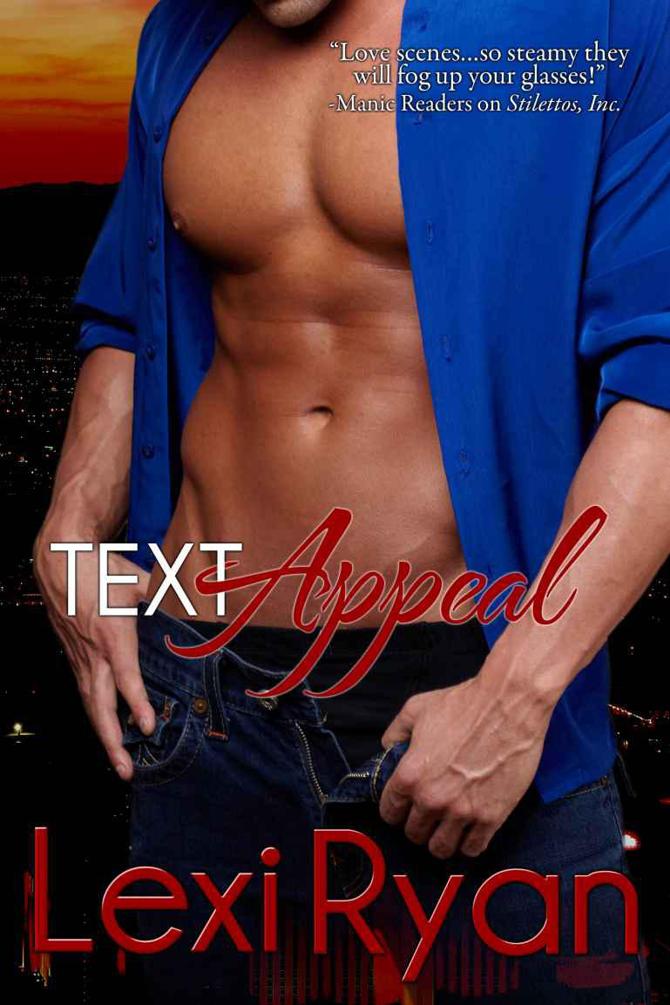 All rights reserved. This copy is intended for the original purchaser of this book. No part of this book may be reproduced, scanned, or distributed in any printed or electronic form without prior written permission from the author
except by reviewers who may quote brief excerpts in connection with a review
.  Please do not participate in or encourage piracy of copyrighted materials in violation of the author's rights. Purchase only authorized editions.

This book is a work of fiction. Any resemblance to institutions or persons, living or dead, is purely coincidental.

“
Hello, my name is Riley, and I am addicted to sexy lingerie.” Riley Carter steeled herself to walk past Fredrick’s of Hollywood without spending next week’s paycheck. She kept her stride long and even, moving along with the Miracle Mile crowd in the oppressive Las Vegas heat. With every step, disappointment crushed her internal lingerie junkie.

“Keep moving, Riley,” she told herself. But then she made a tactical error. She glanced at the store’s window and saw four big red letters dooming her to a month of tap water and peanut butter sandwiches: SALE.

The mother ship was calling her home.

Riley peeked over each shoulder, scanning the crowd for familiar faces before tucking her head and making a sharp right into the store.

“Senorita Carter,” Javier, the doorman, said as she entered the store. “We’ve missed you. Where’ve you been?”

Heat blasted her cheeks. She’d failed in her attempts to break her slightly naughty and very secret little addiction. She had made some progress, though. It had been twenty-six days, two hours and—she glanced at her watch—five minutes since she’d fed her inner vixen. In that time, she hadn’t bought a single bustier, teddy, or lacey panty. “It hasn’t been that long,” she said, but it had felt like an eternity. So what? She had a lingerie addiction. She lived in Sin City, where people came to feed old addictions—and find new ones. In comparison, lingerie was harmless—though an old-fashioned crack habit might have been cheaper.

“Big sale today,” Javier was saying, but she’d already zeroed in on the sale racks, mentally calculating her budget.

To her right, a mannequin wore a black leather bustier with red piping and matching corset laces—not a sale item. She wondered if
Chaz
would approve of it—or of any of the hundreds of naughty-but-never-worn items in her collection. She imagined the leather hugging the underside of her breasts, leaving the tops exposed. She had a pair of red stilettos that would look fabulous with—

She narrowed in on the deep discount sale bins. Thirty seconds later, she was elbow deep in thongs, garter belts and
crotchless
panties.

She studied a vibrant pink pair of the latter and bit her lip. Though her collection would put the famed Victoria and all of her secrets to shame, she’d yet to indulge in
this particular variety of naughtiness. What was the point?
Crotchless
panties were for women who had illicit rendezvous in restaurant bathrooms or the backs of limos. They were for women whose boyfriends were so hot for them they couldn’t wait the two-point-five seconds required for panty removal.

In short, they were for
hoo
-haws that saw more sex than a hotel room above a twenty-four-hour wedding chapel on the Strip.

Riley sighed and fingered the lace tie at the panty’s hip. A smile curved her lips as she remembered the text
Chaz
sent her that morning.

I miss you. Are you
available for dinner?

She hadn’t gotten a chance to answer him before her cell had gone missing.
Chaz
was the kind of guy she’d always wanted. He was courteous and gracious, and her father loved him. Like Riley,
Chaz
worked for her father’s empire: Carter Hotels and Entertainment. He understood the demands of the business.

“Black lace would be a better contrast against your fair skin,” someone said behind her.

Riley jumped and dropped the panties. Cheeks ablaze, she looked up.

“But I like the style. I could definitely see you in something like that.” Charlie Singleton—the face of professional poker—stood before her wearing Ray-Bans and a come-hither smile that made her insides do a little Snoopy dance.
Eyes concealed by his ever-present shades, the only sign of his approving once-over was
slight tilt of his head and the Machiavellian smile twisting his lips. Damn it all, but he made her skin tingle.

Of course he would. Charlie liked women—in clothes, in lingerie, out of clothes, out of lingerie. From what she’d seen, he didn’t discriminate. Heck, he probably made eyes at the old ladies who took up residence in front of the slots at the Bellagio. It was his special talent. He made every woman feel like the only one in the room. Or, at least, the only one who mattered.

“I’m just…I’m just picking something up for my friend,” she stammered.

Charlie’s broad chest shook with his silent laugh. “Isn’t that the excuse I’m supposed to use?”

Riley pulled her shoulders back and stuck out her chin. “No, I don’t imagine you’d use an excuse at all. Instead, you’d tell me that you were looking for something skimpy for your latest supermodel conquest. Then you’d probably try to get me to help you pick it out.”

He cocked his head, thoughtful, then, with a shrug, nodded. “I guess that’s a fair assessment. So, we’ve covered that I’m only here because I’m a womanizing cad.” His smile let her know he wasn’t displeased by the conclusion. “What about you? Is this a secret side of Riley I’ve been missing out on?”

Good gracious! She needed Charlie Singleton knowing about her lingerie addiction like she needed a hole in the head.

With a sigh, Riley snuck a glance at the pink panties she’d dropped into the bin. Damn, Charlie! She was going to have to walk away empty-handed now. Her Inner Naughty Girl whimpered.

She shot Charlie a glare she hoped was withering.

He shook his head and pulled off his sunglasses, giving her a full view of his rarely-revealed ice blue eyes. She wished he’d put them back on.

Charlie had this unsettling habit of looking at her like she was a triple chocolate ice cream cone with a single drip running down the side—a look that worried her as much as it turned her on.

“I’m glad to see you, Riley,” he said, flashing that signature smile again. “I’ve been thinking about you.” He eyed the discount bin. “And I can’t say I mind the circumstances.”

She
nodded,
pretending that smile didn’t turn her insides to goo, pretending part of her hadn’t been counting down the days until next week’s thirtieth annual Grand Escape Resort and Casino’s National Poker Tournament. Since her father’s hotel hosted the tournament, it meant guaranteed face time with Mr. Two Scoop Sundae.

She liked to look at Charlie. She liked the way he looked at her. Liked the way her belly flip-flopped when he entered a room. What was the harm in that? It wasn’t as though she planned to
do
anything about it.

“Have you seen your sister yet?” she asked, groping for a subject safer than lingerie or even why he might have been thinking about her. Riley’s roommate, Lacey, was Charlie’s sister. Charlie had moved to L.A. as a teen and still kept a home there, but he was in Vegas often enough for poker tournaments that he and his sister remained close.

Charlie shook his head.
“Just got in.”

And Fredrick’s was his first stop?
Further evidence that Charlie was capital B, capital N, Bad News.
Riley sighed and stole a final glance at the panties.
Adieu, my friend. We could have been great together
. “Well, I’ll let her know. I lost my phone this morning and she’s meeting me to help me pick out a new one.” In fact, she was supposed to be on her way right now.
Not
shopping for lingerie with Charlie No-Other-Man-Will-Ever-Measure-Up Singleton.

Charlie looped his finger under the ribbon of the panties he’d caught Riley holding. He lifted them from the bin. “On second thought,” he murmured, “the vibrant pink would look good with your dark hair.”

Riley covered her face. “Oh. My.
God.
You did not just say that.”

“What?” He pulled away her hand.

“I don’t want you thinking about my hair
down there
,” she whispered.

Charlie chuckled. “Who said anything about
down there
?” He shifted his gaze to the panties and, upon spotting their special feature, broadened his smile. “Well, I’ll be damned. You’re a little kinky, aren’t you?”

She slapped at his hand, trying to make him drop the offending panties. “They’re not for me,” she seethed. “I have a friend who...who...” What? Had a medical need for
crotchless
panties? Bluffing had never been Riley’s strength. “She’s getting married.”

He cocked a brow. “Honey, married women don’t wear panties like these. These are reserved for wild single chicks, or...” He studied her for a beat.
Raised a brow.
“...good girls with a secret naughty side?”

One of the saleswomen approached. “How are you today, Miss Carter? Is there anything we can get for you?”

Riley cringed. She wanted to peek at Charlie—did he notice the saleswoman calling her by name?—but she was too nervous. There were plenty of reasons they might know her…

“I saw you noticing the black leather bustier,” the woman continued. “I’ll be honest, I thought of you when it came in. I thought, ‘Miss Carter would just
swoon
for this!’ And I was right, wasn’t I? We even have a matching red leather thong. I tucked back a set in your size so we wouldn’t sell out before you made it in. I know how you like me to do that.”

“Um...” Riley wished she could disappear. “No, thanks, I don’t think that’s what I’ll be getting my
friend.
” She risked a glance at Charlie.

Woman Hating by Andrea Dworkin
Something Like an Autobiography by Akira Kurosawa
Surprise Package by Henke, Shirl
Fates Tied by Jack Wildman
Agatha H. And the Clockwork Princess by Phil, Foglio Foglio
Sylvia: A Novel by Leonard Michaels
Until Angels Close My Eyes by Lurlene McDaniel
Unknown by Unknown
Zero Degrees Part 1 by Leo Sullivan, Nika Michelle
The Hours Before Dawn by Celia Fremlin
Our partner