Read The 2 12 Pillars of Wisdom Online 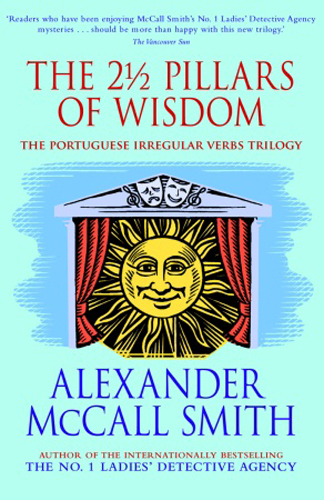 Alexander McCall Smith
is the author of over sixty books on a wide array of subjects. For many years he was Professor of Medical Law at the University of Edinburgh and served on national and international bioethics bodies. Then in 1999 he achieved global recognition for his award-winning No.1 Ladies’Detective Agency series, and thereafter devoted his time to the writing of fiction, including the 44 Scotland Street, Sunday Philosophy Club and Portuguese Irregular Verbs series. His books have been translated into forty-two languages. He lives in Edinburgh with his wife Elizabeth, a doctor.

The
No. 1 Ladies’ Detective Agency
Series

The No. 1 Ladies’ Detective Agency

Tears of the Giraffe

The Kalahari Typing School for Men

The Full Cupboard of Life

In the Company of Cheerful Ladies

The Good Husband of Zebra Drive

The Right Attitude to Rain

The Careful Use of Compliments

The World According to Bertie

The 2½ Pillars of Wisdom

THE 2½ PILLARS OF WISDOM

All rights reserved.
No part of this publication may be reproduced, stored in a retrieval system, or transmitted, in any form or by any means, without the prior permission in writing of the publisher, nor be otherwise circulated in any form of binding or cover other than that in which it is published and without a similar condition including this condition being imposed on the subsequent purchaser.

Von Iglefeld had heard the three of them described as the Three Pillars of Wisdom, but looking at Professor Dr Detlev Amadeus Unterholzer he came to the conclusion that perhaps The 21/2 Pillars of Wisdom might be more appropriate.This, he thought, was rather funny.

The 2½ Pillars of Wisdom

EINS The Principles of Tennis

ZWEI Duels, and How to Fight Them

The Finer Points of Sausage Dogs

ZWEI A Leg to Stand On

DREI On the Couch

VIER The Bones of Father Christmas

At the Villa of Reduced Circumstances

EINS On being Light Blue

ZWEI At the Villa of Reduced Circumstances

This is for
REINHARD ZIMMERMANN

EINS
The Principles of Tennis

ZWEI
Duels, and How to Fight Them

The Principles of Tennis

Professor Dr Moritz-Maria Von Igelfeld often reflected on how fortunate he was to be exactly who he was, and nobody else. When one paused to think of who one might have been had the accident of birth not happened precisely as it did, then, well, one could be quite frankly
appalled
. Take his colleague Professor Dr Detlev Amadeus Unterholzer, for instance. Firstly, there was the name: to be called Detlev was a misfortune, but to add that ridiculous Mozartian pretension to it, and then to culminate in Unterholzer was to gild a turnip. But if one then considered Unterholzer’s general circumstances, then Pelion was surely piled upon Ossa. Unterholzer had the double misfortune of coming from an obscure potato-growing area somewhere, a place completely without consequence, and of being burdened in this life with a large and inelegant nose. This, of course, was not something for which he could be blamed, but one might certainly criticise him, thought von Igelfeld, for carrying his nose in the way he did. A difficult nose, which can afflict anybody, may be kept in the background by a modest disposition of the head; Unterholzer, by contrast, thrust his nose forward shamelessly, as might an anteater, with the result that it was the first thing one saw when he appeared anywhere. It was exactly the wrong thing to do if one had a nose like that.

The von Igelfeld nose, by contrast, was entirely appropriate. It was not small, but then a small nose is perhaps as much of a misfortune as a large nose, lending the wearer an appearance of pettiness or even irrelevance. Von Igelfeld’s nose tended slightly to the aquiline, which was completely becoming for the scion of so distinguished a family. The von Igelfeld name was an honourable one:
Igel
meant hedgehog in German, and von Igelfeld, therefore, was
hedgehogfield
, an irreproachable territorial reference that was reflected in the family coat of arms – a hedgehog recumbent upon a background of vert. Unterholzer, of course, might snigger at the hedgehog, but what could he do but snigger, given that he had no armorial claims, whatever his pretensions in that direction might be.

But even if von Igelfeld was relieved that he was not Unterholzer, then he had to admit to himself that he would have been perfectly happy to have been Professor Dr Dr (
honoris causa
) Florianus Prinzel, another colleague at the Institute of Romance Philology. Prinzel was a fine man and a considerable scholar, whom von Igelfeld had met when they were both students, and whom he had long unconditionally admired. Prinzel was the athlete-poet; von Igelfeld the scholar – well, scholar-scholar one would probably have to say. If von Igelfeld had been asked to stipulate a Platonic von Igelfeld, an ideal template for all von Igelfelds, then he would have chosen Prinzel for this without the slightest hesitation.

Of the three professors, von Igelfeld was undoubtedly the most distinguished. He was the author of a seminal work on Romance philology,
Portuguese Irregular Verbs
, a work of such majesty that it dwarfed all other books in the field. It was a lengthy book of almost twelve hundred pages, and was the result of years of research into the etymology and vagaries of Portuguese verbs. It had been well received – not that there had ever been the slightest doubt about that – and indeed one reviewer had simply written, ‘There is nothing more to be said on this subject. Nothing.’ Von Igelfeld had taken this compliment in the spirit in which it had been intended, but there was in his view a great deal more to be said, largely by way of exposition of some of the more obscure or controversial points touched upon in the book, and for many years he continued to say it. This was mostly done at conferences, where von Igelfeld’s papers on Portuguese irregular verbs were often the highlight of proceedings. Not that this eminence always bore the fruit that might be expected: unfortunately it was Prinzel, not von Igelfeld, who had received the honorary doctorate from the University of Palermo, and many people, including von Igelfeld, thought that this might be a case of mistaken identity. After all, from the viewpoint of the fairly diminutive Sicilian professors who bestowed the honour, three tall Germans might have been difficult to tell apart. These doubts, however, were never aired, as that would have been a breach of civility and a threat to the friendship. But just as the doubts were never mentioned, neither was the honorary doctorate.

At the Annual Congress of Romance Philology in Zürich, the three professors decided to stay in a small village on the edge of the lake. There was an excellent train which took them into the city each morning for the meeting, and in the evening they could even return by the regular boat, which called at the jetty no more than five minutes from the hotel. It was altogether a much more satisfactory arrangement than staying in Zürich itself, surrounded by banks and expensive watch shops. As von Igelfeld remarked to the others: ‘Have you noticed how Zürich ticks?
Klummit, klummit, ding!
I could never sleep in such a town.’

The Hotel Carl-Gustav, in which the three professors stayed, was a large old-fashioned establishment, much favoured by families from Zürich who wanted to get away, but not too far away. Anxious bankers, into whose very bones the Swiss work ethic had penetrated, stayed there for their holidays. It was highly convenient for them, as they could tell their wives they were going for a walk in the hotel grounds and then slip off to the railway station and be in their offices in Zürich within twenty minutes. They could then return two hours later, to pretend that they had been in the woods or at the lakeside; whereas in reality they had been accepting deposits and discounting bills of exchange. In this way, certain Zürich financiers had acquired the reputation of never going on holiday at all, which filled their rivals with feelings of dread and guilt.

Prinzel had arrived first, and taken the best room, the one with the uninterrupted view of the lake. He had felt slightly uneasy about this, as it was a room which should really have gone to von Igelfeld, who always got the best of everything on the strength of
Portuguese Irregular Verbs
. For this reason Prinzel was careful not to mention the view and contrived to keep von Igelfeld out of his room so he could not see it for himself. Unterholzer, who always got the worst of what was on offer, had a slightly gloomy room at the side of the hotel, above the dining room, and his view was that of the hotel tennis court.

‘I look out onto the tennis court,’ he announced one evening as the three gathered for a glass of mineral water on the hotel terrace.

‘Ah!’ said von Igelfeld. ‘And have you seen people playing on this tennis court?’

‘I saw four Italian guests using it,’ said Prinzel. ‘They played a very energetic game until one of them appeared to have a heart attack and they stopped.’

The three professors contemplated this remarkable story for a few moments. Even here, in these perfect surroundings, where everything was so safe, so assured, mortality could not be kept at bay. The Swiss could guarantee everything, could coordinate anything – but ultimately mortality was no respecter of timetables.

Then Prinzel had an idea. Tennis did not look too difficult; the long summer evening stretched out before them, and the court, since the sudden departure of the Italians, was empty.