Read The '85 Bears: We Were the Greatest Online

The '85 Bears: We Were the Greatest 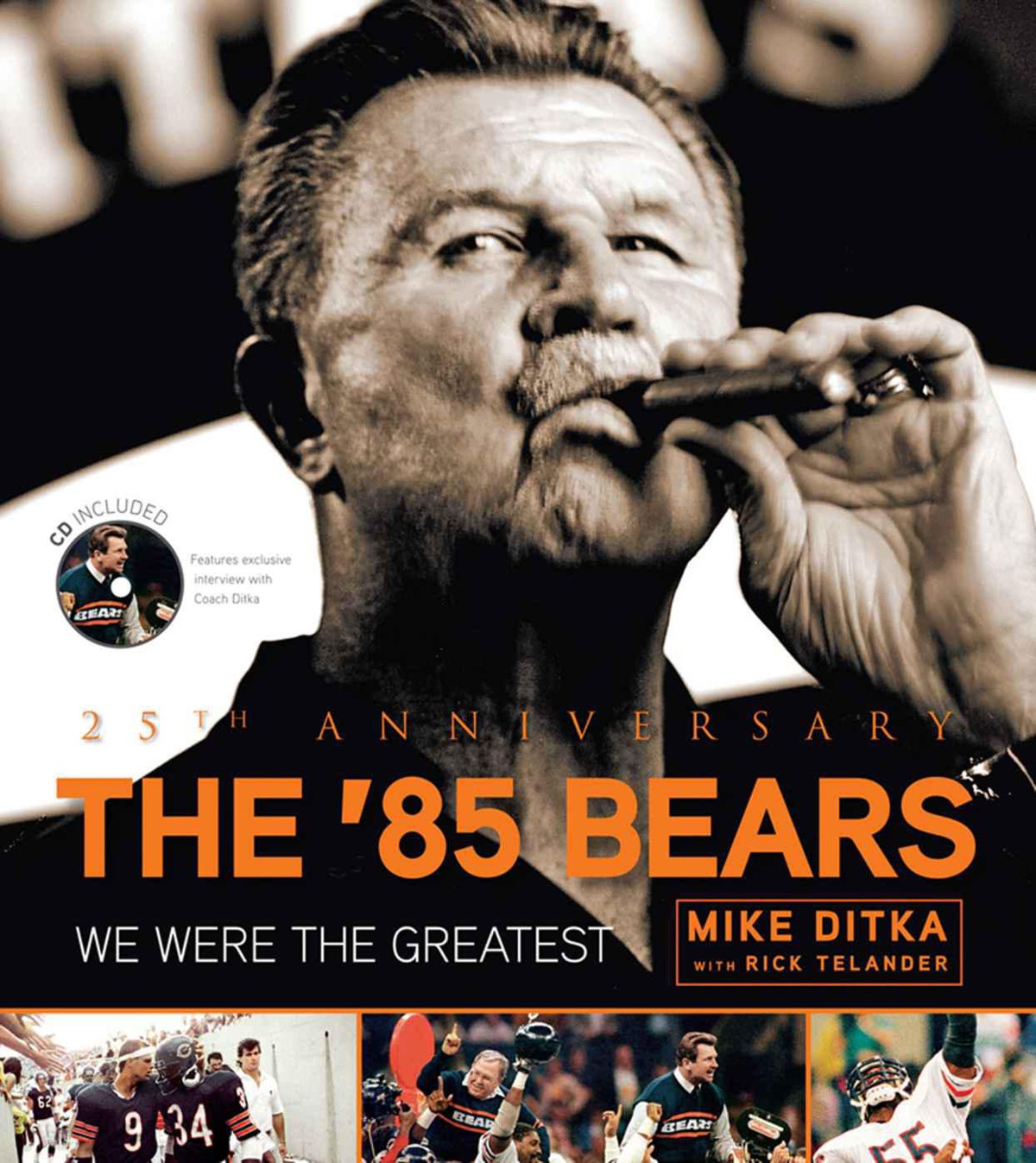 No part of this publication may be reproduced, stored in a retrieval system, or transmitted in any form by any means, electronic, mechanical, photocopying, or otherwise, without prior written permission of the publisher, Triumph Books, 542 South Dearborn Street, Suite 750, Chicago, Illinois 60605.

This book is available in quantity at special discounts for your group or organization. For further information contact:

All photographs courtesy of the
Chicago Tribune
except where otherwise noted

To those men on the field who made this all happen, and to the memory of the Old Man.

To the good life.

I want to thank all of those writers who documented the Bears’ run to the Super Bowl, particularly the columnists and beat reporters for the
Chicago Sun-Times,
whose old news clips were so valuable in my research.

I also got insight and information from these books:
Halas by Halas,
by George Halas and Arthur Veysey;
Ditka: An Autobiography,
by Mike Ditka and Don Pierson;
Papa Bear,
by Jeff Davis;
It’s Been A Pleasure: The Jim Finks Story,
by seven various writers;
Ditka
by Armen Keteyian;
Singletary on Singletary,
by Mike Singletary and Jerry Jenkins; and
McMahon,
by Jim McMahon and Bob Verdi.

Chapter I: Where Are the Trucks?

Chapter II: We’ll Be Back

Game 2: Think This Is One-Sided?

Game 5: Picked Up by a Pickoff

Chapter VI: A Dog on My Ankle

Game 7: Refrigerator in the Living Room

Chapter X: Howling Sounds and Defenders from Another Planet

Game 10: Against Fuller, Lions on Empty

Chapter XII: We Can Do Almost Everything, but Maybe We Can’t Dance

Chapter XIII: Headband Craziness, a Yuppie Who Likes to Hurt People, the Elephant in the Snow

Game 12: Numbers Add Up to an Even Dozen

Game 13: One and Only: Season Smudged

Chapter XV: Stick a Needle in This

Game 16: Many Stars of This Show

T
o me, it seems like only yesterday that the Mike Ditka Bears ruled the earth. Part of that is because during the amazing and amusing 1985 season, I lived next door to the team. The east property line of my yard was the west end line for the Bears’ practice facility in Lake Forest. A chain-link fence—with a number of large, rusty-edged, human-sized holes in it—a few ash trees, and some accidental buckthorn sprouts were all that separated my house from the gridiron.

My wife and I and our two baby girls had moved from a two-bedroom Evanston apartment in 1984, risking everything on a down payment and a strangling mortgage, heading farther north in the ‘burbs where things were cheaper and we could afford—strange as it may seem now with current real estate prices in this area—our first house. The 100-yard grass field next door was vacant when we arrived in the spring of 1984. It was called Farwell Field, I learned, and belonged to Lake Forest College. Remarkably, the Bears shared the field all late summer and fall with the mighty Division III Lake Forest Foresters, a band of cheerful, red-and-black-clad, nonscholarship collegians about the size of average high school players. The Foresters would tear up the field on Saturday afternoons against Beloit and Lawrence—really destroy the sod when they played in the occasional monsoon—and then the Bears would practice on the maimed surface the rest of the week. By late November the grass would be brown, clotted, and ruined. At the east end of the field was the low brick structure known as Halas Hall, with the large office window to the far south being that of young team president Michael McCaskey and the window to the north being that of young head coach Mike Ditka. In time I would realize that as I stood in our ground-floor bathroom when the leaves were gone, casually relieving myself, I could see into the working quarters of each man.

Of course, I didn’t know much about this yet. I worked for
Sports Illustrated
at the time, and I loved sports. But mostly I traveled for my stories. To Washington and San Francisco and Pittsburgh,
places where they had real NFL teams and real heroes. I had heard the Bears lived next door to our new place, but my mom had actually found the house and told me about it while my family was vacationing in Florida, and I made the earnest-money payment sight-unseen. At any rate, in May when our burgeoning troupe—soon to be six of us—moved our few possessions into the old house on Illinois Road, nobody was in the big yard next door.

Who cared about the Bears, anyway?

Still, the Bears had this fellow named Payton. And they had a nostalgia-laden tradition. And starting in 1982 they had a new coach with fire in his eyes, a sometimes-frightening, sometimes-inspiring former All-Pro tight end by the name of Mike Ditka. He had replaced Neill Armstrong, coming straight from a special teams job with the Dallas Cowboys, apparently at old man George Halas’s request. Which made folks wonder if the acerbic, grumpy Papa Bear had finally gone around the bend. Special teams coaches didn’t become head coaches. Offensive coordinators did. Defensive coordinators did. Special teams coaches became not much of anything.

Ditka was a guy who broke racquets in rage when he played racquetball against Cowboys staff members like Dan Reeves and the great calm one himself, Tom Landry. Ditka made his Cowboys receivers run, and when they didn’t run right, he swore at them. He challenged them to fight. Right there, on the spot! He turned red. He turned purple. As an athlete he had been overwhelming in high school, dominant at Pitt, ferocious in the NFL. In 1983, his second year as Bears head coach, he had been so infuriated after a loss, he punched a filing cabinet with his right hand, breaking a bone in the process. At the next game he inspired his team by saying, “Win one for Lefty.” He was perpetually agitated, outspoken, a puffing volcano always on the verge of eruption. This was the head coach of the storied Chicago
franchise, the granddaddy of the league? Help.

But, Ditka knew what it meant to be a Bear. For six years, starting in 1961, he had played like a maniac, on and off the field. He defined toughness and grit at the tight end position. Despite his Pennsylvania steel town roots and accent, he came to embody the soul of the black-and-blue division Bears along with two other striving souls—Gayle Sayers and Dick Butkus. Traded to the Eagles in 1967 and then to the Cowboys in 1969, Ditka played in two Super Bowls and was an assistant coach in two others. The idea of Ditka as a head coach seemed—what would you call it?—intriguing? What if his passion could be harnessed, focused, reproduced, and transferred like magic capes to all those players under him? What if…

Gradually the Bears began to make their presence known next door. There was a minicamp or two. And sometimes I would see Ditka in a golf cart on the edge of the grass, observing, gesturing, sometimes seated with oddball young quarterback Jim McMahon or even with the great, squirming Walter Payton himself. Sometimes I could hear Ditka yell. Sometimes I could see his orange or blue sweatshirt glinting through the bushes as he limped from drill to drill. He chewed gum constantly, as though his jaw had to move nonstop to compensate for the uncertainty of his football-ravaged hip joints. There were the usual practice noises—grunts, whistles, hollerings, pads cracking, the leathery thud of punts departing Dave Finzer’s and later Maury Buford’s foot and the four- or five-second delay before a reciprocating thud was heard as each ball touched earth.

World of Fire (Dev Harmer 01) by Lovegrove, James
Feeling This by Allen, Heather
Pirate Ambush by Max Chase
Rome 3: The Eagle of the Twelfth by M C Scott
A Reputation For Revenge\The Greek Billionaire's Baby Revenge by Jennie Lucas
The Chalk Girl by Carol O'Connell
Vacation to Die For by Josie Brown
Vampire Legacy (Book 4 of the Dragon Heat series) by Ella J. Phoenix
King of Forgotten Clubs by Recchio, Jennifer
Guardians of The Flame: To Home And Ehvenor (The Guardians of the Flame #06-07) by Joel Rosenberg
Our partner