Read The Adventures of Button Online

The Adventures of Button 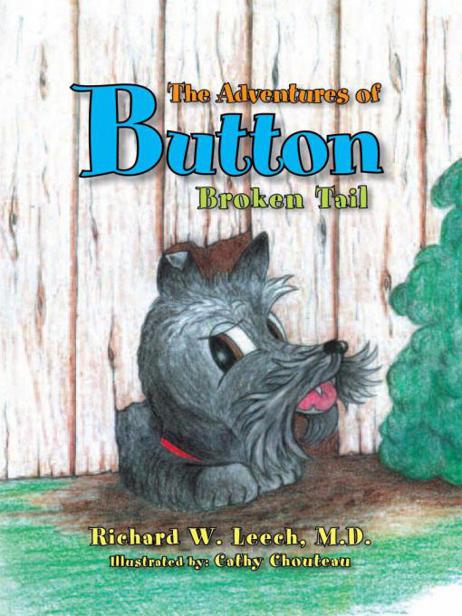 This book was printed in the United States of America.

The Adventures of Button

The Story of Delph

Buttons and Great Horde of Rats

How the Littlest Dragon Saves the Day

The Raven of Elderwood

This book written in simple English prose with the fullest intention of entertaining the reader. However, do not fear to pick up a Webster's Dictionary; it is an incredibly fascinating book, a journey in itself. Read The Adventures of Buttons with your parents, share it, and enjoy.

There are a very few animals not native to Oklahoma. I have strayed into the world of fantasy fiction with the introduction of Sara, but I still like to go adventuring, too. All of the dogs who join Buttons I have known personally. They were and remain grand, in my memories.

The small, black figure negotiated the last of the back porch steps in a controlled fall, executing a forward roll in her haste to reach the fence. Winding her way through spring-fresh daffodils, she reached her goal only to stop and cautiously look back. No one was to be seen, and she bent down, seeking the small hole in the soft dirt she had begun the day before. With hardly a glance, she began to dig, bits and pieces of dirt flying furiously backwards along her rotund body. It took but a moment for her to dig a hole big enough to permit her to push her long-tapered snout outside the confines of the wooden fence.

She worked her way forward and glanced at both sides before emerging into the field that seemed to go forever all about her.

She snorted, a quiet, soft snort to be sure, but it cleared her nose which worked quickly to pick any strange or mysterious scents. Finding none, she bound forward. Free at last, Buttons was again into
the
field, seeking new horizons and distant adventure.

Her stout legs rapidly carried her forward along the barely perceptible paths of the rabbits and mice that inhabited the stretch of fence along her masters’ backyard. The day was bright, the sky clear of living creatures. Only distant cirrus clouds passed far overhead. Buttons paid no attention to them for her nose was close to the ground, sniffing to the left and then to the right. Small gouts of dust swirled into the air with each snort. Strange and alluring scents filled her nose with the passage of the early morning’s activities. How she would have liked to investigate each of them, but her Jon waited in his room while she greeted the day for the first time. Jonnie was wrestling with a new shirt for school, and was gathering his books and paraphernalia because the school bus would be along in minutes. Buttons has no other thought than the odors and drifting breezes that brought so much information to her.

She continued her race through the brown thatch of grasses that reached above her shoulders. Her pace was fast and her passage swift. Where she went made no difference for she was seeking whatever the field had to offer for fun and adventure.

The field sloped gradually from southwest to northeast toward the old and rusting fence of the graveyard which lay partially within the field. A tall line of ancient oaks split the graveyard into an ancient portion and newer sector. The heavy branches of the oaks protected the greater portion of the graveyard and provided homes for innumerable birds and four-legged creatures. These latter were Button’s goal this late morning. But for the moment, she was content just frolicking along. Her world was in her nose, and the many new and enticing odors that reached her keen, though young, senses totally blinded her to the large sinuous form before her.

The rope-like body was large, even for its kind. Button’s headlong rush was quickly detected and the creature’s passage through the tall, dry grass slowed but rather in anticipation or curiosity was not evident.

Buttons, of course, paid no attention. She gamboled along at her ground-eating pace totally oblivious to the fate that awaited her. Her passage was abruptly halted as she bowled into the form before her. A loud grunt greeted her as she unceremoniously sat back on her haunches.

“Wow,” she exclaimed as she looked at her roadblock. “Boy, are you big!” Moving forward, she peered over the large, round back. “Hey, you’re even shorter than me.” As she moved toward the head that towered above her, her nose was sniffing along the ground, examining the newcomer more closely than many had in the past. “Hey, where’s your feet? I can’t find them. I have four, you see.” Buttons rolled over on her back to the amazement of her new acquaintance. Her forelimbs were limb, and her small black feet kicked slowly in the air.

“I do see, but . . .” He got no further as Buttons immediately regained her feet and stood on her hind legs, the right forepaw bracing against her new friend, while the left leg hung limply.

“Gee, you even longer than Shadrack, the water moccasin. Do you know Shadrack?”

Her sinuous friend began to open his mouth, when Buttons continued and interrupted, “Hey, you know, you’re not the same all over. Pretty colors, too. I’m only black, well, really, shiny and black. My hair goes with my nose, you know. Color-coordinated, that’s what my boy calls it. What’s your name?”

“Sssssso nicccce.” Buttons giggled at her own joke as she launched herself over Sssereck’s broad back. Four legs hung momentarily in the air as her round belly rested on the top of Ssserek’s back. Then, with a whoosh of air, she slid to the ground on the opposite side.

Peering down the long, smooth flank, she exclaimed, “Wow, I bet it’s a day’s journey around you.”

“That’s nicely put, young lady.” He muttered in a low tone,”Must be getting old,I’m repeating my self.”

“Well, it’s only the truth, you know,” Buttons responded as she marched forward to place herself squarely before Ssserek. Ssserek’s head swayed to and fro a foot above her. “Hey, can’t you lower your head? I can’t see you very well.” Buttons sat up as Ssserek’s nose began to approach her, then slowly rolled onto her side. “My sit-up still slides to the side, you see.”

Ssserek’s soft, sibilant hiss made her scramble to her feet more quickly than normal. “Hey, I’m not making fun of you, really. Besides, you’re really very nice to look at.”

Ssserek’s head was by now swaying just above Button’s head. The broad snout pointed side to side as his slender, red tongue darted back and forth as he maneuvered to better view Buttons.

His eyes began to whirl as he measured the small four-legged creature before him. “Hum, humm, hummm. Bigger than a mouse, but appears harder than the bunnies. Hummmm.” His eyes whirled more rapidly and red flecks appeared in them.

“You have pretty brown eyes, just like me, you know. Please stop moving so much.” Buttons again tried to sit up, and when that failed, she stood for a second so that she might get a better view.

“What kind of animal are you?” Ssserek’s head was by now only inches from Buttons’s nose. “I stick my tongue out to pant, you know. But yours goes all the time, doesn’t it?”

Ssserek’s quick answer came before Buttons could continue. “I am of the great snake clan, and I do not pant. My tongue tells me much about the world around me, and it tells me you are a very fine . . .”

He hesitated, sighed, then continued as Buttons interposed a “Well.”

“A very nice young lady,” he sighed again as his thoughts were brought back to the young dog before him. “Oh, well.”

Buttons looked at him expectantly. “Gee whiz, your eyes aren’t going around and around anymore. That was very pretty, too, you know.”

“Will you be my friend?” Buttons was lying on her back, twisting to and fro as she stretched and scratched her back. Flipping upright, she continued unabashedly, “You’re really nice to look at, so tall and short, as it were. You know, there’s something moving back there.”

She was gazing intently toward Ssserek’s furthest component. “What happened to your legs? You know you didn’t say, and it certainly is, well not odd, but definitely different. You see what I mean?”

“I will be your friend. I am glad you appreciate my appearance. Many don’t. And yes, I am both tall and short.” Ssserek reared up to his greatest height, and gazed serenely down on the small creature before him.

“It is a very old tale,” Ssserek smiled for his own pun before continuing, “that is told within the snake clan of a time, a very long time ago. We had legs then, but . . .”

Ssserek dropped so that his left eye focused closely on Buttons’s right. “But—it is told by those who have no love for us—they say we lost our legs because of something a great, great ancestor, many times removed, did to people. I dismiss such cavil comments as mere hearsay, and you must pay no attention to it. We, the many clans of snakes, prefer the truth. We move with stealth and silence; we are subtle, as we are supple,(to himself, nice alliteration, don’t you think), and we are wise for we hold the histories of many clans in our thoughts.”

Buttons had lost interest through this lengthy peroration and was again watching Ssserek’s nether part.