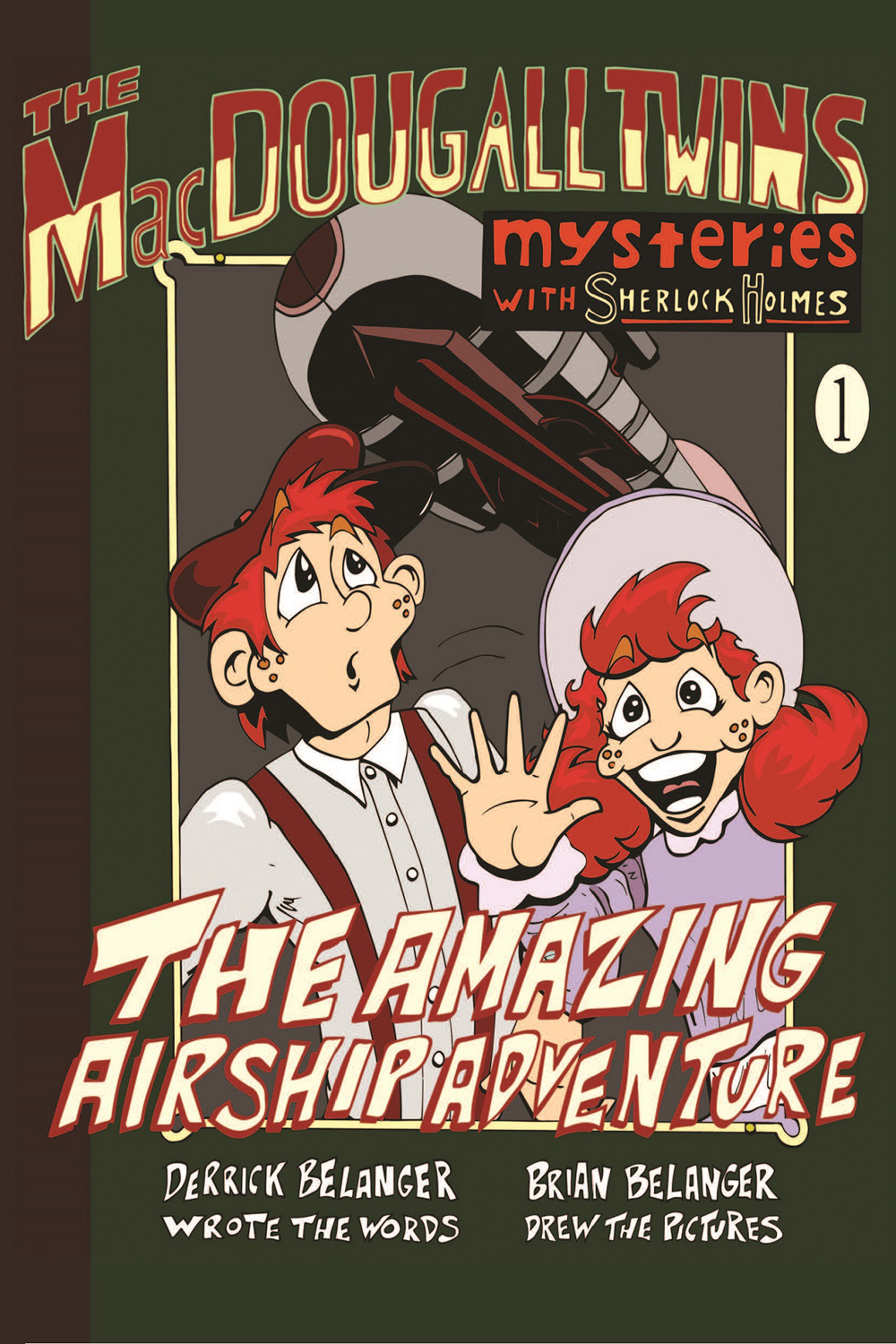 The MacDougall Twins With Sherlock Holmes 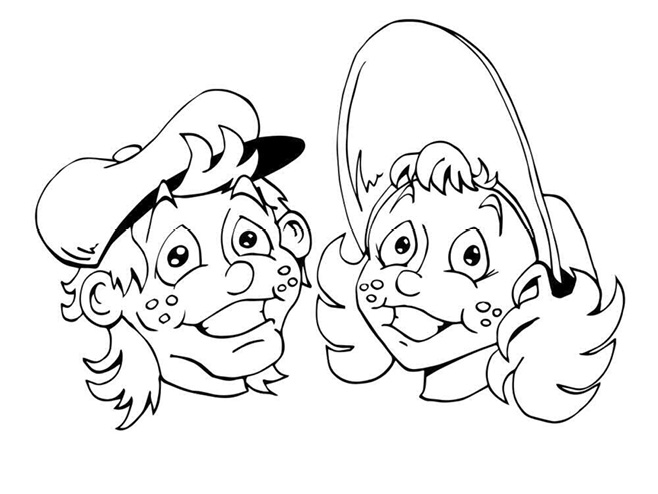 Digital edition converted and distributed in 2015 by

The right of Derrick Belanger and Brian Belanger to be identified as the authors of this work has been asserted by them in accordance with the Copyright, Designs and Patents Act 1998.

The opinions expressed herein are those of the authors and not of MX Publishing. 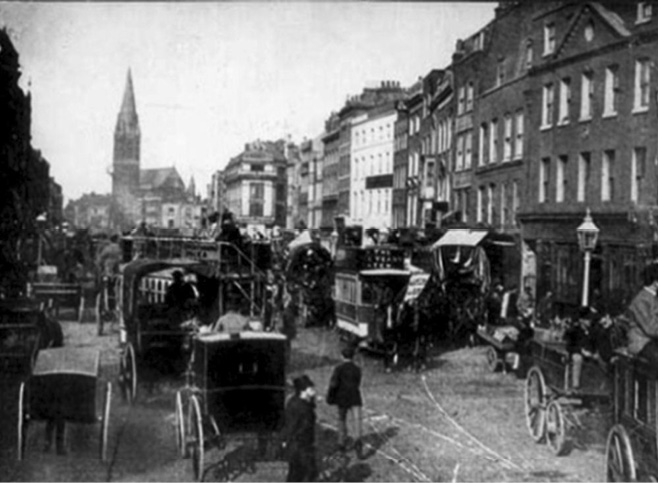 Sherlock Holmes heard a loud, “knock, knock, knock,” at the door of his home. With a smile, the great detective rose from his favorite easy chair, and went to personally greet his visitors. “Mrs. Hudson and Dr. Watson,” Sherlock called to his landlady and his good friend, “do be so kind as to let me answer the door.”

Mrs. Hudson was working very hard in the kitchen, making sure the potatoes were not overly done. Dr. Watson was checking on the goose they were having for dinner. Mrs. Hudson gave Sherlock a quick nod of her head in approval, and then she went back to checking on the gravy.

Sherlock Holmes had special guests tonight, two of the best detectives he had ever worked with. These two twins, Jimmy and Emma MacDougall, had helped Sherlock Holmes send the art thief Byron Von Trapp to prison. It did not matter to Mr. Holmes that the twins were only ten years old. They were honest, brilliant, and brave.

Sherlock opened the door and greeted his friends warmly. “Hello, hello, please do come in,” he said to everyone. 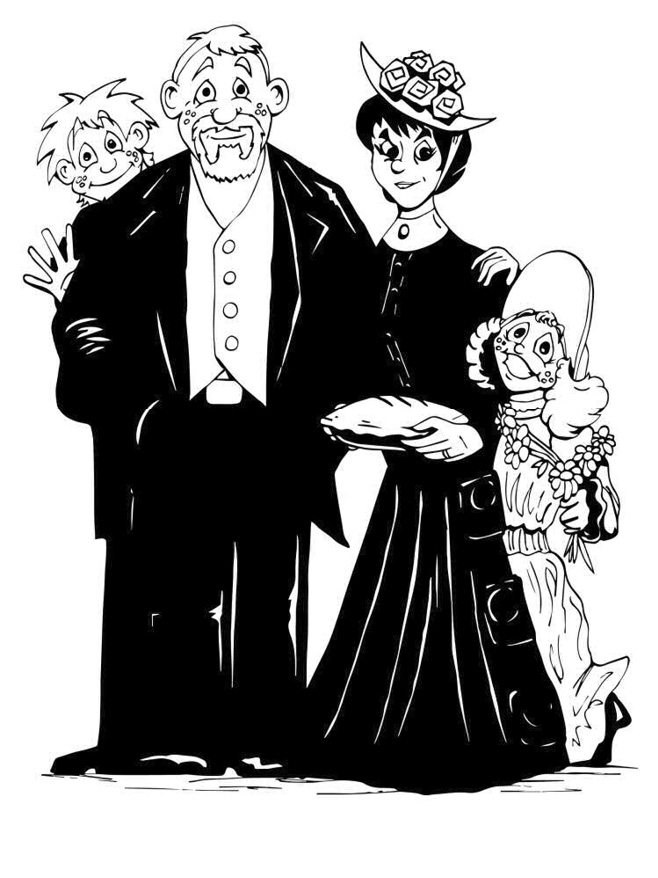 The family was standing at the entryway. Mr. MacDougall felt very uncomfortable because he was wearing his best evening dress. He was a head chimney sweeper, and he preferred being in dirty clothes rather than dressing up for a dinner party. As he walked in, he said, “Hello, Mr. Holmes. Very gracious of you inviting us over like this.”

“Nedley,” Sherlock said to him, “It is my pleasure. I see you were working on State Street today.”

Mr. MacDougall looked surprised. “Why Mr. Holmes, how do you know? I washed up proper.”

“Of course you did,” Sherlock said. “Still, the color of the ash on your thumb, mixed with the smell of soot in your hair, leads me to only one conclusion about your work location.”

“And Frances,” he said to Mrs. MacDougall. “I see you were working on a new quilt today.”

Mrs. MacDougall smiled and entered the house in her flowing gray dress. “That's right, Mr. Holmes.” Mrs. MacDougall didn't want to hear about how Sherlock Holmes knew about her sewing. She did not like that her children were friends with the detective. They were always getting into trouble, and she was afraid one day they would get hurt.

Next came the guests of honor. Sherlock stared at the two twins. Jimmy and Emma were not identical twins, but they looked remarkably similar. Both had freckled faces, smooth fiery red hair, and sparkling blue eyes. They were both tall for their ages. Jimmy stood at five and a half feet tall, and Emma's height was just over five feet. Both wore dark clothing, Jimmy in a black suit and Emma in a long sleeved dress.

“I see you have been practicing the violin today, Mr. Holmes,” Emma said, showing Holmes that she also could use the power of deduction.

Sherlock grinned. “Is it because of the way I am holding my left arm?”

“Naw,” Jimmy added, “It's because we could hear you playing all afternoon.”

Sherlock laughed. Emma had the brains and skill to be just as good a detective as Mr. Holmes. Jimmy was the joker, and while he was good at using deduction to solve crimes, he preferred going undercover to catch a thief.

Suddenly, they all heard a shout of, “Don't stand there at the door. Dinner is served.”

“We must not keep Mrs. Hudson waiting,” Emma said, and the three entered the home.

“I guess this will be a bit of a boring night,” Jimmy said to Sherlock. “No cases today.”

Sherlock laughed. “One never knows when a case might turn up.” Little did Mr. Holmes know that a case was just about to begin.

Everyone sat down at dinner and served themselves by passing the plates. As Dr. Watson scooped potatoes and cut himself a piece of goose breast, he asked the twins, “Jimmy, Emma, how is your detective work going these days?”

“Dr. Watson,” Mrs. MacDougall snapped at him, “must we talk about their cases at the dinner table? You know how I feel about them telling you about their adventures. I don't want you writing down their stories.”

Dr. Watson was known for publishing stories about Sherlock Holmes's most famous cases. He always wanted to write down the mysteries that the MacDougall twins solved, but Mrs. MacDougall refused to let him. She did not want her children to be famous. She wanted them to have a normal life.

“You can't blame me for trying,” Dr. Watson laughed, and he winked at the twins. He knew they wanted to tell their stories, but they respected their mother's wishes.

“You still should bring the twins to my office next week,” Watson continued, changing the subject. “I haven't checked up on them in nearly six months.”

“Oh, the kids are fine, Dr. Watson,” Mr. MacDougall explained. “Not even a skinned knee on Jimmy.”

“It is still wise to have them looked after by a doctor,” Sherlock Holmes said. “Sometimes small problems you don't see turn out to be big problems later. This reminds me of the case of the Man with the Missing Right Hand.”

“They look fine to me,” Mrs. Hudson chimed in, interrupting the detective. She did not want to hear yet another retelling of a famous case.

“I can't get over how much the twins have grown,” Mrs. Hudson said to their parents. “I've watched them turn from babies into a fine young man and woman.” Mr. and Mrs. MacDougall grinned at the compliment.

Everyone nodded in agreement, although Jimmy frowned, wishing the conversation would be about robbers and crime.
What is the point of eating dinner with Sherlock Holmes,
he wondered,
if I can't talk to him about mysteries?

“AAAHH!” came screams from the street.

“What is it?” someone else yelled. Sherlock Holmes dashed to the window. Everyone followed him. They all crowded around, looking out at the skyline.

“Emma, are you seeing what I'm seeing?” Jimmy asked his sister.

Floating above London was a strange, giant object. To Jimmy it looked like a giant flying silver barrel. It was the size of two busses put together, with great curved wings on its side, almost like someone put the barrel in the middle of an enormous boomerang. The flying object seemed to come straight out of space. It was slowly gliding over the buildings, causing shouts and cries from the streets of London below. Suddenly, the aircraft turned in the sky and swiftly swooped towards Baker Street. 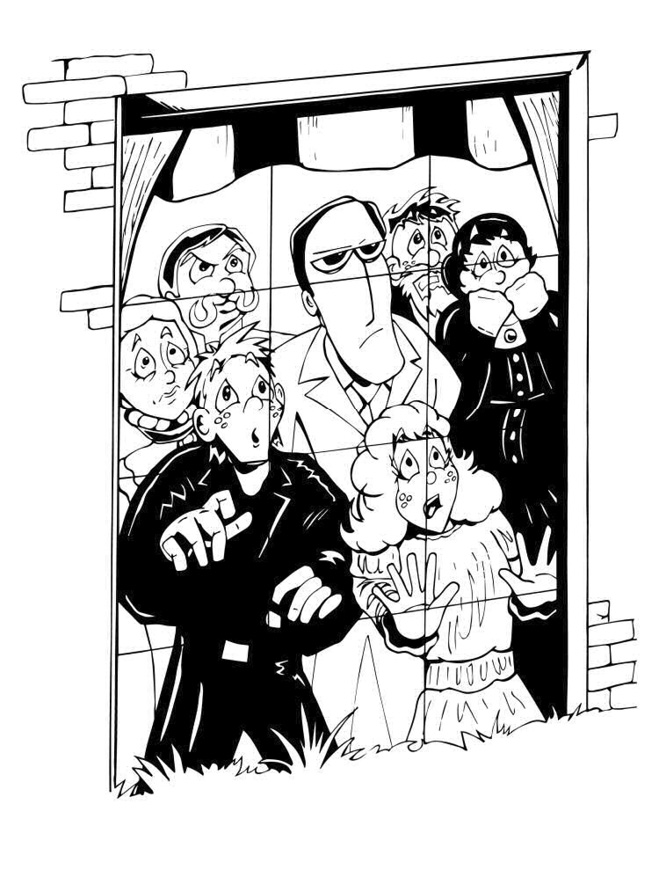 “Goodness, Holmes,” Dr. Watson said. “It is heading straight for the street below.”

The detective motioned with his hand for his friend to stay quiet. He was observing everything, and he didn't want to miss any details.

A giant crowd had gathered in Baker Street as the aircraft floated towards them. Some
hansom cabs
[1]
, a
bus
, and several people on horses stopped and joined the growing crowd, gazing up at the object. Some pointed, others talked. A few people fled as the object came towards them, blocking out the sun. Suddenly, the shiny silver barrel stopped right above the crowd. It hovered for a mere moment, then FLASH! A huge blinding light shot out from the bottom of the craft. Everyone screamed and scattered. The horses neighed and screeched, then bolted in opposite directions. Two
hansom cabs
flipped over as their horses bolted away from the blinding light. The bus flung out of control right below Sherlock Holmes and the dinner guests. The driver was able to regain control of the horses just as the bus almost crashed straight into 221 B Baker Street.

“At least they're safe,” Mrs. Hudson consoled her.

“Look!” Jimmy called out. “The barrel..It's going to crash!”

The barrel ship began to quickly lower itself onto the street below. Just as its nose was about to smash into the ground, the ship wobbled, and then, seeming to defy gravity, it suddenly shot back up into the sky. It bobbed up and down slightly, and returned to its journey above Baker Street.

“Oh! It is going to fly right by us,” Emma said excitedly.

As the ship flew up past the window, Emma got a good look at the device. Below the giant silver ship, there appeared to be a small cargo hold, with a man on what looked to be a pedal of sorts. The man seemed to be running and steering the mystery ship, as if it was a bicycle.

Just as Emma peered forward to get a better look, a blinding light flashed through the window. Everyone ducked down, moved away, and Mrs. Hudson shouted out in pain. No one could see anything. Suddenly, there was a sound of smashing glass, and something fell into the room.

1
Fun Facts:
In the time period of this story, the automobile hadn't yet been invented. Everyone traveled by train, boat, or horse drawn carriage. A
hansom cab
was a two wheel carriage driven by a single horse. A
bus
(or omnibus) was a long carriage, driven by two horses, with seats along the sides.

Naw Much of a Talker by Pedro Lenz
The Book of Everything by Guus Kuijer
DropZone by Andy McNab, Andy McNab
Caveman Logic: The Persistence of Primitive Thinking in a Modern World by Hank Davis
A Home at Trail's End by Melody A. Carlson
Unthinkable (Undeniable Trilogy #1) by Ml Preston
Imperfect Killing by Delaney, Luke
Island that Dared by Dervla Murphy
Curtain Up by Julius Green
Sons of Angels by Rachel Green
Our partner