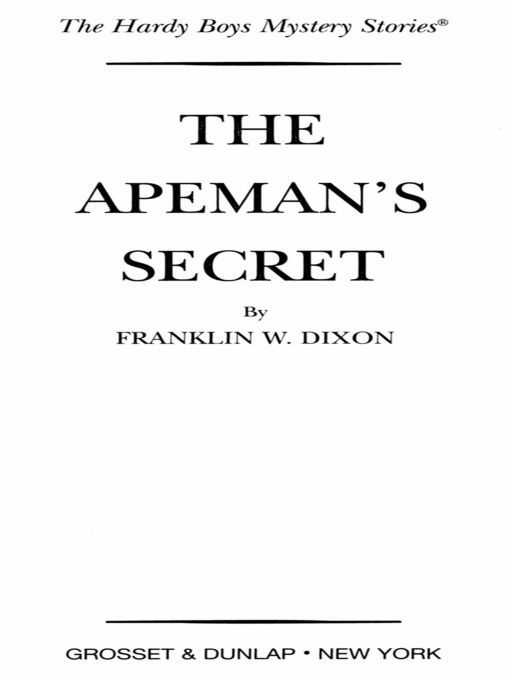 Table of Contents
Â
Title Page
Copyright Page
Â
Chapter 1 - Huge Footprints
Chapter 2 - Scraps of Evidence
Chapter 3 - Sneak Attack
Chapter 4 - A Savage Surprise
Chapter 5 - Hot News
Chapter 6 - A Sticky Shadow
Chapter 7 - Muscle Men
Chapter 8 - Sea Signal
Chapter 9 - Deep-Sixed!
Chapter 10 - An Urgent Message
Chapter 11 - Another Amulet
Chapter 12 - A Ghostly Figure
Chapter 13 - The Face at the Window
Chapter 14 - Stolen Secrets
Chapter 15 - Code-Word Clues
Chapter 16 - A Baited Trap
Chapter 17 - Night Flight
Chapter 18 - The Sleeping Ogre
Chapter 19 - Hidden Duo
Chapter 20 - A Screaming Finish
Â
FENTON Hardy asks his sons Frank and Joe to investigate the disappearance of an eighteen-year-old girl. He suspects that she has joined a sinister religious cult called the Children of Noah.
A few days later the boys get an offbeat assignment from a New York comic book publisher. One of his characters, Apeman, is featured in a popular TV series. However, Apeman's double, a real life gigantic brute with bulging muscles, has been turning up everywhereâat private parties, in people's back-yardsâcausing considerable damage. Is this double a prankster, or is he involved in a more menacing plot?
Frank and Joe tackle both cases and uncover an intricate scheme by a clever gang of crooks. The Hardy Boys match wits with these criminals in an exciting and action-filled confrontation. 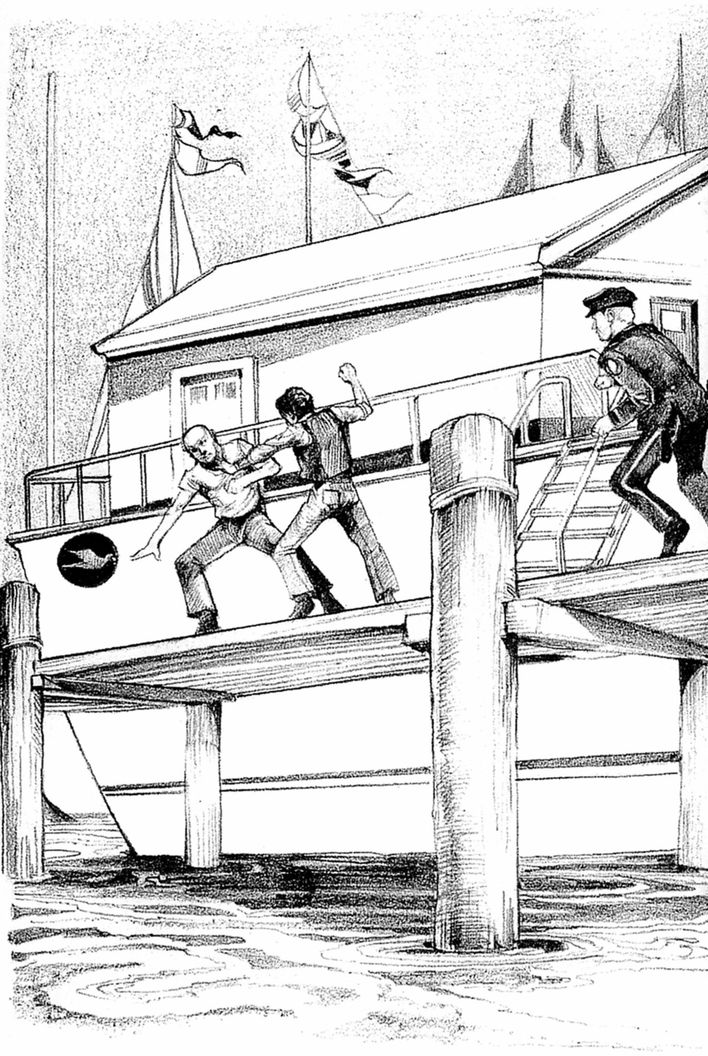 The scanning, uploading, and distribution of this book via the Internet or
via any other means without the permission of the publisher is illegal and
punishable by law. Please purchase only authorized electronic editions, and
do not participate in or encourage electronic piracy of copyrighted materials.
Your support of the author's rights is appreciated.
Â
Copyright Â© 1980 by Simon & Schuster, Inc. All rights reserved. Published in 2005 by Grosset & Dunlap, a division of Penguin Young Readers Group, 345 Hudson Street, New York, New York 10014. THE HARDY BOYSÂ® is a registered trademark of Simon & Schuster, Inc. GROSSET & DUNLAP is a trademark of Penguin Group (USA) Inc. S.A.
Â
eISBN : 978-1-101-07671-2

1
Huge Footprints
“We're in luck, Frank!” grinned blond, seventeen-year-old Joe Hardy one evening. “Both easy chairs empty and the TV set all to ourselves!”
“Great!” chuckled his brother. “Just in time to watch the Apeman go ape!”
Frank, who was dark-haired and a year older than Joe, switched on the right channel and the boys settled themselves to watch the exciting weekly “Apeman” program.
The hero of the show was a huge, muscular comic book character with a beetling brow and underslung jaw. Sole survivor of the Neanderthal race of cavemen, he was supposed to have been discovered by a scientist on a remote island and brought to America. Frank and Joe enjoyed the program, and tonight's adventure promised to be a real thriller.
Moments later, both boys looked up as they heard dull clanging sounds and a weird hooting outside.
“What on earth is that?” Joe wondered aloud.
“Can't be a foghorn. We're not that close to the water, even assuming it's foggy offshore.”
Joe, who was sitting closer to the television, turned down the volume, and the Hardys listened, mystified. The strange noises seemed to be coming from one side of the house.
“Someone must be in the driveway!” Frank exclaimed. He leaped up and flung open the window. The boys peered out. Something moved in the shadows of the shrubbery at one side of the yard. As the boys strained their eyes to make out the cause, a figure took shape in the moonlit darkness.
“Sufferin' snakes! What's that?” Joe gasped.
The figure was clad in metal and had a skull face! A round, tubular horn like a hunting horn was slung over one shoulder. Occasionally the figure would pause long enough to blow a sinister hoot. From its left wrist hung a bell, which clanged mournfully as it swung to and fro.
“Uh-oh! If I didn't think I was seeing things,” Frank muttered, “I'd say that was the Doom Demon!” 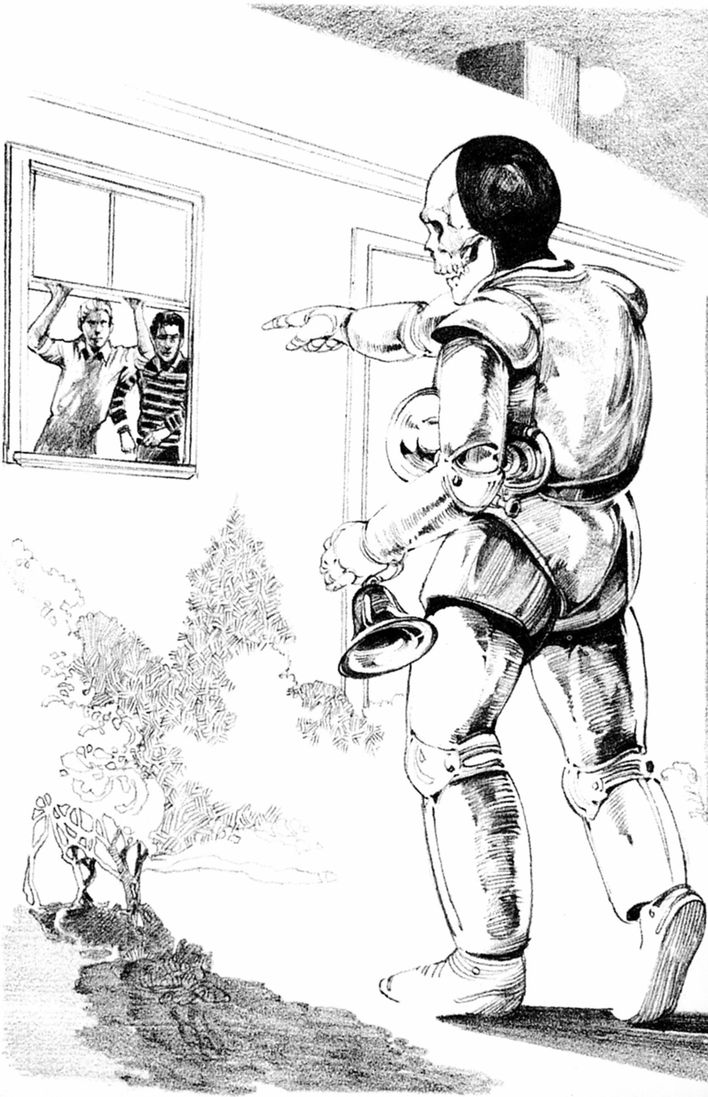 “You're right!” his brother declared.
They were referring to another character well known to comic book fans. But unlike the Apeman, the Doom Demon was a villain, who usually fought against the forces of justice led by Captain Star.
The ghastly-looking figure was coming straight toward the Hardys. Suddenly it stopped short and thrust out the fingers of both hands, as if to zap them with lightning bolts of doom!
Sparks of electricity crackled from its fingertips, and at the same moment the figure let out a yelp of pain!
“Owwwww!”
cried the Doom Demon, hopping up and down and flapping his hands loosely at the wrists as if he had just burned them on a hot stove.
“Hey! There's something familiar about that voice!” said Joe.
“Just what I'm thinking,” Frank agreed. “Let's go out and find out who's putting us on!”
“All right, all right! Calm down!” said the weird metal specter outside. “Can't you take a joke?”
The figure pulled off its skull mask, revealing the chubby-cheeked, double-chinned moonface of a youth their own age.
“Chet Morton!” Joe burst out laughing as the Hardys recognized the masquerader. “We might've known!”
“Go ahead and laugh, wise guy!” Chet retorted plaintively. I almost got my fingers fried just thenâbut you think it's funnyl“
“You want to come in for some first aid?” said Frank, “or shall we send out a stretcher?”
“Who needs first aid?” Chet sniffed. “But I might go for some cookies or a piece of your Aunt Gertrude's pie.”
“Sorry, pal. Joe and I polished it all off at dinnertime. But come on in, anyhow!”
Their stout friend waddled into the house, looking like a robot from a science fiction movie. His costume and helmet turned out to be made of cardboard covered with aluminum foil.
“What brought this on?” Joe asked, as the Hardys looked Chet over in amused astonishment.
“It's my costume for the comic book party at the Alfresco Disco tomorrow night. Don't tell me you guys have forgotten?”
“Hey, that's right!” Joe snapped his fingers and shot a glance at his brother. “We'd better get cooking on
our
costumes, Frank!”
“How do I look?” said Chet, slipping on his skull mask again and turning around proudly to show himself off from all angles. The horn on which he blew his blasts of doom was made of flexible metal conduit, with a funnel stuck in one end to serve as the bell of the horn.
“The Doom Demon, eh?” said Frank, eyeing the masquerader with a twinkle. “I'd say the measurements are a little broad, but otherwise not bad.”
“What do you mean
not bad?”
Chet complained. “It's a work of genius! I expect to win a prize with this costume!”
“What about those sparks from your fingers, when you went to zap us?” Joe put in. “What's your secret?”
“Aw, it's some battery-powered gadget I bought from a mail-order magic supply company.” Chet doffed his mask again and pulled back one sleeve of his costume to show the device strapped to his wrist. “But don't ask me how it works. The thing shocked me silly!”
“You can say that again!” Joe chuckled, causing the fat boy to flush peevishly.
“Better watch it,” Frank warned. “Instead of zapping someone, you could wind up electrocuting yourself!”
With his usual good nature, Chet Morton ended by joining in the merriment at his own expense. “Say, what show have you got on?” he added suddenly as his eyes fell on the TV set.
“âThe Apeman,”' said Joe. “It's pretty good, too. Come on, pull up a chair!”
“Thanks. I love the show.”
The three quickly clued in to the action on screen and were soon absorbed watching the program.
According to the story, the scientist who found the Apeman treated him with special drugs to make him look more human. He became so docile and attached to the scientist and his other friends that people often mistook him for an ordinary, timid, and rather backward person of no account.
But the Apeman hated cruelty of any kind. Whenever he saw crooks or villains do something nasty to a helpless victim, he would fly into a rage. This would change his body chemistry and cause him to revert to the savage state. Then, with bulging muscles and fearsome growls, he would beat up the villains and wreck their criminal plot, much to the delight of the audience. Viewers loved to watch him mop the floor with the “bad guys,” and the show had become an overnight hit.
“Uh-oh. Here it comes!” Chet muttered. “Those crooks are really asking for it!”
“And now they're going to get it!” Joe added.
On the screen, the Apeman had just taken a gun away from one crook and squeezed it into scrap metal by clenching his fist. Then he proceeded to toss the villains about like beanbags and wreck the evil masterminds' laboratory before ripping open the manacles that held their two prisoners.
“Hey! Did you hear something outside just then?” Frank murmured to his brother.
Joe shook his head. “What did it sound like?”
“More of the Apeman's growls, but I guess it was just part of the sound effects.”
The TV show ended and was followed by a brief “News Update” just before ten oâclock. First there were two or three quick headline reports about the international situation and events in Washington. Then the newscaster went on: