Read The Bishop Must Die Online 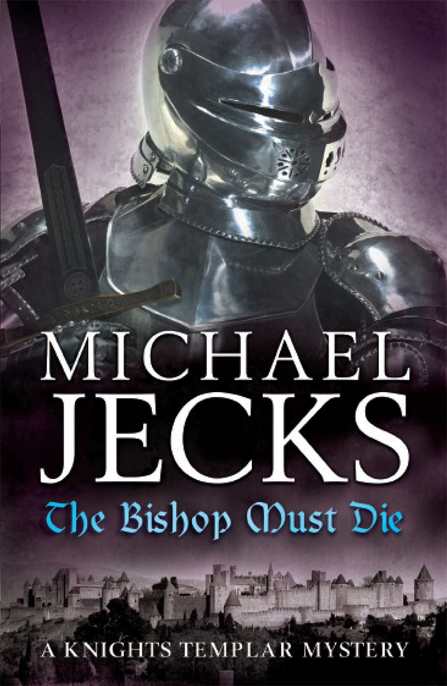 THE BISHOP MUST DIE
Michael Jecks

The right of Michael Jecks to be identified as the Author of the Work has been asserted by him in accordance with the Copyright, Designs and Patents Act 1988.

First published as an Ebook by

Michael Jecks gave up a career in the computer industry to concentrate on his writing. He is the founder of Medieval Murderers, has been Chairman of the Crime Writers’ Association, and helped create the Historical Writers’ Association. Keen to help new writers, for some years he organised the Debut Dagger competition, and is now organising the Aspara Writing festival for new writers at Evesham. He has judged many prizes, including the CWA Ian Fleming Steel Dagger. Michael is an international speaker on writing and for business. He lives with his wife, children and dogs in northern Dartmoor.

He can be followed on twitter (
@MichaelJecks
) or on
Facebook.com/Michael.Jecks.author
.

His photos of Devon and locations for his books can be found at:
Flickr.com/photos/Michael_Jecks
.

No Law in the Land

‘Michael Jecks is the master of the medieval whodunnit’ Robert Low

‘Captivating … If you care for a well-researched visit to medieval England, don’t pass this series’
Historical Novels Review

‘Great characterisation, a detailed sense of place, and a finely honed plot make this a superb medieval historical’
Library Journal

‘This fascinating portrayal of medieval life and the corruption of the Church will not disappoint. With convincing characters whose treacherous acts perfectly combine with a devilishly masterful plot, Jecks transports readers back to this wicked world with ease’
Good Book Guide

1326: King Edward II’s estranged wife Queen Isabella shames him by refusing to return from France to England. When the king hears she has betrothed their son to the daughter of the French Count of Hainault, all England fears invasion.

The King’s knights, including Sir Baldwin de Funshill, are commanded to London to protect the realm. Meanwhile Bishop Stapledon, the Treasurer of England, is under severe threat – but from whom? He has made many enemies in a long political life and Sir Baldwin and his friend, Bailiff Simon Puttock, must do all they can to find the would-be assassin before they strike …

In memory of George MacDonald Fraser, whose writing influenced me enormously, whose research spurred me to accuracy, and whose war memoirs are still the very best record of the life of a WWII British soldier.