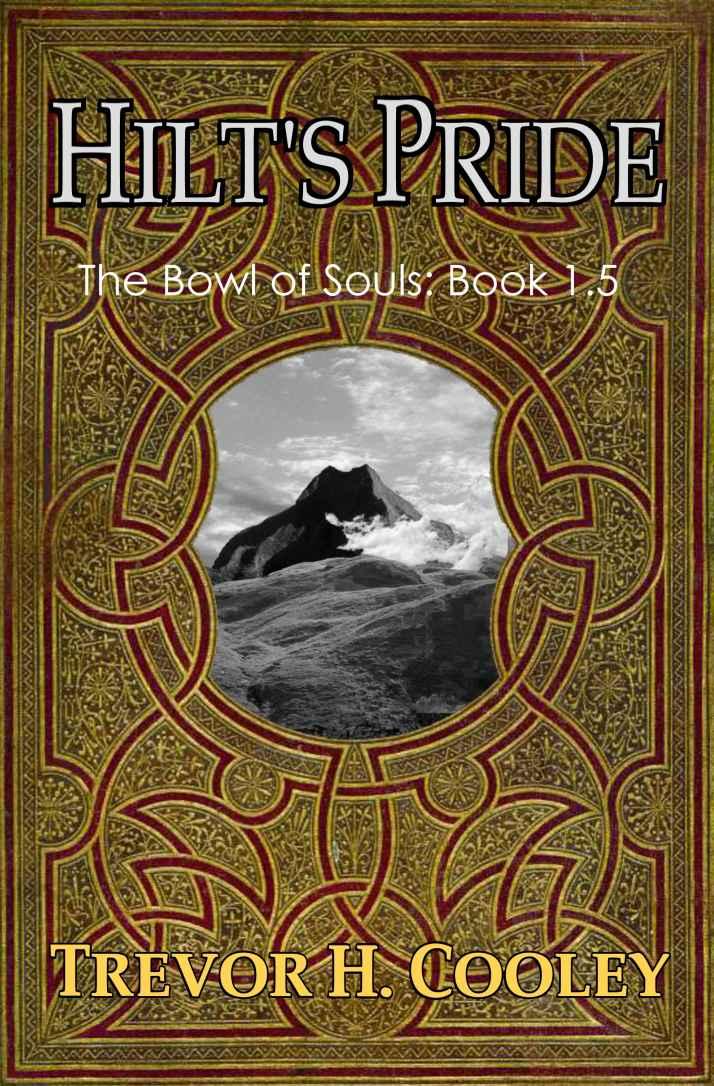 A Bowl of Souls Novella

The Bowl of Souls Series:

Book One:
of the MOONRAT

Book Three:
HUNT of the BANDHAM

The events in
Hilt’s Pride
take place just after Hilt leaves Justan at the Training School part way through Bowl of Souls: Book One. This is a stand alone story and can be read apart from or along with the rest of the series. This story contains no spoilers to the rest of the series, but contains a lot of information that enhances the backgrounds of several characters.

When I first wrote about the character of Hilt so many years ago I was interested in his character and his history. At the time I intended to bring him back into the series, but he never seemed to fit into the direction the story went. Then nearly two years ago I had the idea to write a short story called
Hilt’s Pride
and post it on my
blog
. I wrote the first two pages but never got around to finishing it.

After finishing book three of the Bowl of Souls, I knew that it would be a while until I could put out the fourth book and I wanted to put out something for my readers in the meantime. I had the idea to put together a series of short stories.
Hilt’s Pride
was the first one that came to mind.

I had a vague outline in my head and figured the story would end up being around twenty to thirty pages. But as I started to write, the characters grew. I loved their interaction and humor and the tale of their journey grew in scope. I started telling people it would be sixty pages and before I knew it, I had realized it was going to be the size of a large novella.

I am very happy with the result and eager to share these characters with you. Please come to the Bowl of Souls
Facebook
page or message me on Twitter and tell me what you think. I hope you love the story as much as I do. Now to get back to work on book four . . .

The girl with the golden hair had come to die. It was the only answer that made sense. Hilt glanced back at the woman as the
gorc's
head hit the ground with a splash of dark blood.

She stood as if unafraid of the goblinoids that attacked. Her hair gleamed golden in the morning sunlight. Her eyes were fixed on him in curiosity, not in hope of rescue as he would expect.

Hilt stepped back from the dead creature as the next
gorc
attacked. He knocked aside its rusty iron blade.
Stupid thing.
It had to know it was outmatched. He had killed five of its comrades already. Hilt swept the tip of his left sword across its face, taking out an eye. It stumbled back with a howl, clutching at the wound. Hilt glared at the others, giving his swords a menacing twirl.

The two remaining gorcs grabbed their wounded comrade and retreated around a large nearby boulder, sending angry curses back at Hilt all the way. The fight seemed to be over, but Hilt knew that there were more gorcs nearby watching from the rocks.

Gorcs were little more than a nuisance to a trained warrior. They were a shade smaller than humans, larger and smarter than a lowly goblin, but smaller and stupider than an orc. Gorcs were in fact born from goblins, but gorcs despised their smaller brethren and formed tribes of their own.

Hilt didn't care where the creatures came from. They were mere rabble, unfit to stain his blade. He wouldn't have bothered if not for the girl.

He had first seen her earlier that morning climbing the steep incline of the mountainside alone. She had looked frail and vulnerable winding her way around the enormous boulders that littered the slope. Hilt had seen signs that the area was full of monsters and followed, intending to tell her to turn back. By the time he arrived, the gorcs had surrounded her.

Now that the immediate danger was over, Hilt turned to speak with her. But she was no longer standing there. The woman had turned back to the task of climbing the mountainside.

"Wait!
Young lady!"
Hilt caught up to her in moments. "Young lady, where are you going?"

She turned around and Hilt saw her up close for the first time. Now that she was out of the sunlight, her hair no longer gleamed golden. It was more of a dirtied blond. Her face was attractive, but weary. Her skin was tanned and wrinkled around piercing blue eyes. Her dress was long sleeved and woolen and quite dirty. This was a woman who spent most of her time outdoors, perhaps working the fields.

"I am surely no younger than you, swordsman." She turned back to climbing the steep slope. "Now leave me be. There are plenty more monsters for you to slay."

Hilt stared after her, blinking in disbelief. “Madam, I . . . I was not here to slay monsters. I was on a pressing mission when I saw the beasts surround you. I only followed you up here to keep you from getting killed!”

“Well you succeeded then. I am not dead.” she said, not looking back. “Now, if you’ll excuse me, I have my own ‘important duty’ to perform.”

He followed her up the slope a few moments more. “You truly aren’t going to thank me?”

“I never asked for your help, did I?” She took a few more labored strides up the mountainside, then paused and whirled around, her lips twisted into a scowl. “Just what were you expecting in thanks?”

“Expecting?” Hilt folded his arms across his chest. What an insolent woman. “When a man saves your life, isn’t thanks customary?”

“Oh! So you followed me up here seeking a reward?
Hmph
, you sound like nobility.” She eyed his clothing with suspicion. His garb was finely made but well worn and adjusted for easy movement. He wore leather boots, calf high with woolen breeches, and a white shirt covered by a
chainmail
vest and a fine overcoat. Sword sheathes hung at either hip and he had a small pack slung over his shoulders. “What did you want, a maiden’s kiss of gratitude? Well I ain’t
no
maiden!”

Hilt’s face wrinkled in confusion. “Madam I most definitely did not come seeking a kiss.”

She misunderstood the look on his face and gasped, one hand
raising
to her mouth.
“A kiss not good enough?
You see me, a baseborn woman all alone and think to take advantage? I think not. I may not be a maiden, but I’m not street trash! Go look for your ‘thanks’ elsewhere. I’ll take my chances with the monsters!”

Hilt’s face went red and he sputtered in outrage as she turned and resumed her climb. “Foul!” he cried finally.

She snorted and resumed her climb.

“That was a most- . . .” he strode quickly up the steep slope and passed the woman before turning to face her. “That was a most foul accusation! I climb up here out of my way to save your life and I am rewarded with scowls and disparaging remarks?”

“There you are expecting rewards again,” she accused, taking a step backward. Her foot caught in her dress and she stumbled. She would have taken a tumble down the slope if Hilt had not reached out and grasped her arm. She struggled and slapped his arm as he pulled her to her feet. “Unhand me!”

Hilt made sure she had regained her footing before letting go, then raised both hands and took a step back. “I am sorry for my choice of words. I seek no reward.
Truly.
I just expected common courtesy is all.”

Her blue-eyed glare softened only slightly. “Alright then, you have your thanks. Now will you step aside, so I can get where I’m going?”

“I will not,” Hilt said, arms folded, his voice firm.

Her fists clenched, but she forced a smile on her face. “Why thank you, kind sir. It was a privilege to be saved by a warrior such as yourself. There, is that better?”

Even though it was forced, Hilt had to admit her smile was pretty. He shrugged.
“A bit better, yes.”

“Then move it,” she said, the smile still frozen on her face. She took a step forward, but Hilt did not move.

If I Were You by Lisa Renee Jones
The Lost Testament by James Becker
Wildewood Revenge by B.A. Morton
Trust (Trojans MC Book 6) by Sam Crescent
The Heart Has Its Reasons by Maria Duenas
Trueish Crime: A Kat Makris Greek Mafia Novel by Alex A. King
The Gift of Story by Clarissa Pinkola Estés
The Water Room by Christopher Fowler
Snowfall on Haven Point by RaeAnne Thayne
Daughter of Time 1: Reader by Erec Stebbins
Our partner