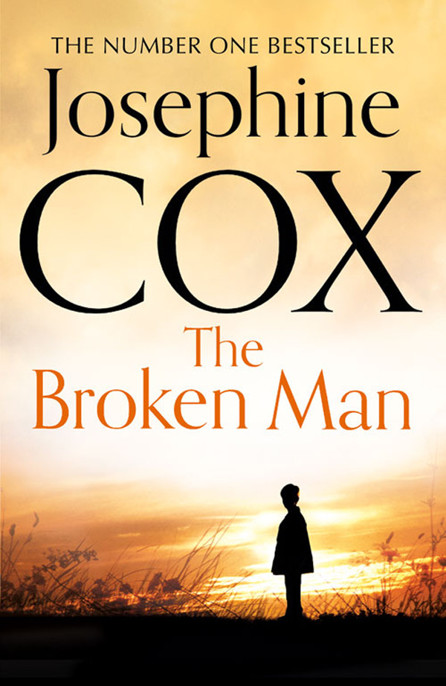 To my darling Ken, as always.

To the musical Murphy family in
Ireland. Hope all is well with you. Much love, Jo x

Behind the scenes of
The Broken Man
with Josephine Cox

A short story by Josephine Cox

T
HERE WAS SOMETHING
disturbing about young Adam.

Deep inside, he carried a secret that he could never tell anyone.

Phil knew, though, because he recognised that certain look: the slump of the shoulders; the sad eyes that gave little away.

Having fought for king and country, Phil knew what it was like to carry a secret. Over the years he had learned to live with the vivid memory of terrible scenes he had witnessed.

He could banter with old companions, but the loneliness of guarding his secret was often unbearable.

Though his life was not empty, he ached for the company of a very special person, the one lovely woman he had loved with every fibre of his being. The only woman who was able to bring sunshine into his life, even on a rainy day.

He kept himself busy helping his neighbours and occasionally meeting up with locals down at the pub. He earned his living by driving the school bus, and when the working day was over, he would go home to an empty house, make his tea and, afterwards, sit in his chair and light up his faithful old pipe. Before it got dark, he would take a leisurely stroll through the countryside, his little mongrel dog, Rex, tripping along beside him.

Phil appreciated his few simple pleasures, though he would have given everything to turn the clock back to a time when he was younger and fitter, and fortunate enough to have a loving wife.

Now, though, he would make his way home as always, and except for the faithful little dog who was never far from his side, the house would be empty.

Now at night, he went up to his bed; alone. At first light he woke up; alone. He had no one special to laugh or cry with, no one to slide his arm around when he felt loving. And there was no one close with whom to share any titbits of gossip or maybe a smile at the occasional naughty tricks the schoolchildren got up to on the bus.

There was no one to chastise him when he left the tap running, or when he casually threw his worn shirt on the bedroom floor. It was a hard truth that after many happy years married to a wonderful woman, he was now a man on his own, with only memories and his dog for company.

The loneliness weighed heaviest on him in the evenings. He longed for things once familiar, like making a pot of tea for two, and sharing it over a cheery fire, or maybe cutting fresh flowers from his little garden, and seeing his wife’s pretty smile as he handed them to her.

Those precious times had been dearly missed these past four years, since his beloved wife lost her fight against a long illness.

Phil’s thoughts were suddenly interrupted by a flicker of movement reflected in the driver’s mirror. Glancing up, he saw his last passenger, young Adam Carter, climbing out of his seat to make his way down the bus. He was far too quiet and serious for his age. There were times when Phil had caught the boy so deep in thought he was oblivious to the other children around him and he had no particular friend with whom he always sat. In Adam, Phil saw a troubled, frightened boy.

Phil manoeuvred the vehicle over to the verge, where he parked, applied the handbrake, and prepared to let the boy off.

‘Right then, Adam, here you are, home safe and well.’

‘The name’s Phil …’ he kindly corrected the child. ‘Everyone calls me Phil.’

‘But my father says it’s rude to address your elders by their first name.’

‘Mebbe, but not if they offer you the privilege … which I am very glad to be doing right now. Only if you feel comfortable with it, mind.’

Adam grew restless. ‘I’d really like to call you Phil,’ he admitted, ‘but my father would be angry with me.’

Phil gave a cheeky wink. ‘Well, that’s easily settled. I won’t tell him if you don’t.’

Adam gave it a little thought, then with a wide smile said, ‘OK. I won’t tell him either.’

‘Good! That’s settled then.’ Phil climbed out of the driving seat. ‘Seeing as I need to stretch my legs and it’s such a beautiful afternoon, I’ll walk you down the lane to your front door. That’s if you think your father wouldn’t mind.’

Adam shook his head. ‘He won’t mind. Thank you, Phil.’

Phil laughed out loud. ‘There you are. It wasn’t too difficult to say my name, was it?’

He felt as though, at long last, this lonely boy was beginning to trust him. He hoped the day might come when the child would trust him enough to confide in him.

He now took a sideways glance at young Adam.

At seven years of age, Adam Carter was quietly spoken. With serious brown eyes, and thick dark hair that tumbled over his forehead, he cut a handsome young figure. Not naturally outgoing, he hardly ever laughed out loud, and smiled only on rare occasions. Yet when he did smile it was such a warm, genuine smile, it could light up a room.

Phil had noticed how Adam’s nervousness increased the nearer he got to home. Unlike the other children, who could never get off the bus fast enough, Adam hung back, waiting until the very last minute, almost as though he was reluctant to leave the safety of the bus.

‘Right then, son, that’s another week over. You go on; I need to secure the bus, especially after that young squirrel got inside and wreaked havoc.’

Adam went down the steps. On the last step he gave a short jump to the ground, his satchel catching on the hand-rail as he did so.

‘All right, are you?’ Phil released his satchel.

After following Adam down the bus steps, Phil secured the door behind him.

Except for a curt nod of the head, Adam gave no reply, but he wanted to tell this gentle, kind man that no, he was
not
all right; that he was
not
glad to be home. He wanted to confess that he was afraid and unhappy, and that he often dreamed of running away. But he would never do that, because it might be dangerous for someone he loved dearly. So he kept his silence and went on pretending. Even now, as they approached the house, his heart was thumping. Was his father home yet? Had his day been good? Because if not … oh … if not … Quickly, he thrust the bad thoughts from his mind.

Man and boy went down the lane side by side.

‘By! This is a real treat.’ Phil sniffed the air. ‘This time o’ day, the pine trees give off a wonderful scent.’

Adam agreed. ‘Mum says it’s even stronger in the summer. She says when the trees begin to sweat, they create a thick vapour over the woods, and you can almost taste it.’

Phil loved the lazy manner in which the worn path wound in and out of the ancient woodlands, skirting magnificent trees that had been there far longer than he had.

‘You live in a really pretty part of the countryside,’ he told Adam. ‘And now you’ve got the whole weekend before you, so what might you be up to, eh?’ He chuckled. ‘By! I wish I were a lad again … climbing trees and apple-scrumping. The things we used to get up to, you would not believe.’ He gave a great sigh. ‘It’s all a lifetime ago now. Mind you, I’d never be able to climb a tree these days, not with my gammy leg.’ His pronounced limp was a painful trophy from the war.

‘I’m not allowed to climb trees.’ Adam’s voice softened with regret. ‘My father doesn’t approve of it.’

‘Well, I never!’ Phil was dumbfounded. ‘Climbing trees is what boys do. It’s a natural part of growing up, like fishing, and football.’ He gave a wistful smile. ‘And who could ever forget the first time he kissed a girl?’ He rolled his eyes and made the boy smile shyly; he still had that pleasure to come.

‘I know it’s not my place to ask,’ Phil went on in a more serious tone, ‘but, what’s your dad got against you climbing trees?’

Deep in conversation, they were startled and delighted when a deer shot across their path. A few steps on, and Phil resumed their conversation.

‘I don’t expect I ever will have loads of money, but if I did, I’d build myself the prettiest little cottage right in the middle of these ’ere woods. And I’d be sure to make friends with every animal that lived here.’

Adam laughed. ‘You’d be like the old man in the story.’

‘It’s a mystery I once read, about a man who lived in an old shed in the woods. He cut his own logs for the fire, and everything he ate came out of the woods. Sometimes he would even sleep in the forest with the animals, and they never once hurt him.’

The Tin Man by Nina Mason
Seeing (Return of the Nine) by Grace, Viola
A Sea of Purple Ink by Rebekah Shafer
Terms of Enlistment 01.1: Lucky Thirteen by Marko Kloos
Hannah Jayne by Under Suspicion
Search And Seizure (Romps #2) by Rivera, Roxie
Linked by Barbara Huffert
Life With Toddlers by Michelle Smith Ms Slp, Dr. Rita Chandler
Daughters of the Samurai: A Journey From East to West and Back by Janice P. Nimura
Attack on Area 51 by Mack Maloney
Our partner