Read The Case of the Fire Alarm Online

The Case of the Fire Alarm (6 page)

I just thought of one more thing I know about Jillian:

When everyone was outside after the alarm went off, she told her friend, “No one saw me.”

No one saw her do what? I wonder.
Pull the fire alarm?

No! She had to have been talking about something else.

I think Michael pulled the alarm. But I don’t have proof of that, either.

Hey, Michael lives at Mouse’s house. Maybe if I go over to Mouse’s house, I could
find
proof that Michael pulled the alarm. Maybe Mouse will even help me find proof.

I carefully step over Connor and jump down from the bed. Connor rolls over, but doesn’t wake up. Out in the hallway, I pause to listen at Mom’s door. I hear snoring. Good! I continue down the stairs, through the kitchen, and out the doggy door.

There
used to be
a secret tunnel that went from my yard, under the fence, and into the Deerbergs’ yard. But Mom and Connor found the tunnel and filled it in.

I guess I could dig a new tunnel.

I pick a different spot along the fence. I hope this place is better hidden. And I start digging.

“I THOUGHT YOU WERE COMING OVER
NOW
,” Mouse says after a little while.

Unfortunately, there’s another fence between the Deerbergs’ yard and Mouse’s yard. But it’s shorter than my fence. Maybe I can climb over it. I take a running jump. I am up ... and over!

“THERE YOU ARE!” Mouse says as we greet each other the dog-fashioned way. “WHAT WAS SO IMPORTANT THAT YOU HAD TO COME OVER?”

I tell Mouse about the fire alarm and who I think pulled it.

He growls at me.

“I DON’T LIKE YOU TALKING BAD ABOUT MY BOY.”

“Well, Michael has pulled a fire alarm before,” I tell Mouse. In fact, I tell Mouse everything I know about Michael, Jillian, and Zack.

“NONE OF THAT MEANS
MICHAEL
PULLED THE ALARM!” Mouse says.

“Well,” I say. “I don’t think Jillian did it. And Zack is too short. Who else could have done it?”

“SOMEBODY WHO IS NOT MICHAEL!!!” Mouse says. This time he’s showing teeth.

Maybe I should just go home. Mouse isn’t going to help me find proof that Michael pulled the alarm. And I don’t want to get into a fight with him.

I start toward the fence. But a shuffling in the pile of firewood at the back of Mouse’s yard stops me in my tracks. A single log shifts and falls onto the lawn.

I freeze.
Someone is back there.

“Hello?” I say, peering into the darkness. But I don’t see anyone.

Mouse comes to stand beside me. “WHO’S THERE?” he barks. “SHOW YOURSELF!”

A shadowy figure with pointy ears slo-o-w-l-y climbs to the top of the woodpile.

It’s Cat with No Name! “What makes you dogs so sure a
human
pulled that alarm at the school?” Cat asks.

Mouse and I look at each other. What is that cat talking about?

Cat with No Name looks at me like I’m an idiot. “No!” he says, blinking his eyes.

“Well, what other nonhuman could have pulled it?” I ask.

“Duh! How about the
ghost
of Four Lakes Elementary?” Cat says.

“THERE’S NO SUCH THING AS GHOSTS,” Mouse says. “IS THERE, BUDDY?”

“Of course not,” I say. How dumb does Cat think Mouse and I are?

“Just because you dogs can’t
see
ghosts doesn’t mean they’re not there,” Cat says. “
I
see ghosts all the time. I’ve even seen the ghost at that school.” With that, Cat leaps into the Deerbergs’ yard and scampers away. 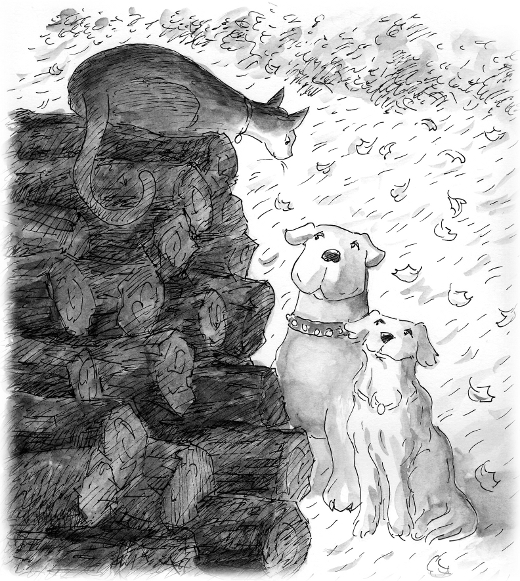 “DO YOU THINK HE’S TELLING THE TRUTH?” Mouse asks me. “COULD THERE BE GHOSTS? DO YOU THINK CATS CAN SEE GHOSTS?”

A dog can tell when a human is lying, but with cats you never know.

Cats are into some pretty weird things. It’s
possible
they see ghosts.

It’s also possible Cat with No Name made the whole thing up.

7
It’s Hard to Talk to Humans

I need to talk to Jillian. I need to find a way to ask her what she was doing in the art room. And I need to make her understand what I’m asking so she can answer me.

I don’t think a ghost pulled the fire alarm. Even if there are such things as ghosts, how would a ghost do it?

And I still don’t think Jillian did it, either. If I can prove she didn’t, maybe Mouse will agree that it’s
possible
Michael did it. Then maybe he’ll help me prove it.

But how am I going to talk to Jillian? I could probably find her if I went looking for her, but I’m not supposed to wander around the school by myself. I’m supposed to stay here in Mom’s office and be a Good Dog.

Well ... I don’t think Mom would mind if I sat up and looked out the window. I see kids playing outside right now, but they are all younger than Jillian.

Hey, maybe Jillian will come outside in a little bit. When she does, maybe Mom will let me go out and talk to her.

I sit. And I watch as one group of kids comes inside and another, older group, goes outside.

There’s Jillian!
Over by the swings.

Mom looks up from her computer. “Do you need to go outside, Buddy?”

Mom snaps my leash to my collar, then takes me outside.

I see Jillian playing by the swings.

“This way,” I say, pulling Mom toward Jillian.

“He can if someone will bring him in after recess,” Mom says.

I zoom past all those other kids.

“Hey, Jillian,” I say, skidding to a stop in front of her.

“Hi, Buddy,” she says. She reaches out to scratch my ears, and I move closer so she can reach. She’s really good at scratching ears.

“So, Jillian,” I say, “Remember when the fire alarm went off? You were outside talking to one of your friends. You said ‘no one saw me.’ What did you mean by that? What did you do that no one saw?” 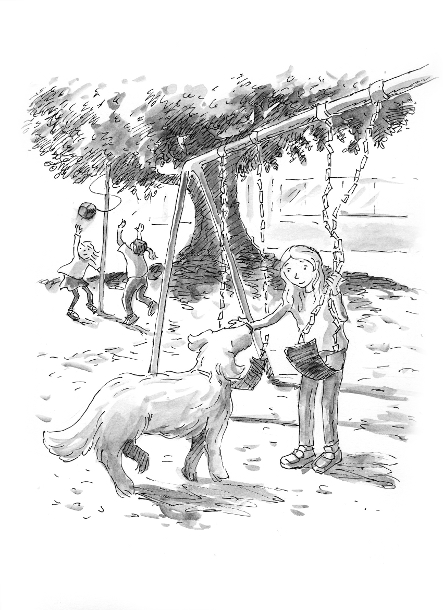 Chase? I LOVE chase. It’s my favorite—NO! I don’t want to play chase. “I want you to tell me what you were doing that no one saw. I know you were lying when you told Mom you weren’t in the art room. Why did you lie about that?”

“Come on, Buddy.” Jillian claps her hands. “Let’s go.” She runs away from me.

Jillian giggles as she glances back at me, then runs even faster.

But I’m faster than she is. I run in front of her to get her to stop, but she keeps changing direction.

I can’t tell if she’s doing this on purpose or if she really doesn’t understand what I’m saying to her. I know it’s hard for humans to understand us, but most of the time if they’d only try—

A bell rings then, and all the kids run toward the school.

“See you later, Buddy,” Jillian says with a wave.

I just stand there with my tail hanging heavy. I am no closer to finding out what Jillian was doing when the fire alarm went off than I was before.

“It’s frustrating, isn’t it?” says a voice behind me.

“Sure is,” I say, making my way toward the fence.

“I was trying to tell my humans about some strange things I saw last night, but they thought I wanted to go outside,” Jazzy says.

“I saw lights turning on and off in the school,” Jazzy says. “Then I saw a girl’s face in one of the windows. Except I don’t think it was a real girl. I think it was a
ghost
girl.”

I wasn’t sure I believed Cat with No Name when he said he’s seen a ghost at this school. But I have to believe Jazzy when she says it because dogs don’t lie.

Is it possible that Cat with No Name was telling the truth? Could there be a ghost in the school? Could that ghost have pulled the fire alarm?

“Buddy, come!” Connor calls from across the playground. He is holding my leash.

I look around. Connor and I are the only ones left on the playground.

“I have to go,” I tell Jazzy. Then I turn tail and run to Connor.

“Good boy,” he says, clipping my leash to my collar.

Connor seems like a smart human even though he’s not full grown yet. “Do you really believe in ghosts, Connor?” I ask as we walk up the stairs. “Do you think there’s a ghost in this school?”

Connor just hums a little tune as though I never said a word.

I don’t
think
I smell any ghosts in this hallway. But I don’t know what ghosts smell like. Do they even have a scent?

If there is a ghost in this school, there should be clues of some sort. If I can’t smell it, I should be able to see it. Or hear it.

“Nothing,” I say. We continue down the hall, all the way to the office.

Connor unclips my leash and I dash into Mom’s office. Hey, Jillian is here, too!

“What are you doing here?” I ask. I go over to her and she pets me.

“Thanks for bringing Buddy in, Connor,” Mom says. She motions for Connor to close the door on his way out, then turns back to Jillian.

“I don’t know,” Mom says. She has a very serious look on her face. “I have to know why you were in the art room before I can promise I won’t tell anyone that you were there.”

Jillian shifts in her seat. “Okay,” she says. “Yesterday was Mrs. Sobol’s birthday. Kaity and I decided to give her this pot we made together in our Saturday art class. But we didn’t want her or anyone else to know it was from us. We wrote a note that said the pot was from a secret admirer.”

“And you snuck it into the art room when you were supposed to be going to the bathroom?” Mom asks.