Read The Case of the Swirling Killer Tornado Online

The Case of the Swirling Killer Tornado 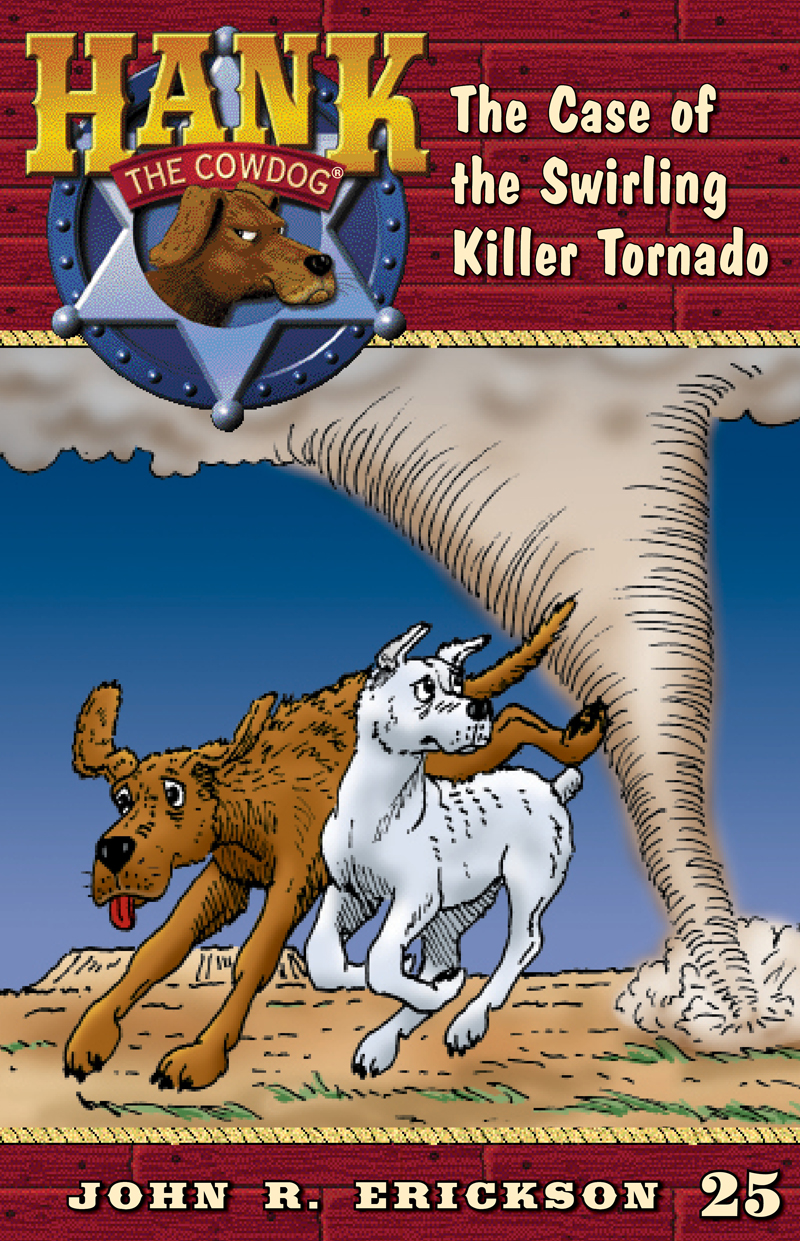 The Case of the Swirling Killer Tornado 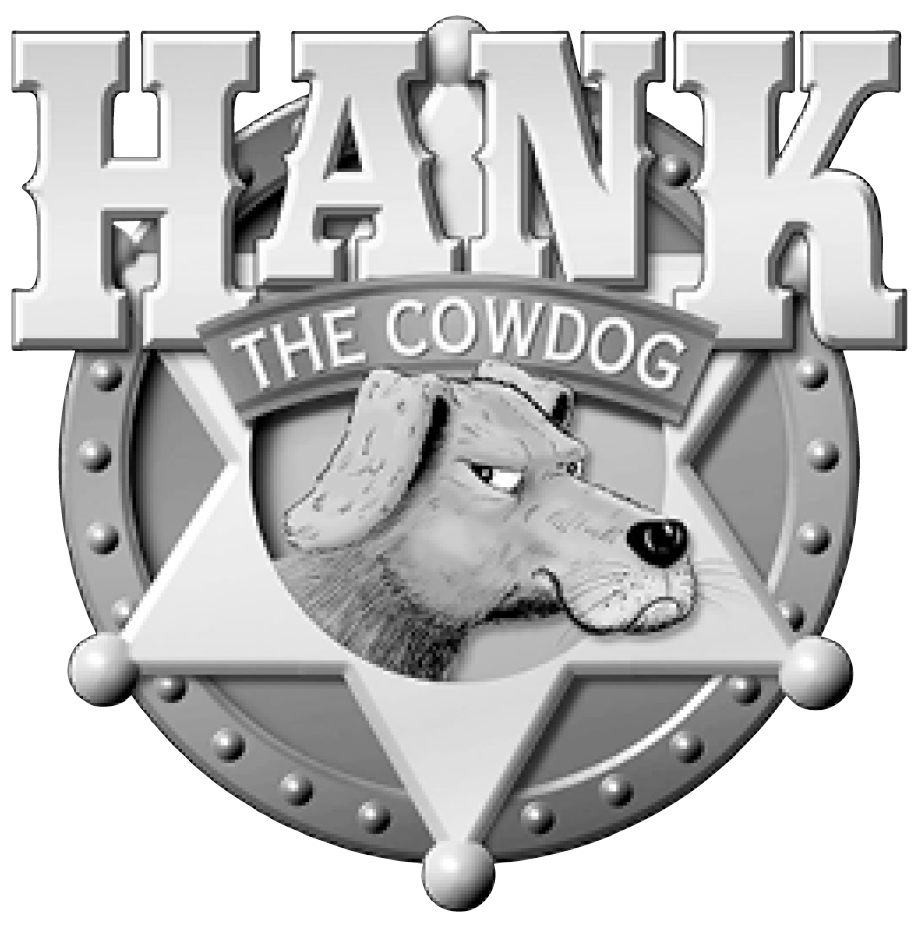 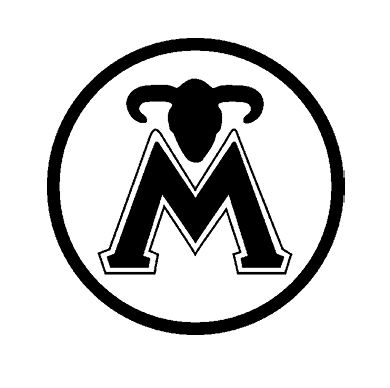 First published in the United States of America by Gulf Publishing Company, 1995.

Hank the CowdogÂ® is a registered trademark of John R. Erickson.

For Trev Tevis, whose heroic struggle against pain has not diminished the beauty of his music.

Chapter One
A Tempest in a Teabag

Chapter Seven
Inside the Coverous Cavern

Chapter Nine
We Hear the Roar of the Hurricane

Chapter Ten
Okay, Maybe It Was a Tornado

Chapter One: A Tempest in a Teabag 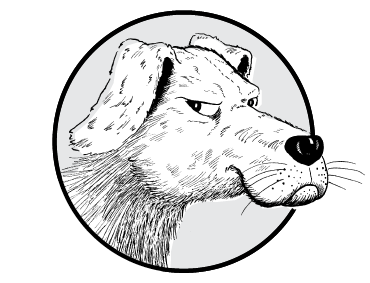 I
t's me again, Hank the Cowdog. It was June, as I recall, the middle of June. I was under the gas tanks, sleeping on my gunnysack bed.

Or resting my eyes, would be closer to the truth. See, it was almost midnight and I am never asleep at that hour. Never. The Head of Ranch Security is always wide awake, alert, and on night patrol during the deep, dark hours of the night.

I was resting mine eyes. Drover, on the other hand, was totally knocked out: snoring, grunting, wheezing, jerking, twitching, fluttering his eyelids, squeaking, and doing all the other things he does in his sleep.

He was starting to get on my nerves. I cracked one eyelid and addressed him in a firm term of voice: “Droving, must you snork all that gutter-snipe? Plumber's friend porkchop and horrifying bananas.”

I couldn't help chuckling at that. I mean, to who or whom did he think he was speaking? “Whittle wheelbarrowing fodder-fiddle's whicker-bill.” 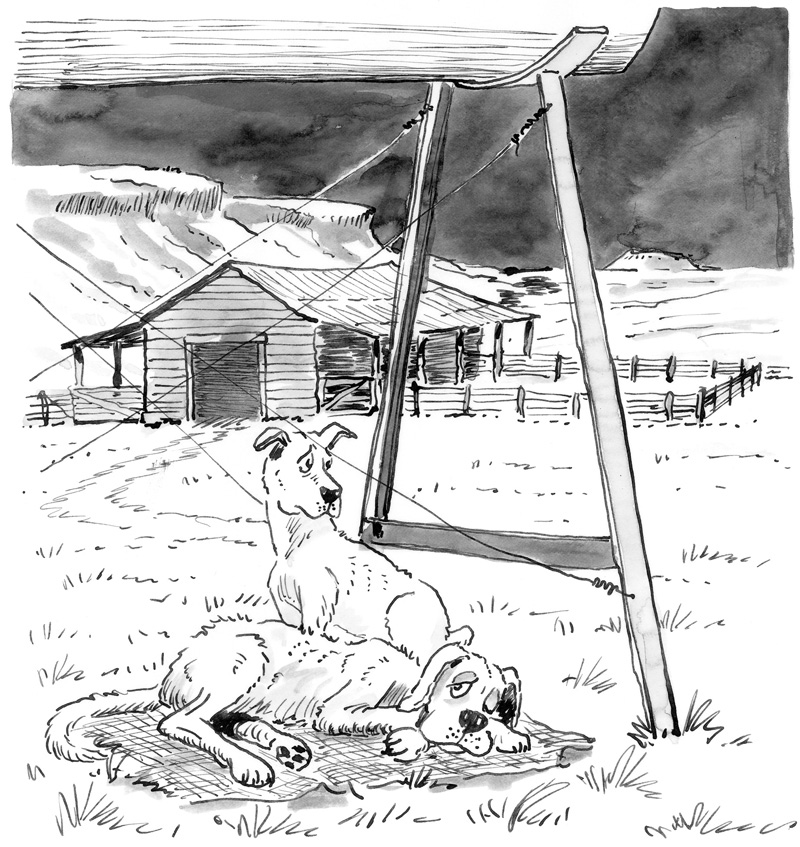 “Tell your spaghetti leaves to double-clutch the peanut butter.”

All at once it occurred to me that this conversation was going nowhere. Drover was making very little sense and I was a busy dog. I didn't have time to listen to his foolishness.

I cracked my other eyelid and beamed him a look of purest steel. “Drover, if you're going to talk to me, the least you can do is snork mirk the posthole diggers.”

His head came up. His eyes drifted open and moved around in, little circles. “Who ate the trees?”

“I can't answer that. The point is . . .” I blinked my eyes several times and slowly Drover's face came into focus. Perhaps I had been asleeper than I thought. “The point is that I don't know what you're talking about.”

“Oh. Then what about the spare tire?”

“I still don't know what you're talking about.”

He gave his head a shake, stood up, and walked around in a circle. “Gosh, I don't know what I've been talking about either.”

“There, you see? Exactly my point. You've been talking nonsense, which makes me think, Drover, that you've been asleep. Is it possible that you're still asleep, even though we're in the most dangerous part of the night?”

“Today is today, Drover, the very day in which we are living and breathing.

“Oh. Well, if it's already today, there's no need for us to wait around for it. We might as well take a little nap.”

I thought about that for a moment. “Good point. A little nap sometimes does wonders.”

“Exactly. Studies show that dogs who take naps are more likely to snork and murgle than scrambled tumbleweeds.”

My eyes drifted shut. My breathing fell into a deep and regular pattern. It was very quiet and peaceful. Then . . .

“No thanks, I couldn't hold another bite.”

“'Cause I'm not. All at once I'm wide awake. Did you hear that sound?”

“I heard it. I heard it with my own ears. Hank, are you asleep?”

“Hank, you'd better wake up. I just heard a sound and I'm getting scared and my leg hurts.”

Perhaps I had dozed, but not deeply and not for long. I tried to bring Drover's face into focus. “Did you just say that your leg heard a sound?”

“No, I said that my leg hurts but my ears heard a sound.”

“Well, I think we're under the gas tanks, and I think you woke up for a minute and fell asleep again.”

“Yeah, but it's the middle of the night.”

“Exactly. That's what I mean. No problem.” I pushed myself up on all fours and shook the vapors out of my head. “Where did you say we were?”

“Yes, of course. Good. We're right on schedule. I had scheduled a meeting here under the, uh, gas tanks. Do you know the purpose of this meeting?”

“I wrote a song. In my sleep. While I was asleep, I thought of this song, just kind of dreamed it up out of nowhere.”

I stared at the runt. “You wrote a song in your sleep? That sounds crazy, Drover. In the first place, you don't even sing. I mean, dogs who don't sing don't write songs.”

“Oh brother. In the middle of the night, you're composing a song about tornadoes?”

“Yeah, you want to hear it? I'd better do it pretty quick or I'll forget it.”

“And that would be a tragedy, I suppose.”

“Yeah, 'cause I never wrote a song before.”

“You already said that.”

“Just sing the song, Drover, and let's get on to something else.”

Never ever bark at a funnel-shaped cloud

If it's spinning in a circle and roaring real loud.

See, it could be a monster or a goblin or a spook

Or something else entirely worse that mightn't turn you loose.

For barking at a thing that's bigger than a moose.

If you bark up a storm, then one might appear,

You'll get an education, and knocked on your rear.

Spin you in a circle and circle all around,

You'll fly through the air and skid across the ground.

You'll lose a lot of sleep and hair by the pound.

There's quite a bit of difference 'tween a storm and a frog.

A storm doesn't have much fear of a dog.

Here's the moral to the story of the funnel-shaped cloud

That's spinning in a circle and roaring real loud.

If you bite a big tornado it'll probably give you hiccups

So take this piece of good advice: go back to barkin' pickups.

He finished the song and sat there, grinning and waiting for me to say something. “What do you think? Tell me the truth.”

“Yeah, but do you like it? I thought it had a pretty deep message: stay away from tornadoes. I guess you could say that it promotes tornado safety.”

I rose from my gunnysack bed and took a big stretch. It appeared that my rest time was over. I began pacing in front of Young Beethoven. My mind works better when I pace, don't you see.

“Okay, Drover, you asked for my opinion and I'll give it. Number One, the song wasn't as silly as I had expected. But, Number Two, it was silly enough. Because, Number Three, we have never had a tornado on this ranch. Hence, Number Four, what you have createdâif you actually wrote itâwhat you have there is a tempest in a teabag.”

He gave me his patented blank stare. “What does that mean?”

“It means, Drover, that you've written a song without a deep underlying purpose.” Suddenly I stopped pacing and whirled around to face him. “If we don't have tornadoes, Drover, we don't need a song that promotes tornado safety.”

“Gee, I never thought of that.”

I gave the little mutt a pat on the back. “But you tried, Drover, that's the important thing. There's an old saying that fits this situation: âBetter to try and do something really stupid than not to try at all.'”

I lifted my eyes to the sky above and studied the weather patterns and so forth. “Drover, I see stars.”

“Let me finish. Stars twinkle but they have never been known to produce thunder.”

“Hence, it follows from simple logic that . . .” KA-BOOM! “. . . yikes, that we're being attacked by an enormous thunderstorm . . . holy smokes, look at the lightning in that cloud!” 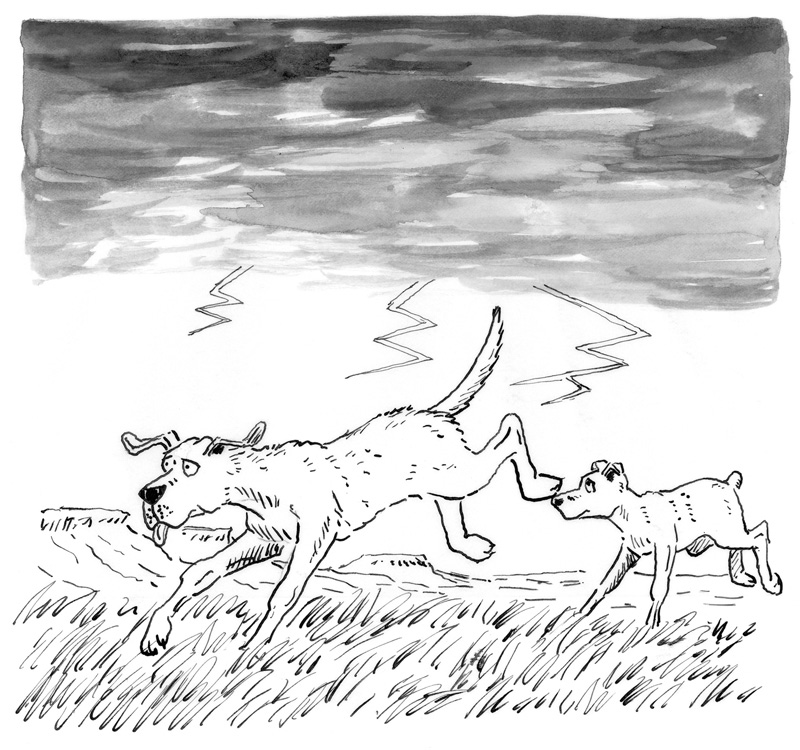 “Battle Stations, Drover, and prepare to defend the ranch!”

And with that, we went streaking up the caliche hill behind the house and prepared to do battle with one of the most dangerous enormous storms I'd encountered in my whole career.

And what made it even worse was that I hadn't slept a wink in days. No kidding.