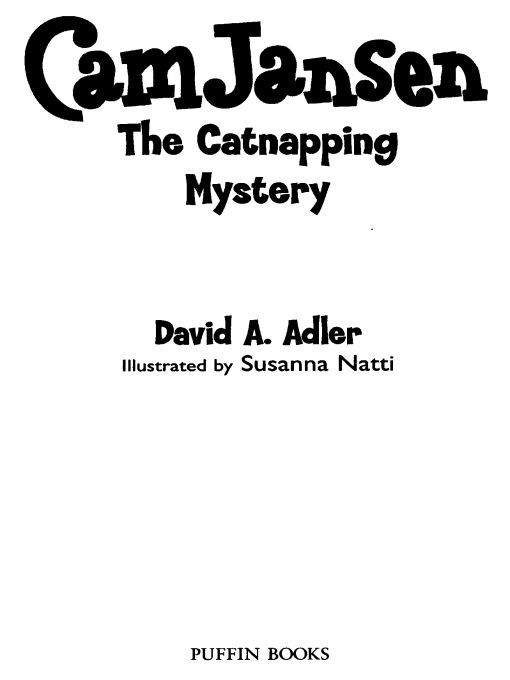 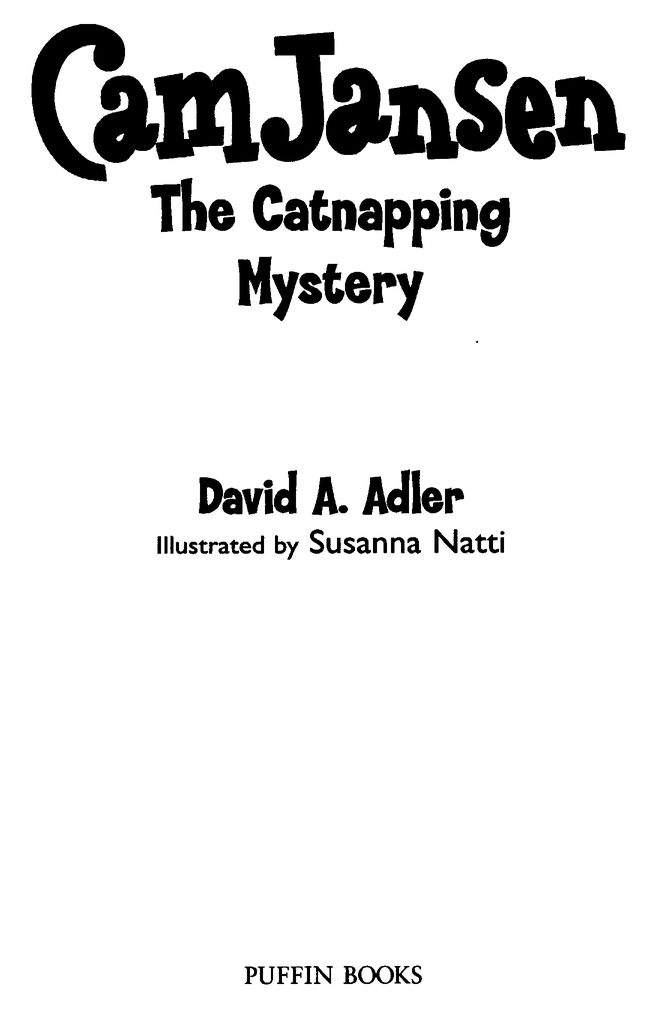 For my great-nieces
Rivka and Devorah 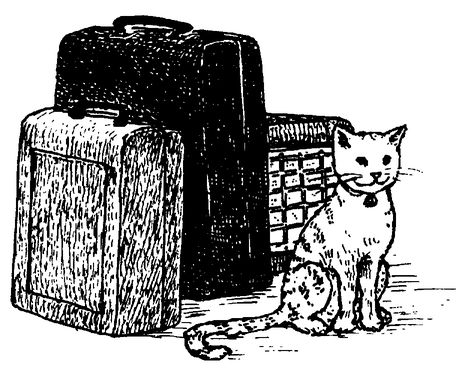 Chapter One
“Y
uma,” Cam Jansen said. “It’s a city in Arizona.”
“Yuma ends with an
a,”
Cam’s friend Eric Shelton said. “Now I have to name a place that begins with an
a.”
Cam and Eric were walking through a busy city street with Cam’s parents. They were on their way to meet Cam’s Aunt Molly. While they walked, Cam and Eric were playing Geography.
“Atlanta,” Eric said. “That’s a city, too. It’s in Georgia.” Eric smiled. “Atlanta ends with an
a.
It’s our sixth a. I’ll bet you’re stuck.”
Cam closed her eyes and said,
“Click.”
Cam always says,
“Click”
when she wants to remember something.
“Wait! Wait!” an old man called to his dog, which tugged at its leash. But the dog ran ahead.
The dog ran alongside Cam.
“Stop! Stop!” the old man called.
The dog stopped. It turned and looked at the old man. Then it turned and ran around Cam. The dog’s leash wrapped around her. And the old man bumped into her.
Cam opened her eyes.
“It was my fault,” the old man said. He unwrapped the dog’s leash. “And Oliver’s fault. We’re both sorry.”
Ruff ruff!
the dog barked, and ran ahead.
“Wait, Oliver! Wait!” the old man called to the dog. But the dog didn’t wait, and the old man had to run to keep up with him. 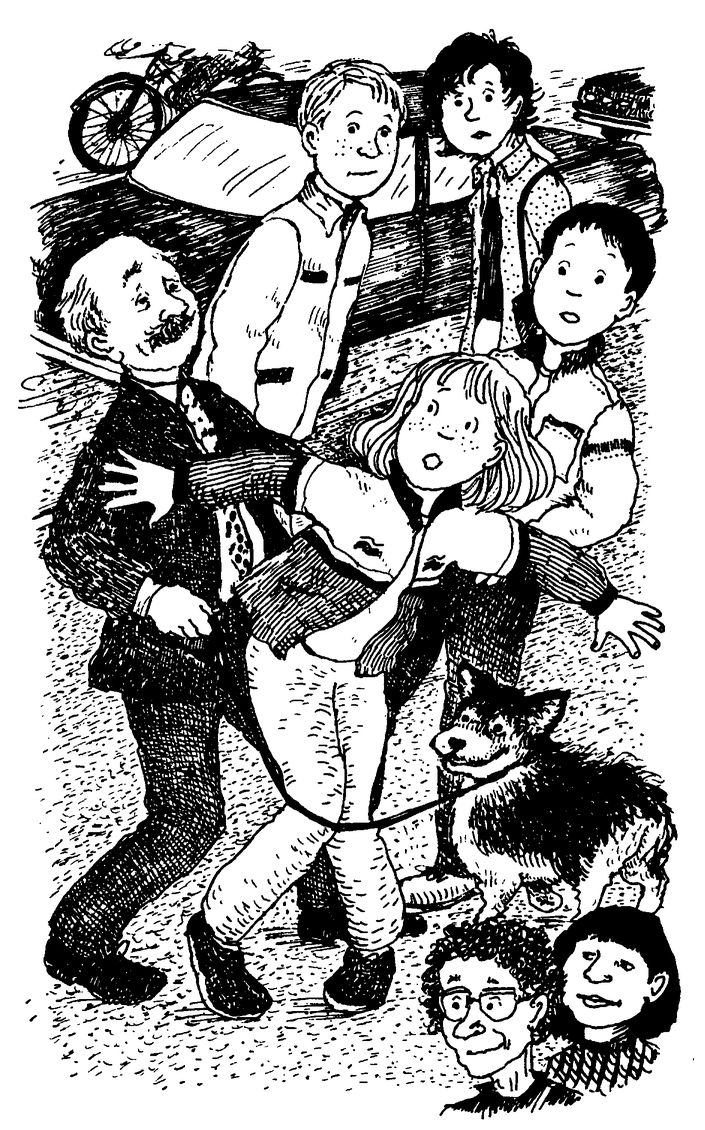 “Stop playing with dogs,” Mr. Jansen told Cam.
“Dad,” Cam said and smiled. “You know I’m not playing with dogs. I’m playing Geography and I need an
a.
”
Cam closed her eyes again and said,
“Click.”
Then she said to Eric, “I’m not stuck. I know lots of places beginning with the letter a. There’s Alaska, Arkansas, Ann Arbor, Altoona, Albany, Alton, Allentown, and Akron.”
Cam smiled. “I have a picture in my head of a map of the United States. I’m looking at it.”
Cam rubbed her chin and said, “Akron. It’s a big city in Ohio. Now you have to name a place that begins with an
n.”
Cam has what people call a “photographic memory.” It’s as if she has a camera in her head and pictures of just about everything she has seen. Cam says
“Click”
when she wants to remember something. She says it’s the sound her mental camera makes.
Cam’s real name is Jennifer, but when people found out about her amazing memory, they began calling her “The Camera.” Soon “The Camera” was shortened to “Cam.”
Cam’s eyes were still closed.
A woman wearing a purple hat with a large brim, and carrying a large bundle, bumped into her. “Excuse me,” the woman said, as she walked past. 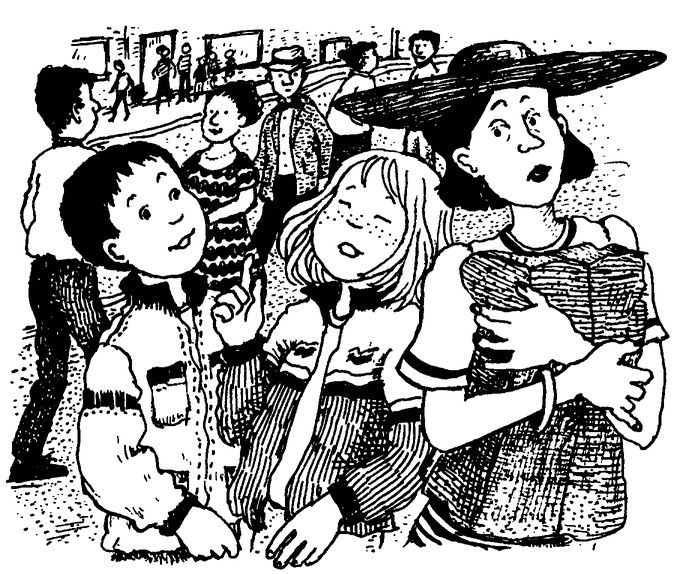 “Please, open your eyes and look where you’re going,” Mrs. Jansen said to Cam.
Cam opened her eyes.
“This city is so exciting,” Mrs. Jansen said. “Please keep your eyes open and look at the tall buildings and all the people rushing around.”
Cam looked up. She saw a few pigeons resting on a high ledge. She also saw a helicopter landing on the flat roof of a tall building.
“Please help me find the Royal Hotel,” her father said. “I think it’s on the next block.”
“Yes! Look!” Mrs. Jansen said, and pointed. “We must be near the hotel. There’s a bellhop.”
Cam and Eric looked across the street. A man in a blue uniform with gold trim was pushing a cart loaded with luggage.
The traffic light turned to red. Cam, Eric, and Cam’s parents waited at the corner for the traffic light to change again. While they waited, they watched the bellhop put the luggage into a green van. 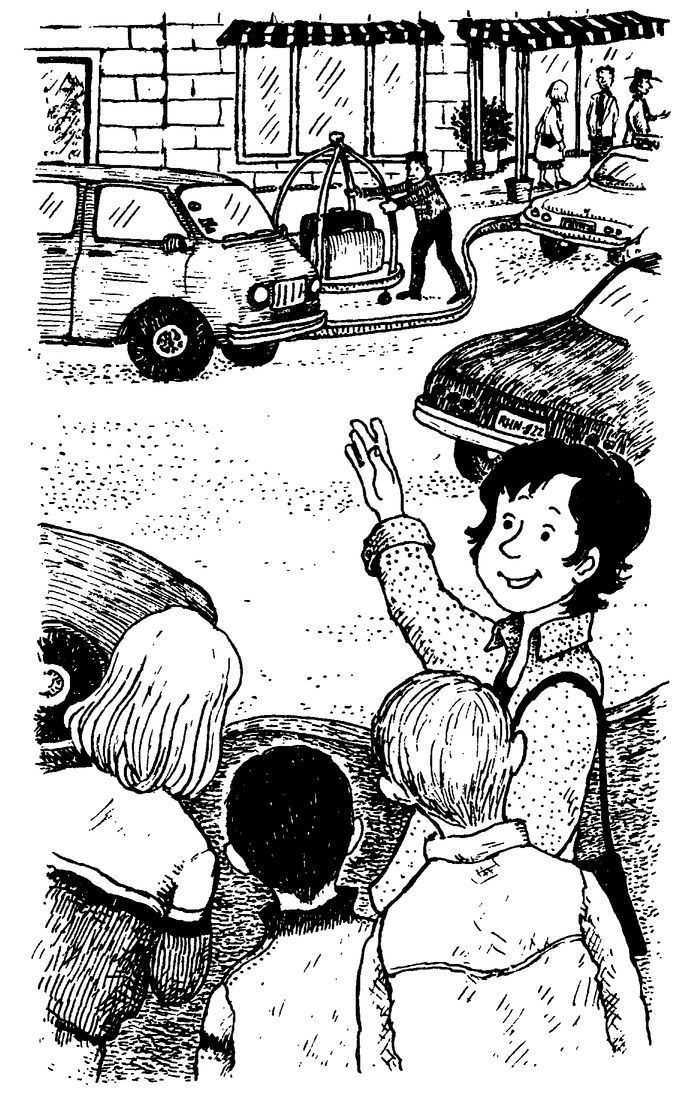 The Spoon in the Bathroom Wall by Tony Johnston
The Quantum Connection by Travis S. Taylor
Carolyn Davidson by The Tender Stranger
Gambler by S.J. Bryant
The Parting Glass (Caitlin Ross Book 4) by Katherine Lampe
Brightest and Best by Olivia Newport
The Ballad of John Clare by Hugh Lupton
Ever the Same by BA Tortuga
Sixty Degrees North by Malachy Tallack
Ravished by Keaton, Julia
Our partner