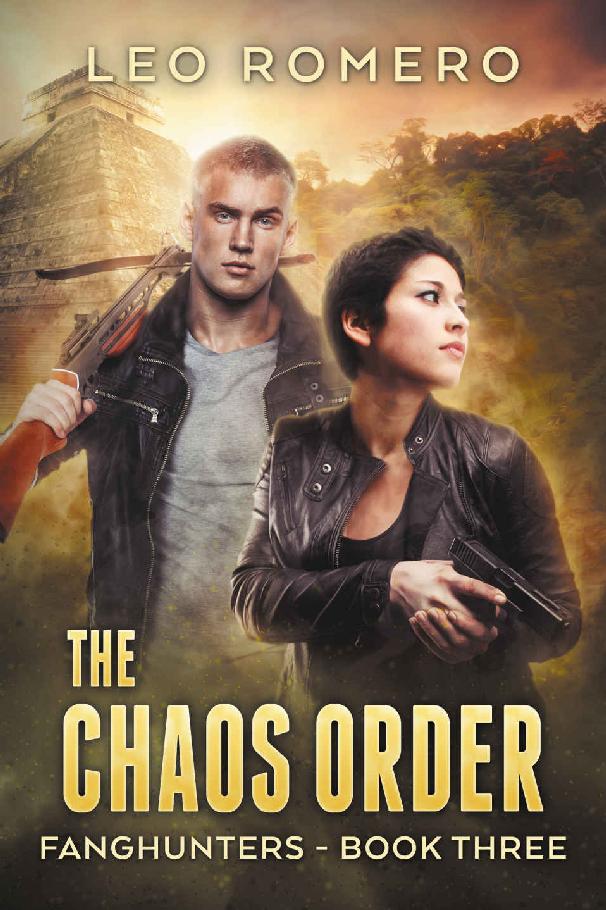 To sign up to Leo’s newsletter to receive updates, news on future releases and upcoming projects (no spam!), please click
HERE

Names, characters and incidents depicted in this book are products of the author’s imaginations or are used fictitiously. Any resemblance to actual events, organizations, or persons, living or dead, is entirely coincidental and beyond the intent of the author. No part of this book may be reproduced or transmitted in any form or by any means, electronic or mechanical, including photocopying, recording, or by any information storage and retrieval system, without permission in writing from the author.

R
amon Escobar was about to meet her. Magdalena. La Madre Impía
,
the Unholy Mother.

The Jeep went over a bump, snapping Ramon out of his drug-induced sleep. He swung his head left and right; behind his blindfold, the world was a hot, dark mystery, his location unknown to him.
Where the hell am I right now?
he asked himself in his world of darkness.
Honduras? Mexico? The plains of Guatemala? The mountains of Peru? The forests of Brazil?
He had no clue. The Brotherhood had sedated him back in El Salvador before transporting him to the temple of Magdalena.

The sacrificial ceremony was over. Now it was onto the hidden temple, where he’d be united with the Unholy Mother and finally anointed Don. What he’d spent his whole life striving for, surviving the streets of San Salvador for, where he’d engaged in petty crime, moving up through the ranks of Los Niños, leaving a trail of bodies to burn. From soldier to sergeant to captain, and now to Chaos Don.

He licked his dry lips. For the first time in his life, he was nervous. Something was swirling and fluttering in his stomach, something he didn’t like. It made his body tense like a taught guitar string. Made every bump in the road feel like an explosion. He’d be lying if he said he didn’t feel like he was about to shit his pants any second. It was funny to him; he’d had the business end of guns shoved in his face, been chased by cops—who were more like a military unit—across dusty streets, even thrown in a cage filled with hardcore bangers from rival gangs, but none of that ever made him feel like this. This was something different. It was fear. Pure and simple fear. And he didn’t dare let anyone see it on him.

He stiffened his back, wanting to be rigid, like a piece of steel. The two bodies sandwiching him were silent, except for the occasional cough or clearing of throat. Sometimes they’d spit out of the window or pass gas, letting rip and sharing their stink with Ramon whether he liked it or not. They smelled of dry sweat, burned tobacco, and cheap cologne. The heat emitting from their bodies was suffocating, the crappy air con doing a shitty job of cooling him. Sweat poured down his back, sticking his shirt to his skin like glue. He wished they’d put some music on the radio; some Latino, hell, even some gangsta rap would do,
hombre
. Anything to break the tense ambience.

They moved on in silence, the journey seeming to last an age. Where were they going, the center of the earth? The temple location was a deeply held secret, its whereabouts known only by highly ranked and trusted members of the Brotherhood. But, after today’s encounter with the Unholy Mother, Ramon would earn that trust. She would kiss him, bestow him with eternal life, and he would finally be Don of Los Niños, Don of El Salvador. From there, he’d be vaulted into the Inner Circle; those who ruled the lands of Latin America with an iron fist.

The sense of anticipation was overwhelming; suffocating. He wanted the moment to arrive already. He wanted to feel her caress, to have her blessings flowing through his veins, to be taken to the higher level where he’d take his rightful place among the chosen. They say that only those with unclean blood can survive an encounter with the Unholy Mother and ascend to the rank of enlightened. Was his blood too clean for her? Were his sins and the sins of his forefathers worthy of her dark embrace? The Brotherhood had faith in him; he’d been the one selected amongst all the other scum to lead them to the promised darkness. If
they
believed, then so did Ramon. All that mattered now was what Magdalena made of him.

Car doors were flung open, and he was finally relieved of the fat, sweaty guys squeezing him either side. His head rolled in its socket, the world still a dark mystery. A hand grabbed him under the arm, making him flinch. He didn’t like being touched like that; he was about to be made a Don. He wasn’t some punk off the street. The hand yanked him across the seat. Ramon played it cool; this wasn’t the time to start any shit. Not a word was spoken as he was guided out of the Jeep. He stood to attention, weird sounds and sensations all around him. The sudden humid atmosphere clung to his skin like hot gas, sending his body temperature soaring. Somewhere in the distance a river ebbed and flowed; above him, exotic birds cawed. Wild animals rustled bushes as they darted left and right.

Am I in a jungle?

Before he had a chance to answer, hands gripped him under his arms, and they got moving.

Ramon kept a steady pace, placing his faith in the Brotherhood members accosting him. Each step he took on the uneven ground was another obstacle. Every now and then, he tripped on some small branches and stones, but he was held upright before he could fall. He was a blind man being taken to an unknown location. It was like being led to a remote jail.

With each passing step, the anticipation inside him grew stronger; his stomach churned, his heart raced. He was nearly there; so near, so close.
Mama, your favorite son is coming...

Somewhere high above him, a bird squawked out loud, making his head twitch. A flurry of similar sounds echoed throughout the dense jungle. Things he’d never heard before. The jungle he knew was filled with the sound of gunfire and cop sirens. This was another world. Like a dream.

Mud squelched under his shoes as they delved deeper into the jungle. The air turned even more cloying. Ramon’s throat dried out; he couldn’t remember the last time he took on fluids. It must have been back in El Salvador. He just hoped he didn’t collapse from thirst before they reached the temple. He was so close, he couldn’t let something stupid like that stop him now.

They carried on moving through the jungle.

And then, after what seemed like an age, they stopped. Ramon’s ears pricked. Now every jungle sound was amplified; the march of insects crawling along the ground, the croak of exotic frogs, the cry of birds, every flap of wing. In the near distance, the rush and crash of a waterfall. His breathing was shallow; his heart thudded hard and steady.
Was this the moment?

Then, they began moving again. A hand was placed on top of his head, forcing it to lower. He bent down as he went, his feet scratching across stone, the sound echoing all around him. They stopped for a moment. The noise of the jungle was now replaced with a tomb-like silence. The air here was cooler; dank. Ramon instinctively knew his skin was enveloped by chilled darkness; it was welcoming, comforting. The hairs on the back of his neck sprang to attention. This had to be the temple of Magdalena.

He began striding further into the dank environment alongside his two chaperones, a shiver crawling up his spine. Like a switch, the sweat plastered all over his body turned cold. He spun his masked head left and right in trepidation. There was a strong foreboding all around him; he could sense it. Deprived of his vision, his inner eye was now amplified. He could smell and taste the evil around him; the stench of death and decay were strong in his nostrils. A pressure—a type of suffocating malevolence—was now omnipresent. This was a place of evil. A neighborhood of Hell.

There were eyes on him; unnatural eyes. Their cold stares burned on his skin. Ramon had stared into the eyes of a thousand gangbangers, witnessed the desperation, felt the hatred emanating from them, but this was on another level. These weren’t the eyes of gangbangers watching him; these were the eyes of inhuman creatures, injecting him with undiluted bile and hatred. Fear spread across his body like electricity; it shrunk him, cut off his
cojones
, made him weak. He was in the midst of something he couldn’t possibly understand. This wasn’t the hood, this was something from another world, another place, worse than any jail cell.

You better run, homie,
a voice in his head told him. It was a childish fear of the unknown rearing its ugly head in his mind. His trembling legs wanted to turn and run, but he knew in his heart that if he did, the guys accosting him would just put a bullet in his skull and declare him a
puto
. And that’s what his legacy would be. Ramon the coward.

No, no, he had to soldier on. See this thing through to the end.

He steeled himself with a deep breath of that dead air and tried to stand tall as he walked, even though his legs were shaking. They led him deeper into the temple where he could sense those eyes on him with more intensity. In his mind, he envisaged a rotten tongue licking dry, ancient lips with glee. The Unholy Mother was waiting. And she was hungry.

They came to a stop once again, and now a low rumble took over as if they had descended into the very earth’s cavernous depths. His ears pricked to the sound of scraping stone. When it stopped, silence took over. Then, without warning, his blindfold was torn from his head. He started, his heart missing a beat. His eyes squinted in the dim light. Before he had a chance to turn his head, he was shoved forward toward the open cavity ahead of him. Waiting beyond was a flight of stone steps. Ramon tumbled down them, smashing into the stone floor at the bottom with a grunt.