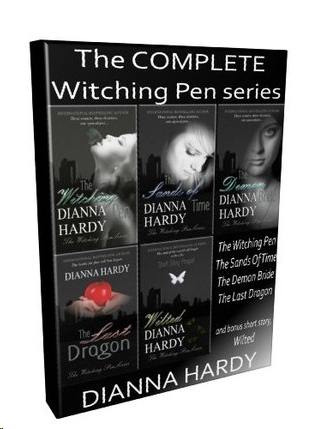 Book one: The Witching Pen

Book two: The Sands Of Time

In this work of fiction, the characters, places and events are either the product of the author's imagination, or they are used entirely fictitiously. Any resemblance to actual events or locales or persons, living or dead, is entirely coincidental.

No part of this book may be reproduced by any means or in any form whatsoever without written permission from the author, except for brief quotations embodied in literary articles or reviews.

Book One:
The Witching Pen

all my crazy stuff.

“
Feeeel
everything around you … go into it … become one with it...”

It was at these moments Elena had to try really hard to feign interest. It wasn't Amy's fault. Amy was just … well, she was Amy, and this was a Wicca group.

Except Elena. Elena was not a Wiccan, but she couldn't tell anyone what she really was: a thirteenth generation witch. Her lineage granted her powers that other fellow witches, whether Wiccan or not, did not have – Elena was the real deal. For the hundredth time, she had to remind herself that the reason she came to these sessions was to connect with others, to make friends. The fact that she already knew how to do what Amy was trying to teach (and knew how to do it using
actual
magic) was completely beside the point. Elena, although mostly happy with her own company, occasionally felt alone – too alone and too different.

Closing her eyes and trying hard to go with it, Elena let herself
feeeel
her surroundings. It was like slipping into a warm favourite coat and it came far too easily to her.

Elena, hold back – don't get carried away.
It was her own voice of reason saving her.
No one needs to see what happens to you when you lose yourself in meditation...

“Okay everyone – great session today. Don't forget your glamour spells for next week,” she called out as people filed out the door and others hung back in the hope of gaining advice, maybe praise, from the group leader. They were all of mixed ages, anything from eighteen to sixty.

“Elena, can I have a quick word with you?”

Elena always tried very hard to stay out of everyone's way, she tried especially hard not to engage in conversation with anyone. It wasn't that she disliked people, but people invariably ended up disliking her … or at least afraid of her. But she knew that her distance wasn't helping her cause to make friends and curb her loneliness, so instead, she put on her best I'm-one-of-the-crowd-voice, and said, “Sure.”

“Elena, you've been coming here for three months now and you haven't led a session yet. I think you should, or at least think about it.”

“Sure,” she said again.
No way – unless you're all prepared to see me floating off the ground and accept it as reality.

“Okay … well, how about next week? It's the full moon – you could lead the glamour session.”

“Great! That's settled.” Amy beamed a smile through her immaculate, white teeth that left no room for compromise, and swiftly turned away from her to talk to her avid followers.

She had tried really hard to like Amy, but no matter which way she looked at it, she couldn't help but think of her as fake. Not a fake witch – no, Amy exuded magic – more like a fake human being. She feigned compassion, Elena was sure of it.

With a slight smile, she reached into her bag as soon as she was outside the meeting room, and pulled out a pen. It was nothing special to look at – a standard fountain pen, with a dark blue, metallic surround. She could have bought it at the local newsagents, but she hadn't – no, she'd found it in the middle of the suspension bridge that hung over the river. She would never even have picked it up were it not for the fact that at that second, she had been on the phone, with notepad in one hand, needing to write down a name her mum was spelling out for her. Her other hand had been rummaging around her rucksack for a pen she didn't have … and then the sun had bounced off this one...

Knowing she really shouldn't, but itching to let out some real magic, Elena pulled out her notepad and started to write...

Suddenly and completely out of the blue,

and pooled around her ankles.

From behind her, back in the room she'd just walked out of, Amy let out a squeal of horror as a few hushed giggles floated on the air.

“Okay, so I'm officially a bad witch,” muttered Elena, “but that was
so
much fun!”

The smell of roast pork greeted her as she walked into her flat. Karl was cooking roast?

“So? Is Saturday roast against the law?”

“Well, maybe there are a few things you don't know about me,” he teased. “How was your fake witch group?”

She groaned. “Don't. Amy wants me to lead the session next week.”

Karl hooted his laughter, which was met with a slap on the arm from Elena.

“Does she know you'll scare away her little band of followers if you're allowed to do such a thing?”

“No. I don't know how to get out of it. It's crazy – I'm twenty-five years old, and yet the woman reduced me to feeling like a clumsy, mute teenager.”

“Just magic your way out of it.”

“
Not
something I want to resort to. Come on, you know the rules.”

“Rules are there to be broken.”

“Well, if you'd do me the honour of making mad, passionate love to me, I'd be a witch just like you.”

Elena sighed. Of course this wouldn't be the last time they had this conversation.

Elena had known Karl, “the boy from across the street”, since she was five and he was seven. By his declaration, he'd been in love with her ever since he was ten years old and saw her bring a butterfly back from the dead, an act which had shocked her mother into an eerie silence. Elena had never reciprocated his love – at least, she didn't think she loved him. Loved him as a best friend, undoubtedly, but not
in
love with him. It was in fact possible, that by the sheer impossibility of her ever being able to be with anyone at all, she'd simply denied any feelings she may have had – after all, that was better than admitting the truth. The truth would lead only to grief.

“You don't want me, you just want my powers.” She knew she shouldn't play this game, but she desperately wanted to make light of the situation. Karl was the least power-hungry person she knew.

“Yep, okay, yes, you win – I want your powers, you're absolutely right … now give them to me!”

She squealed, half in frustration and half in delight, as he catapulted her over his shoulder and ran for the living room couch.

“Not until you submit, woman!”

Regardless, he still dropped her onto the couch. She was not a large woman, but she was taller than average, with Karl only half a head taller than her.

“You out of breath?”

“You kidding me? You're a waif.” He knelt on the floor and laid his head on her lap. “Elena?”

“What are your plans for the future?”

A silence filled the air, growing heavier with every heartbeat.

“Aren't you going to burn the pork?”

“It's on a timer. And don't change the subject. I know you don't want to talk about me, or us, but there's still
you
. What are you going to do?”

“Karl...” She really didn't want to talk about this.

“You're a twenty-five year old virgin.”

“Hey yourself – it's true. I know it's not your fault, but … is that it? You're never going to give yourself to anyone because of a condition?”

“My lineage is not a condition.”

“It is if it means you can never have sex … or never show your love to someone.”

“And you're hoping that someone is you, right?” It was a bit of a sneer and she knew she was hitting below the belt, but her irritability levels had shot right up since he'd mentioned the V-word. Yes, she was a virgin. She had no choice in the matter. If she decided to sleep with someone...

“I'm hoping you end up happily married to the man of your dreams and have a hoard of beautiful kids that'll keep you on your toes by turning your neighbours into various types of pond-life.” He then shot her his signature grin. “But if it happens to be me, then I wouldn't say no.”

His grin was truly infectious. As a boy, it was the first thing she'd noticed about him – that grin had gotten them both out of trouble on many occasions – and it was framed by a face that had never lost its boyish looks, from the dimples in his cheeks, to his unkempt, sandy blond hair and his sea blue eyes. He was your typical boy next door – the one your mum would want you to marry, unless, of course, you were Elena's mum. Never the social butterfly, Katherine Green, Elena's mother, had never taken to any boy that Elena had found remotely interesting. When she was fifteen, Elena had begun to talk about Karl more – maybe she'd given away something in her eyes, because that was when Katherine had sat her down and told her the awful truth of her magical inheritance...

“No interruptions, please. I've been dreading this day...” Her mother sat down next to her at the breakfast table and took her hand. “Elena … you're special. Being the thirteenth in our family line makes you special … with that come certain responsibilities.”

Elena rolled her eyes. “Mum, I know about condoms and stuff.”

“Well you don't know about this … you can't ever
be
in a relationship.”

“Sex is a powerful thing for any witch, just like a first bleed is, but for you, it's ten times more potent.”

She remembered her first period. She'd been thirteen and the moment she'd felt that first trickle down her inner-thigh, unearthly storm clouds had drawn in and the sky had been torn apart by thunder – an “April shower of unexpectedly large proportions” is how it was reported on the news, but she had known otherwise. That tingle at the back of her neck always told her when something magical was afoot. The next two weeks had seen her fending off men – all men and any man – apparently she'd become some kind of 'fuck me' beacon, wafting magical pheromones all over the place. The only person who'd seemed completely oblivious to her change was Karl. It had crossed her mind that maybe he was gay.

Cowboys Like Us by Thompson, Vicki Lewis
Choices by Cate Dean
Fenway Fever by John Ritter
Fillet of Murder by Linda Reilly
Through the Flames by Ryne Billings
The Beachcomber by Josephine Cox
The Book of Death by Anonymous
Out of My Mind by White, Pat
Romancing the Pirate 01 - Blood and Treasure by Jennifer Bray-Weber
Princess Daisy by Judith Krantz
Our partner