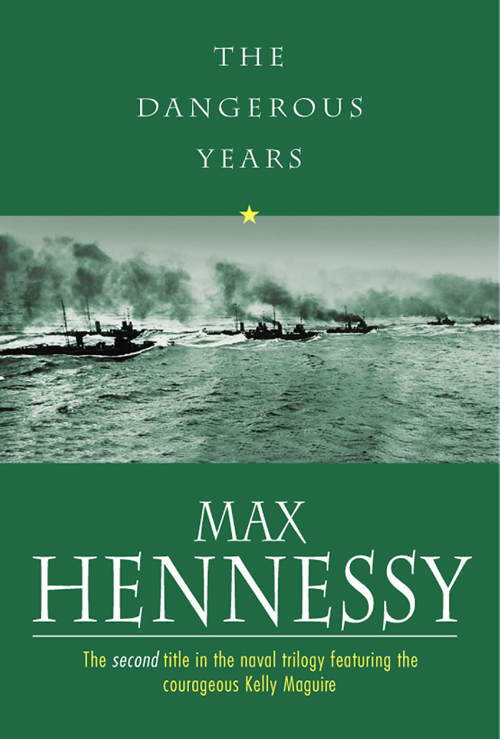 The right of Max Hennessy (John Harris) to be identified as the author of this work has been asserted.

This is a fictional work and all characters are drawn from the author's imagination.
Any resemblance or similarities to persons either living or dead are entirely coincidental.

John Harris, wrote under his own name and also the pen names of Mark Hebden and Max Hennessy.

He was born in 1916 and educated at Rotherham Grammar School before becoming a journalist on the staff of the local paper. A short period freelancing preceded World War II, during which he served as a corporal attached to the South African Air Force. Moving to the Sheffield Telegraph after the war, he also became known as an accomplished writer and cartoonist. Other ‘part time’ careers followed.

He started writing novels in 1951 and in 1953 had considerable success when his best-selling
The Sea Shall Not Have Them
was filmed. He went on to write many more war and modern adventure novels under his own name, and also some authoritative non-fiction, such as Dunkirk. Using the name Max Hennessy, he wrote some very accomplished historical fiction and as Mark Hebden, the ‘Chief Inspector’ Pel novels which feature a quirky Burgundian policeman.

Harris was a sailor, an airman, a journalist, a travel courier, a cartoonist and a history teacher, who also managed to squeeze in over eighty books. A master of war and crime fiction, his enduring novels are versatile and entertaining.

The rumours had been gathering strength for days. Even in late October stories of a mutiny in the German High Seas Fleet had begun to trickle through and now, finally, news had arrived that the German Kaiser had gone into exile. After four years of discomfort, hardship and sudden death, after four years of grief, misery and deprivation, it was almost over.

Ever since August, 1914, Europe had been engulfed in the greatest war the world had ever seen, but, at last – suddenly, unexpectedly after the setbacks of the spring – the end was now surely at hand. The past month had seen the collapse of Bulgaria, Turkey and Austro-Hungary, and a signal had been received only that morning to say that the war was finally dying.

Sitting in the motor boat of the destroyer,
Mordant
, as it chugged its way back from Stromness, Lieutenant George Kelly Maguire stared round at the wide expanse of Scapa Flow. Scapa was an amazing place, big enough to house all the navies of the world, yet, in its silences, its incredible colours and the extraordinary quality of its northern light, bewitching – a place you either loved or hated. Most people managed to do both.

Somehow, in his strength and stillness, Kelly Maguire resembled Scapa – as if he’d acquired some of its qualities. His gaze reflected the sea, grey, steady, and faraway with years of looking over great distances. His square face was older than his twenty-six years, with narrow crow’s-feet of concentration round his eyes and small tight lines at the corners of his mouth. Unruly red hair curled beneath his cap, only partially obscuring the fading pink line of the wound he’d received at Jutland two years before.

He looked again at the land, silent, lonely, and lovely in the crisp northern air. The shadows of the anchored ships of the Grand Fleet suggested a maritime Valhalla full of ghostlike shapes frozen into a crystal silence in which the leaden water was the only thing that stirred.

The ships were of all sizes, from huge battle cruisers down to destroyers, among them now French ships, and American vessels newly arrived to help defeat the Germans, who twice within forty-five years had thrown Europe into a turmoil with their restless armies. Though Kelly had seen the sight a hundred times since he had rejoined
Mordant
and
Mordant
had rejoined the fleet, it still left him a little awed.

He glanced towards his ship over the lifting bow of the motor boat. The destroyer lay quietly at her buoy. Apart from a period at Rosyth and a long refit to repair the grievous wounds she’d received at Jutland, she’d spent nearly four years at Scapa. And, unlike the big ships, the destroyers had always done long spells at sea, and the morale of their crews was high, despite the damp stickiness of their quarters, the smell of fuel oil and the fear of floating mines that gave them constant nightmares. They felt their sense of responsibility keenly and the bored big ship men had watched them come and go with envy, because to relieve the years-long monotony there had been only collisions on dark nights, fierce northern gales and the holocaust when
Valiant
had blown up to shower the rest of the fleet with debris and mutilated corpses.

As the motor boat approached
Mordant’
s stern, Kelly sat up. The thin November sun had appeared between two banks of cloud over Hoy and had flooded the Flow with light that caught the sides of the destroyer, to exaggerate her slimness and etch the lines of her guns. At Jutland, that scrambled battle in the murk two and a half years before, when they’d failed to annihilate the German High Seas Fleet, she had been left without a single one of them able to fire, and minus her bows and half her crew.

A pair of divers crossed the path of the motor boat, big black birds with outstretched necks, honking as they flew, their heavy bodies undulating to the beat of their wings. Knowing them to be the harbingers of winter, Kelly found himself crossing his fingers in a silent prayer that the promised peace would soon arrive. Another winter with the wind lashing the seas across the Sound so they could neither move nor go ashore, driving the spray in grey sheets over the iron-bound cliffs and bringing darkness in the middle of the afternoon, was almost more than he could bear.

As the boat bumped alongside
Mordant’
s companionway, the sun disappeared again over the hills of Hoy and night came abruptly. The wardroom was gloomy. The signal they’d received that morning that an armistice had been signed with Germany had been cancelled.

‘False alarm,’ Wellbeloved, the engineer officer, said. ‘And
I
put up drinks all round on the strength of having won the end-of-the-war sweep.’

Kelly accepted a gin. Wellbeloved had helped him fight the ship back from Jutland, a scarred, charred heap of wreckage on the point of sinking. The only two other surviving officers had long since gone. The Gunner had vanished to a light cruiser and the Sub had been replaced by Seamus Boyle whom Kelly had first met as a newly-joined cadet when he’d dragged him from the sea as the armoured cruiser,
Cressy
, had sunk under them in 1914.

Wellbeloved placed the glass in Kelly’s hand. ‘It must end
soon
, mustn’t it?’ he asked.

As it happened, they hadn’t long to wait. Thirty-six hours later the signal came that the Armistice really had been signed. The news was brought by
Mordant’
s captain, Lieutenant-Commander James Peter Orrmont, who had arrived to take the place of the man who had nursed the ship through her refit. He had spent most of the war sunning himself aboard the battleship
Glory
in the Mediterranean and had a somewhat flippant attitude to the North Sea. He was clever and shrewd and was a born staff man, with a sharp appreciation of everything and a manner Kelly knew it would take him, Kelly, years to acquire. He was smooth and confident and, though his ship-handling experience was not extensive and he’d seen little of the war, it was quite clear he didn’t expect it to be a drawback since he fully intended his future to be in planning rather than seafaring.

‘The party’s over,’ he said cheerfully. ‘The signal’s finally arrived and this time the Germans really have thrown in their hand.’

The wardroom erupted in a wild cheer and Wellbeloved grinned all over his face. ‘Do we break out the champagne, sir?’ he asked.