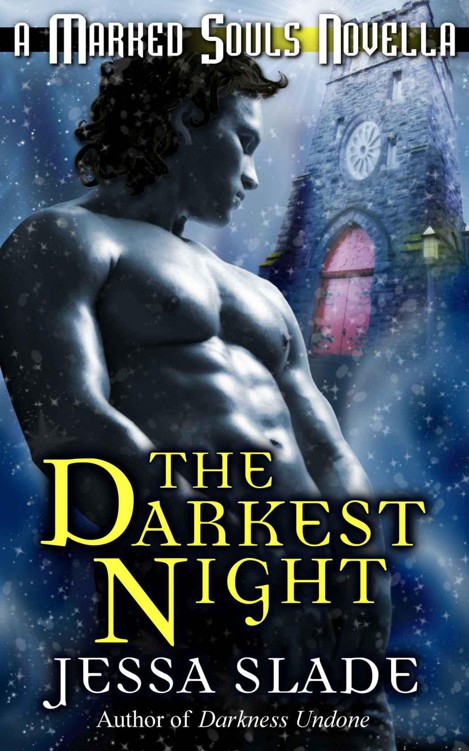 Praise for the Marked Souls

Wishing you a demonic Christmas...

Possessed by a divine entity, Cyril Fane fought rampant evil and the pain of more private losses with a fiery golden sword…until he was beaten and left for dead by a malevolent force. Now exiled from his angelic brethren, he reluctantly joins the Chicago league of talyan—immortal warriors possessed by repentant demons—as his only chance to reclaim his sword and his place in the holy sphericanum.

Bella McGreay, mysterious mistress of the Mortal Coil night club, has also danced around an uneasy affiliation with the talyan. She has secrets of her own to keep, and as the days shorten toward the winter solstice, shadows are deepening all around. Even as she barricades herself against the joys—and terrors—of the Christmas season, she’ll have to decide whether the shadows or her secrets are more dangerous.

Bella and Cyril have good reason to fear evil when an old enemy returns to torment them and the Chicago league. But only together will they find a way to the light after the darkest night.

Novels of the Marked Souls

Novels of the Steel Born

Other stories from Jessa Slade

The nights before Christmas were annoying enough to make even an angel swear.

Cyril Fane forgave himself as he cursed and swerved his Porsche around a minivan of suburbanites gawking at the holiday lights strung along the Magnificent Mile. Not yet rush hour and already Chicago’s downtown bustled with holiday crowds, filling the early darkness with their shopping bags, their good cheer, and their damnably low-horsepower vehicles. If they knew how the longer, darker nights provided ever-deeper shadows for the demonic tenebrae, they would all scuttle home.

Of course, not everyone had a home waiting for them.

Fane crushed the thought like a burned-out Christmas light bulb. Useless. But the warning from the afternoon visit with his only remaining friend in the sphericanum still scalded:
“…Lost your abraxas to the djinn-man… Conspiring with the talyan… Exiled… Don’t come back, Fane, or we
will
slay you.”

Swearing again, he cut over to Lake Shore Drive, aimed toward his big empty house, and punched the Porsche up to law-of-man breaking speeds. God would forgive even an ex-sphericanum warden like him.

At the last exit, Fane changed his mind and circled into the city, past the high rises and towers, back toward the rougher neighborhoods. No twinkling lights here, just the fading blacklight glow of demon ichor, faintly visible to the angel within him, marking where the tenebrae had passed on their own nefarious tasks. Spits of icy rain caught the yellow, sodium-vapor glow from the street lights, as if the heavens were pissing on him.

Maybe the talyan had commandeered the place for a twelve-step meeting. The Chicago league of demon-possessed warriors often spent their afterhours in the crude and morally questionable environs of the night club.
Step whatever: Admit that a Higher Power has totally hosed us…

He parked the Porsche directly under one of the street lights, said a skeptical prayer it would still be there when he returned, and headed for the door. For once, he might be able to appreciate a good bar fight.

The old bricks were rounded with age, but the stained glass in the circular window above the door glittered sharply. The snake eating its tail seemed to stare at him with ageless mockery in its one yellow eye. He ignored it and reached for the handle, but the curved wrought iron jerked out of his grasp.

In the darkened doorway, Bella gasped, one hand over her heart. “Jesus Christ.”

“Not for a few more days,” Fane said. “There’s still time to shop.”

She glared at him, almost as baleful as the snake above her. Behind her old-fashioned, cat’s-eye glasses—out of place on her youthful face—her eyes were clouded, reflecting a blue-white smoke. Fane peered at her, wondering how much she could see through the cataracts. He’d heard a couple of the talyan wondering the same, and not just in the physical sense. The Mortal Coil’s young mistress knew things sometimes, things most people couldn’t fathom. The cataracts made her eyes look old when she couldn’t be much past her mid-twenties.

Whether she saw or just sensed his perusal, she patted her red beehive self-consciously. “We’re closed.”

She must be able to see something, he decided. How else could she arrange such an elaborate hairstyle? The red locks were plumped high and smooth with only two curls wisping down on either side, and he guessed those mirrored runaways were probably deliberate. From what little he knew of Bella McGreay, she had too many secrets to let a stray hair be just a stray hair.

Without touching him even though he’d claimed a good chunk of the doorway in his double-breasted, black wool peacoat, she took a step forward. “Can’t you read the sign?”

He leaned sideways, not willing to give up his space, to read the paper taped in the window. “
‘Go home for the holidays, you fucking delinquents,’
” he read aloud. He tapped the glass. “The Santa hat on the skull and crossbones is a nice touch.”

“Thank you. I was feeling festive. Good-bye, Warden Fane.” She reached around him for the door handle, and the fake fur cuff of her coat grazed his hand.

A little spark of static electricity—not uncommon in the dry winter air—jumped between them. He frowned at the sting. “Ex-warden. I was hoping to find Liam and his crew here tonight.”

She pointed one gloved finger toward the sign. “Closed. Go home. Remember?”

“I know they didn’t go home to their families.”

“No. Their cousins are on the prowl tonight, as every night.” She lifted her face to the black sky. For a heartbeat, the yellow of the street lights flashed across her glasses. “They’ll never go home.”

Fane wasn’t sure if ‘they’ meant the talyan or the tenebrae demons they hunted, but he supposed it didn’t matter. The league talyan, possessed by repentant teshuva demons, were every bit as cast out as their decidedly unrepentant brethren.

As he was cast out.

He widened his stance, forcing her back a step if she didn’t want to touch him. “Maybe I can leave them a message with you.”

She scowled. “Just because I’m eloquent with pen and paper—”

“Ever heard of the telephone?”

“This isn’t the sort of message I want anyone else to hear.” The talyan had evidence that the sphericanum, for all its divine calling, had a predilection for infiltrating more terrestrial calls. “Warrantless wiretapping seems to be all the rage these days.”

Her scowl deepened. “Then go find them. They’re out there, somewhere. Look in the dark corners.”

“I doubt they want to see me again, considering my abraxas is empowering the enemy. As if almost getting the oldest known female talya and their Bookkeeper killed wasn’t bad enough.”

After a moment, she swept her hand inward. “Fine.” Her long-suffering sigh wreathed the freezing air around her beehive. “Quick, though.”

He stepped into the cavernous club and waited for his eyes to adjust. For all the winter darkness outside, inside was gloomier yet. Illuminated rope lights lined the bar at the far end of the room and one pendant light glowed over the cash register, but other than that, only the red glow of the exit signs lit the space. His breath puffed out—was it colder in here than out there?—and he pulled his coat tighter around him.

He followed the clack of the red heels on Bella’s high-laced fake fur boots. The echo across the dance floor seemed louder than it needed to be, a rhythm of annoyance. He could relate.

At the counter, he paused while she went behind the bar. From beside the cash register, she pulled a kitchen ticket book and pen, and yanked off a page. “I can’t promise I’ll see them anytime soon,” she warned. “They only come here after really bad nights.”

“Then I imagine they’ll be in here sooner rather than later.”

She tilted her head as if studying him, or maybe just considering the nature of the threat behind his words. She took a breath, then let it out again in a swirl. “What do you want to tell them?”

“I met with a friend in the sphericanum today,” he started.

“Dear Marked Souls,” she muttered as she wrote. “Today I had a death wish…”

He couldn’t help himself. He laughed. The sound came out like a ghost, white and drifting in the frigid air. “I figured I could risk the meeting since my friend would want to tell me off one last time. Nothing the sphericanum likes better than chastising.”

“She.” Fane shrugged. “And at least she’d shoot me in the face, not in the back.”

Bella poised the pen over the paper again. “Admires honesty in a woman above all. Has a sweet-ass ride. How about I write a personals ad for you instead?”

His amusement chilled. “I don’t do personal.”

“Christmas must be very lonely for you.” She gave him a catty grin to match her glasses.

He gripped the edge of the bar. “I thought we were making this quick.”

He glowered. “Tell Liam the sphericanum has also noticed the change in tenebrae activity. Where we—they—were seeing an uptick in demonic energy, since Thorne took over—”

She tapped the pen against her lower lip. Like her beehive hair and her faux fur heels, her wide mouth was another shade of red too lush to be real. “Took your sword, you mean?”

So much for bee-stung lips. She
was
the stinger. He inhaled once, slow and deep, reaching for the peace that was his. Or
had been
his when his abraxas was in his hand. Of course, the peace had really been his only when he was chopping demons to pieces.

The cheap plastic of the counter creaked under his fingers. “Since Thorne, the sphericanum, like the talyan, have had fewer tenebrae encounters—”

“But that’s good,” she interrupted. “That’s, like, the definition of good. No evil.”

He shook his head and continued, “Fewer encounters even though the amount of ambient demonic energy has not decreased.”

“So the horde hasn’t gone anywhere. They are just…” She let out a shaky twist of breath.

“Waiting,” he finished. “For something. Which can’t be good. Why is it so damned cold in here?”

“Because it’s almost the longest night of the year.” She fell silent—miraculous, he thought, with unnecessary acidity—her head bowed. Then she tucked the pen behind her ear. “What’s your poison?”

The abrupt zag of their conversation loosened his grip on the counter and his anger. “What?”

“A drink. It’s what I do here.” She stripped out of her heavy parka, revealing the vermillion-hued wrap dress underneath. “What do you like?”

The wrap’s deep V neck revealed more of her cleavage than seemed necessary on a winter night when the bar was closed. His fingers itched to pull the V tight around her pale skin. “I don’t drink.”

“Which explains why you’re such a dried-up old sourpuss.”

He yanked his attention away from where it had wandered. “Excuse me?”

“Well, I hear you like honesty in your women.”

“I don’t do
women
either,” he said through gritted teeth. To be teased when he couldn’t even remember the last time…