Read The Darling Dahlias and the Texas Star Online

The Darling Dahlias and the Texas Star 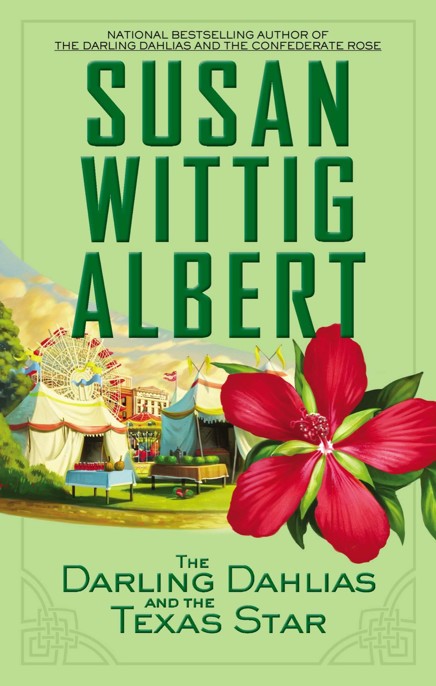 A DILLY OF A DEATH

THE TALE OF HILL TOP FARM

THE TALE OF HOLLY HOW

THE TALE OF CUCKOO BROW WOOD

THE TALE OF HAWTHORN HOUSE

THE TALE OF BRIAR BANK

THE TALE OF APPLEBECK ORCHARD

THE TALE OF OAT CAKE CRAG

THE TALE OF CASTLE COTTAGE

THE DARLING DAHLIAS AND THE CUCUMBER TREE

THE DARLING DAHLIAS AND THE NAKED LADIES

THE DARLING DAHLIAS AND THE CONFEDERATE ROSE

THE DARLING DAHLIAS AND THE TEXAS STAR

With her husband, Bill Albert, writing as Robin Paige

DEATH ON THE LIZARD

WORK OF HER OWN

The Darling Dahlias and the Texas Star / Susan Wittig Albert.

Letter to the Reader

For Lucille, Pearl, Mildred, and Josephine,
four sisters who made the best of even the worst of times.

The Darling Dahlias and the Texas Star
takes place in the summer of 1932. Across the United States, it has already been a year of extreme highs and abysmal lows. More than 13 million Americans have lost their jobs since 1929, and in that same period, more than 10,000 banks have failed—at a time when there is not yet any unemployment or depositors’ insurance. The Dow Jones Industrial Average has dropped to 41.22, down 340 points from its bull market high of 381.17 on September 3, 1929.

Looking to the future, the Republicans have nominated President Herbert (“Brother, Can You Spare a Dime?”) Hoover for a second term, while the Democrats have selected Franklin Delano (“Happy Days Are Here Again”) Roosevelt. Hoping to collect the compensation already due for past service, the Bonus Army of 20,000 Great War veterans has marched on Washington, D.C., and it will take General Douglas MacArthur, an infantry regiment, a cavalry regiment, and six tanks to oust them. It is also the year of the Lindbergh baby kidnapping, of cigar-smoking Bonnie and gun-toting Clyde, and dust storms that turn the sky over the Great Plains, as Aunt Hetty Little would say, as black as the inside of a dog.

Nineteen thirty-two is a year when everything seems to move slower than molasses. The Gross National Product has fallen 43 percent since 1929, and the unemployed and homeless are mired in a Slough of Despond. But it’s also a year when things go faster and farther than ever before—a time of exciting achievements. Jimmy Doolittle flies his Gee Bee Model R-1 aircraft into the record books with a speed of 296 miles per hour, and Amelia Earhart pilots her Lockheed Vega 5B (which she affectionately calls “Old Bessie, the fire horse”) from Newfoundland to Ireland in 14 hours and 56 minutes—the first woman to fly solo nonstop across the Atlantic. Not satisfied with that record, she flies from Los Angeles to Newark in just over 19 hours, the first woman to fly solo nonstop across the United States.

When I began this mystery series, I thought it might be difficult to write about the Depression, because . . . well, lots of people were depressed. But as I’ve dug deeper into the newspapers, magazine articles, interviews, and letters of the time, I’ve learned that while people saw very clearly the difficulty they were in, they resisted giving in to their heartaches and fears. In my family, my mother always told me, “Folks just put their heads down and kept on keeping on.” Hard times, yes, and people in our family didn’t have one nickel to rub against another. Or, as Mom wryly put it, “We darned the darns in our stockings and then, gol-darn it, we darned ’em again.” But they worked hard, found fun where they could, and met often overwhelming challenges with courage, determination, and a deep awareness that almost everybody was in the same leaky boat.

And throughout my research, it is the women who have impressed me the most, the women who made do or did without, shared what they had with those who had less, and smiled as hard as they could to cover their tears.

That is the spirit I want to celebrate in these books about the Darling Dahlias.

I hope you find their stories as heartening as I do.

Thanks to Deborah Winegarten, whose wide acquaintance with the life and times of Pancho Barnes and other early women pilots (and her wonderful collection of books!) gave me a wealth of ideas. Thanks to Nancy Lee McDaniel, for volunteering to help out on the Darling switchboard. And special thanks to my husband, Bill Albert, who, among his many other talents, has flown small airplanes. He suggested some nefarious ways they might be sabotaged.

A note about language. To write about the people of the rural South in the 1930s requires the use of terms that may be offensive to some readers—especially “colored,” “colored folk,” and “Negro” when they are used to refer to African Americans. Thank you for understanding that I mean no offense.

This is getting to be quite a habit—having books written about our garden club, that is. And a very pleasant habit, too, we must say!

But we’re not one bit surprised that Mrs. Albert has decided to write another book about us, because every flower has a story to tell. And the story of the Texas Star (that would be
Hibiscus coccineus
,
according to Miss Rogers, who is such a stickler when it comes to Latin names) is more sensational than most. Who could have guessed that the Texas Star herself, Miss Lily Dare—the fastest woman on earth, faster even than Amelia Earhart!—would have chosen our little town to show off her Dare Devils Flying Circus. Or that Miss Dare might be the object of so much envy and hate because of the way she lived her life and . . .

But then, we’d better not say any more about that, because we might steal Mrs. Albert’s thunder and we certainly wouldn’t want to do that. Of course, we were understandably uneasy about a story that involves the secret shenanigans of the husband of one of our very own members. We don’t like to embarrass people we care about. So we sat down and had a serious discussion with Mrs. Albert about whether she ought to write this particular story or go find something else to write about.

But as Mrs. Albert herself is fond of saying, a little truth never hurt anybody very much, except where it ought to. And since everybody in town already knew all there was to know about the situation by the time the Dare Devils flew away, we decided that it was a story that ought to be told. We understand that this husband—whose name you will learn later in this book—has apologized to all concerned and promises to behave himself from now on. (We also hope that
all
our Darling husbands will profit from seeing his transgressions written up in a book and think twice before they stray too far from the straight and narrow.)

In our garden club, we all love flowers. But we have also planted a big vegetable garden. It is true that flowers are comfort food for the soul. But a big plate of green beans and fatback, stewed okra with tomatoes, buttered corn on the cob, and potato salad can go a long way to comfort a body, especially these days, when jobs and money are scarce as hens’ teeth and everybody’s got something to worry about.

And yes, it’s a sad fact but true: there is just too much grief and too many crooks and cheaters in this world. (We’re not naming any names—we’ll leave that to Mrs. Albert.) But we agree with a French fellow named Marcel Proust, who wrote, “Let us be grateful to people who make us happy; they are the charming gardeners who make our souls blossom.” So if you’ll excuse us, we’ll pay attention to being happy and hope that our souls will bloom.

And just to make sure, we’ll plant a few pretty flowers along with the beans and okra.

Poppies at the Well by Catrin Collier
The Fixer by Woods, T E
Love Notions by Mary Manners
False Nine by Philip Kerr
Ruled by the Rod by Sara Rawlings
The Big Book of Sherlock Holmes Stories by Otto Penzler
Time Will Tell by Fiona McCallum
Harmony by Sonya Bria
RuneScape: Return to Canifis by T. S. Church
Femme by Marshall Thornton
Our partner