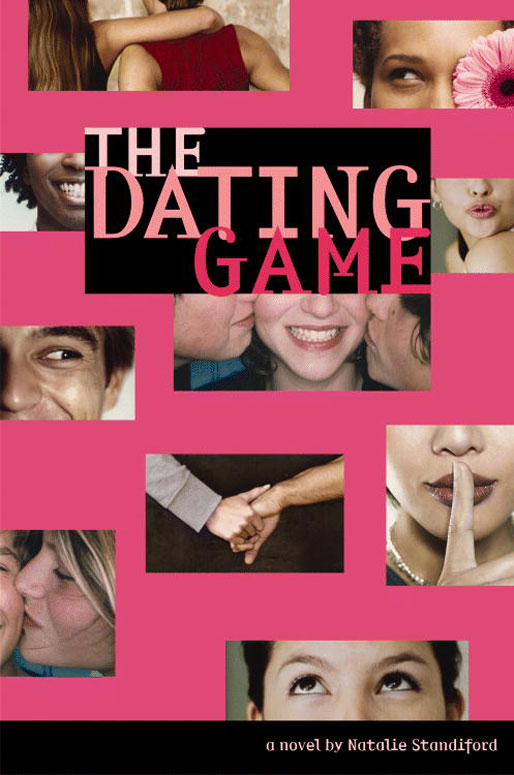 The Little, Brown and Company name and logo are trademarks of Hachette Book Group, Inc.

1: What Color Is Your Love Aura?

4: Fill in the Blanks

5: Death to the Normals

7: Prove That You’re a Human

9: Current Mood: About to Burst

10: Nightmare at the Pinetop Lounge

12: The Male Mind Is Impervious to Logic

19: What Color Is His Toothbrush?

Here’s a sneak peek at The Dating Game #2

For René, Biz, Darcey, and Hawes

What Color Is Your Love Aura?

From: Your daily horoscope

HERE IS TODAY’S HOROSCOPE: VIRGO: You will embark on a life-changing project today. Try not to screw it up.

(What is Sean’s middle name? Must find out in order to prepare wedding announcement.)

Why do I love Sean Benedetto? Let me count the top five reasons

1.
His hair rocks, especially the way it sticks up in the back
.

3.
He’s graceful but in a totally boyish way
.

4.
His voice…I can’t describe it but if you poured honey on a hot sandy beach and then went surfing, that’s sort of it
.

5.
He hardly ever looks at me but when he does his brown eyes look like chocolate puddles and I want to dip myself in them
.

Madison’s teacher, Dan Shulman, cleared his throat, and she thought she’d better throw some attention his way. “I hope everybody had a good holiday,” Dan said. “You’re all looking a little bleary this afternoon.”

Fifth period Friday, the end of the first week after Christmas vacation. Who wouldn’t look bleary? And Interpersonal Human Development, in spite of being a long, stupid name for sex ed, wasn’t exactly a shot of espresso.

Pay attention, Mads! Or big bad Dan will yell at you!

Holly Anderson, one of Mads’ two best friends, scrawled that in Mads’ notebook and flashed her a wicked grin. Holly wasn’t paying attention herself—she was secretly doing her Spanish homework. Lina Ozu, Mads’ other best friend, reached over and scribbled,
He will not! Dan never yells
.

Mads straightened up. She and Holly and Lina nodded.

Uh-oh—yelled at by Dan. (For him, that was yelling.) Mads stole a glance at Lina, whose face had gone code red. This must be killing her. She had a monster crush on Dan, almost as big as Mads’ for Sean.

See, I told you you’d get in trouble
, Holly scribbled. Mads batted her hand away.

“If you remember, this semester we’re doing independent study projects,” Dan said. “In this class we’ve focused mostly on the, uh, special relationship between a man and a woman, or a guy and a girl, or sometimes two guys or two girls…”Dan seemed to stumble over the many possible combinations, embarrassed, but he recovered. “Now you’re going to discover how those human dynamics work in real life.”

A “whoo” erupted in class, followed by nervous laughter. “I’m going to check out Rebecca’s human dynamics,” Karl Levine called out. Rebecca Hulse laughed along with everyone else. Nothing seemed to ruffle her.

To Mads, Rebecca was like a mosquito bite on the sole of her foot—irritating yet impossible to ignore. How could she exist in real life? She was smart and skinny and rich and golden-pretty and good at sports and people liked her. Rebecca seemed to belong to a secret race of supergirls. Mads couldn’t figure out where they came from but she wanted to be one
so badly
.

“That’s not what I mean,” Dan said. “Social dynamics, for instance, are one aspect of being human. Can anyone think of a good example?”

“Remember, we talked about this before Christmas,” Dan said. “Do men and women tend to behave differently in social situations? Such as…?” His voice rose, inviting the class to respond. “Anyone?”

Ramona Fernandez raised her ring-covered, black-taloned hand. “On the road. You could analyze the driving records of men and women and see who gets more speeding tickets.”

“Thank you, Ramona,” Dan said. “That would be a good idea for a project. Another example might be lunchtime behavior. What food choices do guys and girls make? Where do they sit in the lunchroom?…”

Mads wouldn’t have thought a goth chick like Ramona, who dyed her hair black, painted her face ghost-white, and wore nothing but filmy Morticia Addams gowns, would go for being teacher’s pet. Just goes to show. Ramona was almost as postal over Dan as Lina was.

There was something very Rosewood about a goth-rebel-teacher’s pet. Rosewood School for Alternative Gifted Education, or RSAGE, was a magnet school for gifted students. Its approach to education was “experimental,” which meant, as far as Mads could tell, lots of independent study and calling your teachers by their first names. You had to pass a test to get in, but in Carlton Bay, California, the test didn’t weed out many kids. Carlton Bay was one of those towns where every kid’s a genius— at least as far as their parents were concerned. And if you weren’t born brilliant, you learned to fake it.

“You can work in teams or alone,” Dan said. “I’ll need to see a project proposal by next Friday and a progress report every week after that. After eight weeks you’ll do a final paper describing the results of your research. That means your paper is due right before spring break. Got it?”

Mads nodded at Lina and Holly. It was understood they were a team. The question was, what would they do for their project?

We’ll figure it out at my house tonight
, Holly scribbled in the margin of Mads’ notebook.

X-l-ent
, Mads scribbled back. Friday night at Holly’s. It was becoming a tradition. But only because none of them ever had anything better to do.

The three girls settled in front of the fire in Holly’s great room, which was big yet cozy, like the lodge at an expensive ski resort. They were eating pizza and drinking a bottle of red wine Holly had swiped from her parents’ cellar. Not that the Andersons cared. They believed that teenagers should be allowed to drink at home, in moderation, like Europeans. That’s what Mads loved about the Andersons—they were so different from her own parents, who veered wildly from overprotective to overindulgent, depending on the child-rearing trend of the moment.

“Curt’s out of town. Jen’s at the opera,” Holly said. “And Piper went to meet some college friends in the city. We’ve got the place to ourselves until at least one or two in the morning.” Piper, Holly’s older sister, was a freshman at Stanford and still home for winter break.

Mads had met Lina and Holly a year and a half earlier, as freshmen at RSAGE. Lina and Holly had been friends since first grade, but Mads went to a different elementary school. She was nervous about starting at RSAGE—her best friend from middle school went to a private school instead. She saw Holly and Lina together and had a feeling about them, kind of like love at first sight. She marched up to them—she wasn’t shy—and said, “You two are missing something. What you need is a third wheel.” They laughed, and that was that. Friends.

“We should be out,” Mads complained. “I can’t believe we’ve got nothing to do on a Friday night
again
. Why isn’t anyone having a party?”

“Someone probably is,” Lina said. “We just weren’t invited.” Lina’s long black hair gleamed in the firelight. She was slender, medium-tall, Japanese-American, with a sweet oval face. At first Mads thought she seemed cool and reserved, but it wasn’t long before she knew the real Lina—a smart girl struggling to keep her passions under control. Mads was emotional, too, but it never occurred to her to try to control it.

“Why wouldn’t we be invited? That sucks.” Mads took a sip of wine and her cheeks immediately flushed red. Wine did that to her, she was learning. Mads and Lina were both fifteen, but Mads looked younger, short and cute with fine black hair to her shoulders, a freckled snub of a nose, and small, sleepy blue eyes.

“We’re supposed to be figuring out what to do for our IHD project, anyway,” Holly said. She stoked the fire. She was good at practical stuff like that—building fires, cooking, giving sensible advice. She didn’t
look
practical, with her long, wavy blond hair and curves like the hairpin turns on the Pacific Coast Highway. She was as busty as Mads was flat. Mads sometimes called her “the Boobmeister” just to tease her.

“How about interviewing our parents?” Lina suggested. “We could compare and contrast the way they dated with dating now.”

“Believe me, you don’t want to get my mom started on that,” Mads said. “She gets all goopy and talks about Dad as if he were some kind of sex god. Which I’d rather not think about.”

“You come up with something then, Mads.”

Mads nibbled on a pizza crust. “I don’t know, we could make an art project out of tampons or something.”

Mads drained her glass. “This wine is making me warm. But I like it.” She waved her glass at Holly. “Dump a little more in here please, Boobmeister.”

Holly poured more wine into each girl’s glass. “Come on, you guys, think!”

Three minutes of silence followed. Mads strained her brain, trying to come up with a good idea.

“Anything?” she asked the others. They shook their heads.

“Maybe we’re trying too hard,” Mads said. “My mother always says, ‘The truth appears when you stop searching for it,’ or something like that.” Mads knew she hadn’t gotten it quite right. “Or maybe, ‘When you stop looking for answers, the answers find you.’”

“Your mom’s such a zen-head,” Holly said. “Do you think an idea is just going to drop out of the sky?”

“All right, we’ll let the answer find us,” Holly said. “But it better find us before next Friday. I’m going to check my e-mail.”

Mads and Lina followed Holly to her room. Holly checked her e-mail—nothing but spam. She was about to log off when Mads said, “Let’s check our horoscopes. They have good ones on girlworld.”

All three girls subscribed to a web site called Your Daily Horoscope, which e-mailed them their personalized forecasts every day, but it didn’t hurt to get a second opinion.

Holly found the girlworld Web site. Before she had a chance to click on “Horoscopes” a colorful pop-up caught Mads’ eye.

New Quiz! What Color Is Your Love Aura?

“Let’s take that quiz,” Mads said. “I have no idea what color my love aura is.”

WHAT
COLOR IS
YOUR
LOVE
AURA
?

• A peck on the cheek

• Lip to lip with a tight pucker

• Lip to lip with a little tongue play

• Nice and wet with lots of tongue

“I know,” Mads said. “But what happens if you pick the grossest answers? What color is the love aura of someone who likes super-wet kisses? I have to know.” The wine had made her a little tipsy, and this suddenly seemed like an important issue.

The Sea is My Brother by Jack Kerouac
The Billionaire's Temptation: Alpha Billionaire Romance (The Billionaire's Touch Book 1) by L.N. Pearl, S.K. Lee
Wasted by Suzy Spencer
Blood Canticle by Anne Rice
A Third of Me by Conway, Alan
Risuko by David Kudler
Faith, Honor & Freedom by Callahan, Shannon
The Summer of Winters by Mark Allan Gunnells
Nothing Short of a Miracle by Henry, Carol
Falling Into You by Abrams, Lauren
Our partner