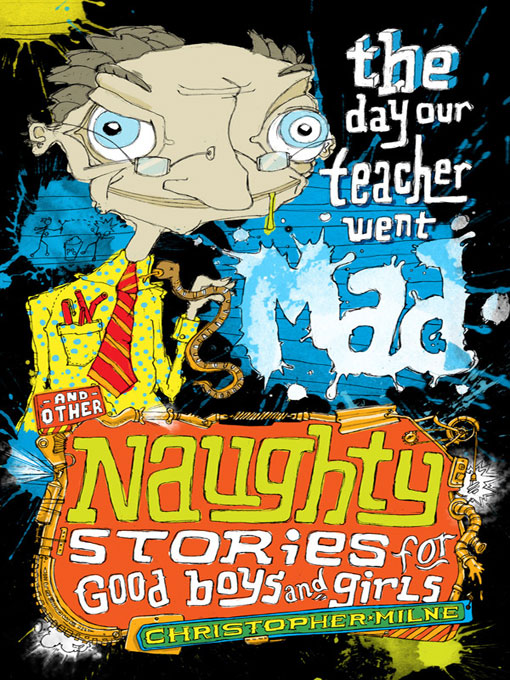 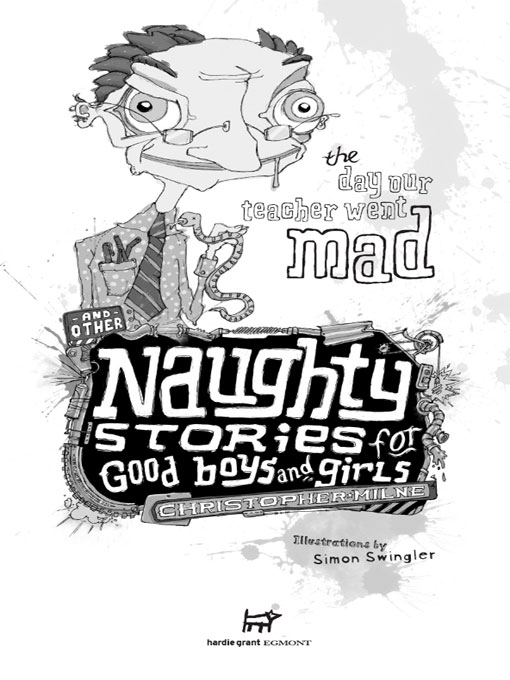 All rights reserved. No part of this publication may be reproduced, stored in a retrieval system or transmitted in any form by any means without the prior permission of the publishers and copyright owner.

Illustration and design by Simon Swingler
Typesetting by Ektavo

The Day Our Teacher Went Mad

The Girls Who Loved the Dark

The Girls Who Ruled the World

The Boy Who Flew to the Stars

The Sleepover of the Century 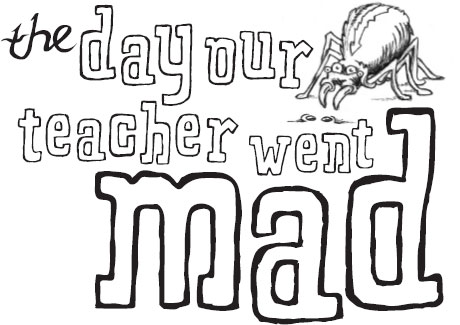 You know how at every school there’s always one class that seems to have heaps of bad kids? All lumped together?

The B stood for
BAD.

Some of us were shockers. ‘Evil,’ my mother said. ‘Especially that Justin Payne. He’s never to come to our house again, do you hear? Your little brother’s never been the same. Fancy telling him that spiders taste like lollies! And making him believe his ears were so big he could fly. What if he’d jumped off the high part of the roof?’

Why so many naughty kids were all together, I don’t know. It just seemed to happen. The badder one kid became, the badder we all became. It was as if we took turns outdoing each other.

Another reason, I guess, was the club.
The Bad Club.
Justin Payne started it. To get into the Bad Club was hard. Really hard. Which for some reason made it seem better. Being a member of the Bad Club became the most important thing in the world.

‘Peer-group pressure,’ my dad called it. Although sometimes I think my dad wouldn’t know his bum from his bald spot.

As I say, joining the Bad Club wasn’t easy. Do you know what we had to do to get in? Initiations.
Tests.

First, we had to chew a live slug, and then we had to drink out of a drain — although we got to choose the drain. Then we had to piggy-back Big Butt Barton twice around the footy ground. Finally, we had to take off all our clothes, balance on one foot and hop past our teacher’s house making chook noises.

I suppose I should have mentioned our poor teacher, Mr Glover, because he was part of the reason we were so naughty. He let us get away with things. Everything, in fact. He could have kicked us out of class any time he wanted, or out of school for that matter. But he always said we were his problem and he would deal with us. 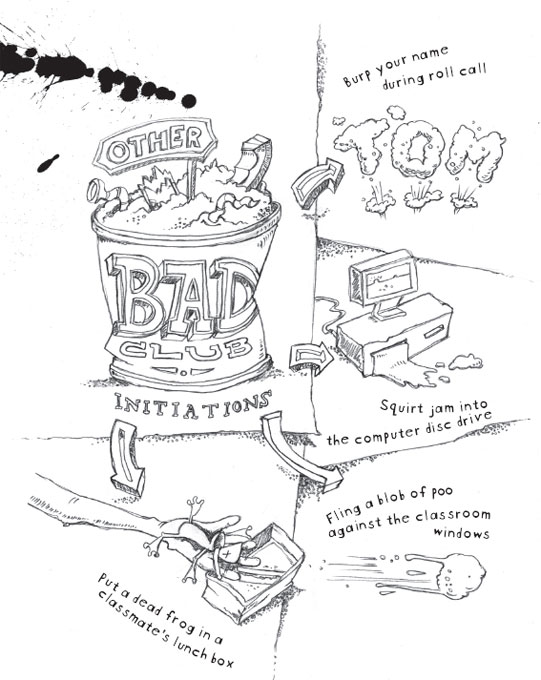 ‘My responsibility,’ he would say.

So really, although we sometimes felt sorry for him, we knew we could never get into trouble. As long as our parents didn’t know, who cared? Sure, we’d get punished at school, like writing lines and stuff, but who bothered to do them? Not me.

So our whole class used to muck around like no class has before. Always calling out, never doing our work, forever playing tricks and teasing each other.

Until one day, Justin Payne had an even better idea — to make mucking around in class a test for the Bad Club. The biggest test of all. If you could make Mr Glover angry — and remember, Mr Glover was used to putting up with a fair bit — you were in. But, whatever you did, it had to be worse than the last kid.

Bruno Carboni was the first. He’d been dying to get into the Bad Club but he couldn’t come at drinking from a drain. Especially after Phillip Prosser said the water he drank seemed to have lumps in it.

‘Why didn’t you spit the lumps out?’ asked Bruno.

So, when Mr Glover turned to face the blackboard, Bruno quietly put his hand in his pocket and pulled out a jar containing the biggest, blackest, hairiest spider I have ever seen. Then, ever so softly, he tipped it onto Rachel Hunter’s head.

Well, do you think that caused a stir? When Rachel felt it crawl onto her forehead she almost had a heart attack. I don’t think I’ve ever heard anyone scream so loudly.

Trouble was, in flicking the spider away, Rachel accidentally hit Teresa Walters right in the ear. And when the spider landed on the floor and crawled up Kate Smith’s leg, the whole room went crazy.

I don’t have to tell you that Mr Glover wasn’t a happy man. Not at all.

‘You idiot!’ he screamed at Bruno. ‘Not only have you frightened the daylights out of half the class, the whole thing could have terrible long-term effects. Some of those poor boys and girls might have nightmares for weeks. Some might be frightened of spiders for the rest of their lives.
The rest of their lives!
How does that make you feel?’

And sure enough, Bruno was let into the Bad Club. Straight away.

So the other kids started doing even worse things, until one day, we thought poor Mr Glover might go mad.

Daniel Clayton was trying to get into the Bad Club by throwing his lunch around the room. Suddenly, Mr Glover raced over to the rubbish bin, tipped the lot on the floor and shouted, ‘Go for it, gang! I just love a good mess!’

None of us could believe it. We just sat there in shock. But that wasn’t all. Mr Glover ran over to his desk, pulled out a
snake
from his drawer and threw it on the floor!

I don’t think I’ve ever seen kids move so quickly. The panic it caused made Bruno’s spider thing seem like a school picnic.

It was a pretend snake, of course, but we weren’t to know that. It certainly looked real.

But I didn’t have time to wonder for much longer, because Mr Glover started firing lumps of cow poo at us with a massive sling-shot.
SPLAT
, right on my forehead! It was still warm, too.

And so it went, one thing after another — until suddenly, he stopped. As if nothing had happened, Mr Glover quietly cleaned up the mess, packed his bag and left the room.

Well,
I thought,
I have seen it all.

Whether Mr Glover really went mad, we’ll never know. But one thing is certain. Our class went from being the worst-behaved to the best. Not because we were scared of Mr Glover. It was just that he’d beaten us at our own game.

He’d been so crazy that day that every naughty idea we had from then on somehow seemed weak. Wussy. The fun of being naughty is shocking people. And how could we shock Mr Glover now?

So we’re still 5B, but the rest of the school calls us something else now.
B for boring.

Kids can be so cruel. 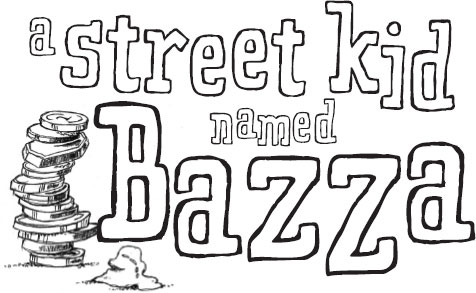 My oldies have always cared about people who aren’t as lucky as themselves. Battlers who’ve got no money, old fogies who are lonely, kids living on the streets.

And instead of just thinking about them, my oldies do stuff. Like having some poor street kid home for the weekend. And telling him he’s welcome to come back any time.

Any time? What about me?!

The street kid idea came from a program where boys and girls who’ve been kicked out of home, or who’ve left and feel they can’t go back, come to stay with a normal family.

Normal? My younger sister’s an idiot. My mum’s so fussy she wants to keep our new lounge chairs clean by leaving them in their plastic wrapping. My dad thinks he’s funny but he’s not. My brother collects insects, hits them with a hammer, and then watches to see if they die or not. And my older sister’s into star signs and tarot cards, so she reckons she can predict the future. I can tell you her future right now.
Total loser. 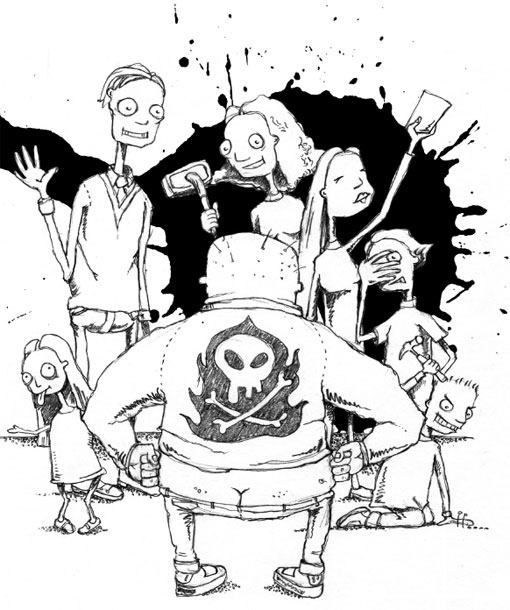 So it was to this ‘normal’ family that poor Barry ‘Bazza’ Marshall was introduced one cold Saturday morning. And I’ve got to say, he sent a shiver up my spine. He looked tough, acted tough and, I’m quite certain, was tough.