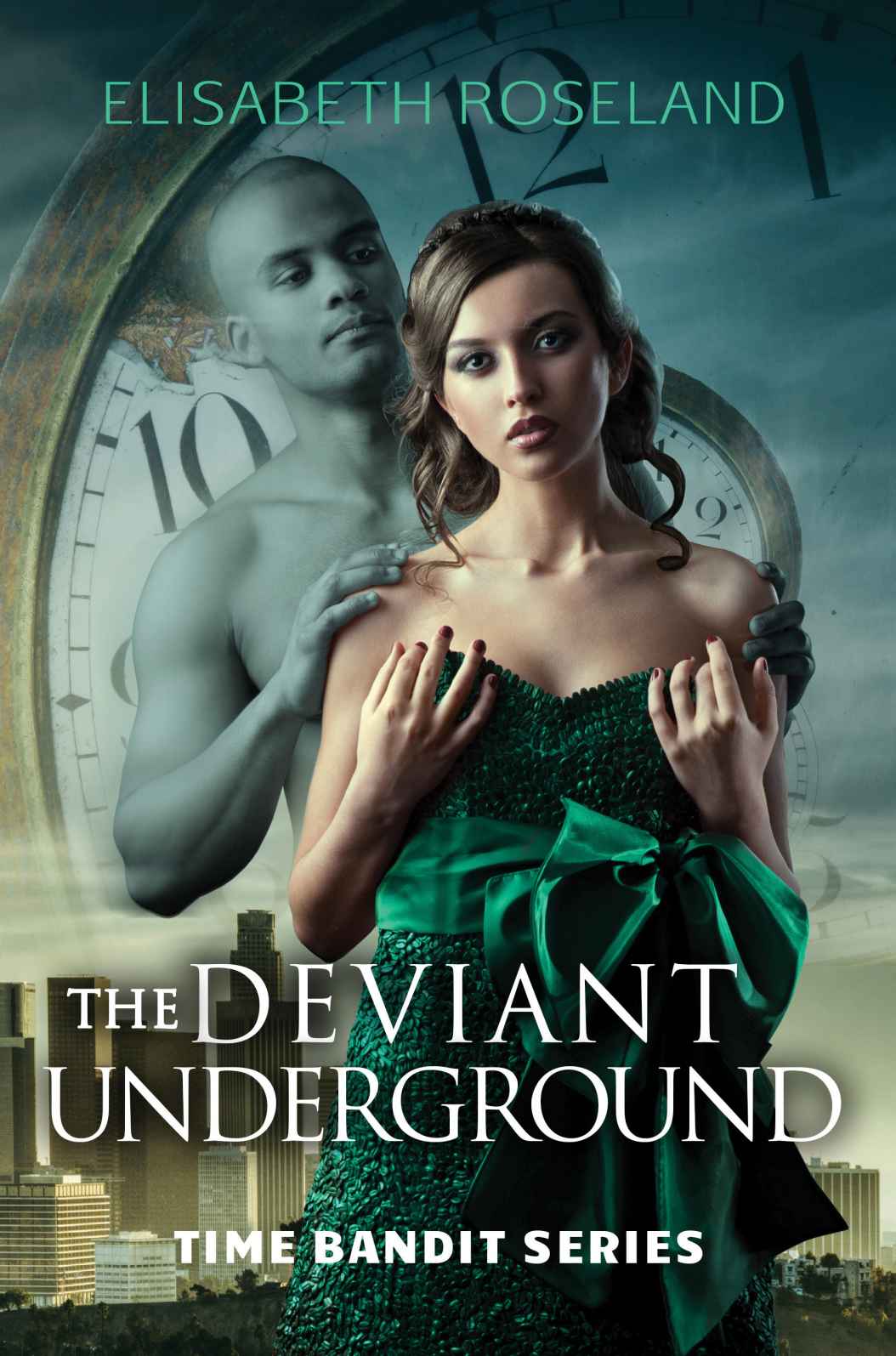 Even with the ability to stop time, you still can run out of it.

Thanks for reading The Deviant Underground.

Please enjoy this excerpt from A Deviant Time, book two in the Time Bandit Series:

Look for these titles by Elisabeth Roseland

Even with the ability to stop time, you still can run out of it.

Kathryn should be institutionalized or incarcerated.

That’s what happens to deviants—people born with unusual abilities. And if the government knew she can teleport and stop time, she can say good bye to her freedom. Not that her life is all that great anyway. Her inability to control her gifts forces her to keep everyone at a distance. Few friends. No meaningful romantic relationships. Until Susan introduces her to Charge, that is.

When the 6’4” guy with the caramel-colored skin and million-watt smile shows up at her door, she lets her guard down. What she discovers is that her best friend and her new lover have gifts of their own, and there’s an entire underground network of undetected deviants living freely in society. Kathryn’s brought into the fold with open arms, and she’s finally found something she’s never had—a family.

But now, people are disappearing.
Some come back weeks later with strange scars, sutured wounds, and missing limbs, with no memory of what happened. Some don’t come back at all.

When Charge becomes the next victim, Kathryn is willing to teleport to the edge of the world to find him, but confronting the mastermind behind the kidnappings puts her life in jeopardy. And when the rescue attempt goes horribly wrong, she wonders if dying might have been a better idea.

Would you like to know when the next book is available?

The large black type screamed at the top of the page.

Kathryn reached down and picked the paper off the rack as she took a few steps forward in the line. Her eyes scanned the page. Words like “contained” and “hostile” and “abomination” jumped out at her as she read how many “undocumented deviants” were restrained and were currently “being held in appropriate facilities where they will no longer be a danger to themselves or others.” Her hands began to shake.

She jumped at the sound of her name, her heart racing. “Oh, um, yeah.” She flashed Rob what she hoped appeared to be a casual, friendly smile. “The usual.” Rob grabbed an extra-large cup and filled it to the brim with piping hot coffee. Kathryn's eyes returned to the page. In the picture, a man and a woman were being led off in handcuffs. Their heads were turned slightly from the camera. They looked scared, defeated, but otherwise, normal. The cops following closely behind them looked victorious.

“What?” The cup of coffee now in front of her, Kathryn forced her attention back on Rob.

“Oh.” Kathryn looked again at the headline. She wanted to read more, to devour every letter, every image, but instead, she turned and dropped the paper back in the rack. “No.” She reached into her purse to pull out her money. “Just the coffee. Thanks, Rob.”

“I don't blame you.” Rob took the bills from her. “Those people are a bunch of dangerous freaks. The cops had this whole sting operation going on and caught like 50 of them! No one knew they were deviants. They had somehow slipped past the screening and were living like normal people with the rest of us.” He made a face as he gave her the change.

“I hope they execute all of them. Damn freaks of nature,” a voice muttered from behind her. Kathryn turned to see a young man in a sharply tailored business suit. His cell phone was clasped firmly in one hand while he deftly texted with his thumb. “You know what I heard?” He pressed a few more buttons before meeting Kathryn's gaze. “I heard that some of them can do some really freaky stuff, like read your mind.”

Kathryn's mouth felt dry. She swallowed hard as her stomach flipped over, grateful it was empty. “That's ridiculous. No one can do that. Deviants are just mentally ill, violent people.”

The man shook his head. “That's what they want you to believe—that they're just crazy. But I'm telling you, some of them can do freaky, unnatural stuff.”

“Dude, I heard that,” Rob chimed in. “Like move things with their minds.”

“Right, which is why they should all be executed, as far as I'm concerned. Damn freaks.” The man turned off his phone and dropped it into his jacket pocket. “I'll take a medium latte.”

Rob nodded. “You got it. See ya tomorrow, Kathryn!” He flashed a sunny grin.

Her voice caught in her throat. “Okay. Bye.”

She grabbed her coffee from the counter, slung her purse over her shoulder, and hurried to the exit. The coffee shop suddenly felt unpleasantly warm, and Kathryn thought she was going to pass out if she didn't get some fresh air. Her vision growing blurry, she swung open the front door and bounced right off someone's chest, almost spilling her coffee over herself.

“Hey, Kathryn!” A friendly voice caught her attention, dragging her out of frenetic escape. It was Susan. Dressed in a pants suit with her blonde hair swept up off of her face, she was clearly on her way to her office.

“Oh, hey, Susan.” Kathryn tried to compose herself. The cool March air felt refreshing, and she took several breaths to clear her head. Fortunately, it worked. “Going to that evil bastion of capitalist money-making where they keep your paycheck?”

Susan laughed and rolled her eyes. “Yeah, you know it. And I take it that you're headed to that glorious ivory tower where they pay you in peanuts and library books?”

Kathryn chuckled. “Bingo.” It felt good to joke around with someone. It was a luxury she rarely had. Kathryn didn't have many friends. She had people she was friendly with and acquaintances she spoke to on occasion, but no real friends outside of Susan. She knew what could happen if she got comfortable and let her guard down around anyone.

Susan gestured to her left. “Well, I'm glad that I ran into you. I want you to meet my friend, Sam.”

Distracted by the coffee shop conversation, her fight to keep her stomach at bay, and her attempt to not lose control over her overflowing cup, Kathryn hadn't paid much attention to the chest she ran into. But now, she tilted her head up and looked into a pair of warm brown eyes.
Oh. My. God.

He was tall. Very tall. 6’3”? 6’4” maybe? Kathryn couldn’t tell for sure, but he seemed to tower over her, and she was 5’9” and wearing heels. Besides being tall, he was also big. Wide. Muscular. His whole presence was larger than life.
Damn. Where did you come from?

When he spoke, she realized it was from somewhere south of the Mason-Dixon line.

He extended his hand. “Kathryn. It's a pleasure to meet you.”

She shifted her coffee awkwardly, readjusted her purse, and slipped her hand into his. His handshake was warm and firm, and his touch immediately erased the tension of the coffee shop conversation and replaced it with more prurient thoughts.

“The pleasure's all mine.” His skin was a rich caramel color. The light blue oxford shirt he was wearing was slightly unbuttoned at the top, and Kathryn could see the beautiful color flowing down his neck and across his shoulders. She wanted to unbutton the rest of his shirt to see more.
No. Forget unbuttoning. Just rip it right off.

“I hope you didn't spill your coffee.”

Kathryn glanced down at her shirt and noted that it was still spotless. “No. I think it's okay. Thanks. So, Sam, getting a little caffeine pick-me-up before a hard day at the office?” Her thoughts turned momentarily to Derrick. Derrick was tall and sexy but nothing like Sam. Not even close.

A slow smile spread across his flawless face, revealing two small dimples and a row of perfectly straight, white teeth. “Something like that, yes.”

“I work for an insurance company.”

Sam laughed. “It's not, but it pays the bills.”

“I hear that.” Kathryn nodded.

Sam fell silent. Kathryn took the moment to simply admire him.
Damn
. She worked hard to keep her face from betraying her thoughts.
He's perfect
. She glanced briefly down at the khaki pants he was wearing and wondered if he looked as good with his clothes off as he did with them on.

The twinkle in Sam's eyes hinted at the fact that her dirty mind was written all over her face. He smiled slightly. “I hope you don't mind me saying this, but Susan was right.”

Kathryn frowned. “What do you mean?”

“You are absolutely beautiful.”

Direct. Politely aggressive. Nice. Very nice.
“Well, since you're Susan's friend, then you must know that she lies.”

She couldn't help smiling. “Well, thank you. But this is all a facade. You should see how I look when I'm at the gym. Totally different person. Like Jekyll and Hyde. Ask Susan. She knows.”

There was a mischievous gleam in Susan's eyes. “You know, I've been meaning to introduce the two of you forever. But Kathryn here is dating some loser—”

She shrugged. “What? You know he is, and you need to dump his ass. Sam and I go way back, and I know he would be perfect for you.”

“Wow.” Kathryn paused. “This is awkward.”

Sam chuckled. It was a sound that sent shivers of desire up Kathryn's spine. “You know Susan. She's not one for subtlety. But I must say that I'm disappointed to hear about your tragic personal situation.”

“Yeah, well, there's a lot to mourn with regards to my personal situation,” she muttered. “Look, I'd love to stay and chat but I've got to go and turn young minds onto the power of education.”

Susan snorted. “Yeah, okay. You go do that.”

“It was a real pleasure meeting you, Kathryn.” Sam's warm brown eyes and irresistible smile made her wish, yet again, that she was normal.
To have a normal relationship would be
—she abruptly stopped her thoughts and pushed back the bitterness with a hard swallow. Sam extended his hand again, and Kathryn took it. This time, however, she didn't allow herself the luxury of reveling in its strong softness.

“Yeah, same here.” She immediately turned and headed down the sidewalk toward her car.

Rayne's Return (Hearts of ICARUS Book 3) by Laura Jo Phillips
The Dragon's Eyes by Oxford, Rain
The Paris Connection by Cerella Sechrist
The Hollows by Kim Harrison
Vienna, 1814: How the Conquerors of Napoleon Made Love, War, and Peace at the Congress of Vienna by David King
Tiffany Street by Jerome Weidman
Regan's Pride by Diana Palmer
Cruel : Stepbrother Billionaire Romance by Payne, K C
Cross-Checked by Lily Harlem
The Ninth Step by Gabriel Cohen
Our partner