Read The End of the World Online 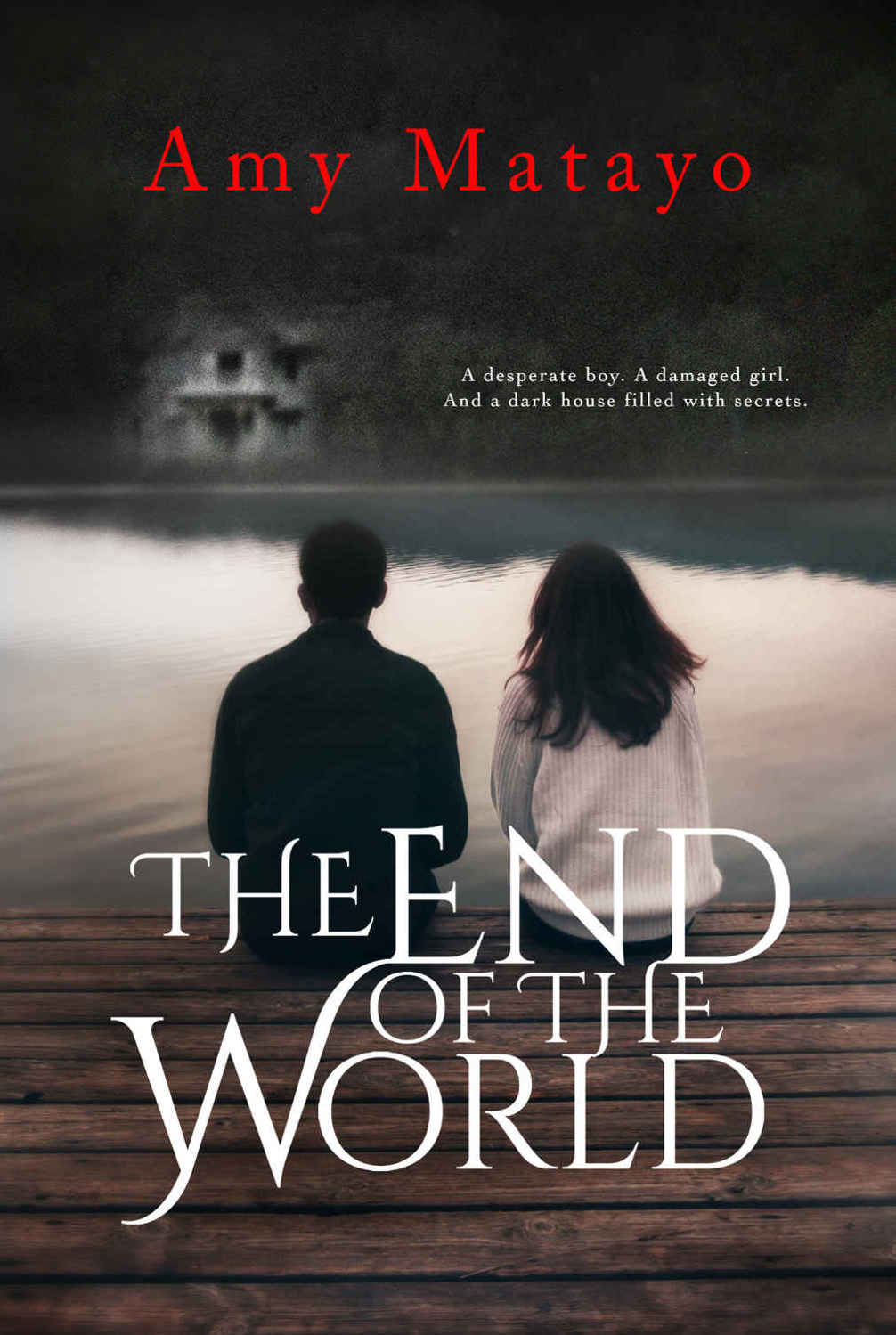 Of a figurative existence

Then collide in an instance

With a dynamic persistence.”

This book is a work of fiction. Name, characters, places, and incidents either are products of the author’s imagination or are used fictitiously. Any resemblance to actual persons, living or dead, events, or locals is entirely coincidental.

You sacrificed more than anyone during the writing of this book

Other Books by Amy Matayo

H
is pen ran
out of ink on the word
corner
. Three lines in, and all he had to show for his effort was a crumpled piece of paper, a tiny hole he’d made in his attempt to get the ink flowing, and a smear mark that resembled a small black river rock. At this point, all he’d managed to get flowing was the side of his hand over the still-wet words he’d already written. So now the word
corner
looked like
comer
—not at all the thought he wanted to convey, but it’s what he was stuck with now. In spite of all his success, he still knew how to screw things up.

Cameron grabbed a stone next to him and sailed it across the surface of the water, watching as it bounced across the waves like a schoolgirl excited about the promise of recess. He’d already skipped a couple dozen in the hour he’d been sitting here. His best hopped nine times before eventually dipping and settling to the bottom of the murky lake, a personal record in all the years he’d been practicing in this particular spot.

And God knew he’d had lots of practice.

Cameron looked up from his paper and studied the view. A family of ducks swam twenty yards in front of him, splashing in the waves as though it wasn’t past their bedtime. A corroded Diet Coke can bobbed up and down near the concrete embankment just beneath his feet. He watched it float on its back, mesmerized by the disappearing and reappearing capital D, as though it wanted to drown itself but kept changing its mind, coming up for air before once again slipping under water. A vicious tug of war between life and death, one Cameron related to. Normally he would stand to retrieve the can and toss it in a bin, eliminating the environment of the unpleasant sight.

But right here right now, he didn’t give a crap. For all he cared, it could release metal toxins into the water for eternity.

The night sky was blacker than he remembered in recent memory, the only light coming from both the thin sliver of moon hanging high above him and the hot glow from his cell phone’s flashlight app that cast a blinding beam onto his lap. The contrast was fitting, matching his erratic mood.

He was both excited and anxious. Hopeful and worried. Nervous like a teenager going on his first date, but calm like a soldier returning home after a lengthy tour of duty. Also appropriate, considering his entire life had been one hard-fought battle after another.

So many years wasted…

He blinked into the open air, jolted back to the present like an old rough tug on his former child-sized arm. He ignored the familiar desire to rub away a phantom pain and shook his head to clear it, unnerved that his mind still managed to revisit the old unwelcome memories. Drawing in a deep breath, he checked the time on his phone; according to her text, Shaye should have been here thirty minutes ago. This was the longest night of his life, considering he’d looked over his shoulder exactly four hundred times since he arrived. Would she show? What if she took one look at him sitting here and walked away? The questions rolled one over another until they snowballed into a giant sphere of apprehension. To temper the sudden fear, he reached for a new piece of paper and fished through his bag for a different pen, then started to write again.

Another half-hour went by before he looked up from his paper. It was finished. Everything he’d wanted to say for years, condensed into twenty lines. It wasn’t perfect, but in the years he’d spent writing professionally, it was the most important thing he’d ever penned. Now all he needed to do was hand it to her. Wait while she read the words. And then she would know.

He didn’t know how she would react or what she would say or even if she would speak at all, but that didn’t matter.

Because she would finally know.

He checked the time again and looked behind him, feeling his heart drop onto his lap. He saw nothing but nighttime everywhere he looked, which could only mean one thing: she wasn’t coming. He hadn’t considered this scenario … hadn’t allowed himself to, not even in the sleepless night leading up to this moment. Despite his accomplishments … despite his career highs that were mixed with very few lows, there was one thing that could bring him to his knees. One thing that would make him consider himself a failure. One thing that could make all he’d worked for seem cheap and meaningless and completely not worth continuing.

If Shaye didn’t show, it’s the one thing he might not survive.

The creak of a wooden plank behind him startled him back to the present. All plans for looking cool and collected fled in an instant as he whipped his head around. His heart pounded like he’d spent every second of his twenty-four years sprinting toward a finish line and only just now made it across.

Shaye. Standing in front of him.

Even through the darkness, he would recognize her anywhere—her chestnut hair with its stubborn strand that insisted on falling across her forehead. Her long arms that wrapped around her midsection like a shield, protecting her from a gentle wind or a violent hit. Her timid smile that curled up on one side but had never entirely broken free unless he told a joke or tickled her under her ribs, the only ticklish spot on her body.

There would be no touching her today. Or tomorrow. Or depending on how tonight went, maybe not ever. But she was here, and for now he took comfort in that fact that everything about Shaye looked the same.

Until she took a step closer.

That’s when he knew that nothing would ever be the same again.

“What if I told you what I’ve been through?

Would you believe me?

Would you look at me differently?

Would you try to save me?”

T
he sun hasn’t
yet dipped under the rooftop of the neighbor’s two-story clapboard house, but the music from Mrs. Miller’s old stereo is already playing by the time the front door slams behind me. Odd, since I’ve never heard the sound so early before. Also odd because it isn’t her traditional Elvis Presley LP that skips through the first half of “Blue Suede Shoes” on such a regular basis that I have the song memorized
without
the missing words. If I ever have to sing the song in its entirety I’ll make an idiot of myself, but then again I have no plans on attending karaoke night at any of the downtown clubs anytime soon. Pretty sure they don’t admit awkward, fourteen-year-old boys like me, anyway.

Tonight the faint strains of early Beatles crackles from her 1950’s record player. I know this because she’s told me the value, quality, and history behind that giant-sized player exactly every single time I’ve been inside her house, which is at least once a day after school for as long as I’ve lived here.

I love Mrs. Miller. I’m going to miss her.

I’ve been here eleven months, twenty days, fourteen hours, and nine…ten seconds. The longest I’ve lived anywhere since the day my mother died exactly nine years, eleven months, twenty-seven days, and twelve…thirteen seconds ago. Not that I’m counting every single second of my life without her. Not that I don’t have time memorized the way some kids memorize fractions.

“You ready to go, dude?” My foster father, a really nice guy named Todd, comes up behind me. He’s holding my bag and pointing me toward his car—a 1998 polished black Ford Taurus that he pampers like a baby, understandable since he and his wife, Shelly, have no babies of their own yet, hence the reason they became foster parents in the first place. I’m their third kid, but after years and years of trying, their first real baby is coming four months from now. A daughter for them—a daughter that seems intent on killing Shelly from the inside out. She’s thrown up every hour on the hour for nearly six weeks now, which means she’ll spend the rest of her pregnancy lying on her left side in their double bed. Which means it’s time for me to leave. Todd works two full-time jobs, and taking care of Shelly just became his third.

“Yeah, I’m ready.”
I’m not.
I’m never ready. I like this place. But it seems this foster system thing isn’t run on popular vote, because no one ever handed me a ballot or placed a pencil in my hand or set me in front of a computer to touch-screen my choice.

I ran out of choices three days ago when they informed me I’d be moving to a new home.

“What about Ms. Mims?” Ms. Mims is my social worker. She’s old—probably at least forty—but she’s nice and she’s still kind of pretty and I don’t mind it too much when she’s around. She always comes with me when I move to a new home. Right now, she isn’t here and there’s no sign of her car—a red sports car that’s as fun to ride in as it is flashy. At least that’s what she drove this time last year. A year can make quite a difference in what a person drives, even if it doesn’t make much of a difference in my prospects for a permanent home.

“She agreed to meet us at the house so I could drive with you myself.”

His statement makes me feel wanted, special for a second. But then I remember he’s getting rid of me, just like everyone else.

I follow Todd down the steps and wait while he tosses my bag into the trunk, then climb in beside him into the passenger seat. Even though I want to beg him to let me stay longer—I’ll sleep on the sofa, I’ll clean up Shelly’s puke myself, I’ll get my own food and shower outside and clean toilets and anything they want if I can just stay.

“I wish you could stay, Buddy. You know that, right?” Todd asks.