Read The Exiled Blade: Act Three of the Assassini Online

The Exiled Blade: Act Three of the Assassini 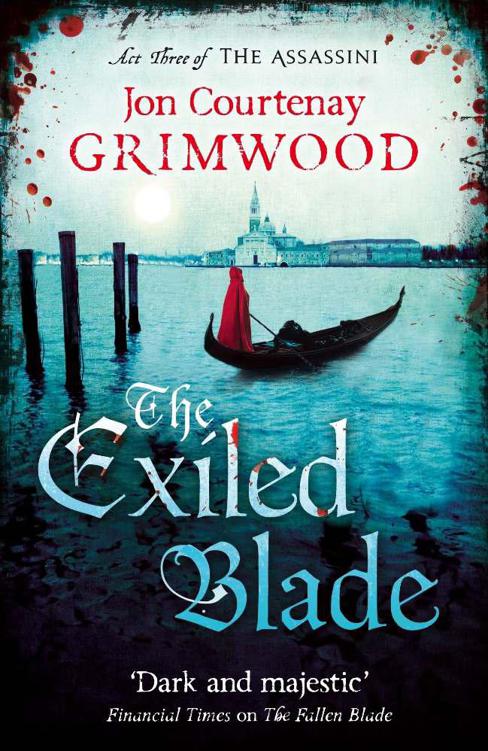 Jon Courtenay Grimwood
was born in Malta and christened in the upturned bell of a ship. He grew up in the Far East, Britain and Scandinavia. For five years he wrote a monthly review column for the
Guardian
. He has also written for
The Times
, the
Telegraph
and the
Independent.

Shortlisted for the Arthur C. Clarke Award twice and the BSFA seven times, he won the BSFA Award for best novel with
Felaheen
, featuring Asraf Bey, his half-Berber detective. He won it again with
End of the World Blues
, about a British ex-sniper running an Irish bar in Tokyo.

His work is published in French, German, Spanish, Polish, Czech, Hungarian, Russian, Turkish, Japanese, Danish, Finnish and American among others. He is married to the journalist and novelist Sam Baker, currently editor-in-chief of
Red
magazine. They divide their time between London and Winchester.

First published in Great Britain in 2013 by Orbit

form or by any means, without the prior

cover other than that in which it is published and

without a similar condition including this

“He’d been proud of her from the moment they met. Her fierce intelligence, the quiet fury with which she met life full on . . .”

For Sam, who shares more with Giulietta than simply red hair

Tycho
, a youth with strange hungers

Marco IV
, known as Marco the Simpleton, duke of Venice and Prince of Serenissima

Duchess Alexa
, the late duke’s widow, mother to Marco IV. A Mongol princess in her own right. She hates . . .

Prince Alonzo
, Regent of Venice, who wants the throne

Marco III
, known as Marco the Just. The late lamented duke of Venice, elder brother of Alonzo, godfather of Lady Giulietta and the ghost at every feast

Members of the Venetian court

Lord Bribanzo
, member of the Council of Ten, the inner council that rules Venice. One of the richest men in the city. Sides with Alonzo

Amelia
, a Nubian slave and member of the Assassini

Prince Frederick zum Bas Friedland
, bastard son of Sigismund, ruler of the Holy Roman Empire, one-time suitor for Lady Giulietta and a guest at the court

Late members of the Venetian court

Atilo il Mauros
, once adviser to the late Marco III, and head of Venice’s secret assassins. Alexa’s lover and long-term supporter. Was engaged to the late Lady Desdaio, daughter of Lord Bribanzo

Dr Hightown Crow
, alchemist, astrologer and anatomist to the duke. Using a goose quill he inseminated Giulietta with Alonzo’s seed, leaving her with child

Iacopo
, once Atilo’s servant and member of the Assassini

Sigismund
, Holy Roman emperor, King of Germany, Hungary and Croatia. Wants to add Lombardy and Venice to that list

John V Palaiologos
, the Basilius, ruler of the Byzantine Empire (known as the Eastern Roman Empire), also wants Venice. He barely admits Sigismund is an emperor at all

Tamburlaine
, Khan of Khans, ruler of the Mongols and newly created emperor of China. The most powerful man in the world and a distant cousin to Duchess Alexa. He regards Europe as a minor irritation

The emperor rode ahead on a high-stepping stallion draped with a cloth of gold, and behind him came his flag bearer, the double-headed eagle of the Holy Roman Empire snapping in the winter wind. A small group of carefully selected courtiers followed wrapped tightly in furs against the early snow. Old men riding down a valley towards a troop of younger men who were the future if they lived long enough.

Sigismund of Germany had come to meet his son.

The emperor was in his fifties, long-facedx and tired eyed, exhausted by the effort of controlling an empire for which he hadn’t provided a proper heir. The boy he approached was a youthful indiscretion. Well, as Frederick was seventeen, perhaps not that youthful on Sigismund’s part, but still an indiscretion.

Gateway (The Gateway Trilogy, Book 1) by Garner, Christina
The Eye of Midnight by Andrew Brumbach
Frost Fire (Frost Series #6) by Gow, Kailin
Runaway (Airhead #3) by Meg Cabot
The Call of the Wild and White Fang by Jack London
The Hurlyburly's Husband by Jean TeulÃ©
All American Rejects (Users #3) by Stacy, Jennifer Buck
The Tao of Natural Breathing by Dennis Lewis
Tom Jones - the Life by Sean Smith
The Dead of Summer by Mari Jungstedt
Our partner