Read The Faded Map: The Lost Kingdoms of Scotland Online

The Faded Map: The Lost Kingdoms of Scotland 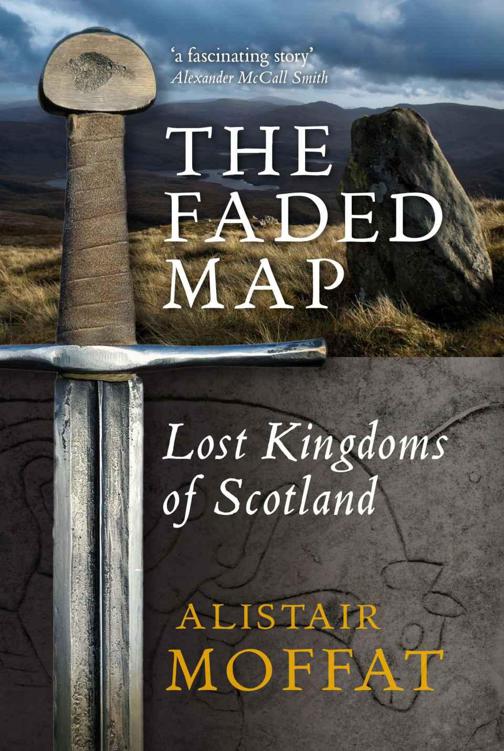 First published in 2010 by Birlinn Ltd

The moral right of Alistair Moffat to be identified as the author of this work has been asserted by him in accordance with the Copyright, Designs and Patents Act 1988

All rights reserved. No part of this publication may be reproduced, stored or transmitted in any form without the express written permission of the publisher.

3 As If Into a Different Island

The site of Flanders Moss

The Antonine Wall at Rough Castle

Bennachie, the site of Mons Graupius

The site of the monastery of Old Melrose 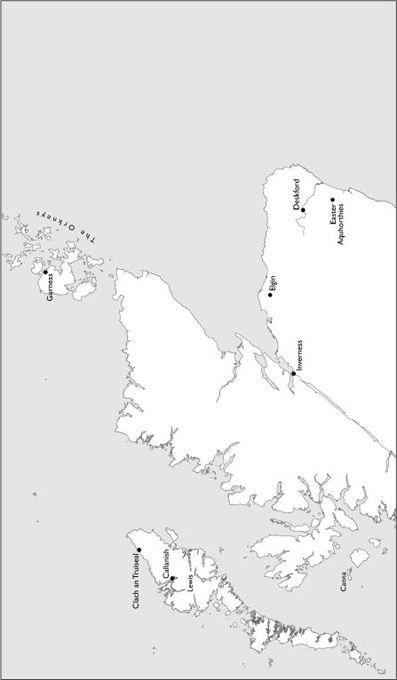 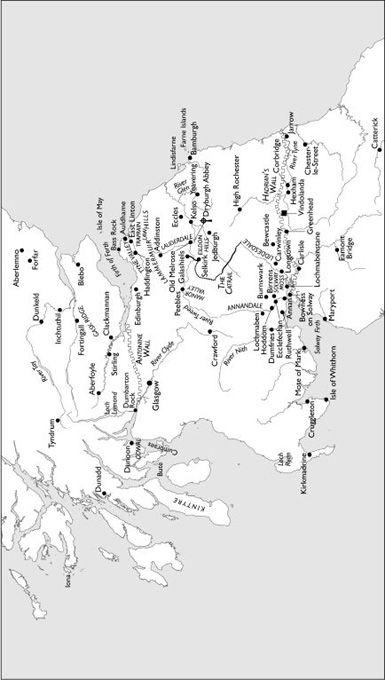 V
ERY LITTLE CERTAINTY
, only occasional phases of continuity and hardly any clarity at all are the sorry string of characteristics to be found everywhere in this book. Scotland or, more precisely, north Britain in the Dark Ages seems a tangle of confusion, a story told in sometimes contradictory fragments and a few rare flickers of light. From late in the last millennium
BC
to
AD
1000 and even beyond, it is a tale of shadows and half-lit edges.

Only the land, its rivers and lochs and the seas around it remain and, although the appearance of Scotland has changed over the course of a thousand winters and a thousand summers since, its fundamental shape and scale have endured. The sands and the tides, the hills and high valleys, the great rivers, the long-lost wildwood, the impenetrable marshlands and the ancient names of places have a rich story to tell. The land has its own certainty, continuity and clarity and, where it can, this book attempts to thread these into the weave of our early history.

Such as it is, much of what we might recognise as a history of Scotland in the first millennium
AD
has been supplied by outsiders. Greek travellers, Roman military historians and map makers, Irish annalists, Welsh bards and chroniclers now thought of as English have left us most of what passes for a narrative in what follows. Much has been lost and often it is the random discovery of an object, the recognition of a piece of dusty
sculpture as great art or the realisation that some of the men of the north of Britain were very influential in their time that reminds us that a lack of a coherent history written by those who lived it is only an accident. Because records did not survive, we should not drift into the unthinking assumption that the society of Dark Ages Scotland was incapable of compiling them and was therefore somehow primitive and less sophisticated than others.

As a further discouragement, it should be made clear at the outset that the principal focus of this book is failure. The losers have, of course, been eclipsed by the winners in the history of Scotland. Excellent treatments of the rise of Dalriada, the Gaelic-speaking kings of the west and their eventual takeover of the whole country exist. And the story of the Pictish kingdoms, one of the great mysteries of our history, has been investigated and exhausted by talented historians. The Scots and the Picts appear in this narrative only when they shed light on the peoples they defeated or subjugated.

Instead a dim light is shed on the forgotten dynasties that died away and failed. Their lost kingdoms are the proper subject of this book. Where were Calchvynydd, Desnes Mor and Desnes Ioan, Manau and the land of the Kindred Hounds? Who were the Sons of Prophecy, the Well-Born, Macsen, Amdarch, the kings of Ebrauc and the treacherous Morcant Bwlc? What happened at Arderydd, Degsastan and Alt Clut? Where were the Grimsdyke, the land of the Haliwerfolc, the sanctuary of St Gordian, the Waste Land and the Raven Fell?

Most of these lost or half-remembered names are to be found in the landscape, overgrown by ignorance, pushed to the margins of our history by events elsewhere. The limitations of this book are all too obvious but its geographical limits require a little explanation. It is principally the ‘faded map’ of southern Scotland, the lands south of the Highland Line. Those lost kingdoms that spoke dialects of Old Welsh are much discussed and the final flourishes of the remarkably resilient Strathclyde Welsh close the narrative. The other significant language of Lowland Scotland
was of course English and a concerted and extended effort is made to assert the Bernicians as one of Scotland’s peoples. The arrival of their language and the glittering achievements of the dynasty of Aethelfrith are seen as a central part of Scotland’s history. Bernicia is a kingdom lost to us in the pages of histories of England.