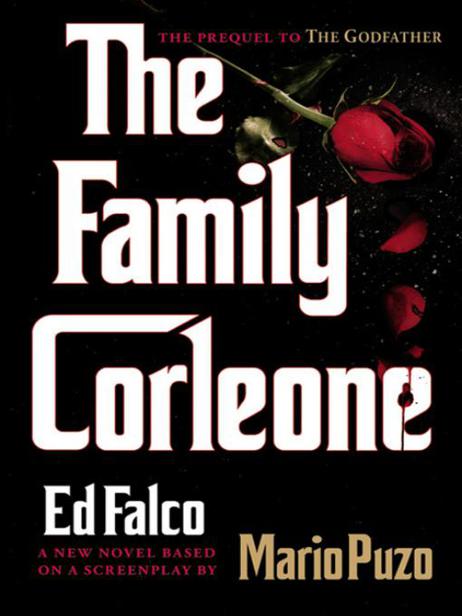 For my father and his family, his six brothers and two sisters, the Falcos of Ainslie Street, Brooklyn, New York, and for my mother and her family, the Catapanos and Espositos, from the same neighborhood—all of whom, the children of Italian immigrants, made good and decent lives for themselves and their families and their children and their children’s children, among whom are doctors, lawyers, teachers, athletes, artists, and just about everything else. And for our neighborhood’s family doctor in the forties and fifties, Pat Franzese, who came to our houses when we were sick and took care of us, often for free or for whatever little might be offered. With love and every good wish and great respect.

GLOSSARY OF ITALIAN EXCLAMATIONS, CURSES, WORDS, AND PHRASES USED IN
THE FAMILY CORLEONE

G
iuseppe Mariposa waited at the window with his hands on his hips and his eyes on the Empire State Building. To see the top of the building, the needlelike antenna piercing a pale blue sky, he leaned into the window frame and pressed his face against the glass. He had watched the building go up from the ground, and he liked to tell the boys how he’d been one of the last men to have dinner at the old Waldorf-Astoria, that magnificent hotel that once stood where the world’s tallest building now loomed. He stepped back from the window and brushed dust from his suit jacket.

Below him, on the street, a big man in work clothes sat atop a junk cart traveling lazily toward the corner. He carried a black derby riding on his knee as he jangled a set of worn leather reins over the flank of a swayback horse. Giuseppe watched the wagon roll by. When it turned the corner, he took his hat from the window ledge, held it to his heart, and looked at his reflection in a pane of glass. His hair was white now, but still thick and full, and he brushed it back with the palm of his hand. He adjusted the knot and straightened his tie where it had bunched up slightly as it disappeared into his vest. In a shadowy corner of the empty apartment behind him, Jake LaConti tried to speak, but all Giuseppe heard
was a guttural mumbling. When he turned around, Tomasino came through the apartment door and lumbered into the room carrying a brown paper bag. His hair was unkempt as always, though Giuseppe had told him a hundred times to keep it combed—and he needed a shave, as always. Everything about Tomasino was messy. Giuseppe fixed him with a look of contempt that Tomasino, as usual, didn’t notice. His tie was loose, his shirt collar unbuttoned, and there was blood on his wrinkled jacket. Tufts of curly black hair stuck out from his open collar.

“He say anything?” Tomasino pulled a bottle of scotch out of the paper bag, unscrewed the cap, and took a swig.

Giuseppe looked at his wristwatch. It was eight thirty in the morning. “Does he look like he can say anything, Tommy?” Jake’s face was battered. His jaw dangled toward his chest.

Tomasino said, “I didn’t mean to break his jaw.”

“Give him a drink,” Giuseppe said. “See if that helps.”

Jake was sprawled out with his torso propped up against the wall and his legs twisted under him. Tommy had pulled him out of his hotel room at six in the morning, and he still had on the black-and-white-striped silk pajamas he had worn to bed the night before, only now the top two buttons had been ripped away to reveal the muscular chest of a man in his thirties, about half Giuseppe’s age. As Tommy knelt to Jake and lifted him slightly, positioning his head so that he could pour scotch down his throat, Giuseppe watched with interest and waited to see if the liquor would help. He had sent Tommy down to the car for the scotch after Jake had passed out. The kid coughed, sending a spattering of blood down his chest. He squinted through swollen eyes and said something that would have been impossible to make out had he not been saying the same three words over and over throughout the beating. “He’s my father,” he said, though it came out as
’E mah fad’
.

Giuseppe knelt beside Tomasino. “Jake,” he said. “Giacomo. I’ll find him anyway.” He pulled a handkerchief from his pocket and
used it to keep his hands from getting bloody as he turned the kid’s face to look at him. “Your old man,” he said, “Rosario’s day has come. There’s nothing you can do. Rosario, his day is over. You understand me, Jake?”

“Good,” Giuseppe said. “Where is he? Where’s the son of a bitch hiding?”

Giacomo tried to move his right arm, which was broken, and groaned at the pain.

Tommy yelled, “Tell us where he is, Jake! What the hell’s wrong with you!”

Giacomo tried to open his eyes, as if straining to see who was yelling at him. “ ’E mah fad’,” he said.

“
Che cazzo!
” Giuseppe threw up his hands. He watched Jake and listened to his strained breathing. The shouts of children playing came up loud from the street and then faded. He looked to Tomasino before he exited the apartment. In the hall, he waited at the door until he heard the muffled report of a silencer, a sound like a hammer striking wood. When Tommy joined him, Giuseppe said, “Are you sure you finished him?” He put on his hat and fixed it the way he liked, with the brim down.

“What do you think, Joe?” Tommy asked. “I don’t know what I’m doing?” When Giuseppe didn’t answer, he rolled his eyes. “The top of his head’s gone. His brains are all over the floor.”

At the stairwell, atop the single flight of steps down to the street, Giuseppe stopped and said, “He wouldn’t betray his father. You gotta respect him for that.”

“He was tough,” Tommy said. “I still think you should’ve let me work on his teeth. I’m telling you, ain’t nobody won’t talk after a little of that.”

Giuseppe shrugged, admitting Tommy might have been right. “There’s still the other son,” he said. “We making any progress on that?”

“Not yet,” Tommy said. “Could be he’s hiding out with Rosario.”

Giuseppe considered Rosario’s other son for a heartbeat before his
thoughts shifted back to Jake LaConti and how the kid couldn’t be beaten into betraying his father. “You know what?” he said to Tomasino. “Call the mother and tell her where to find him.” He paused, thinking, and added, “They’ll get a good undertaker, they’ll fix him up nice, they can have a big funeral.”

Tommy said, “I don’t know about fixing him up, Joe.”

“What’s the name of the undertaker did such a good job on O’Banion?” Giuseppe asked.

“Get him,” Giuseppe said, and he tapped Tommy on the chest. “I’ll take care of it myself, out of my own pocket. The family don’t have to know. Tell him to offer them his services for free, he’s a friend of Jake’s, and so on. We can do that, right?”

“All right,” Giuseppe said. “So that’s that,” and he started down the stairs, taking the steps two at a time, like a kid.

S
onny settled into the front seat of a truck and tilted the brim of his fedora down. It wasn’t his truck, but there was no one around to ask questions. At two in the morning this stretch of Eleventh Avenue was quiet except for an occasional drunk stumbling along the wide sidewalk. There’d be a beat cop along at some point, but Sonny figured he’d slink down in the seat, and even if the cop noticed him, which was unlikely, he’d peg him for some mug sleeping off a drunk on a Saturday night—which wouldn’t be all that far from the truth since he’d been drinking hard. But he wasn’t drunk. He was a big guy, already six feet tall at seventeen, brawny and big-shouldered, and he didn’t get drunk easily. He rolled down the side window and let a crisp fall breeze off the Hudson help keep him awake. He was tired, and as soon as he relaxed behind the wide circle of the truck’s steering wheel, sleep started to creep up on him.

An hour earlier he’d been at Juke’s Joint in Harlem with Cork and Nico. An hour before that he’d been at a speakeasy someplace in midtown, where Cork had taken him after they’d lost almost a hundred bucks between them playing poker with a bunch of Poles over in Greenpoint. They’d all laughed when Cork said he and Sonny should leave while they still had the shirts on their backs. Sonny’d laughed too, though a second earlier he was on the verge of calling the biggest Polack at the table a miserable son-of-a-bitch cheater.
Cork had a way of reading Sonny, and he’d gotten him out of there before he did something stupid. By the time he wound up at Juke’s, if he wasn’t soused he was getting close to it. After a little dancing and some more drinking, he’d had enough for one night and was on his way home when a friend of Cork’s stopped him at the door and told him about Tom. He’d almost punched the kid before he caught himself and slipped him a few bucks instead. Kid gave him the address, and now he was slumped down in some worn-out truck that looked like it dated back to the Great War, watching shadows play over Kelly O’Rourke’s curtains.

Naked Submission by Trent, Emily Jane
The Arrival: A Sci-Fi Alien Warrior Paranormal Romance by Ashley West
Red Chrysanthemum by Laura Joh Rowland
Topspin by Soliman, W.
Down to a Soundless Sea by Thomas Steinbeck
A Texas Sky (Yellow Rose Trilogy) by Lori Wick
Angel of Death by Jack Higgins
Free Fall by Jill Shalvis
Some Day Somebody by Leger, Lori
The Great Scot by Donna Kauffman
Our partner