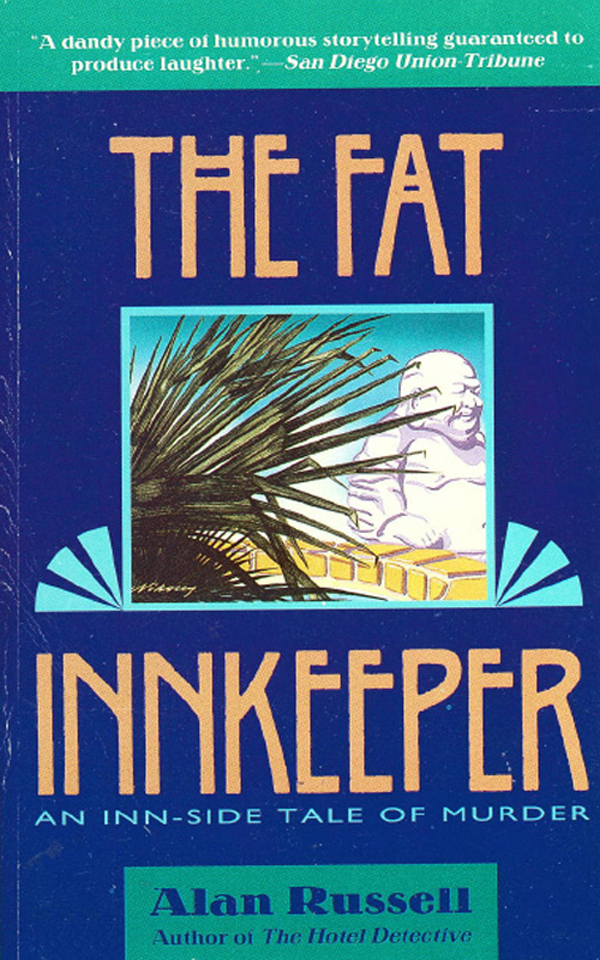 CHECK IN FOR MYSTERY MURDER, AND LAUGHS…

“He’ll end up with tales so cleanly and dazzlingly told, they’ll be dangerous.”

“THE FAT INNKEEPER makes Alan Russell one of the best of the comic detective novelists.”

“A rapid-flowing, almost seamless story that is replete with humorous situations and some pithy observations…. Well-written
and very funny.”

“Am Caulfield… is charming, witty, and appealing.”

“The characters are reminiscent of masters like Hiaasen.… Am’s east-vs.-west meeting with the new management is terrific.”

“Screamingly funny.… This is the second in Russell’s Am Caulfield series and it is even better than the first,
The Hotel Detective
.”

OTHER NOVELS BY ALAN RUSSELL

To the memory of my mother, Carolyn Lois Falconi Russell. and to the grandson she never got the chance to spoil, Hart Crane
Russell.

Check in for Mystery Murder, and Laughs…

Other Novels by Alan Russell

A Winner of the Critic’s Choice and Lefty Awards

The Hotel California’s mailer had announced: Grunion Fun! There were a lot of things about the promotion Am Caulfield didn’t
like. Most Americans, he was sure, were as suspicious of exclamation points as he was. And just how much hype did a two-ounce
toothless fish merit? These weren’t killer whales or great white sharks or smiling dolphins—these were grunion.

Grunion wouldn’t look too out of place in a sardine can, but they distinguish themselves from other fish in ways that humans
find fascinating (or at least a subspecies of humans—Southernus
californicatus).
Birds do it, and bees do it, but not like grunion. The fish come ashore to spawn on California’s and Mexico’s coastal beaches,
with the height of the so-called grunion runs occurring in April and May. Spring is announced in San Diego not by an explosion
of greenery, or a rise in temperature, but by the pronouncement of grunion runs. Local news, always hard-pressed to make exciting
weather forecasts, invariably turns to grunion-run prognostications to use up air time. The grunion visits are predictable
in that they occur only at night during the full moon, and happen within several hours of the evening’s high tide.

As a native San Diegan, Am had grown up as a surf rat and experienced his share of grunion runs. He had watched the curious
and the hopeful turn out to the beaches, had even tried to snatch a few grunion (it is legal to catch grunion with your hands,
but about as easy as holding on to a greased pig). Nature’s display usually brought families, the adults content to hunker
around fire rings to wait for the fishy fireworks, their children running around laughing and screaming.

That, in Am’s mind, was how it should be, but it certainly wasn’t that way tonight, at least not along the stretch of beach
in front of the Hotel California known as the La Jolla Strand. What marketing had done was to turn something special into
a three-ring aquarium. Not that reality has ever stood in the way of any good promotion. The Hotel’s mailer had allowed a
few paeans to nature, but basically promised sex on the beach, and plenty of it.

Those in the hotel business often try to claim a kinship with show business. Though Am believed the relationship between hotels
and show business was overstated (at least on the hotel end—it wasn’t as if he had ever heard Robert Redford or his ilk going
around saying, “Acting is very much like the hotel business”), he still wasn’t one to discount the two cardinal rules of performance:
You never follow an animal act, and you never count on Mother Nature. When first informed about Grunion Fun! Am had pointed
out the potential dangers of violating not one, but both of those rules. The marketing people had not been inclined to listen
to his warnings. What was the security director of the Hotel doing critiquing their work? Why wasn’t the man trying to track
down lost towels? In so many words they told Am to “go fish.”

Over two hundred guests of the Hotel California were trying to do just that. They had taken the promotion’s bait, but the
grunion weren’t cooperating. For hours now, the guests had been waiting for the grunion, assured that the fish did indeed
have reservations. Bermuda shorts and dark socks didn’t identify the guests as out-of-towners, but their “official” grunion
catching equipment, which consisted of complimentary neon buckets, flashlights, and Greek fishing caps emblazoned with the
Hotel logo, did advertise that they weren’t locals. Zen question, thought Am: Who are the real fish?

It was clear the guests were beyond restless. They had come for fun. They had paid good money for fun. And hadn’t fun been
promised? Wasn’t that how the weekend had been advertised? After “cavorting with nature,” after watching “the wet and the
wild,” there was supposed to be a
fabulous fish fry. (“We
like grunion,” the brochure had gushed, “especially with onion.”) The participants had been primed for a spectacle, for the
“the slippery, sliding, spawning grunion” (there had been fold-out pictures to prove it). The veritable piscine orgy had been
played up like the goings-on of a Bangkok brothel. To Am’s mind, the scribed spectacle of fish writhing in the sand brought
up visions of
From Here to Eternity.
He was surprised that “Love Is a Many Splendored Thing” wasn’t being piped out to the beach.

The May fog was rolling in a lot faster than any grunion. The pimple on San Diego’s mostly perfect climate is that a marine
layer likes to hang around the coast for much of May and June, what the locals call “June Gloom.” It’s not something the Chamber
of Commerce is likely to promote, but if you pine for London fog, you need only to travel to San Diego during late spring
or early summer.

“Damn fog,” complained one of the Hotel’s grunion runners. “Getting so we won’t even be able to see the fish. That is if they
do
turn up.”

There were a few surly grunts of agreement. Am was glad the fog had grown thick enough to obscure his identifying Hotel blue
blazer and name tag. You call weather information, you get a recording. You find a hotel employee, you have an ear to complain
to.

“Where are those fish?” groused another would-be grunion runner.

“Fish,” shouted a voice (the fog was getting thicker by the moment—so the caller had become just that, a voice, and a neon
bucket), mimicking the call of a fishmonger. “Hey, fish!”

Another voice took up the call, and then another. “Fish,” everyone started calling, “Fish.”

Waiting for Godot this wasn’t. It must have looked quaint from the Hotel California’s four restaurants: the fog rolling in,
the revelers on the beach with their pant legs rolled up, and the flashlights probing the incoming waves in search of the
elusive grunion. From Am’s perspective, it had the makings of a riot.

Enough voices had now joined in with the calling to challenge the roar of the surf. But the chorus wasn’t quite loud enough
to drown out all sounds.

Mary Mason (aka Typhoid Mary) was the Hotel’s social director. In another life she had to have been the activity director
for the
Titanic.
With the ship sinking, she had likely suggested that everyone gather for snow cones.

“Grunion Fun!” said Am through clenched teeth. “There are few enough natural phenomena in Southern California, if you discount
earthquakes and mudslides. This all seems very wrong to me.”

Why did this promotion bother him more than others? Hotels, even venerable hotels like the Hotel California, resorted to such
fanfare to keep heads in beds. Given any holiday, even an obscure one, the Hotel had some event. There were promotions offered
for Groundhog Day (“Who cares about some woodchuck’s shadow? Get rid of your own shadows with a complimentary facial in our
spa”) to Guy Fawkes Day (special prices on English beer and a fireworks display that ended with a bang). The Hotel had Easter
Bunny Hops, and Santa arriving on a surfboard. You do those kinds of things when you are trying to fill 712 rooms 365 days
a year. And when you run out of holidays, you scratch your head and create events. Last week someone had suggested, half-seriously,
a Muzak-appreciation festival.

“You’re a party pooper, Am Caulfield.”

“Apparently I’m not the only one. The grunion aren’t coming.”

“No one guarantees when the grunion will arrive,” said Mary. “There’s just an ETA.”

She sounded like a flight attendant. It was probably a position to which Mary had aspired. He could feel the jet nose-diving,
could picture Mary still offering earphones for the in-flight movie.

The chanting had changed, and to Am’s ear, not for the better. The raucousness was gone, replaced by something different,
something deeper, something more dangerous. Grunion Fun! had probably appealed to the same kind of crowd that would have turned
out for a witches’ Sabbath. The calling was slower now, and more insistent. It sounded like a summoning.

“Maybe next year we should try Grunion Gun!” said Am. “MI we need is an NRA mailing list and a few hundred handguns. The object
will be for everyone to shoot at the fishies as they come ashore.”

Mary ignored Am’s grousing, but finally awakened to the chanting all around her, the voices crying out from the fog. A little
defensiveness (or was that fear?) crept into her Pollyanna voice: “I don’t know what everyone is getting so antsy about. There’s
still the fish fry whether anyone catches any grunion or not.”

The banquet was to take place in the Montezuma Room, with the evening to be highlighted by a reading from
The Old Man and the Sea.
To Am, it was all about as natural as mauve shoes.

The voices were coming into their own, like a pack of howling dogs harkening back to an age before rubber bones and squeak
toys. There was something primeval about the chant. The Druids probably chanted like that. From grunion run, thought Am, to
a gathering of the neophyte occult.

The offshore breeze picked up. It had been blowing out, but now the wind was pushing back at them. Mary had lined the beach
with tiki torches. They were by no means Am’s favorite prop, but he wasn’t altogether happy to see them blown out. Clouds
and the fog obscured the full moon; suddenly the street-lamps lining the boardwalk couldn’t be seen. Am’s senses were short-circuited.
It felt as if he was on the set of a Halloween slasher movie. He caught glimpses of the fluorescent pails. Pushed by the wind,
they looked like dancing will-o’-the-wisps. Shrouded beams of flashlights ineffectively challenged the fog, weakly signaling
more than illuminating.

Sweet Haven (The Sweet Series Book 2) by K.C. Lynn
The Black Stallion's Blood Bay Colt by Walter Farley
The Rapture: A Sci-Fi Novel by Erik, Nicholas
Not Your Father's Founders by Arthur G. Sharp
Pulled to the Dark (The Siriena Series) by Julia P. Lynde
Brent Acuff - Undead Nation 01 by Outbreak
Render Unto Caesar by Gillian Bradshaw
King of the Corner by Loren D. Estleman
Rest For The Wicked by Cate Dean
Debris by Kevin Hardcastle
Our partner