Read The Fat Man in History and Other Stories Online

The Fat Man in History and Other Stories 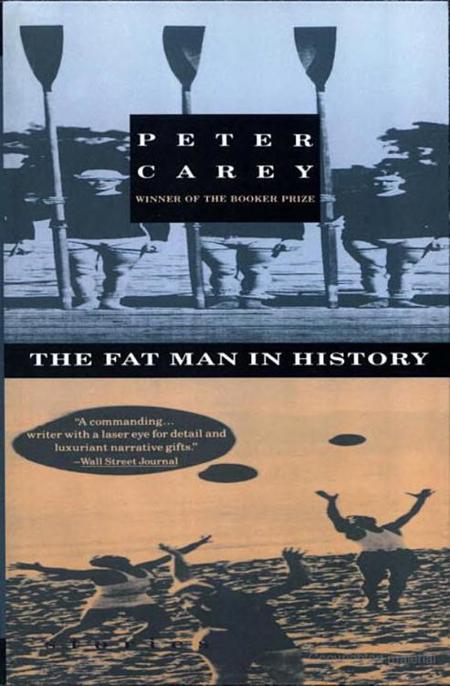 “The creator of some of the oddest characters in recent fiction … Carey’s work has a wild, chance-taking quality … in harmony with the spirit of this age. If he keeps on as he has, he will prove to be one of its finest novelists.”

“Peter Carey is to Sydney what Joyce was to Dublin … an absolute master of language and of storytelling. Get your money on him as one of the great figures on the cusp of the millennium.”

“To say that Carey’s brand of story-telling falls somewhere between the fabulistic experiment of the 1960s and the ultra-realism of the ’80s might be helpful, but it is not exactly fair. It is more accurate to say that he works a literary territory all his own, combining elements of absurdism, black humor, social satire and old-fashioned family saga … a pleasure.”

“Carey’s antic worlds recall the pop art landscapes of Kurt Vonnegut and Thomas Pynchon in their clownish instability, their subservience to a cruel destiny. Beneath [his] hallucinogenic prose lurks the menacing sight of a satirist on the edge—a metaphysical joker. His flair for the unexpected but telling simile … and his powers of mordant description remain fresh.”

“[Carey] changes your eyesight. He sucks you into a world that has nothing to do with anything or anyone you ever knew and leaves you forgetting that you ever knew another.”

The Fat Man in History

The Puzzling Nature of Blue

The Last Days of a Famous Mime

A Windmill in the West

The Fat Man in History

His feet are sore. The emporium seems endless as he shuffles an odd-legged shuffle with the double-bed sheets under his arm. It is like a nightmare—the exit door in sight but not coming any closer, the oppressive heat, the constant swarm of bodies flowing towards him like insects drawn towards, then repelled by, a speeding vehicle.

He is sweating badly, attempting to look calm. The sheets are badly wrapped. He wrapped them himself, surprising himself with his own nerve. He took the sheets (double, because there were no singles in blue) and walked to the wrapping counter where he pulled out a length of brown paper and set to work. To an assistant looking at him queryingly he said, smiling meekly, “You don’t object?” The assistant looked away.

His trousers are large, floppy, and old-fashioned. Fortunately they have very large pockets and the pockets now contain several tins of smoked oysters. The smoked oysters are easy, always in big tubs outside the entrance to the self-service section. He has often wondered why they do this, why put them outside? Is it to make them easier to steal, because they are difficult to sell? Is it their way of providing for him and his friends? Is there possibly a fat man who has retained his position in the emporium? He enjoys himself with these theories, he has a love of such constructions, building ideas like card-houses, extending them until he gets dizzy and trembles at their heights.

Approaching the revolving door he hesitates, trying to judge the best way to enter the thing. The door is turning fast, spewing people into the store, last-minute shoppers. He chooses his space and moves forward, bustling to get there in time. Deidre, as tiny and bird-like as she always was, is thrown out of the revolving door, collides with him, hisses “slob” at him, and scurries into the store, leaving him with a sense of dull amazement, surprise that such a pretty face could express such fear and hatred so quickly.

Of course it wasn’t Deidre. But Alexander Finch reflects that it could have been. As he sadly circles inside the revolving door and walks slowly along the street he thinks how strange it is that the revolution should have produced this one idea that would affect his life so drastically: to be fat is to be an oppressor, to be greedy, to be pre-revolutionary. It is impossible to say if it arose from the people or was fed to them by the propaganda of the revolution. Certainly in the years before the revolution most fat men were either Americans, stooges for the Americans, or wealthy supporters of the Americans. But in those years the people were of a more reasonable mind and could accept the idea of fat men like Alexander Finch being against the Americans and against the old Danko regime.

Alexander Finch had always thought of himself as possessing a lovable face and figure. He had not thought this from any conceit. At school they had called him “Cuddles,” and on the paper everyone called him “Teddy” or “Teddy Bear”. He had signed his cartoons “Teddy” and when he included himself in a cartoon he was always a bewildered, rotund man with a large bum, looking on the antics of the world with smiling, fatherly eyes.

But somehow, slowly, the way in which the world looked at Alexander Finch and, in consequence, the way Alexander Finch looked at himself, altered. He was forced to become a different cartoon, one of his own “Fat Americans”: grotesque, greedy, an enemy of the people.

But in the early days after the revolution the change had not taken place. Or, if it had, Finch was too busy to notice it. As secretary of the Thirty-second District he took notes, recorded minutes, wrote weekly bulletins, drafted the ten-day reports to the Central Committee of Seventy-five, and still, somehow, found time to do a cartoon for his paper every day and to remember that General Kooper was spelt with a “K” and not a “C” (Miles Cooper being one of the infamous traitors of the revolution). In addition he was responsible for inspecting and reporting on the state of properties in the Thirty-second District and investigating cases of hardship and poverty wherever he found them. And if, during these early days, he occasionally became involved in unpleasant misunderstandings he regarded them as simply that, nothing more. People were accustomed to regarding all fat officials as either American or Danko men, because only the Americans and their friends had had enough food to become fat on. Occasionally Finch attempted to explain the nature of glandular fat
and to point out that he wasn’t a real official but rather the cartoonist “Teddy” who had always been anti-Danko.

Finch was occasionally embarrassed by his fatness in the early days when the people were hungry. But, paradoxically, it wasn’t until the situation improved, when production had reached and passed the pre-revolutionary figure and when the distribution problems had finally been more or less ironed out, that the fat question came to the fore. And then, of course, food was no problem at all. If anything there was a surfeit and there was talk of dumping grain on the world market. Instead it was dumped in the sea.

Even then the district committees and the Committee of Seventy-five never passed any motions directly relating to fat men. Rather the word “fat” entered slyly into the language as a new adjective, as a synonym for greedy, ugly, sleazy, lazy, obscene, evil, dirty, dishonest, untrustworthy. It was unfair. It was not a good time to be a fat man.

Alexander Finch, now secretary of the clandestine “Fat Men Against The Revolution,” carries his stolen double-bed sheets and his cans of smoked oysters northwards through the hot city streets. His narrow slanting eyes are almost shut and he looks out at the world through a comforting curtain of eyelashes. He moves slowly, a fat man with a white cotton shirt, baggy grey trousers, and a slight limp that could be interpreted as a waddle. His shirt shows large areas of sweat, like daubs, markings deliberately applied. No one bumps him. At the traffic lights he stands to one side, away from the crowds. It seems to be a mutual arrangement.

The sheets under his arm feel heavy and soggy. He is not sure that he has gotten away with it. They may be following him still (he dares not look around), following him to the house, to discover what else he may have stolen. He smiles at the thought of all those empty cans of smoked oysters in the incinerator in the back yard, all those hundreds of cans they will find. And the beer keg Fantoni stole. And the little buddha he stole for Fantoni’s birthday but somehow kept for himself, he felt so sorry for (or was it fond of?) the little fat statue. He accuses himself of self-love but reflects that a little self-love is tonic for a fat man in these times.

Two youths run past him, bumping him from either side. He assumes it was intentional but is uncertain. His whole situation is like that, a tyranny of subtlety. To be fired from his job with the only newspaper that had been continually sympathetic to Kooper and his ideas for “slovenliness” and “bad spelling”. He had laughed out
loud. “Bad spelling.” It was almost a tradition that cartoonists were bad spellers. It was expected of them and his work was always checked carefully for literals. But now they said his spelling was a nuisance and wasteful of time, and anyway he was “generally slovenly in dress and attitude”. Did “slovenly” really mean “fat”? He didn’t ask them. He didn’t wish to embarrass them.

Milligan’s taxi is parked in front of the house. The taxi is like Milligan: it is very bright and shiny and painted in stripes of iridescent blue and yellow. Milligan spray-painted it himself. It looks like a dodgem car from Luna Park, right down to the random collection of pink stars stencilled on the driver’s door.

Behind Milligan’s taxi the house is very still and very drab, painted in the colours of railway stations and schools: hard green and dirty cream. Rust shows through the cream paint on the cast-iron balcony and two pairs of large baggy underpants hang limply from a line on the upstairs verandah.

It is one of six such houses, all identical, surrounded by high blocks of concrete flats and areas of flat waste land where dry thistles grow. The road itself is a major one and still retains some of its pre-revolutionary grandeur: rows of large elms form an avenue leading into the city.

Winter Fire: A Red Hot Winter Story by Jess Dee
The Return of the Tycoon by Kate Lambert
Chains of a Dark Goddess by David Alastair Hayden
Jade Sky by Patrick Freivald
Shirley by Burgess, Muriel
JOHNNY GONE DOWN by Bajaj, Karan
The Boy Who Came Back from Heaven: A Remarkable Account of Miracles, Angels, and Life Beyond This World by Kevin Malarkey; Alex Malarkey
Kiss Is a Four-Letter Word by Erin M. Leaf
Stone Cold by Evers, Stassi
One Good Soldier by Travis S. Taylor
Our partner