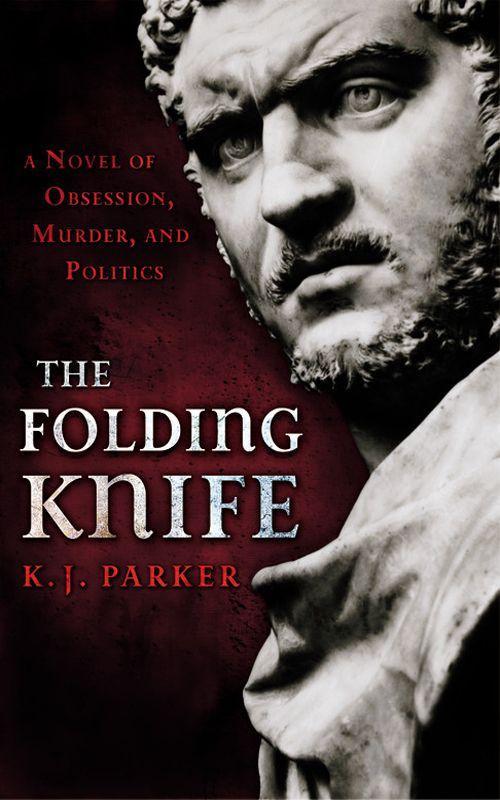 Praise for the Novels of
K. J. PARKER

"I have reviewed books before that I thought might someday be found to have achieved greatness... K. J. Parker is writing work after work that demands to be placed in that category."

"Blends gritty military fantasy with the 18th-century 'island story' tradition.... Parker carries the reader on a headlong gallop to the powerful conclusion."

"Imagine
Lost
meets
The Italian Job
... a masterfully planned and executed book, one that builds on ever-revealing characterization and backstory, leading slowly yet inexorably to its final conclusion."

"It's a dark, bleak and fiercely intelligent portrait of the human condition..."

"The whole thing is brilliant--disturbingly so, since these fantasies (without a whit of magic) explore the human condition and reveal it all, brain, heart, guts and bowels, with a startling precision."

"Parker's intricately plotted and meticulously detailed book... moves as deliberately and precisely as an antique watch."

"An audacious, utterly captivating novel... Parker's prose glitters with intelligence and precision... one of the most entertaining novels I've read this year."

"K. J. Parker is more of a hurricane than a breath of fresh air."

"It's a splendid story, full of turmoil and conspiracy."

"As efficient and well constructed as its protagonist's well-oiled machines."

Colours in the Steel

The Belly of the Bow

Orbit is an imprint of Hachette Book Group. The Orbit name and logo are trademarks of Little, Brown Book Group Limited.

A Preview of
The Company

"His life is gentle, and the elements

So mixed in him that nature might stand up

A man is sitting on the roof of a coach, crawling through a dusty plain. He wears an expensive coat, dirty and stained, and ruined good shoes. Next to him, avoiding conversation, sit a liveried porter, an armed man and a gloomy individual in a faintly comic footman's outfit. In front of them there's an impressive pile of luggage, trunks and cases and chests, secured to the rail with strong rope. The coach rolls over a stone and all four men sway precariously.

The man in the dirty coat looks down at his fingers, notices a hangnail, drops his right hand into his pocket and fishes out a beautiful gold-handled folding knife. He finds it awkward to open; there's something wrong with his left hand, the fingers are stiff and it doesn't work properly. He trims the nail, but then the coach hits another stone and lurches wildly. The folding knife flips out of the man's hand. He makes a wild attempt to catch it as it falls, gets two fingers on it, fumbles the catch. The knife slips out of his grasp, hits the rail, bounces off and flies over the edge of the roof.

The man stares for a moment at where the knife suddenly isn't. Then he shouts, "Stop the coach."

"I said, stop the damn coach," the man shouts. Nobody reacts.

The man scrambles up, sways with the motion of the coach, forfeits his balance and lands ingloriously on his backside. The armed man, some kind of guard, grins at him.

The man looks over his shoulder. By now, the coach has moved on some thirty or forty yards; even if he hurls himself off the roof without breaking his leg or his neck, his chances of finding the knife are too slim. It's gone, and that's that. Also, he recognises and concedes that he's not the man he once was. Until very recently, any order he chose to give would have been obeyed without question; now, nobody even hears him. The folding knife has gone, as quickly, suddenly and irrecoverably as someone dying.

The man--if any of his three companions on the roof had thought to ask him his name, he'd have lied to them--closes his eyes. As soon as he does so, a moment from the past fills his mind. It always does, the same image, the same moment, every time his eyes close. Twenty years.

He sees a bed, in a well-furnished room. On the floor beside it lies a naked man, face down, holding a fancy costume dagger. His throat has been cut. On the bed there's the body of a woman, and her throat's been cut too, but she lies face upwards; her lips are still moving, but her eyes are just taking on that cold, hard look. If a speck of dust were to land on them, or a fly, they wouldn't blink. He sees her through a red blur, because the blood from her jugular vein spurted in his face. In his right hand he feels the handle of the folding knife.

(Always the same, always there. By now, surely, it should be familiar enough to be invisible. Once, when he was extremely rich, he'd bought a painting by one of the great masters. He'd hung it on the wall opposite his bed, so it'd be the first thing he saw when he woke up. A man could never get tired of looking at this picture, they reckoned. In its perfectly inclusive lines, its total sublimation of symmetry and asymmetry, it contained every possibility in the world. After a week, he stopped noticing it was there. A month later, he sold it, made a profit, and had a mirror put in its place, as a form of punishment.)

The woman's lips stop moving, part-way through an unvoiced word, and then she just falls sideways, like a piece of furniture carelessly knocked over. Her head cracks against the leg of the bed, making a wooden sound, like a stick hitting a ball.

He hears his name spoken; not his name, a word equally familiar, amounting to the same thing. Oh, he thinks, and turns round. Twin boys, about seven years old, stand in the doorway, looking at him.

For some reason, he folds up the knife and puts it back in his pocket. "Go to your room," he says. "Now."

Neither of them moves. They stare at him, and it occurs to him that the look on their faces must be very much like the look on his own, when he'd first entered the room.

(Still there, he thinks, and still the same; interesting. Surely, by now, that should have been the least of my problems.)

He opens his eyes.

On the morning of the day when Basso (Bassianus Severus, the future First Citizen) was born, his mother woke up to find a strange woman sitting at the foot of her bed.

Her husband was away somewhere on business, and the servants slept downstairs. The woman was dirty and shabby, and she was holding a small knife.

Over the woman's shoulder, Basso's mother could see that the skylight had been forced. She was shocked. It had never occurred to her that a woman could climb a drainpipe.

Basso's mother assessed her. About her own age, though she looked much older; a foreigner, most likely a Mavortine (blonde hair, short, fat nose, blue eyes); there were always Mavortines in the city at that time of year, seasonal workers. She was wearing the remains of a man's coat, several sizes too big.

"I'm terribly sorry," Basso's mother said, "but I don't have any. My husband doesn't let me have money. He does all the..."

The woman made a strange grunting noise; frustration and annoyance, all that work for nothing. "I'm sorry," Basso's mother repeated. "If I had any money, I'd give it to you." She paused, then added, "You look like you could use it."

The woman scowled at her. "What about downstairs?"

Basso's mother shook her head sadly. "All the money in the house is kept in my husband's iron chest," she said. "It's got seven padlocks, and he carries the keys about with him. The servants might have a few coppers," she added helpfully, "but it's nearly the end of the month, so I doubt it."

The woman was holding the knife rather than brandishing it. Basso's mother guessed she'd used it to work open the skylight catch. It was a folding knife, an expensive item, with a slim blade and a gold handle; the sort of thing a prosperous clerk would own, for sharpening pens.

"If you're that hard up," Basso's mother said, "you could sell your knife. It must be worth a bit."

The woman looked at it, then back at her. "Can't," she said. "If I went in a shop, they'd know it was stolen. I'd be arrested." She gasped, then burst into a noisy coughing fit that lasted several seconds.

Basso's mother nodded. "So jewellery wouldn't be much use to you either," she said. She was feeling sick, but managed to keep her face straight and calm. "All I can suggest is that you help yourself to some decent clothes. The dressing room's next door, just there, look."

The woman was looking at her, considering the tactical implications. "Shoes," she said.

Basso's mother wasn't able to see the woman's feet. "Oh, I've got plenty of shoes," she said. "I think a pair of good stout walking shoes would be the most useful thing, don't you?"

The woman started to reply, then broke out coughing again. Basso's mother waited till she'd finished, then said, "I'm sorry about the money, but at least let me get you something for that cough. How long have you had it?"

The woman didn't answer, but there was an interested look in her eyes. Medicine clearly didn't feature in her life. Basso's mother pushed back the sheets and carefully levered herself out of bed and onto her feet. She didn't bother putting her slippers on.