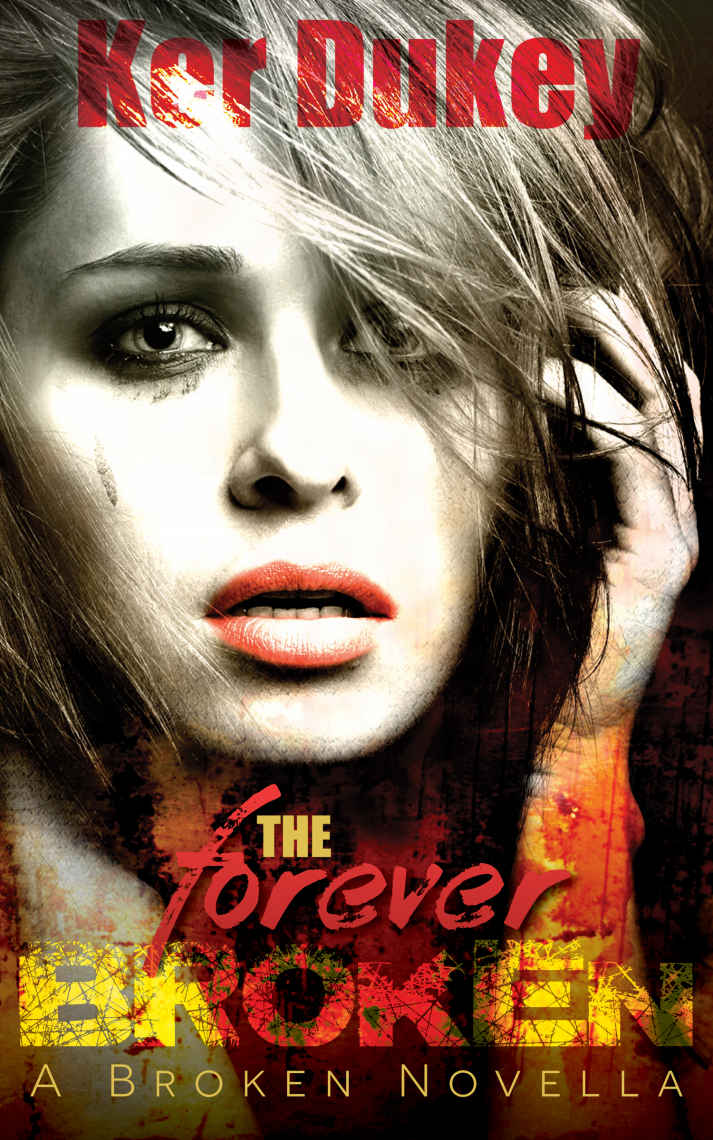 All rights reserved. No part of this book may be
reproduced or transmitted in any form without written permission of the Author.

This book is the work of fiction any resemblance to any
person alive or dead is purely coincidental. The characters and story are
created from the Author’s imagination. Any shared files without the author’s
permission will be subject to prosecution.

This title deals with depression and acts that can be
triggered by depression. If you are sensitive to these issues please read with
caution.

Dedicated to the Broken people.

Hopeless dreams in shrouded vision call to me without
permission.

Simple tests that I fail at my best mock me with the
own beat in my chest.

Taunts and ridicule haunt me with my own screaming
voice… failure is a given, not a choice.

Cut, burn, twist and peel, but still I do not feel.

Trapped inside the prison of my mind even when I’m
awoken,

Can’t you see that I’m broken
?

We need to talk or I’ll talk to DJ.

I read the text and delete it. Mikey had caught me and it
wouldn’t be long before the whole fucking family knew and everything changed.

I was an asshole. I don’t deny it. But no matter how often
I told myself to stop, I couldn’t. I was weak. DJ would fucking flip if he knew
and it would ruin our friendship. I can’t bear to think about not having him as
my best friend. We grew up inseparable. He will never forgive me if he finds
out that I’m seeing both Quinn and Sophia, his twin siblings.

Even if it was just one of their hearts I was playing
fire with, it would be bad enough, but I’d really messed up this time and
gotten involved with them both.

DJ sees us all as related because of our parents’
closeness and the fact we were raised pretty much like family. He was so mad
when Mikey and Arya’s relationship came to light.

He doesn’t understand the pull though. The undeniable
attraction that grows and blossoms between people who love each other.

I loved them both, and that love manifested into more. I
was going to have to end it with both of them or risk hurting everyone. But
knowing you have to do something and actually doing it were two different
things.

This was a nightmare. I couldn’t eat or fucking sleep
lately, worrying constantly that they would find out and it would cause a rift
between them both and us. I didn’t want to be the cause of them turning on each
other if this mess came to light. They were always close, even if they appeared
to be going in their own direction lately. They were brother and sister and
that was a bond I should never have fucked with. I was a piece of shit.

“You haven’t eaten any of that. Are you feeling okay?”
Mom asks, feeling my forehead and then my cheeks with the back of her hand like
I’m still a child.

“I’m fine Mom, just not hungry.” I grumble, moving her
hand from my head.

“He’s love sick, and I know how he feels,” Dad bellows,
coming into the dining room and sweeping Mom off her feet, causing her to giggle
like a teenager.

“God, aren’t you too old for that shit now?” I moan and
get smacked on the head by Dad.

“Love sick. Really?” Mom asks, going back to what Dad
said when he walked in. It’s only when she repeats it that I pay attention to
what he actually said. My stomach bottoms out as I wait for him to elaborate.
Had
Jasper spoken to him?

“I saw him with a pretty little thing earlier, she didn’t
appear as favorable to him mind you.”

What the hell was he talking about?

“She’s just playing hard to get, Baby. Who couldn’t fall
for my boy?” Mom coos, pinching my cheek.

“I have no idea who he’s talking about, Mom, so don’t get
excited.”

Grabbing my plate from in front of me and taking the seat
opposite, Dad shoves a forkful into his mouth and speaks around it. “Glasses,
blonde hair.”

Oh God, he means Jillian. I was asking her if DJ had
still been going over there to study. She’s not a fan of mine after I made fun
of DJ for having to hang out with her knowing it’s the most time he’s ever
spent with a girl without getting his cock polished.

She wasn’t impressed with my crude demeanor, which is
fucking hilarious considering DJ was a lot worse than me, and she appeared all
defensive of him when I asked her if he appeared okay.

“This is so good,” Dad adds, scoffing the rest of my food
into his mouth.

“I thought she was cute.” He shrugs.

“If your father thinks she’s cute why don’t you ask her
out?” Mom asks, sliding onto Dad’s lap. “He clearly has excellent judgment.”
She grins down at him, gaining a beaming smile from him in return. Damn they
were sickening.

I know the only reason I feel like this is because I want
to have what they have, out in the open with the twins. But that could never
happen. My love life is a fucking mess and the last thing I needed to witness was
my mom and dad being sickly in front of me while trying to fix me up with DJ’s
geek.

“I’m going to lay down!” I bark, screeching the chair
over the floor as I stand.

“Don’t you have class?” Mom asks but I wave my hand over
my shoulder as I exit the dining room.

I did have class but I wasn’t going to go, I didn’t want
to bump into either twin. The fact we all went to the same college also made my
life a misery. I was paranoid of getting caught with one of them when we’d
sneak off to fool around during class breaks. Our campus wasn’t that big so bumping
into each other was likely. The only saving grace was the fact we were all
great friends before anything turned sexual, so unless I was walking down the
hall with my tongue down Quinn’s throat, or my hand up Sophia’s skirt, no one
would question us spending a lot of time together.

Fuck, now I’m thinking about putting my hand up Sophia’s
skirt. I was a one-way ticket to hell.

My insides are screaming at me, clawing at the flesh
beneath the skin as I look over at Miles Cross. He keeps smirking at me and
it’s making me want to crawl out of my skin and evaporate into the air.

I hated myself; I hated what I’d done. Every time I look
in the mirror I hate the reflection looking back at me.

Had I always been this way
?

Since the night you whored yourself. Slut.

It was more than just that night; deep down I know that,
it was the reason that night even happened. The night I gave away my virginity
and don’t even remember it happening.

Ever since I can remember I’ve never felt whole, I don’t
know why… there is no real reason. I have a wonderful family, parents who would
do anything to ensure my happiness, yet there was something missing inside me
that no one could complete, or fill.

My twin brother Quinn was the complete opposite to me, he
always felt whole in his skin, or at least he portrayed that. He was confident
and content with whom he was, happy and proud of his sexuality and I envied him
in the shadows of his greatness.

He shone like a bright star, lightened every room he
stepped into, and I prayed one day I would feel just a glimmer of what he did.
But it has never come.

My sister Arya and Mya, practically our sister, find so
much happiness in dance, and although I have been twirling on my toes the same
amount of years they have, I’m only half the talent they both are. I don’t get
the freedom from dancing that they appear to gain and it makes me want to tear
their hair out.

I would give anything to feel the freedom from the
world, from my mind forever dragging me down into darkness. I don’t know why it
is I feel so hollow inside. Maybe everyone feels this way and we’re all walking
around with fake smiles and facades to mask the loneliness that no one can
gratify.

I’ve tried everything to feel …Something …Anything.

And now it’s resulted in me feeling ashamed of myself
just to feel some emotion.

I’d done things that I hate myself for but I couldn’t
give up how it made me feel despite the regret, hurt and shame the next day.

And now I was caught up in a situation that could hurt
people I loved. Quinn… Blaydon. What would he do if he knew what I let Miles do
to me? Things had changed between Blaydon and me ever since the night I walked
into the cinema room to see him and my brother Quinn making out. I almost lost
my breath and dropped the glass I was holding. I had no idea Blaydon liked
boys. Quinn had always been open with me about his sexual preference, but
Blaydon was known for liking girls, lots and lots of girls.

They looked so passionate and intense together. Quinn was
floating on air for the entire week following that night. I wanted to feel what
Quinn was experiencing…just for once.

So a week later I made it so Blaydon and me were alone
together, and I made my move. He was reluctant at first but I could be
persuasive. He cracked when I took off my shirt, braless underneath. He was
gentle and treated me like I would break. It was nice and I liked how I felt
when he touched me, so I craved more of it, despite knowing he gave the same
thing to my brother.

I was a little upset that Quinn had kept him and Blaydon
a secret, he used to share everything with me but now there were secrets
between us, a void, one similar to the void inside me.

“There’s another party this weekend if you want to come?”

Miles smirks over at me, pulling me from my thoughts. I
force myself to look at him and keep the bile at bay long enough to raise an
eyebrow. I will go though, because feeling repulsed is better than feeling
empty.

Blaydon thought he was my first, he thought I was a good
girl. He was so wrong about that.

Miles smirks in my direction. I went with him and his
friend at the same time at a party last night. I felt ashamed and dirty, I
couldn’t bear to face myself in the mirror, and having those feelings would get
me though today and tomorrow, they may even last for the week but the
hollowness would soon return and I’d need to seek out feeling anything but the
emptiness again.

“See you tonight then,” I tell Miles before going back to
doodling on the text I’d just written out.

I don’t want to stay but I won’t leave.

I don’t want your touch but it’s something I need.

I hate that feeling when you’re inside me,

Parts of me, parts of him, memories of everything.

Take me quick, kill me slow it doesn’t matter which
way I go.

If I speak my mistakes, will you forgive my errors?

My sex is dirty; my sex is wrong.

Will my sex always leave scars?

The walls are closing in,

My will growing thin.

I need the agony; I need to feel the shame.

I’ll just lay there while you use me like the rest.