Read The Fun We've Had Online

The Fun We've Had 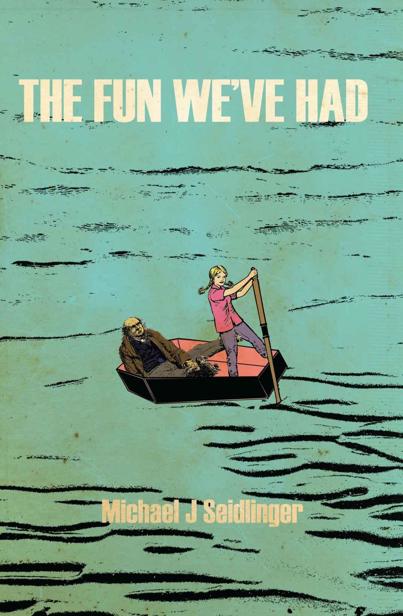 THE FUN WE’VE HAD

“Michael Seidlinger is a homegrown Calvino, a humanist, and wise and darkly whimsical. His invisible cities are the spires of the sea where we all sail our coffins in search of our stories.”

“Melding the static, high-concept premise of two humans floating alone on a coffin in a sea devoid of all else with stark and meditative prose,
The Fun We’ve Had
evokes a highly unexpected experience, somewhere between Beckett’s most hopeless solipsists and the mysterious energy of a child’s Choose Your Own Adventure-era dream.”

—
BLAKE BUTLER
, author of
There Is No Year
and

“Michael J Seidlinger writes with the kind of weird, wonderful, joyful abandon that reminds the reader that the world is still the great unknown. In
The Fun We’ve Had
, he examines the long blank space between life and death, fills it with love and loss and boats made of coffins, with people clinging to life and using the weight of the past as ballast. This is a fun read, true; but it’s also a true read, and that’s what makes it so beautifully sad.”

—
AMBER SPARKS
, author of
The Desert Places
and
May We Shed These Human Bodies

“The best poets are writing poetry no matter what they are writing, creating entirely new and weird spaces. There is no doubt Seidlinger has made one of the weirdest spaces we will ever inhabit. In
The Fun We’ve Had
, every visible thing is a love of disturbing tremors, keeping ahead of our ever-curious eyes, hoping to savor every line. What a magnificent book.”

—
CA CONRAD
, author of
The Book of Frank

“It is obvious that Michael J Seidlinger had a great deal of fun writing
The Fun We’ve Had
. What more could a reader ask for?”

“Seidlinger’s imagination is a sea unto itself, the reader riding these rollicking waves. This book will have you clutching pages as though they’re life vests. Fans of Calvino and Shelley Jackson will dig the slow submerge into this crazy romp.”

“Ready for an analogy? Here goes: When you need to give a dog a pill, you don’t just jam it down his throat, you wrap that pill in something yummy, like, say, ham. Michael J Seidlinger understands that this principle extends to people and books. So he’s got this pill he wants you to swallow, right? That pill is the truth about love and death and strife and, more generally, the messy mysterious business of being human, and also of being nothingness. Pretty heavy, right? Big old horse pill. But then Seidlinger, no fool, wraps it in the yummy slow-smoked maple goodness of his humor. He obviously had a fine time writing this book, which is precisely the reason you’ll have a fine time reading it.”

THE LAUGHTER OF STRANGERS

“
The Laughter of Strangers
delivers a combination of psychological horror and strangeness that would not be out of place in a David Lynch film. Seidlinger’s weird new fight fiction suggests that perhaps the best place for boxing contests isn’t in the ring but between the pages of a book.”

“Unexpectedly, Michael J Seidlinger has given us the boxing novel of the year.
The Laughter of Strangers
is a tough and gritty book that will challenge you page after page, but it is oh so worth it.”

“Seidlinger’s stripped down prose resembles a boxer that possesses both graceful footwork and devastating power: it’s rough and fast, but given to bursts of eloquence, humor, and philosophy.”

“Michael J Seidlinger’s
The Laughter of Strangers
is vicious and unforgettable. Willem Floures’s search for meaning in a world that keeps knocking him off his feet is as gritty and enthralling as a fight.
The Laughter of Strangers
destroyed my expectations of what a boxing novel can be. Seidlinger is charting new narrative territory, and we should follow him wherever he goes.”

—
LAURA VAN DEN BERG
, author of
The Isle of Youth

“The bare-bones prose within
The Laughter of Strangers
is heartbreaking, bleak, and stays with you long after finishing the book. This one should not be ignored.”

All persons in this book are fictitious, and any resemblance that may seem to exist to actual persons living or dead is purely coincidental. This is a work of fiction. 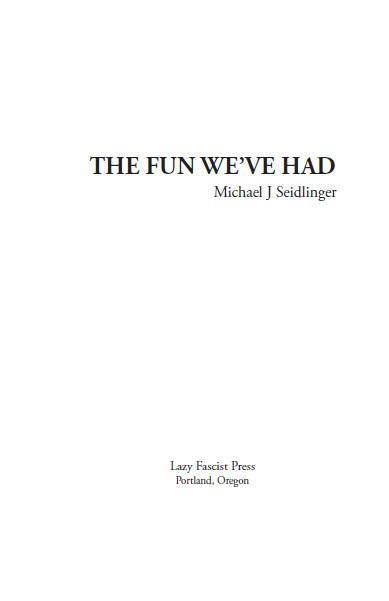 We were here before anywhere else, and it is why they returned to tempt the seas, swimming against the current, fighting the engulfing waves. Each wave is its own feeling, rhythmic crashing of those that resist the tides. We are all here, and it is only now that we understand.

The waves are hellos.

The incoming storm is the sincerest goodbye.

Like every single one of us, they held on.

We held on until we could no longer hide. No one can hide out at sea. The current felt is something that only the quickening heartbeat, the quick-to-react being, can adjust.

We go with the current.

We are the current.

We want to say hello.

One wave tapped the side of their coffin while another nearly tipped the coffin over. We were way too excited. We are always excited to greet new voices. Though we may shout, they can only hear the sound of water deepening their descent.

Some hold on longer than most.

She held onto her potbelly, trapped in that tired, middle-aged body. He tried his best to fight us, unaware of the fact that we are here to help. We directed them toward the calmest part of the sea. We brought them in so that we could rock them slowly to their final sleep. Ease them in…

With each gulp of water they became more like us.

He wanted to fight us with one oar and the weak, frail body of a young girl. She was with us. She’s been with us for quite some time. He fought, wanting to hold on.

They were only harming themselves.

We are here, waiting for time to kick back in.

The ocean has no clear end. The waves push and pull as we do our best to remember who we once were.

Every single voice used to walk bodies across lands untold; each voice is a source of experience.

There’s no telling what kind of fun we’ve had.

But we try. If you can listen into the sound of the seas, calm and raging, a contradiction based on the billions that populate its depths, you’ll hear us shouting, doing our best to tell our stories.

Holding on, they believed they had a chance.

We push them toward the calmest part of the sea, beyond the dangerous waters, for the moment when they would sink.

Eventually we all sink.