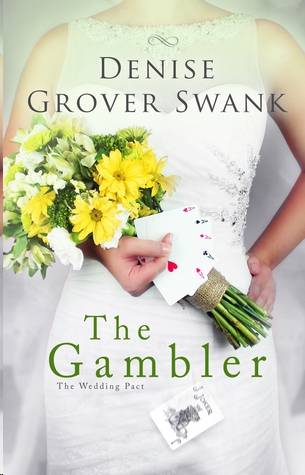 This book is a work of fiction. References to real people, events, establishments, organizations, or locations are intended only to provide a sense of authenticity, and are used fictitiously. All other characters, and all incidents and dialogue, are drawn from the author’s imagination and are not to be construed as real.

Formatting: Dallas Hodge,
Everything But The Book

Libby St. Clair believes in fate—so much so, she’s willing to pin everything on a curse a fortune teller placed on her and her two best friends when they were kids. The curse, that each of them will marry before thirty, have a disaster of a wedding, and end up with a man other than her original fiancé, has come to fruition for both of her friends, who are now deliriously happy. But Libby’s attempt to quick-start the curse by proposing to her wrong-for-her boyfriend ends in a wild dash from the altar. She’s rescued by her friend Noah, the only person who understands her impulsive decisions--because he’s the same way.

Having spent most of his adulthood fleeing responsibility and commitment, Noah McMillan is finally ready to grow up. Of course, figuring out how is still a work in progress. When he realizes he’s in love with Libby, he flies to Kansas City to put a stop to her wedding. But Libby’s already pulled a runaway bride. Eager to cheer her up and prove that he can be the man she deserves, he takes her on a madcap car trip that will bring them all the way to the City of Sin.

In Vegas, those who risk it all either win big or lose everything, so what will happen if Libby and Noah take a gamble on love?

She firmly believed in living life to the fullest.

Ironically enough, the fact that she was now preparing to walk down the aisle toward a man she didn’t intend to marry was the first practical choice she’d consciously made, even if no one else realized it. Especially her two best friends.

“Libby,” Megan gushed, staring at Libby’s reflection in the mirror. “You look gorgeous.”

That was the part that shook Libby’s faith in her plan. Why was her wedding going so perfectly?

Blair put her hand on Libby’s arm and stared into her eyes in the reflection. “I confess, when you called last month and told me you were marrying Mitch three days before your thirtieth birthday, I had my doubts. I thought this might be some scheme related to that stupid wedding curse, but I’m happy I was wrong. Mitch seems like a great guy.” She cringed. “Even if he’s gone a little overboard with the football theme.”

Libby gave her a weak smile. “He is pretty great.” There was no denying it. Mitch was a fantastic guy in social situations. Of all the many boyfriends who’d come and gone in the past fifteen years, he was the only one who was both fairly dependable and accepting of her quirkiness. He even tried to understand her close friendship with Megan’s brother-in-law, Noah McMillan, which was more than she could say for Megan and Blair. That had to count for something, right?

But something was
missing
with Mitch. It hadn’t really mattered at first. She’d never intended to marry him. It hadn’t taken her long to figure out that the woman in his life would always take a distant second to his sporting activities. But she’d needed a date to Megan’s wedding, and then Blair’s, and the fact that her friends kept
expecting
her to break up with him, that they were always so utterly
shocked
she was still with the same guy, started to chafe. And so she stayed with him, at first wanting to save face and prove she wasn’t as flighty as they thought. Then, because she had seen the curse come to life with her friends’ weddings, and she fully expected it to do the same with hers.

Back when they were kids, the friends had made a pact to find husbands before their thirtieth birthdays. They’d formed the agreement while in line to see a fortune teller, and mere moments later, Madame Rowena had assured them they would keep the pact, but their weddings would be disasters and each of them would marry someone other than their intended. The curse. Only Libby had taken it seriously, but there was no denying that Megan and Blair had both gotten married before their thirtieth birthdays, and neither of their husbands were the men who’d originally proposed to them. And God knew, the days leading up to their weddings had been filled with disaster after disaster.

“In a week or two, maybe Garrett and I will have you both over for dinner.”

“Listen to
you,
Blair Hansen-Lowry,” Megan gushed. “Dinner parties with other couples? Marriage definitely agrees with you.”

The normally hard-assed Blair actually blushed. “Now that Garrett has moved to Kansas City and we’re starting our own practice . . .” Her blush deepened. “I just never expected to be so happy.” Then a mock scowl crossed her face. “If you ever repeat that to anyone, I’ll deny it.”

Megan gave her a teasing grin, but she knew better than to make a big deal of their friend’s uncharacteristic sentimentality. “Just think. When Josh and I move into our house in Lee’s Summit next month, all six of us can hang out together. It’ll be like old times.”

Libby had to admit, Blair looked happier than she had since high school. The curse had changed her life—and Megan’s—for the better.

So what in the hell was Libby doing wrong? Staring down at her bare left finger, she tried to keep from wringing her hands. Because she’d never planned to walk down the aisle toward him, she’d refused to let Mitch buy her an engagement ring. She’d bought two cheap wedding bands at a superstore to avoid suspicion. The best man now had them in his pocket.

The door to their room opened, and Josh McMillan, Megan’s husband of five months, poked his head in the room. “Hey, girls.”

Megan glanced up in surprise. “Josh, what are you doing here? Why aren’t you seated?”

Libby looked at him with a hopeful expression. Since Mitch had a tendency to tune out anything that wasn’t directly related to the Arkansas Razorbacks or the high school football team he coached and the school where he taught phys. ed., Libby had put Josh in charge of making sure the groom’s side of things ran smoothly. Perhaps this was what she’d been waiting for. Josh walked through the threshold and shut the door behind him.

“Mitch didn’t show?” She tried to keep the excitement out of her voice.

His eyes widened, then he shook his head. “What? No. Nothing like that. Mitch is in the church office watching the Arkansas football game.”

Figured. “Then what’s the bad news?”

He grimaced, casting a glance at Megan, then back at Libby. “I’m sure you’re wondering why we haven’t started yet . . .”

“You mean it’s not because Mitch doesn’t want to miss the end of the game?” Libby asked wryly.

“Not entirely.” He looked concerned. “It’s because we’ve been waiting on one of the groomsmen to arrive.”

There were only two groomsmen, and she could account for the best man, having seen Mitch’s cousin only a few hours earlier. That left one person. Josh’s brother. “Is Noah’s plane late?”

She waited for him to continue, trying not to get upset until she had all the facts.

The blood rushed from her head. “What? Why not?”

“Libs, I don’t know. He said something about Donna needing him this weekend.”

His girlfriend of
four weeks?

Back in June, Libby and Noah had become instant friends in the lead-up to Megan and Josh’s circus of a wedding, and the two had schemed to make sure the new couple’s marriage was legit. Their friendship had grown closer over the following months, and Noah had quickly replaced Libby’s two best friends as her closest confidant.

Noah was a notorious womanizer and Libby was known for her serial dating. Their relationship confounded everyone they knew. It was so unlike them, but then, maybe that was why it worked. It had only seemed natural to include Noah in the wedding party. After all, Mitch hadn’t minded.

But he’d suddenly decided not to come? Just on a whim?

What the actual hell?

Josh gave her a sympathetic look. “Libby, I’m sorry. I warned you he could be . . . unreliable.”

It was true. But Libby had never seen that side of Noah. Somehow she’d thought their friendship had changed him. It had definitely changed her.

Libby put a hand on her hip and narrowed her eyes at the innocent McMillan brother. “Let me get this straight. He agreed to be in my wedding, then he decided not to come because his girlfriend of
four weeks
has something she wants him to do?”

In a show of solidarity, Megan crossed the room to her husband and placed a hand on his arm. “Josh has told me stories of Noah’s epic fails in the past, but he hasn’t acted like this since I’ve known him. And he’s taken on so much responsibility with the merger of Dad’s company with Josh and Noah’s . . . Josh really
did
think he had changed.”

Libby wiped at the tear falling down her cheek. This wedding might not be real, but Noah still should have been here for her. The amount of grief she felt over his absence caught her by surprise.

But what did it matter if they were short a groomsman? The wedding wasn’t going to take place anyway. After all, there was no way that the curse would strike for both Megan and Blair and miss her. Her knight in shining armor—her one true love, her soul mate—would show up at any minute to sweep her off her feet and marry her before her birthday on Tuesday.

Only she had no earthly idea who he might be. The only thing she knew was what the lines on her palm told her—he was creative and would shower her with the love she’d longed for her entire life.

A cold sweat broke out on her forehead. What if this didn’t work?

“What do you want to do?” Blair asked, her jaw set. She’d barely tolerated Noah in the past, so these shenanigans weren’t bound to make her any fonder of him.

One hundred people were sitting in that church, waiting for her to walk down the aisle.

The Pale Criminal by Philip Kerr
Her Ladyship's Girl by Anwyn Moyle
Eye of the Cobra by Christopher Sherlock
Love on the Run by Zuri Day
Rocked with Passion (A New Adult Rockstar Novel) by Lacroix, Lila
Dusk (Young Adult Paranormal Romance) by Amy Durham
The Low-FODMAP Diet Cookbook by Sue Shepherd
The Spy Who Saved Christmas by Marton, Dana
Much Ado About Nothing by Jenny Oldfield
Stone Dragon (The First Realm) by Testamark, Klay
Our partner